Not Final! (1941) and Victory Unintentional (1942) comprise a rare morsel of an Asimovian Old Solar System.

Harlei:  If only there had been more like this duo!

Zendexor:  Never mind; let's be grateful for what we have.  By and large, Asimov wasn't the sort to provide material for our site, but within his enormous output one can dig out the occasional OSS gem...

Stid:  A monochrome gem, I'd say.  Colourful and sensuous evocation was never his strong point; nor was action.  He was an ideas man.  It's no accident that his science output exceeded his science-fiction output.

Harlei:  Head him off this track, Zendexor.  You know how to deal with him.  Explain to him that "monochrome" doesn't mean "bloodless".

Zendexor:  I will.  Stid, you're forgetting that ideas include emotions, ideas involve emotions - and as for action: well, what is action but the result of emotion?  We act out of hope and fear.

As do the scientists in Not Final! 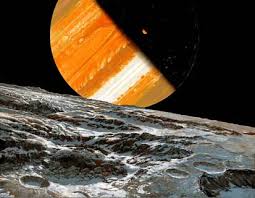 "...For twenty-five years here on Ganymede a little group of men have worked their hearts out trying to make sense out of the static-ridden, gravity-distorted set of variable clicks in our radio apparatus, for those clicks were our only connection with living intelligence upon Jupiter..."

The hope, that their efforts to make contact might succeed, turns into the fear that success may have meant disaster.

"...Their last message was this, word for word - 'Jovians are the masters.  There is no room for vermin.  We will destroy you immediately.'  I doubt if there was any animosity in that message - simply a cold statement of fact.  But they meant it."

"Why did man exterminate the housefly?"

"Come, sir.  You're not seriously presenting an analogy of that nature."

"Why not, since it is certain that the Jovian considers us a sort of housefly - an insufferable type of housefly that dares aspire to intelligence."

Orloff made a last attempt, "But truly, Mr. Secretary, it seems impossible for intelligent life to adopt such an attitude."

And now comes the punch - actually almost a real punch, insofar as for a queasy moment I almost wondered if Mr Secretary's reply might conceivably, one day, turn out to be reality rather than fiction:

"Do you possess much of an acquaintance with any other type of intelligent life than our own?  ...Do you feel competent to pass on Jovian psychology?  Do you know just how alien Jovians must be physically?  Just think of their world with its gravity at two and one half Earth normal; with its ammonia oceans - oceans that you might throw all Earth into without raising a respectable splash; with its three-thousand-mile atmosphere, dragged down by the colossal gravity into densities and pressures in its surface layers that make the sea bottoms of Earth resemble a medium-thick vacuum.  I tell you we've tried to figure out what sort of life could exist under those conditions and we've given up.  It's thoroughly incomprehensible.  Do you expect their mentality, then, to be any more understandable?  Never!  Accept it as it is.  They intend destroying us.  That's all we know and all we need to know."

Stid:  Actually, there is one more thing the human race needs to know...

Zendexor:  Right - the all-important question: can the Jovians make good their threat?  The rest of Not Final! is a fine exhibition of Asimov's skill in bringing scientific and technical inquiry to life - linking science to a life-and-death question and the emotions stemming from that question.

Hope - that the terrifying Jovians can be confined to Jupiter.  Fear - that this will prove impossible.  That's plenty enough to carry the story along!

And it ends on a note of exquisite dramatic irony.  One final sentence beautifully knots together the theme, that what seems like good news can actually be very bad news indeed; that if a thing is achievable by us, it's also achievable - alas - by them...

Harlei:  The achievement being the force-field, a strong enough force-field to contain Jovian pressures inside a space-ship, and so get them off Jupiter, to create havoc and destruction through the Solar System - that's what it all boils down to, so now let's get on to the next story, the bit I really like, the descent onto the giant planet itself, to find out what the psychopathic Jovians are up to and how close they are to achieving escape from their gravity-well.

I just love the way the expedition is organized.  Humans can't go, of course, so we send robots.

The ZZ robots were the first robots ever turned out by the United States Robot and Mechanical Men Corporation that were not even faintly human in appearance.  They were low and squat, with a center of gravity less than a foot above ground level.  They had six legs apiece, stumpy and thick, designed to lift tons against two and a half times normal Earth gravity.  Their reflexes were that many times Earth-normal speed, to make up for the gravity.  And they were composed of a beryllium-iridium-bronze alloy that was proof against any known corrosive agent, also any known destructive agent short of a thousand-megaton atomic disruptor, under any conditions whatsoever.

To dispense with further description, they were indestructible...

Stid:  Well, that's realistic enough; assuming a solid-surface Jupiter, a probe would have to be designed that way...

Harlei:  But what I like is the way they don't know their own strength, those good-natured, blundering, apologetic robots...

Zendexor:  Or rather, they don't realize the impression that their strength will make upon the Jovians, who inevitably jump to the wrong conclusion about what humans are like.  Yes, ZZ One, ZZ Two and ZZ Three are likeable heroes.  Heroes in that they save the situation, but they do so inadvertently, hence the title, Victory Unintentional.

Jovians drive up in ground vehicles to attack the robots with various weapons as soon as they have landed.  The impervious robots take an amusingly long while to understand that this behaviour is intended to be hostile.

...Heat radiation ceased, and other instruments were brought to the forefront and put into play.  Several capsules fell at the feet of the watching robots, dropping rapidly and forcefully under Jupiter's gravity.  They popped open and a blue liquid exuded, forming pools which proceeded to shrink rapidly by evaporation.

The nightmare wind whipped the vapors away and where those vapors went, Jovians scrambled out of the way.  One was too slow, threshed about wildly, and became very limp and still...

There was a pause, and then ZZ One, whose greater simplicity led at times to an increased directness of thought, said heavily, "It might be that these strange creatures in a rather childish way are attempting to destroy us."

And Two, struck by the suggestion, answered, "You know, One, I think you're right!"

Harlei:  It gets a good bit more amusing later on, especially with the encounter with the ammonia-lake dweller...  but I hasten to add, it's not just slapstick.

Zendexor:  Right - or maybe we should say, it's "awesome slapstick".  This is a convincing Jupiter, in its own terms, and Asimov's knowledge of science, and his gift for bringing ideas to life, make his sketchy Jovians impressive in their context.

A group of Jovians were advancing in curiously uneven fashion, but no amount of careful watching could determine the exact method of their locomotion.  How they used their tentacles was uncertain.  At times the organisms took on a remarkable slithering motion, and then they moved at great speed, perhaps with the wind's help, for they were moving downwind...

You wouldn't expect much more in the way of clarity, underneath 3,000 opaque miles of atmosphere... even with the gamma-ray perception which the ZZ robots use to pierce the pitch darkness of the Jovian surface.  Which brings me to an interesting point, incidental to the main point of the story:

It concerns a fascinating distinction between two forms of sight.

We see by energy-radiation; the Jovians in the story see by "mass-sensitivity".  (This seems to me like the "sense of perception" which some races are said to have in Doc Smith's Lensman series.)

Not, as I say, essential to the story - but an example of its richness.