an approach
to
world-building
by
robert gibson

We readers - my type, anyhow - are a greedy lot: we all crave a never-ending feast of saga, in which our imaginations can browse amid the characters and contingencies of interwoven scenes and beings.  We desire, in short, a world.

Preferably a world in which change can occur to a sufficient degree to make adventure meaningful, yet in which such change never amounts to some cataclysmic discontinuity wasteful of the cultural fabric.

A world, therefore, built to sustain an unending series of tales.

For a compulsive treat on these lines, you can't beat a multi-story planetary saga constructed on the lines of Barsoom, in which the overall hero is the planet itself.  Burroughs' verve and lavish invention enabled him to achieve an effect by which Mars, though a far smaller planet than Earth, seems immense and open-endedly afire with possibilities for adventure.

Most remarkably, he did this while allowing his characters facilities for fast transport which, according to logic, should have effectively shrunk his world in double-quick time.  My reading of A Fighting Man of Mars leaves me with the impression that Barsoomian flyers can (if not obstructed by hostile action) traverse the planet in little more than - or even less than - a day, depending on which model of flyer you possess.  Now, vastness and easy transit just don't mix, so how the dickens did ERB get away with it?  A hard trick to pin down.

When, back in 1977, I began to build my own fictional planetary world, I had the sense to realize that I was no GAWI wizard like ERB and therefore could not get away with his vastness-plus-speedy-transit trick.  So my planet would have to derive its adventurous scope from being literally big. 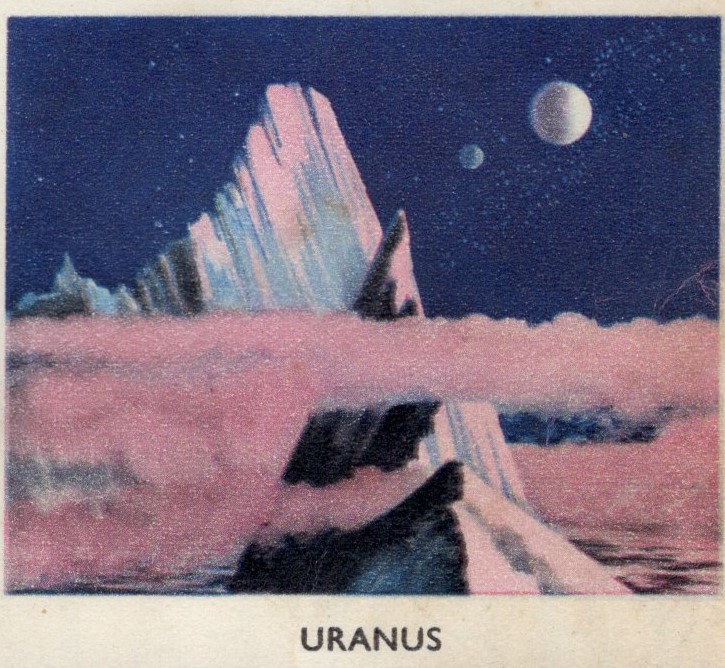 Fortunately for the budding fictioneer, immense tracts of real estate lie ready for the taking in the outer solar system.  So much attention has been focused on Mars and Venus that the giant planets remain under-exploited.  In particular, Uranus, which had hardly been bagged by anyone, floated out there waiting for me... and since the age of six I had had my Pictorial Encyclopaedia's haunting illustration of Uranian mountain peaks streaked with glowing cloud to inspire me.

The seventh planet has no roots in our cultural imagination to match those put down by Mars, yet its very obscurity, and the ancient "sky god" echo that lingers in its name, plus that marvellous picture, were enough to impel me to pronounce (in Brigham Young fashion), "This is the place".  So here was my world, and it was really big.  No chance whatsoever of crossing it in a day.  Ooranye - the native name for Uranus - remains four-fifths unknown.  That was my first key departure from the Burroughs scenario.

The second main departure was that my heart wasn't in combat between man and man.  I couldn't have a hero like John Carter.  Admittedly, all my Uranians go armed, and they are ready to fight rebels and invaders, but such occurrences are regarded as exceptional, rather than the normal order of things as is the case on Barsoom.  Instead of being kept in trim by internecine warfare and assassination as are the red-skinned Martians, the grey-skinned Uranians are pitted against the inexhaustible mysteries of their giant world.  What excites me about the Ooranye that exists in my mind is on the one hand its eerie twilit "northern-ness" (to borrow a term from C S Lewis) and, on the other hand, a different lure, the opulent beyondness that blooms in the tales of Clark Ashton Smith.  Formidable challenge to combine the two - but since that's the vision, what else can I do but aim?

The field is inexhaustible, and though I have renounced Burroughs' bellicosity, the powers that lurk in the untamed Uranian wilderness leave scope for violence and terror enough.  Indeed it would be wrong, in my view, to draw too stark a practical contrast between warlike Barsoom and peaceful Ooranye.  Life-insurance would be hard to obtain on either world.  The difference is in the tone.

I'd like to mention here an early instance of when I got the tone wrong.

In my first years of world-building enthusiasm I wrote a Uranian novel, at first titled Uranian Skies, the name later changed to The Fortunate World.  It's gathering dust in my house and I have no plans to resurrect it.  It recounts, among other things, a war - the Nemyuran War, in which a crazed cult in one city leads to an attempt to conquer Syoom, the civilized area of Ooranye.  What gives me a crooked smile when I think of it, is that in the first version I was so influenced by ERB that I had some Uranians looking forward to "loot"!  A notable example of author and creation both being out of character.

Not that I'm being judgemental, you understand.  Looting is fine for some yarns and some yarners.  I wouldn't wish to ban the practice.

the spur to action

Fortunately the influence of ERB did not determine policy in other aspects of plotting.  Right from the start I wanted to get away from the princess-rescuing motivation which acts as the spur to so much Barsoomian adventure.  I wanted adventure undertaken for other reasons, if only because the supply of princesses could not possibly meet the demand.

That got me started on the idea of Uranian cartography: a cultural habit that required a constant flow of data on the perils to be encountered along routes through the wilderness between one city and another.

That in turn led to the concepts of Syoom and Fyaym, statistical embodiments respectively of civilization and the beyond.

I also wanted, and yet did not want, Barsoomian-style rulers.  Monarchies are dramatically good for stories, but mad jeddaks are the wrong style for Ooranye, so I constructed a political system which relied on a quality of "renl" that could be defined as "being in the right place at the right time".  A sort of existential knack for weaving one's way through the traffic of life.  You either had it, in which case you were Noad or Sunnoad material, or you didn't.  Such leadership is self-selecting, while failures are self-revealing and self-destroying.

the depth of recorded time

Another point which arises, by contrast or reaction, from Barsoom: I wished to satisfy any reader's hunger for a proper time-line with dates: a hunger which certainly existed in me (how often have I wished that ERB could have been as chronologically meticulous as Tolkien!) and which therefore might exist in others.

One notion led to another.  At first, I envisaged 26 ages of Uranian history, each named after a letter of the alphabet.  But later the awareness stole upon me, of how ridiculous it was to suppose that during the past million years the denizens of the seventh planet would have been employing the Terran Roman alphabet to name their eras; so I changed the total from 26 to 92, and based the list upon the Periodic Table.  From there I was prompted to invent a hard-wired affinity for that table in the Uranian psyche; thence sprang a teleological motor of events which was bound to manifest history in those 92 eras; thence came the concept of the eomasp to explain how the transition between one era and another was marked... the planet's bioluminescent rhythm juddering with the impact of emotion-waves linked to great events (for which the reader is referred to a story in Vintage Worlds 1).

The events required to outline all these recorded eras entail an accumulation of commitments: stories must stay consistent with the context not only of contemporary but also of past scenes, so that I must be careful to avoid anachronistic howlers such as having a Ghepion in a Zinc Age tale, or referring to spotlit foregrounders before the Praesodymium.

Constricting in one sense; liberating in another.  Sure, it becomes necessary to do a lot more work in order to get it all right, but the work itself can give one ideas, and besides, if one is able to concoct not only contemporary but also historical fiction in one's invented world, the enlarged scope ought to add an extra dimension of artistic realism.

Where, though, did I get my theme of foregrounders versus backgrounders - the protagonists contrasted with the bit-players of Uranian life?  Some link may possibly be traced between this hypostasis of plot-lines on the one hand, and, on the other, the renl-talent possessed by Uranian leaders.  I'm not precisely sure - to find a definite answer would require an archeological dig into the murky depths of my mind - but I can tell an excuse when I whiff one.

For the fact is, wherever the idea came from, its advantages are evident to me as author: I don't have to explain why a few make their special mark while the many are content just to keep the culture ticking over; I don't, therefore, have to calculate how so many people can stay happy when only relatively few Wayfarers can enjoy the spotlit fulfilment of protagonist status with its glittering prize of adventure.

Otherwise, you see, I would need to figure out how the culture of Ooranye could avoid boiling over with sheer excitation, given the requirements of cartographic Wayfaring.  I dare say other writers or readers may see this as a non-problem, but my hunch is that the foregrounder-backgrounder distinction feels right.  If you want to work out a more purely socio-economic explanation, do feel free...

World-building is a fascinating occupation not least in the way its failures can become successes, early mistakes providing grit for the formation of later notional pearls.  The example given above, when I felt obliged to alter the number of eras from 26 to 92, is a case in point, because -

Like some vestigial appendix, the 26 were determined to live on.

As a consequence the redundant idea of 26 eras, one for each day of the alphabet, wasn't just thrown away; it was transformed into the sub-category of 26 'major eras' out of the 92.

26 long eras.  Leaving 66 short ones.  This forced me to think of reasons why the 66 shorter eras had to be truncated.  This in turn compelled me to dream up yet another lot of crises and catastrophes.  All of which had arisen in the first instance merely out of a need to keep up with the wrong turnings and inconsistencies in my own work... and so the business goes fruitfully on. 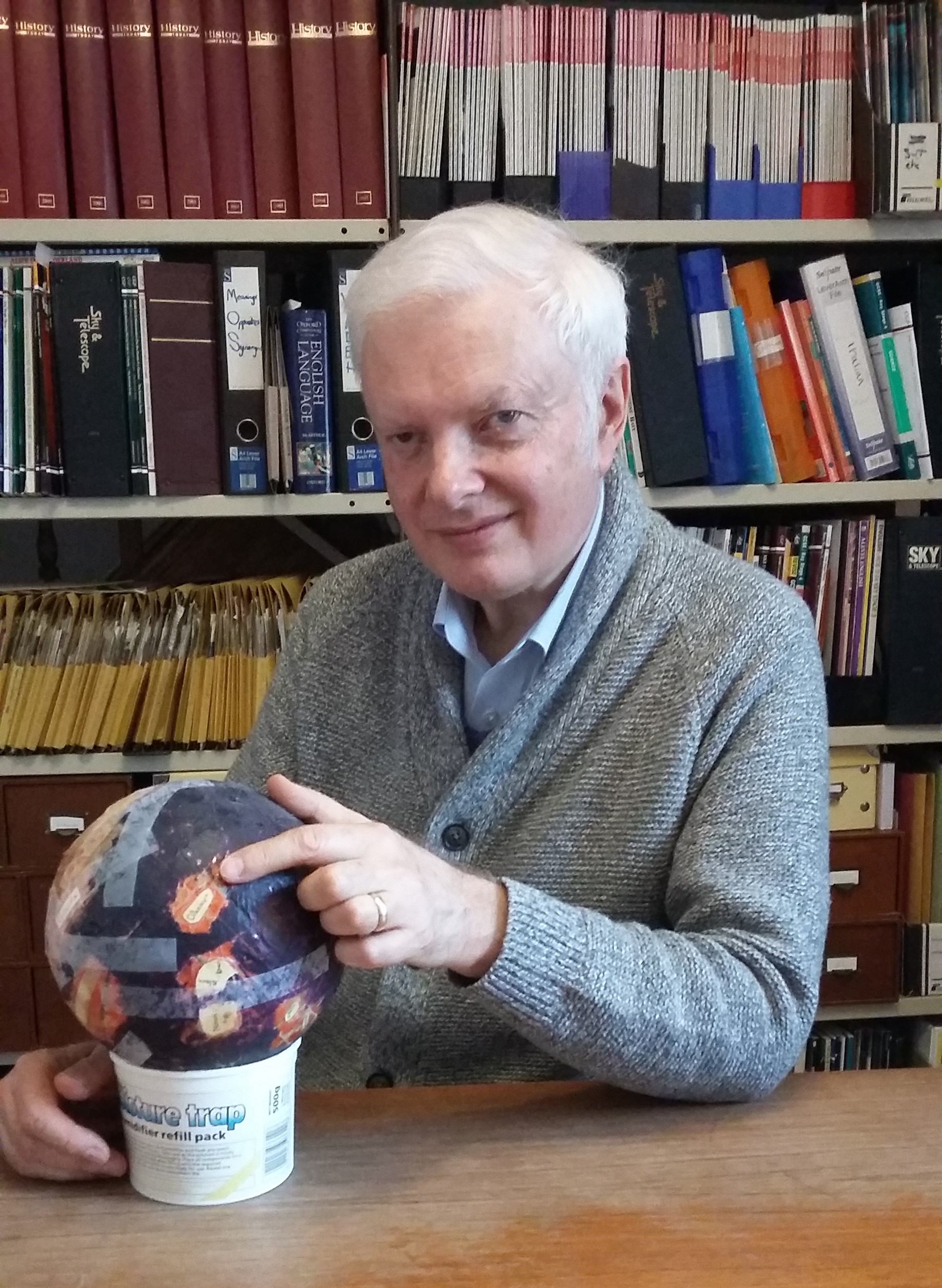 Pointing to the city of Olhoav on an annotated football

It's fuelled not only by false starts but by practical obstacles.  One of these concerns geographical reference.  I wanted a globe of Ooranye.  Easy enough in itself: just get a football and paint boundaries on it and tape lettered signs on it.  But what of co-ordinates?  How could I mark accurate lines of latitude and longtitude on a football?  Answer: I couldn't.  So it turns out that my Uranians have never thought of lines of latitude and longitude.  It has simply never occurred to them.  It's one of their mental blank spots, like the Martians in Simak's Huddling Place never thought of medicine.

As a substitute, the wayfarers of Ooranye have compasses attuned to lodes in their cities.  It's a cultural rather than a geomagnetic system - the lodes being specific to a city.  (What force governs them, I have no idea.)

My advice to world-builders, then, is to bear in mind that really there's no such thing as a setback!  Whenever you meet what seems to be a setback, seize upon it gleefully and shelve it alongside the others in your valuable hoard - each one of them a slow-cooking, disguised free lunch.