secret lords of the twilight belt:
clark ashton smith's
THE IMMORTALS OF MERCURY

One of Clark Ashton Smith's most enthralling tales.  It appeared in 1932.  They don't make 'em like that any more.  Ah well, at least we have this one...

This story is so good that I keep imagining I've seen an illustration to it, when actually I haven't.  The illustration is in my own mind.  Quite persistent...

Zendexor:  A tall pale figure, one of the Oumnis, appearing like a sudden spectre amid the steam of Dayside Mercury at a moment when the Earthman, Cliff Howard, is about to perish from the heat.  Howard is delirious with suffering, on the verge of a gulf: 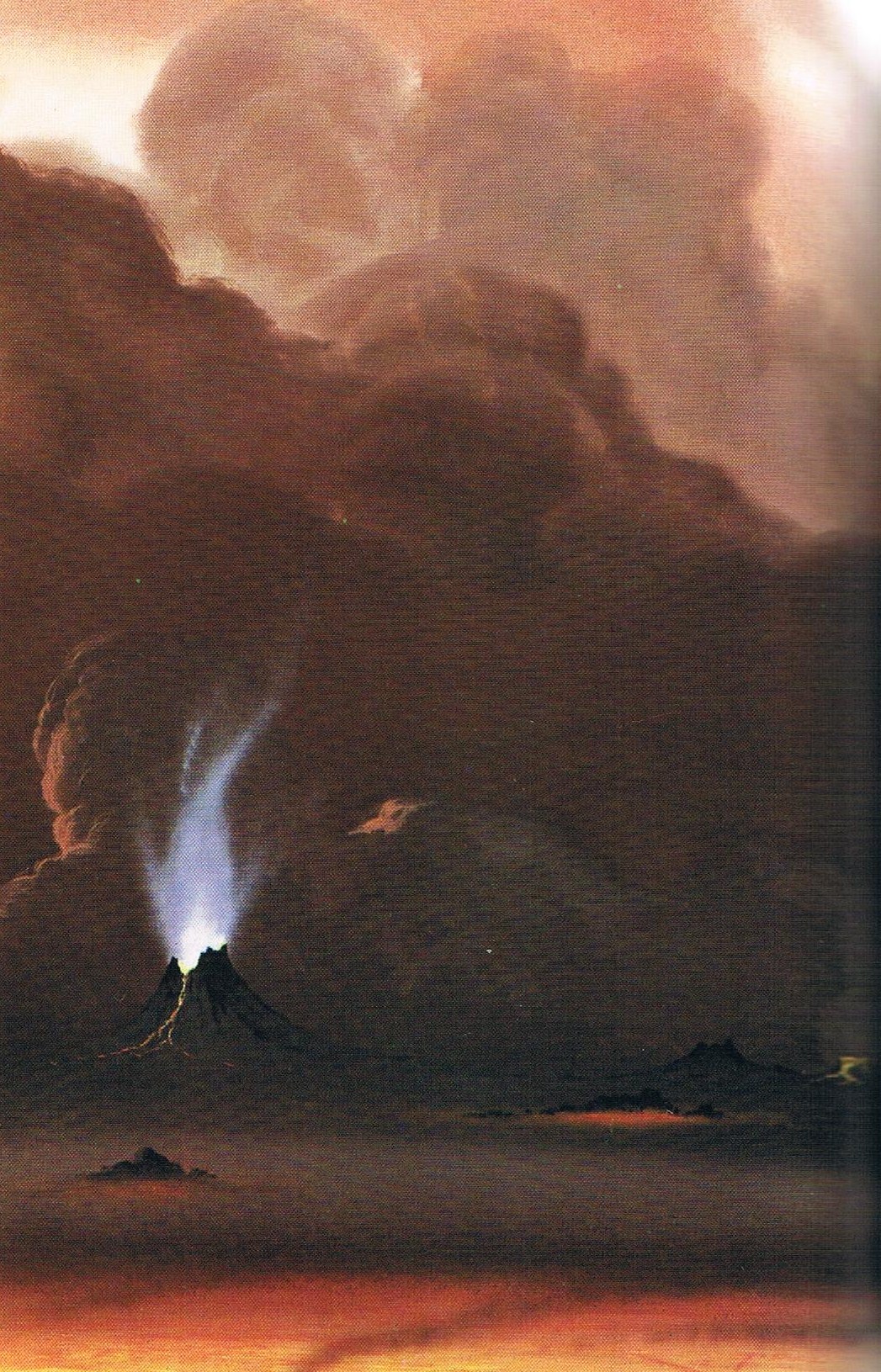 Then, from the burning mist, the hooded forms of white and shining devils appeared to rise up and seize him, as if to receive him into their unknown hell.  He saw their strange, unhuman faces; he felt the touch of their fingers, with a queer and preternatural coolness, on his seared flesh; and then all was darkness...

Howard returns to consciousness, of course, as a captive of the Mercurians.  He's in for some fascinating and terrifying experiences, but that's to be expected - he is, after all, a member of the first-ever human expedition to Mercury.  This is the Old Solar System and frontiers really are frontiers.  Planets aren't first reconnoitred to death by unmanned space probes before humans dare to set foot on them.  On the contrary, there are no intermediate stages between Earth-bound telescopic study and actually going there in person to have a look.  The OSS is not for the faint-hearted.

Harlei:  Is that what you like so much about the story - that it portrays the mucking-in hands-on approach to exploration?

Zendexor:  That's only part of it.  The pulp literature of the time was full of such fast-and-loose action adventures.  It's the way things were done.  No, what makes the Smith tale a special one is the special Smith magic, and if I could pin that down, I'd have a crack at performing the trick myself.  Language, of course, is the key.

Zendexor:  Critics' minds are strange things - I speak as a critic.  As a matter of fact I remember when, initially, I myself did not "get" Clark Ashton Smith.  I thought his stuff creaky and depressing - sinister in a stifling rather than in a haunting sense.  That, however, was long ago.  Since then my opinions have swung around 180 degrees!  Some change in perception made me see - fortunately - that this was the big stuff.

Stid:  Bigger than most of its rivals, I suppose you mean.  In which case, it should be possible to isolate the key quality, by comparison...

Zendexor:  That is a good idea but it will take time and research.  Let's eschew comparisons for the time being, and just concentrate on the qualities of this story alone, as considered in itself.

First, the words and phrases which for some reason are stuck in my mind: "Cliff Howard's first sensation... well-nigh insufferable heat."  That's from the first sentence.  Then, scattered throughout the story, "scrubby jungles", "scarcely practicable", "touched with Earthly gloating", "super-scientific people", "whose territories you have begun to arrogate", "half-disdainful", "squirmed nauseously beneath his heel", "Roccalim", "mandates of the Shol", "mouffa", "in certain biologic tests".

Stid:  Pardon me, but though I like "touched with Earthly gloating", this list as a whole doesn't seem exceptionally brilliant.

Zendexor:  That's because you're not meeting the quotes in context; I'm just telling you about the story's power to cause words to stick...  and meanwhile the mind is bombed with image after image...  the vats of mouffa; the tentacular Roccalim; the dripping caves; the gloating face of Agvur; the televisual phantom of the Shol, Ounavodo; the heel of the Mercurian protective suit that gets caught in the closing cavern door; the phosphorescent fungi; the stunted Dlukus near the beginning.

And then there's the shape and significance of the story-line.  When captured, you don't protest.  You know it will do no good.  Instead you watch for your chance.  You survive the power-play, the cat-and-mouse charade with the Roccalim.  (What a genius for names Smith had!)  You make your break, you get a certain distance, and, though you don't escape with your life, you at least die free...

Harlei:  A grim tale, from that point of view.  So would you class it among Smith's horror stories?

Zendexor:  Actually, no.  I'm struggling for the right way to categorise it.  In a metaphorical sort of way I see it as a "black and red" story.

Stid:  I sense one of your bouts of synaesthesia coming on.  What's metaphorical red and black when it's at home?

Zendexor:  Allow me a moment, please, while I sniff out the meaning of my own words...  The black, I suppose, comes from the darkness of underground...  nearly all of the story takes place underground.  Some areas are well lit, but then at a crucial moment the hero succeeds in extinguishing the lights...  no, there's more to it.  The black is also the metaphorical dark of the unknown.  As for the red -

Harlei:  I know: it's the luridly glowing vats of molten mouffa.

Zendexor:  Logically, yes, but also, it's the red of Mercury, or of the planet's hot side, which (courtesy of the X-Ray power of a reader's imagination) stays in the mind no matter how far down through the crust the captive hero is brought.  He can no longer see the light of day, but we can.  I suppose that's why I'm not more disappointed than I am.

Zendexor:  Disappointed at the fact that most of the scenes are underground...  I prefer adventure above ground... but... er...

Zendexor:  It's just that what I'm about to say is going to sound fanciful and far-fetched.

Stid:  Er - could I have that in writing?

Zendexor:  Seriously, I mean really far-fetched.  Take this business of most scenes being underground -

Harlei:  But we're given sound reasons for that.  The Oumnis live underground to protect themselves from the Sun's rays and from the cold of Darkside.  And for the newer reason, that they want to stay hidden from humans.  Though locally their power is great, they know they can't match the people of Earth in numbers.

Zendexor:  All of which makes sense, but you don't get what I am driving at.  The problem - which is a problem I also have with another great Clark Ashton Smith story, the Mars tale Vulthoom - is that I keep reading it in the hope that it will be something else.  Something more.  Something that doesn't retreat underground but, instead, explores a rich surface culture, from city to city, from vista to vista.

Stid:  So - the "far-fetched" thing turns out to be your attitude as a reader.  Very strange, to read a story again and again (a story you must have got to know really well), hoping against hope that it will turn out different this time, that the words on the page will somehow change!  You're nuts, Zendexor.

Zendexor:  No, because I say all this merely to illustrate the mesmeric power of the story.  It isn't just "the words on the page".  It emits sparks of potentiality, shooting them off at all angles, so that you do feel its events to be contingent rather than inevitable.

Stid:  But what about your confessed dissatisfaction with it, your wish that the story turned out otherwise?

Zendexor:  Because it's already so good, I get greedy.  I want to know, for example, what the Oumnis were like before they built their underground realm.  What sort of culture existed on the surface of ancient Mercury...  It's worth thinking of these things because, you see, the Oumnis are real Mercurians. No let-down COMOLD explanation about remnants of an interstellar race, no ancient stranded colony distantly related to humans (as in Bob Shaw's Fire Pattern).  The Oumnis are Mercurian through and through.  (Or "Mercutians" as Smith quaintly calls them.)  This is the real stuff.

For a discussion of the Dayside episode, with Howard strapped to the heat-lizard, see the page on Brightside Crossing.

For an extract see Healed and captured by the savants of Mercury.

› The Immortals of Mercury