what to see on
ganymede 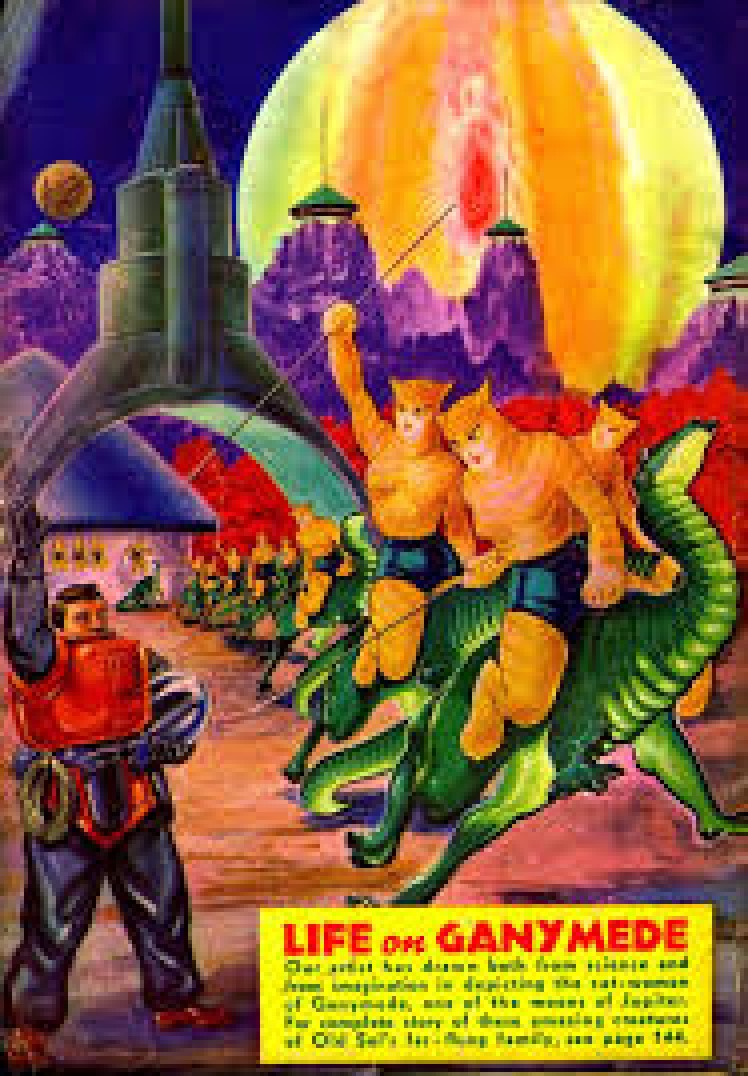 a murky maze on ganymede

...Tok led the way swiftly, doubling back toward the lower side of the bazaar.  Here was a section that Harrah never visited - the Quarter of the Sellers of Dreams.  Poetic name for a maze of filthy rat-runs stinking with the breath of nameless substances.  The sliding roofs were always closed and what few voices could be heard were beyond human speech.

They came to a house that stood by itself and the end of an alley.  It looked as though it had stood a long time by itself, the fecund weeds growing thick around the door, rooting in the chinks of the walls.

There was no light, no sound.  But Tok stopped and pointed.

After a moment Kehlin nodded.  With that gesture he dismissed Tok, forgot him utterly, and the aboriginal went with three loping strides into the shadows and was gone...

...We were on the move the whole time.  I still hadn't managed to take my merit badge tests and I hadn't done much better about getting in to Scout meetings.  There was just too much to do.  Building a pond, for example - Laguna Serenidad was being infected with plankton and algae but there weren't fish in it yet and it would be a long time, even after the fish were stocked, before fishing would be allowed.  So we did fish-pond gardening, Chinese style, after I got the pond built.

And there were always crops to work on.  My cover grass had taken hold all right and shortly after we moved in the soil seemed ready to take angle worms.  Dad was about to send a sample into town for analysis when Papa Schultz stopped by.  Hearing what we were about he took a handful of the worked soil, crumbled it, smelled it, tasted it, and told me to go ahead and plant my worms.  I did and they did all right; we encountered them from time to time in working the fields thereafter.

You could see the stripes on the fields which had been planted with pay dirt by the way the grass came up.  You could see that the infection was spreading, too, but not much.  I had a lot of hard work ahead before the stripes would meet and blend together and then we could think about renting a cud-chewer and finishing off the other acre and a half, using our own field loam and our compost heap to infect the new soil.  After that we could see about crushing some more acres, but that was a long way away...

We hoped to have a hive of bees some day and the entomologists on the bionomics staff were practically bursting their hearts trying to breed a strain of bees which would prosper out of doors.  You see, among other things, while our gravity was only a third Earth-normal, our air pressure was only a little better than a fifth Earth-normal and the bees resented it; it made flying hard work for them...

...Slowly, they continued down the mountain, reaching now and then a bleak plateau which wind and water had swept to glassy smoothness.  The flying mammals which always heralded the flood swooped overhead.

As they crossed one of the plateaus, above the roar of the wind they heard a loud beating.  A mammoth bird, jet black against the mountain, its two sets of wings flapping alternately at a spread of thirty feet, came toward them.  Flying the gale, it neared them quickly.  For a second, the men sat transfixed; then, wrenching themselves from the coma of fear, drew guns...

...the instant he had consumed in rescuing the girl had been enough for the thing to seize him, and he found himself battling for his very life.  No soft-leaved infant this, but a full-grown monster, well equipped with mighty weapons of offence and defence.  Well it was for the struggling man that he was encased in armour steel as those saw-edged, hard-spiked leaves drove against him with crushing force; well it was for him that he had his own independent air supply, so that that deadly perfume eddied ineffective about his helmeted head!  Hard and fiercely driven as those terrible thorns were, they could do no more than dent his heavy armour.  His powerful left arm, driving the double-razor-edged dirk in short, resistless arcs, managed to keep the snaky tendrils from coiling about his right arm, which was wielding the heavy, trenchant sword.  Every time that mighty blade descended it cleaved its length through snapping spikes and impotently grinding leaves; but more than once a flailing tendril coiled about his neck armour and held his helmet immovable as though in a vice, while those frightful, grinding saws sought to rip their way through the glass to the living creature inside the peculiar metal housing.  Dirk and sabre and magnificent physique finally triumphed, but it was not until leaf had been literally severed from every other leaf that the outlandish organism gave up the ghost...

the dying culture of ganymede

Other races have always held a feeling of pity for the Ganymedans.  Yet, in respect to material things, they are not to be pitied.  They are the richest race in the solar system, and if they had not insisted on cherishing dreams which, in their hearts, they must have known as futile, and if the slowly coming death of their race had not been looming above them, they would have known complete happiness.

Their government, as might be expected, was anarchistic.  They were such a closely unified people, with identical ambitions and hopes, that no other form would have worked as well.

Food was plentiful.  They had vast fields of several different types of vegetables which grew rapidly, and needed not even the tiny amount of sunlight they received.  There was a minimum of physical labor, since they possessed up-to-date, wholly automatic machinery.

They possessed television sets, a public library fed from book and magazine marts on the other planets.  They possessed two or three ships of ancient design, which maintained constant commerce with the rest of the solar system, freighting vast supplies of food exports to the markets, where, being considered delicacies by the inhabitants of the other worlds, they commanded fabulous prices.

As for religion, I doubt if they had one, unless it were one centering about their dreams of empire.

Carrist willingly showed me about the city, and even walked with me to the vast agricultural fields.  The city, in its prime, must have been huge…