man of the world
a foreshadow of earth
by robert gibson

(The first part of the novel is accessible on site - see the links under Contents.)

the ultimate earth-shimmer: before, during, after 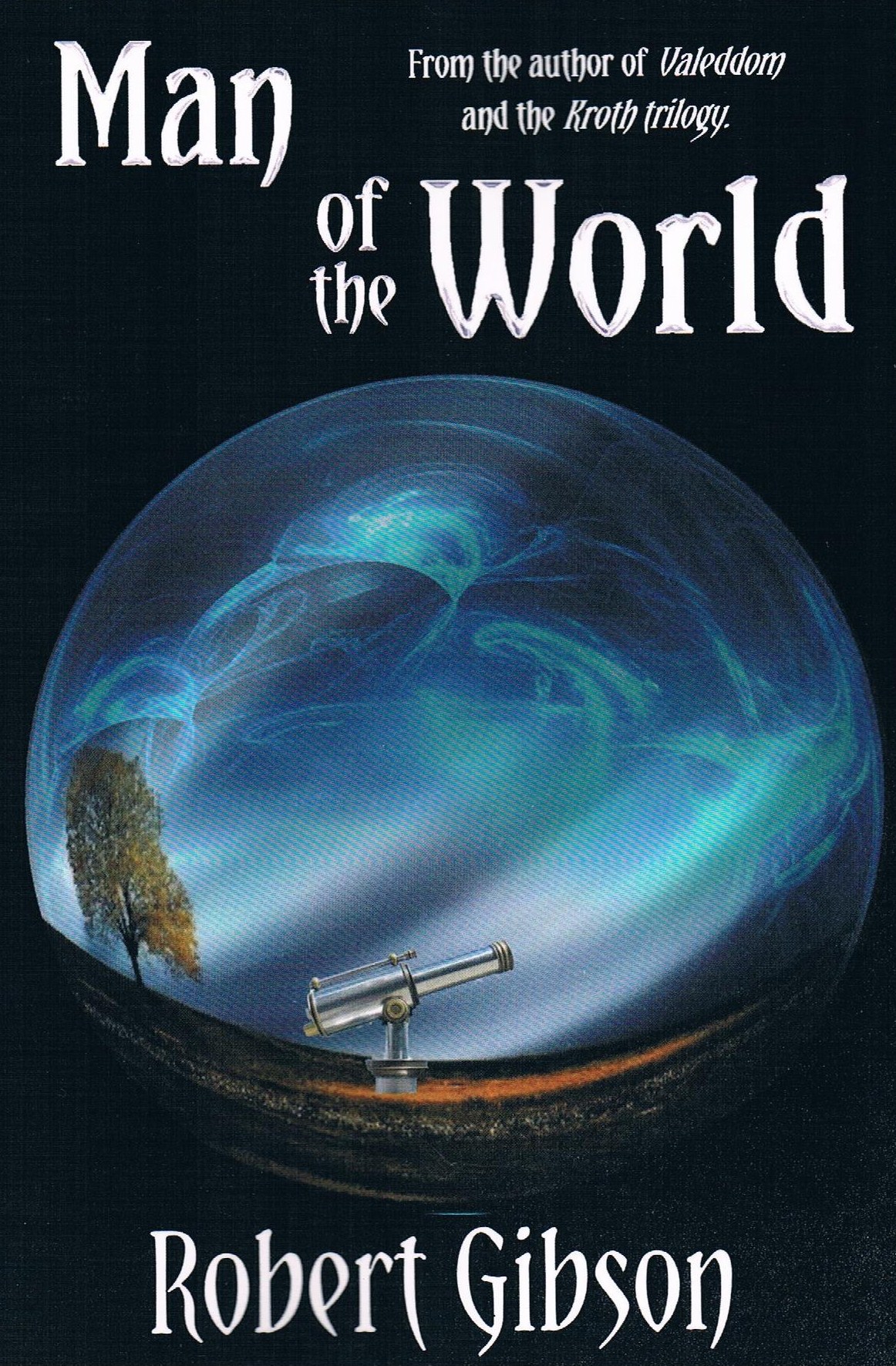 More than a mere parallel Earth, the world in which the hero lives through his Life is actually in a previous cosmos -

Harlei:  So - the most long-range Shimmer yet -

Stid:  Hey, are you all right, Zendexor?  "Lives through his life" - what kind of English is that?

Zendexor:  I haven't been hitting the bottle, if that's what you're wondering.  It's just that although Life is a big thing, covering the middle part of the book, and full of worldly incident, from birth to death, nevertheless it's a misleading scene; it's not what the "Lifers" think it is...

Stid:  Like Philip K Dick's Time Out of Joint or Heinlein's Universe.

Zendexor:  Right; it's a "world" which is actually not what it seems to the people living their Life in it.  There's the same idea of a limit, a kind of experimental enclosure, and of mystery outside that limit.

But in Gibson's book - which is much lengthier and more detailed than either of those other examples - we get to see and to know the outer reality before as well as after the hero leaves it to enter the enclosure.  We're effectively given three states: Before-Life, Life, and After-Life.  Each with its own interest and its own psychological atmosphere.

So what might have been a mere framing device becomes, instead, a full-blooded part of the tale.

Now, it's time for me to introduce a rare contributer, my imaginary Jungian female counterpart, Annima.  Hi, Annie. 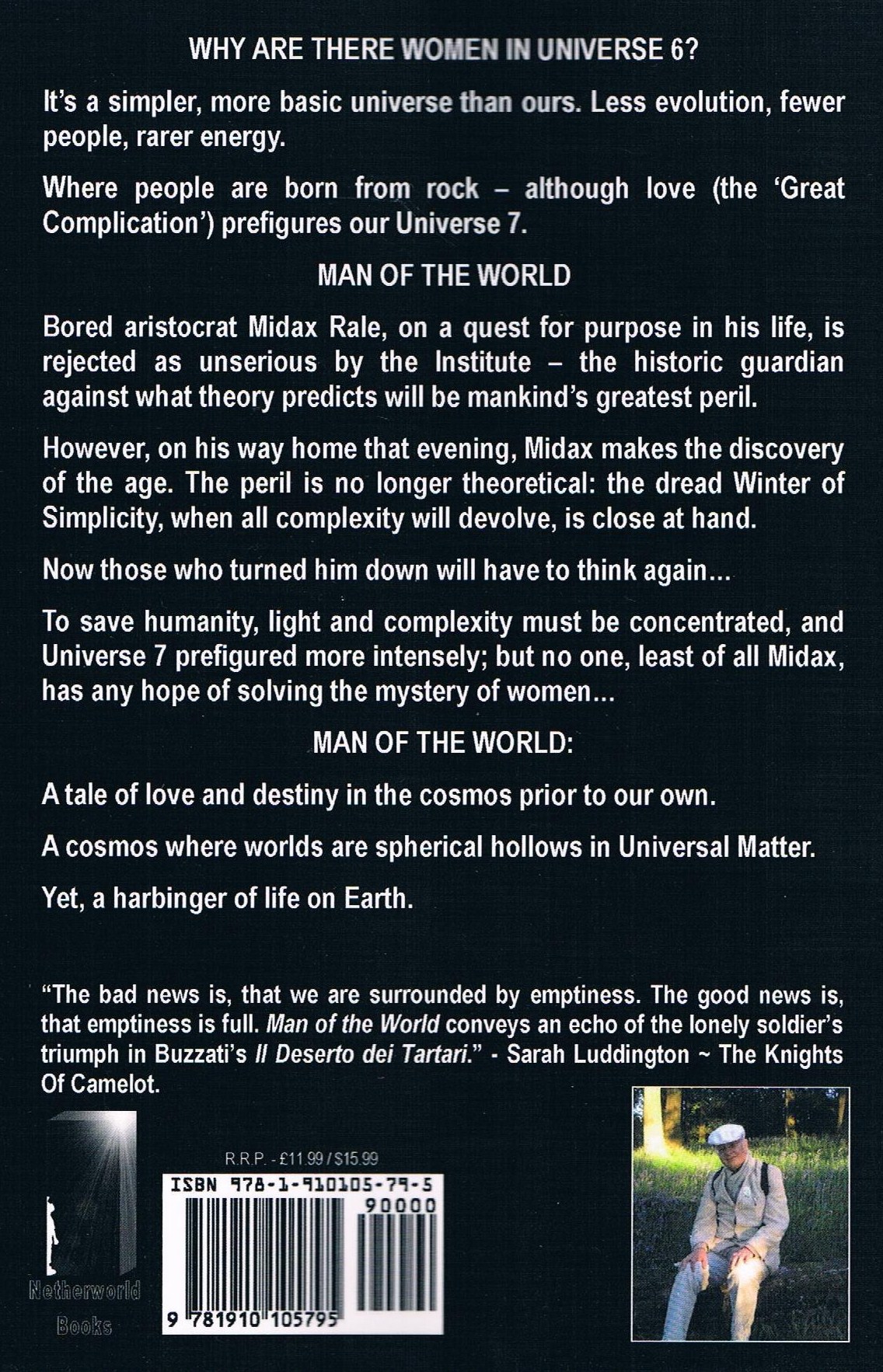 Annima:  Hi, yourself.  I know why you've summoned me from the shadows - you need help with the gender issue raised by Man of the World, do you not?  Nervous lest you say the wrong thing, aren't you?

Annima:  Well, fret not.  What Gibson is doing - in his apparent attack on Romance - is to avail himself of the science-fictional technique of looking at a familiar thing and say to himself, I won't take this for granted just because it's familiar; I'll see it as it really is - as amazing!

Zendexor:  Yes, and I suppose that as Damon Knight said of Heinlein, Gibson is "as happy as a pup in clover" at his discovery of an unexploited field ready for his attention.  We do take "falling in love" for granted.  But supposing we were all born from rock, and did not reproduce, and yet were still identifiable as men and women, and still fell in love - what then?  The mysteries of the heart would take on their full spiritual significance.  The Platonic doctrine, that the loved one is a soul-mate known from a different life, might be true.  And yet, as you say, the book is an attack on Romance.

Annima:  An attack on the damage it can do.  But not on the transcendent reality of it.  Really, the story affirms Romance, though it shows it can be a darned nuisance.

other themes and observations

Zendexor:  The physical phenomenon of Light plays a huge part in the story.

Stid:  More than that, I'd say.  More like a whole universe.  Ours, in fact; and that brings me to mention, Zendexor, that maybe we're in the Enclosure, now.

Zendexor:  You're obviously meant to wonder that.  The frisson seizes the reader more than once.  It's unavoidable.

Another theme I'd like to mention is that of historical re-enactment.  An official celebration of the 500th anniversary of an epic voyage, by a sort of Columbus and Vasco da Gama rolled into one, becomes, unexpectedly, a different kind of discovery, which eclipses the older achievement.

That marks the occasion when the people in Life begin to suspect the outer reality.

What I'm hoping, is that loads of readers will give each other this book for Christmas, and then give me a helping hand in the commentary on it, because there's such a darn lot to say.

Zendexor:  Well, the author did ask permission.  And besides, it's his way of honouring this friendly site.  And anyway he wasn't cheeky enough to put my name into his book...

Stid:  What do you think, Harlei - is Zendexor looking a bit disappointed?

In the author's own words:

Man of the World is set in the universe prior to our own.

In a sense it is a mirror image of ours. We live in Universe Seven, a space universe where worlds are globes of matter floating in the void.  By contrast, Universe Six is largely solid, with worlds as bubbles of space englobed by Outer Matter, like holes in Gruyere cheese.  Some of these bubble-worlds are linked by cracks in the Matter between them.

Contrasting universes - yet they have one thing in common:

Life is as rare and lonely in Six as it is in Seven.

In one of Six's bubble-worlds, a million-mile-wide cavity named Korm, lit like Pellucidar by a central sun, there exists a small oasis of life, Sycrest, and a city, Serenth.

The Serenthians are human, foreshadowing ourselves. But they are subject to different natural laws.

The key to life in Universe Six is a kind of geyser of energy known as the Fount, which is the source of Complexity. The people don't understand it much. They don't know that it's the pull of the future - that its ripple of anticipation explains, for example, the differences between men and women and the existence of romance, all an utter mystery for a people who don't reproduce but are born by being "complexified" from the rock.

All they know for sure is the rhythm, the waxing and waning of the Fount.  That familiar diurnal rhythm provides the Serenthians' equivalent of our night and day.

But in addition, there is a far more long-term, dire fluctuation.

A drastic waning of the Fount, every eon, brings about a Winter of Simplicity...

This is where the great foreshadowing of Earth comes in - the "Earth-Shimmer" of the tale.

For the Serenthians have built a huge training-box in which to defend themselves against the Winter. In that box, that emergency hothouse of energy, the next universe - ours - is prefigured, anticipated, in a big way...

Chapter 10:   The Banks of the Swenng

(For chapters 18-37 we must refer the reader to the published novel, available since 25th October 2016.  Publisher: Netherworld Books.  Order from Amazon, Waterstones or any good bookshop.)

For a comparison between Gibson's Earth-precursor and the trans-plutonian planet in Asimov's Nemesis, see the Gibson and Asimov on the Fullness of Empty.

› Man of the World