Man's science-fictional ventures into Space occurred long before the real one... 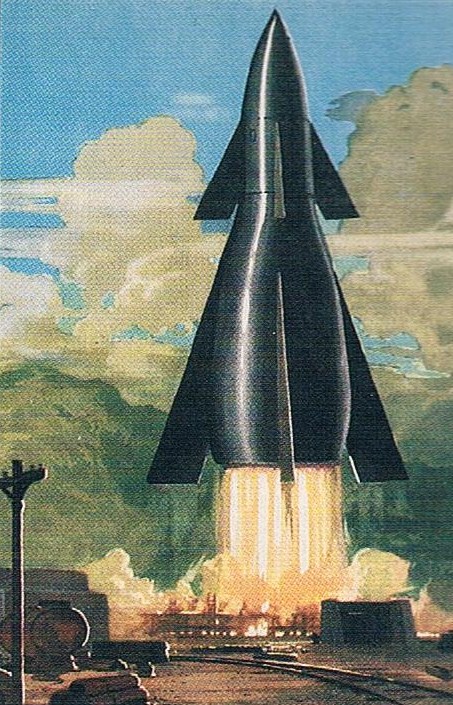 Stid:  Hardly surprising, since the cost of picking up a pen and writing a story is somewhat less than the cost of building a rocket.

Zendexor:  Though to be fair, some of the fictional Space Programs are costed - at any rate the reader is made aware that the undertaking does have a financial side.  What's really interesting is to explore the detail in those tales...

I'm referring, now, to proper Space Programs in fiction.  Big national or international projects, with realistic rockets.  Not lone back-yard antigravity jobs like Mr Cavor's in The First Men in the Moon. 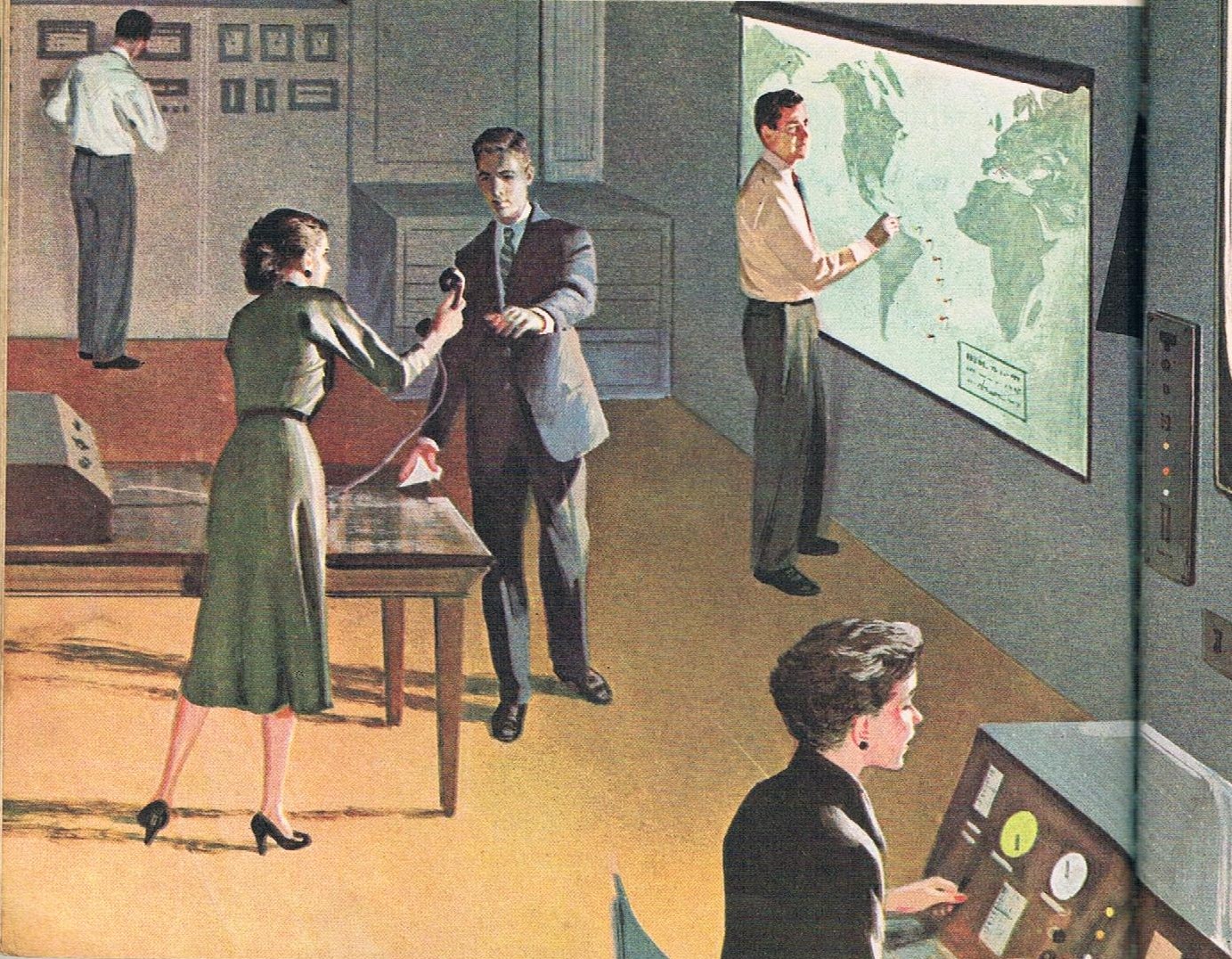 Stid:  And before you get carried away don't forget that in this part of your website you're supposed to be discussing Earth. 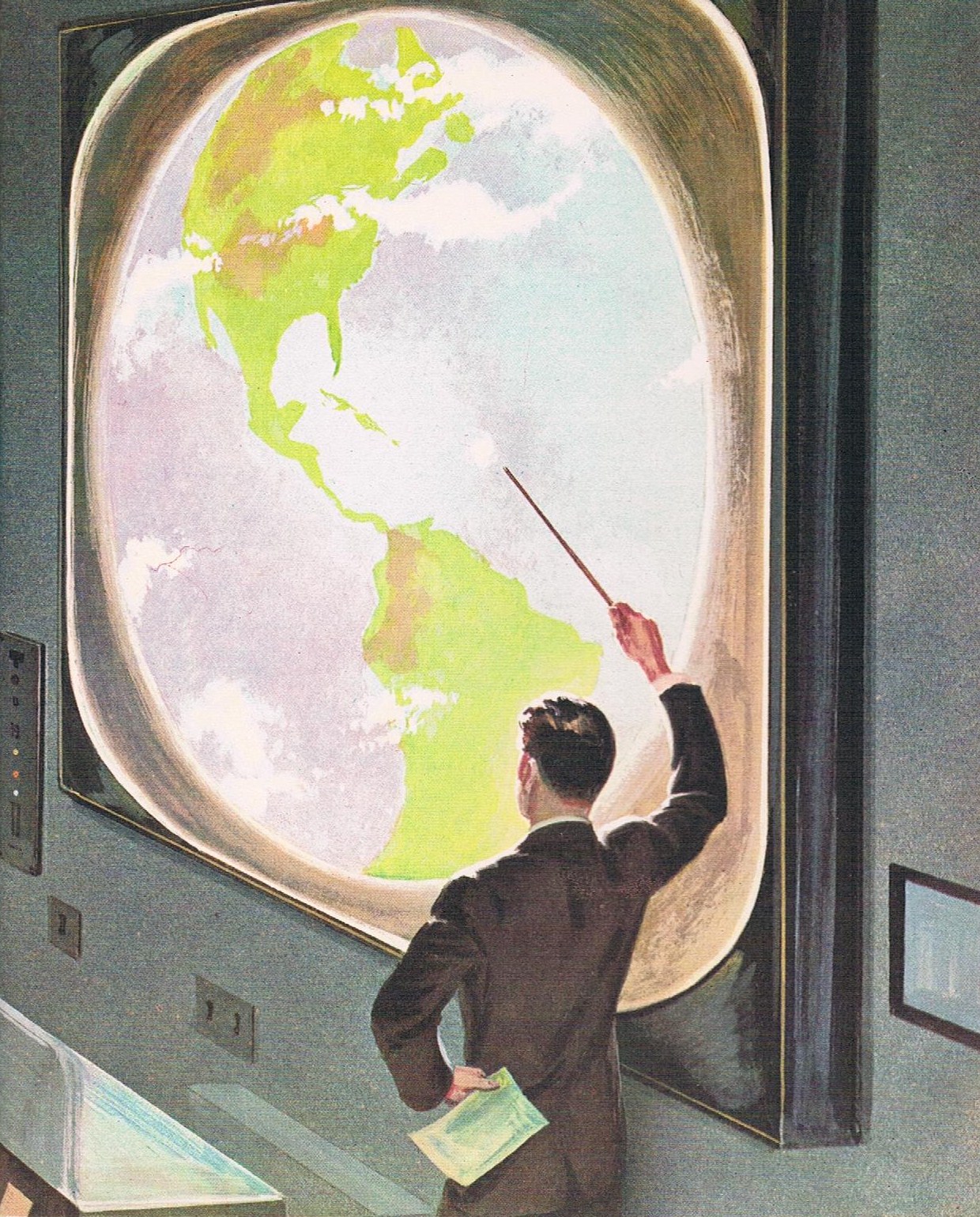 Zendexor:  Quite.  So here I look at the Old Space Program from the Earth viewpoint.  That is, from the ground: how a space project grew, how it took shape.

The might-have-been arrival of the Space Age.

This is a book for younger readers.  It was published in 1957, when the whiff of imminent manned spaceflight was in all our nostrils...  all right, I'm speaking for those of us of a certain age...

Quite remarkably, the novel is about the build-up and the outcome of a 12-minute sub-orbital flight, maximum altitude 158 miles.

I say "remarkably" because, although the point didn't occur to me in my early teens when I first read the book, more recently when I re-read it (at age 61) I suddenly realized: hey, this author deserves a lot of credit for the way he can construct a story focused on such a brief flight, and build up the interest and suspense with such realism.

Likewise realistic is the motivation for the space program: the familiar mixture of science and power-politics...

Harlei:  But that's only the long-range general motivation.  In Blast Off At Woomera there's a more immediate worry. 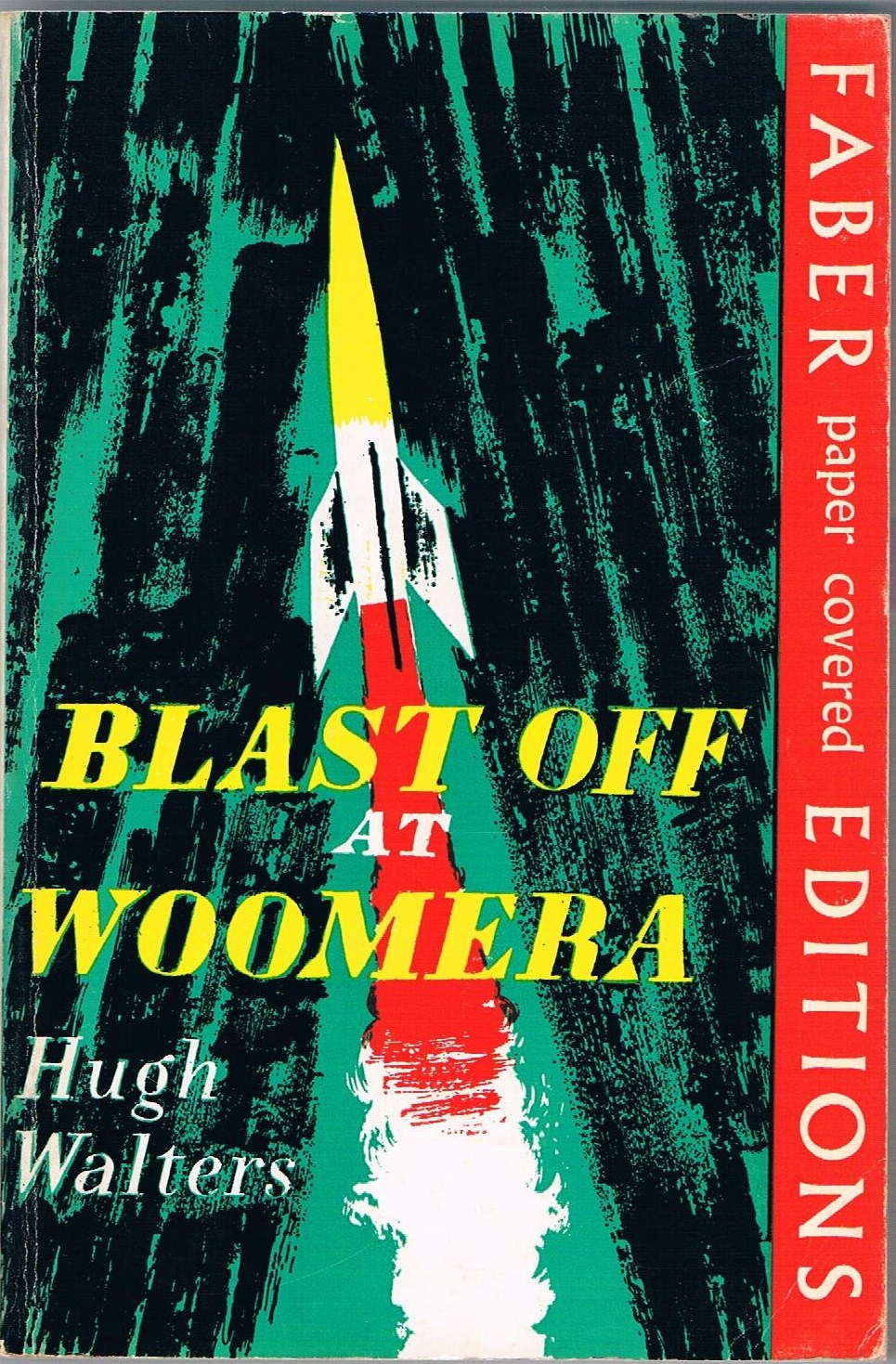 Zendexor:  True; I was about to say, that what hurries the authorities up is the sudden urgent need to take sharp pictures of an area on the Moon where mysterious alien domes have appeared...

Stid:  That's something NASA could do with now, to extract more dollars from Congress.

Zendexor:  Yes, but it's evident that the flight was going to happen anyway, it's just that without the alien business it would not have happened so soon.

And because it had to be so soon, there wasn't time to build a bigger rocket than the ones available - so a very small astronaut had to be found, which is why the seventeen-year-old four-foot-ten Chris Godfrey was asked to go up.

You can just about imagine this happening.  It's a reasonable excuse for a plot in which the first man in space is a boy.

Stid:  That's the ticket.  An excuse is what's needed, in children's science fiction books, to make it all happen to a child.

Harlei:  Like in the Alex Rider books, there's a good excuse given, for employing a fourteen-year-old as a spy.

Zendexor:  Makes me relive my own childhood... and you'll understand another reason for nostalgia when I say that the program was led by Sir George Benson, Director of the Rocket Research Establishment at Woomera, Australia: yes, those were the days when the Old Space Program (OSP) could have a British (or British Commonwealth) flavour -

Stid:  Though to be accurate the later flights, in sequels to the book, are made under the control of the United Nations. 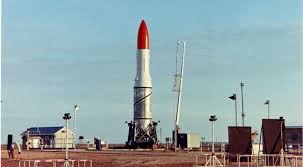 Zendexor:  Ah but the British cultural flavour remains tastable.  By the way, another British space program centred on Woomera - much more secret and "on a shoestring" - is enthrallingly described in the first few chapters of No Man Friday (US title First on Mars).

Blast Off At Woomera is not in the same class as No Man Friday but I must say I enjoyed re-reading it - in both books I love to be able to return, socially, to the real present (that's to say the 1950's or early 60's) from this weird far future in which we are living now...

Zendexor:  Sorry, you're right.  Mustn't be naughty.  Time now to jump to the next title on my OSP list, which is -

Something written even earlier!  Prelude to Space was penned in 1947, though published some years later, in 1953.

It has some interesting points in common with the other book.  Again we can enjoy reading about a world populated by human beings - 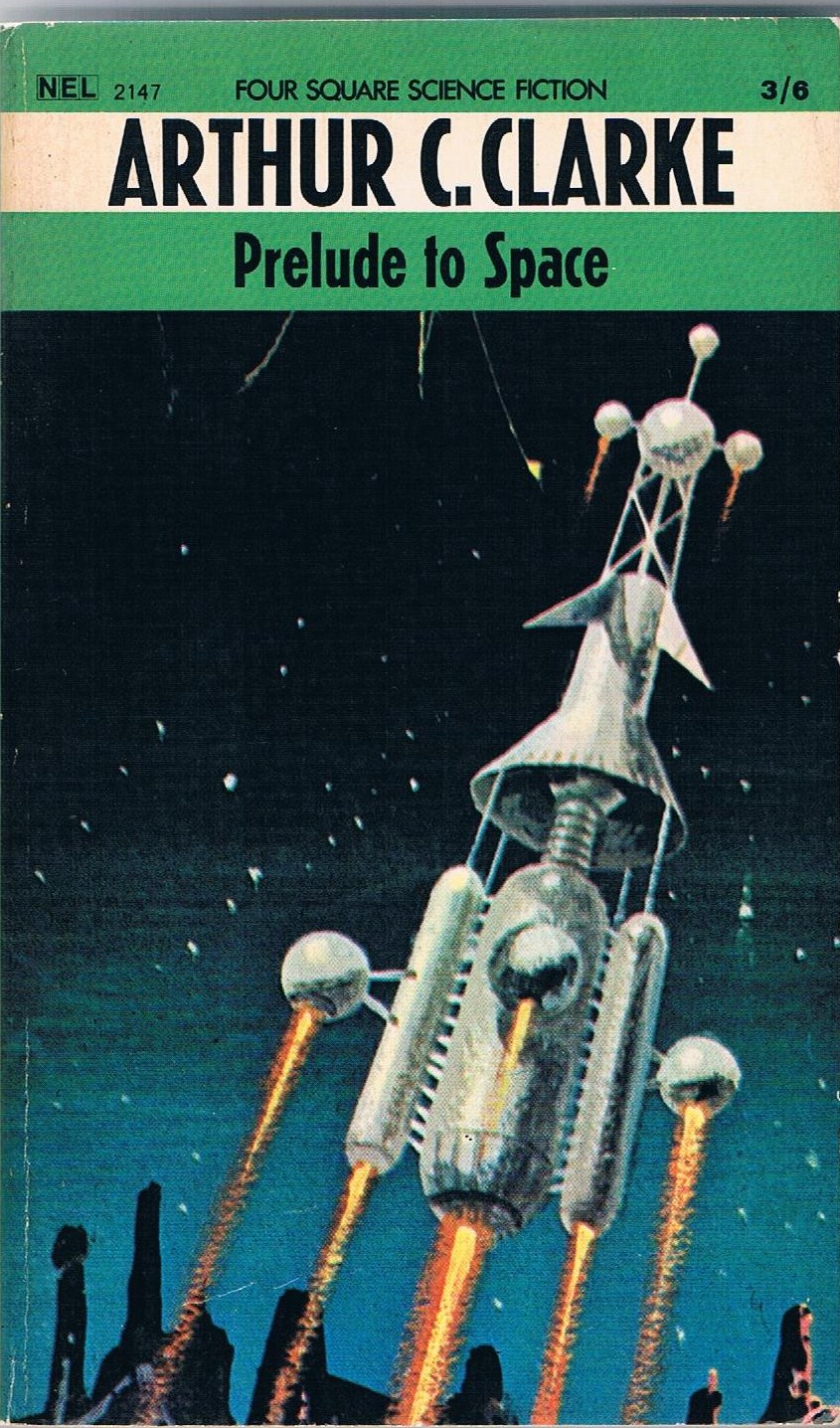 Zendexor:  Sorry, sorry.  Must stop this naughtiness.  Where was I?  Points in common.  Prelude to Space like Blast Off At Woomera has a British feel to it.  In Prelude the key organization, 'Interplanetary', is international ("about a fifth of the staff" being American), but the weighting is considerably British.

The headquarters is in London, the launch site is in Australia and the three-man crew of the moonship are all from the Commonwealth, if I remember correctly.

Now for the differences.

In Blast Off a foreign agent almost scuppers the mission in a dramatic and murderous scene in the control room.  In Prelude the only hostile intervention comes from a religious nut who does no damage except to himself.

On the other hand, I can think of two areas of excitement in which Prelude is bound to trump the other book.

First, the mission objective is more ambitious - the first Moon trip, rather than a mere suborbital flight.  So we can compare it with the reality, as follows: 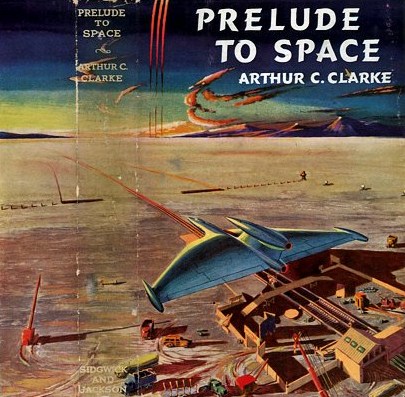 Three-man crew - like Apollo 11, though all three of them land on the moon in Prelude.

Atomic powered spaceship - as opposed to chemical fuel for Apollo.

Landing in the Mare Imbrium - compare the Mare Tranquilitatis for Apollo-11.

Interesting for the historian, these comparisons add immediacy to both the reality and the fiction.  But all this is rather straying from my focus on Earth, so let me hurry to my next point:

Prelude to Space was written in 1947 but is set in the year 1978, whereas Blast Off At Woomera is obviously set in a period only a few years after its publication date in 1957.  Therefore - 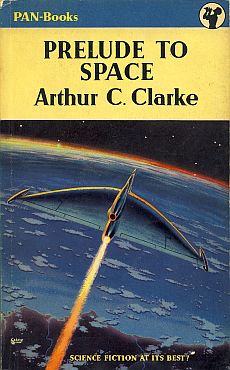 Harlei:  I know - I can guess what you're driving at - you can watch the divergence!  Across a thirty-year gap you can examine how wide of the mark the guesses become.

Zendexor:  Yes, it is both fun and thought-provoking, to get glimpses of what might have seemed reasonable in 1947 concerning 1978.

For some time they discussed American affairs and speculated on the Democrats' chances of returning to power.  Dirk contended that the Liberals would once again hold the balance, and made some brilliant comments on the advantages and disadvantages of the three-party system...

Stid:  So how much did you enjoy reading Prelude to Space?  Would you recommend it to me?

Zendexor:  I'd hesitate before recommending anything to you, but yes, I enjoyed it.  Actually, this was my third read of the book.  I enjoyed it the first read, was rather bored during the second many years later, and then recently when coming to it for the third time I went back to enjoying and appreciating it.  Make of that what you will. 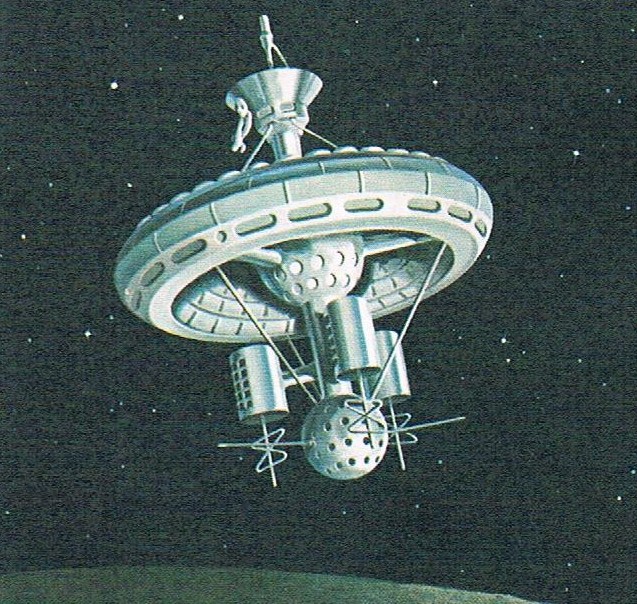 how the space station was supposed to look

Harlei:  It's whatever you expect from a book, which determines whether or not you enjoy it.  If you're in the mood for contemplating historical resonances, Prelude to Space sounds like a good read.

For Mercury, the Moon and the old space program, see the OSS Diary for 17th September 2016.

See the OSS Diary, 24th October 2016, for preferring to "do things in the right order", that is, concentrate on the Moon before aiming for Mars.  I return to this theme in Musk Aiming for the Wrong Target.

For thoughts on paranoid plots regarding the demise of the Old Space Program, see the OSS Diary for 2nd November 2016.  See also Secretive O.S.P.

For the one-man mooncraft of Operation Columbus by Hugh Walters, see the OSS Diary for 4th November 2016.  See also Hugh Walters and the Moon.

See the Diary for 2nd December 2016 for an illustration of an old-style space-suit looking like a suit of armour, from High Road to the Moon.

For the OSS/NSS boundary tale The Pro, by Edmond Hamilton, where the Old Space Program meets the new, see the OSS Diary for 8th January 2017.

For speculation in the year of Apollo 11 on likely lunar colonies within a decade, see
What Might Very Well Have Been.

For You Will Go To The Moon by Mae and Ira Freeman, see A Book with the Right Idea.

See the Diary entry, Shades of the H-R Diagram, for ideas that might be used in researching the history of what was thought reasonable in astronautical fiction.

For the USAF's Project Horizon see A Flash of Ambitious Hope in 1959.