Whereas the Interplanetary Knock-Out is by and large mere fun, this hits-parade ought to yield more serious information about the relative spheres of interest in the Old Solar System.  It should give us a clue as to where that interest is most concentrated.  Thus it should help answer the question: what are the most powerfully attractive zones in the OSS? 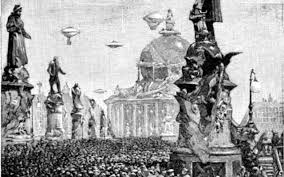 the fans arrive for the opening ceremony

It won't be a perfect guide to the popularity stakes, for it must depend upon which pages happen to have been created, by a fallible person known as Zendexor.

But the decision to create those pages before others wasn't arbitrary.  Choice of page is influenced by both supply and demand: what has been written and what readers want, judging by what they say and where they click.  Also, of course, what has been written is to some extent influenced by publishers' decisions based, in turn, upon sales.  The various influences percolate... to here.

The results shown on this page will thus be the closest we'll get to an opinion poll about the favourite OSS zones.

Not every page can be counted here; only those which can be related entirely to one zone.  That excludes most author pages (an exception is Rex Gordon, who's in it because his page is overwhelmingly Mars-oriented); most general theme-pages likewise, naturally, have to be excluded.