Consider the scope for adventure on old-style Uranus, a giant world over thirty thousand miles in diameter, with its retinue of five classically known moons Ariel, Umbriel, Titania, Oberon and Miranda... yet literature hasn't exactly been over-obsessed with the seventh planet.  For decades, Uranus has been mostly neglected - though the good news is, better times are now at hand. 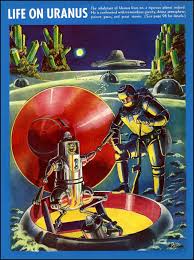 I reckon that, for a long time, your best bet, if you wanted your imagination to rove in Planet Seven, was to look at pictures - especially Frank R Paul's "Life on Uranus" and "A City on Uranus".

Stid:  So - the great Old Solar System tradition let you down, did it?  Well, I know this is supposed to be an "OSS-only" website, but will you let me mention one NSS - New Solar System - visit?  I mean the highly interesting modern-realistic-style visit to the Uranian system of moons narrated by Kim Stanley Robinson?  It's in his Mars trilogy, which covers a lot more than just Mars.

Zendexor:  Sure, you can mention it.  It's a fascinating read, though not our business here.  Back to the OSS - no need to give up on it -

Stid:  You're hinting things have improved.  Get to the point then!  What's the good news?

Zendexor:  I insist on stating the case in five stages...  I shall call them: 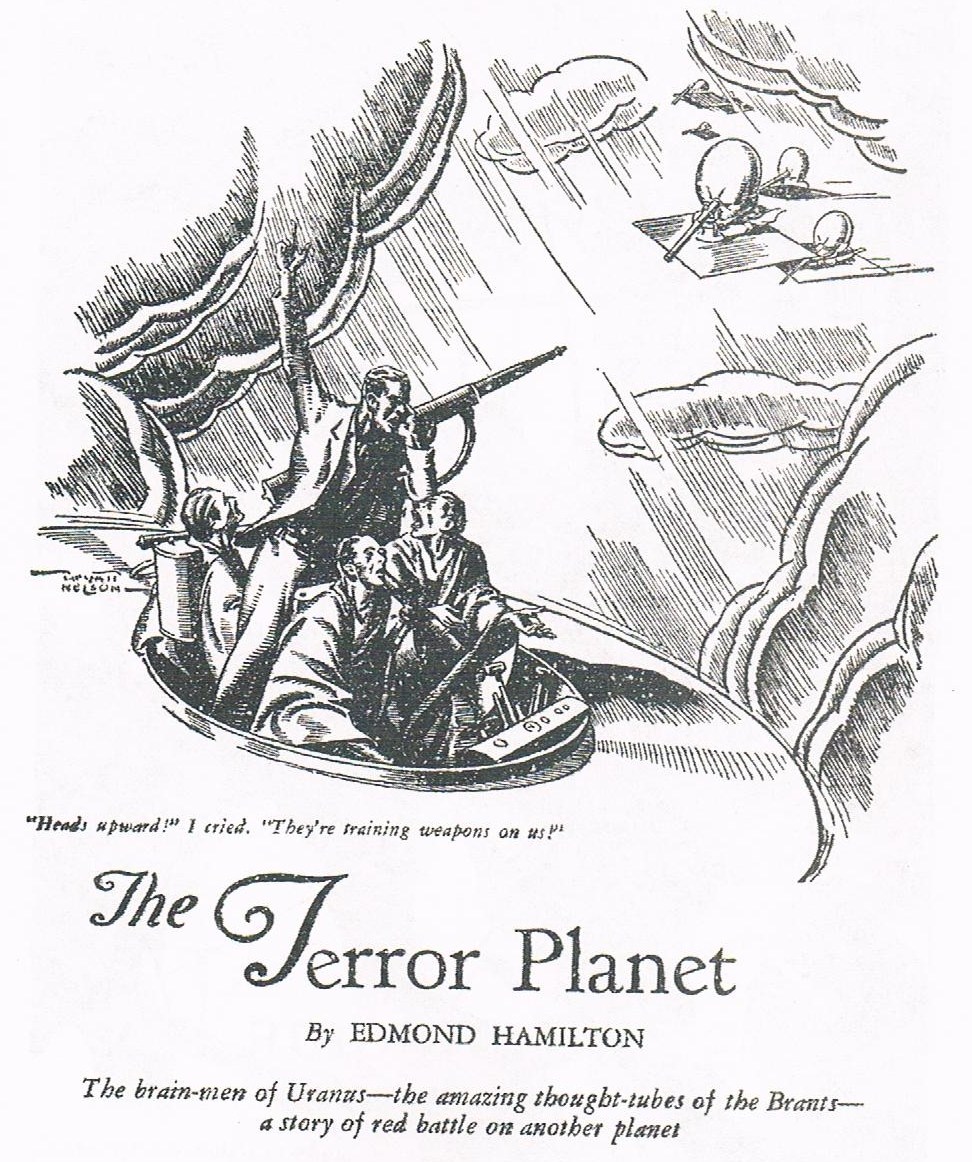 Until very recently, the only OSS stuff we had about Uranus was a few scraps, plus a couple of pieces which were somewhat more than scraps.

The first proper Uranus story I know of is The Terror Planet (1932).  Approximately thirty pages of old-style OSS thrills, it is discussed on our Edmond Hamilton page.  It zestfully gives us a Uranus thick with forests, beast-men, and contrasting civilizations.

Below us the forest stretched from horizon to horizon, an ocean of dark-green vegetation that lapped over low hills and shallow valleys.  The only breaks in its dense mass were occasional clearings where outcrops of dark or gray metals glinted.  The strange scene was it by the rays of the descending sun, a miniature sun whose smallness and whose thin light more than anything else assured us that we were indeed on Uranus.

Next, let's consider another tale that is likewise about thirty pages long.

While it may lack some of the exuberant, naive freshness of The Terror Planet, our next focus, The Planet of Doubt, is on a higher level of invention, originality and mystery.

In this tale, the dim, eerie, misty environment of Uranus has evolved creatures that are blind, and are adapted to their blind nature in a surprising but logical way.

"Chain-creatures", like giant caterpillars, follow one another, while translucent gargoyles hover around them, and both forms are linked in a way which the heroine - who gets lost among them - begins to understand.

Harlei:  Nice tale, but - it doesn't increase our portion of Uranian civilization. 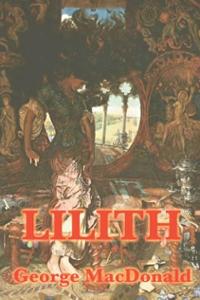 Here we have a tiny, wonderful, astonishing glimpse of Victorian Uranus!  Lilith is a dreamlike fantasy which begins in a grand old house, somewhere in Britain.  Its library haunted by a shape-changing Mr Raven - sometimes a blac-clad old man, sometimes an actual bird.  Quite out of the blue, on a rainy morning, Mr Vane, the cataloguer of the library, hears from the Raven concerning the planet Uranus.

"Yes," he answered in the rather croaky voice I had learned to know, "the ground will be nice for them to get out and in -  It must be a grand time on the steppes of Uranus!" he added, with a glance upward; "I believe it is raining there too; it was, all the last week."

"Why should that make it a grand time?" I asked.

"Because the animals there are all burrowers," he answered, " - like the field-mice and the moles here. - They will be, for ages to come."

"As any one would who had been there to see," he replied.  "It is a great sight, until you get used to it, when the earth gives a heave, and out comes a beast.  You might think it a hairy elephant or a deinotherium - but none of the animals are the same as we have ever had here.  I was almost frightened myself the first time I saw the dry-bog serpent come wallowing out - such a head and mane! and such eyes! - But the shower is nearly over.  It will stop directly after the next thunderclap.  There it is."﻿

Inconsequential - hallucinatory - but for me the two phrases which anchor it are, "They will be, for ages to come" and "such a head and mane!"  Uranus is never mentioned again in the book, yet it retains the sense of age-long future development, and things coming out of the ground.

Stid:  And apart from this little Victorian gem, what else?  Are you going to see to Harlei's request for more civilization?

the mountains - and other glimpses 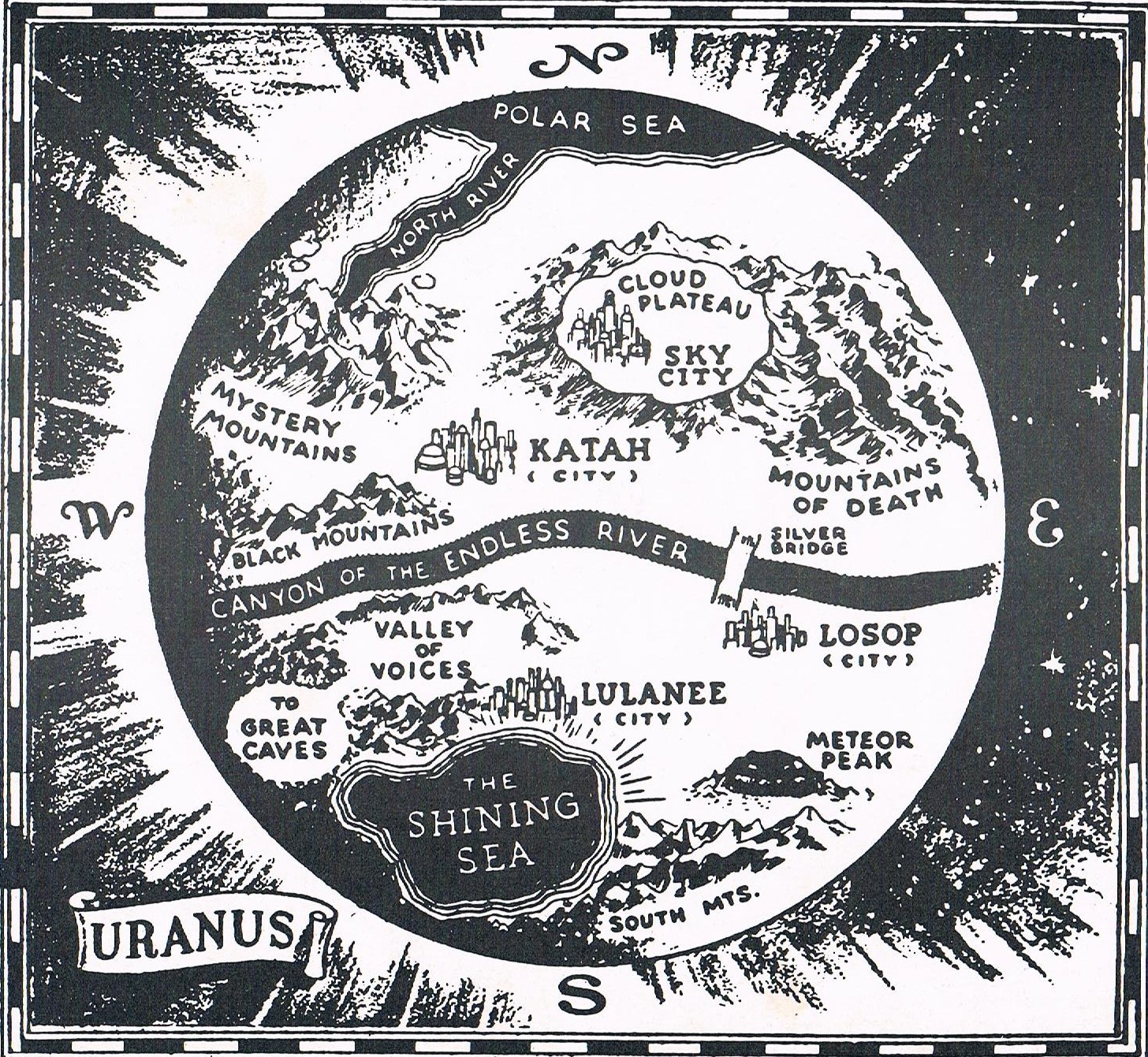 Zendexor:  Well, there are the sketchy scenes in Captain Future, for instance - tantalisingly skimpy, though the map has potential.

Harlei:  I rather liked the bit in the Valley of Voices, when Captain Future pursues The Magician of Mars to Uranus:

They flew on above the unending peaks and ridges until Curt descried a moonlit gorge far ahead.  It was of great depth, a sheer-walled valley between two towering ranges that ran roughly from east to west.

It was the famous Valley of Voices...

They looked along the great gorge at whose bottom they stood.  It was deep shadow down here at the floor of the valley.  They could only dimly see the grassy fields and shrubs around them, and the "floating flowers", the unique flora of Uranus.  Those large white blossoms drifted in the air like fairy blooms, drenching the soft night with fragrance.

The moons gleamed off the upper walls of the valley.  Those sheer cliffs were mantled with thin, glittering sheets of talc that had exuded from the rock.

"I thought there were some wonderful echoes in this place," Grag commented disappointedly.  "I can't hear anything."

"It's only when the wind blows and strikes those hanging sheets of talc that you hear anything," Curt told him.  "Listen now!"

Zendexor:  And then, yes, I remember, they do begin to hear - every sound that had been made in the valley for ages past.  It's an effective scene in its limited way, like many in the Captain Future books.  The action is too hurried to create much depth, but I'm not knocking these yarns at all - they are fun - they appeal to my inner child.  Which I hope I shall never lose.

Still, the fact is, for a seeker of Uranian character, the Valley of Voices passage, though promising, is a scrap, hardly more.

Similar in its limited range to the scraps in The Free-Lance of Space, for instance: 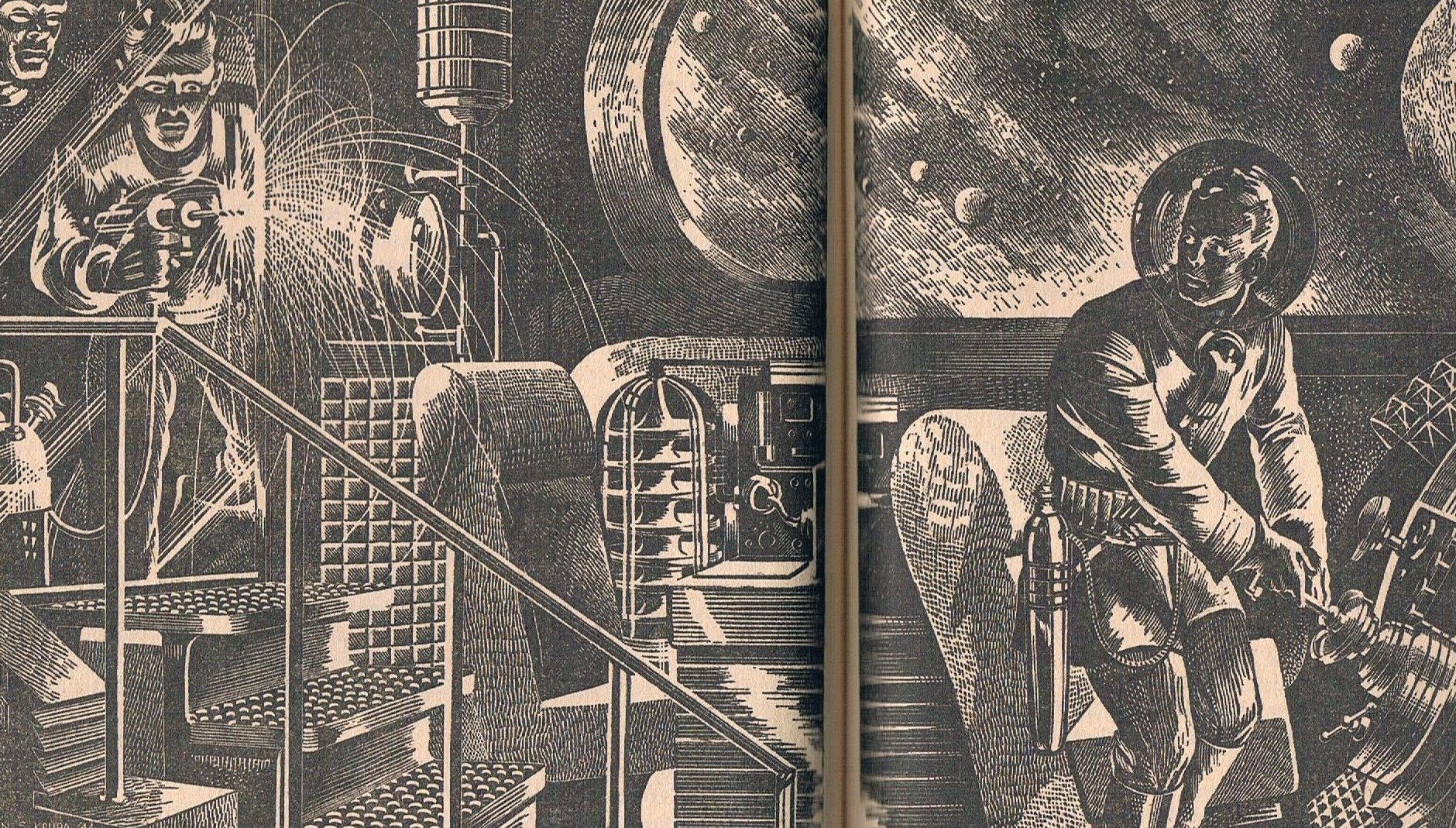 Under two bright moons, the dark towers of Uranopolis stretched north and west.  Only a mile away blazed the blue-white lights of the great space-port, on whose outskirts sprawled this slum of metal shacks whose dingy resorts were popular with interplanetary sailors.

Rake Allan hastened through the dark, alley-like streets with long, swift strides.  He reached the wretched tenement that had been his hiding-place for two weeks...

Stid:  It is rather perfunctory.  "Uranopolis", indeed!

Zendexor:  Again I must stress that I'm not trying to knock an enjoyable tale - I could spend happy hours reading this sort of stuff.  But - "perfunctory" is indeed the word.

In fact I've been reduced to picking out what clues I could from single sentences, such as this one from Treasure on Thunder Moon:

"...They use anti-heat equipment a lot for prospecting in the southern volcanic region of Uranus..."

So there we are - there is, apparently, a southern volcanic region of Uranus.  An intriguing sentence, which unfortunately does not go far towards deepening one's Uranian studies.

Nor does the three-page Uranian Justice, which describes the planet as "a world on which nothing organic could survive" and a "bleak planet of eternal winter"... 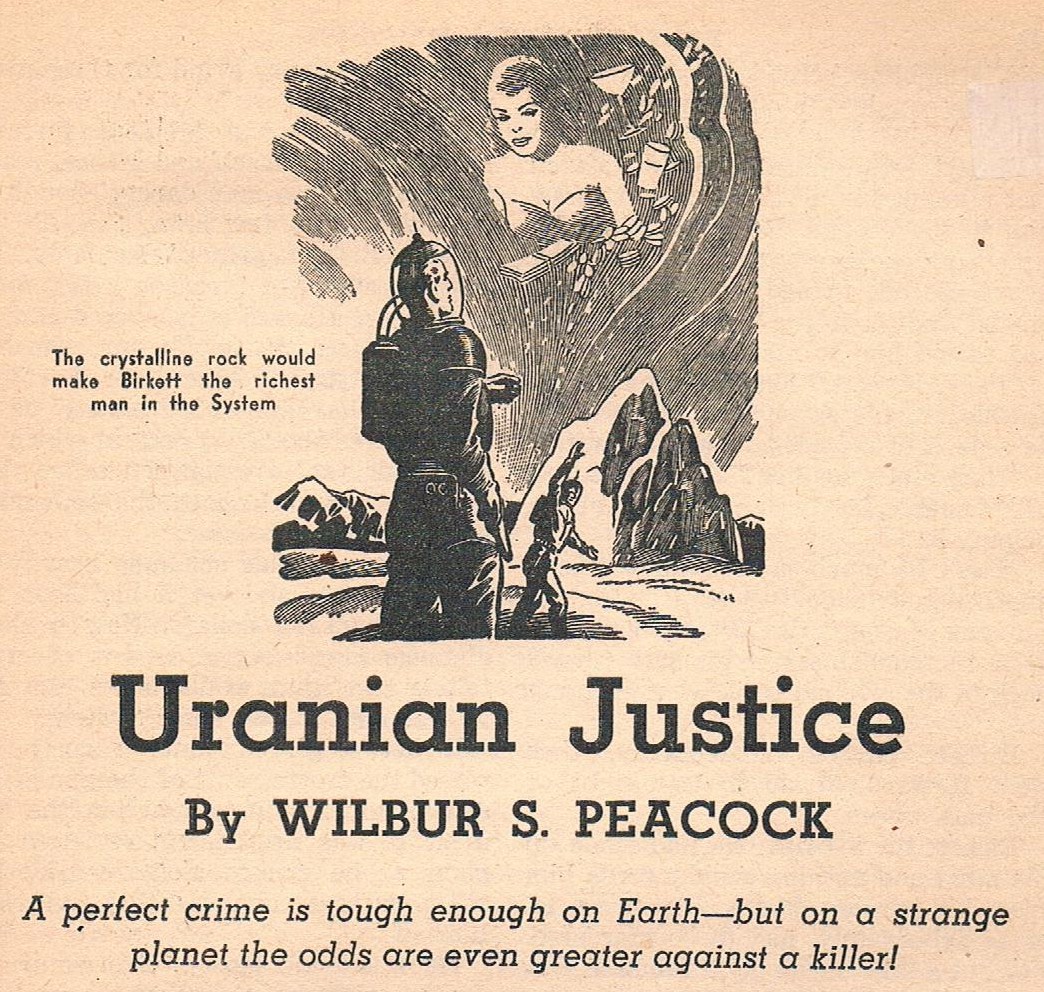 The sky was a dirty gray, its dimness brightened but little by the tiny orb that was the setting Sun.  The minor moon, Ariel, moved across the horizon in a retrograde motion a scant few minutes ahead of its companion satellite, Titania.

Kurt Birkett scowled, scuffing his feet soundlessly over the frozen terrain.  So this was Uranus!  Well, he hated the place, although he had been on its surface less than twenty-four hours.  He hated this world's frozen surface, its dirty sky, its blinding storms that descended with monotonous regularly [sic] in battering waves of force.

Stid:  So - this is how bad things were.  And now they're better.  That's what you're leading up to, isn't it?

Zendexor:  For this whole page I have indeed been leading up to the sort of announcement that interests me -

What I want, you see, is to explore a real Uranian civilization which has as much atmosphere, global personality and invention as (for instance) Barsoom or Malacandra.  Not that I insist it be like those in any particular detail.  But it's vital that there be detail.  I want the seventh planet to be brought to OSS life in a big way.  And now I have found what I want -

Only the slight brush of a cool breeze disturbed the lake.  Sparse leaves rustled on the scrubby plain beyond, while the waves sloshed gently against the shoreline, as they waited for History.

The scene was deserted by all heavy creatures.  Nothing came to drink the oddly muttering waters; the ice-chocked landscape remained un-crunched by any footprint so far.

The waters on that morning did more than mutter.  They started to seethe; and the beginning began.

That book will keep me happy for a while, but having covered the planet Uranus itself, let's round off the page by asking, what about the five moons?

See the pages for Ariel, Umbriel, Titania and Oberon.

Harlei:  That's four out of the five OSS Uranian moons.  What have you got on Miranda?

Zendexor:  Nothing so far, but let's keep looking, and sending out waves of encouragement to retro OSS authors...

For a light-hearted tavern scene on Uranus in a Captain Future tale, see the OSS Diary for 5th April 2017.

For Uranian diamonds, see Relations with the Real.

For a poetic hint about life on Uranus see the Diary for 5th November 2018.