Stid:  Hot or cold, I'm surprised it's catered for at all.  Such an obscure satellite to have a whole page on the website to itself!

Zendexor:  Yet - here we are.  Thanks to Edmond Hamilton.

Harlei:  Yippee!  Hamilton for ever!  When I learned about Treasure on Thunder Moon, I felt like... 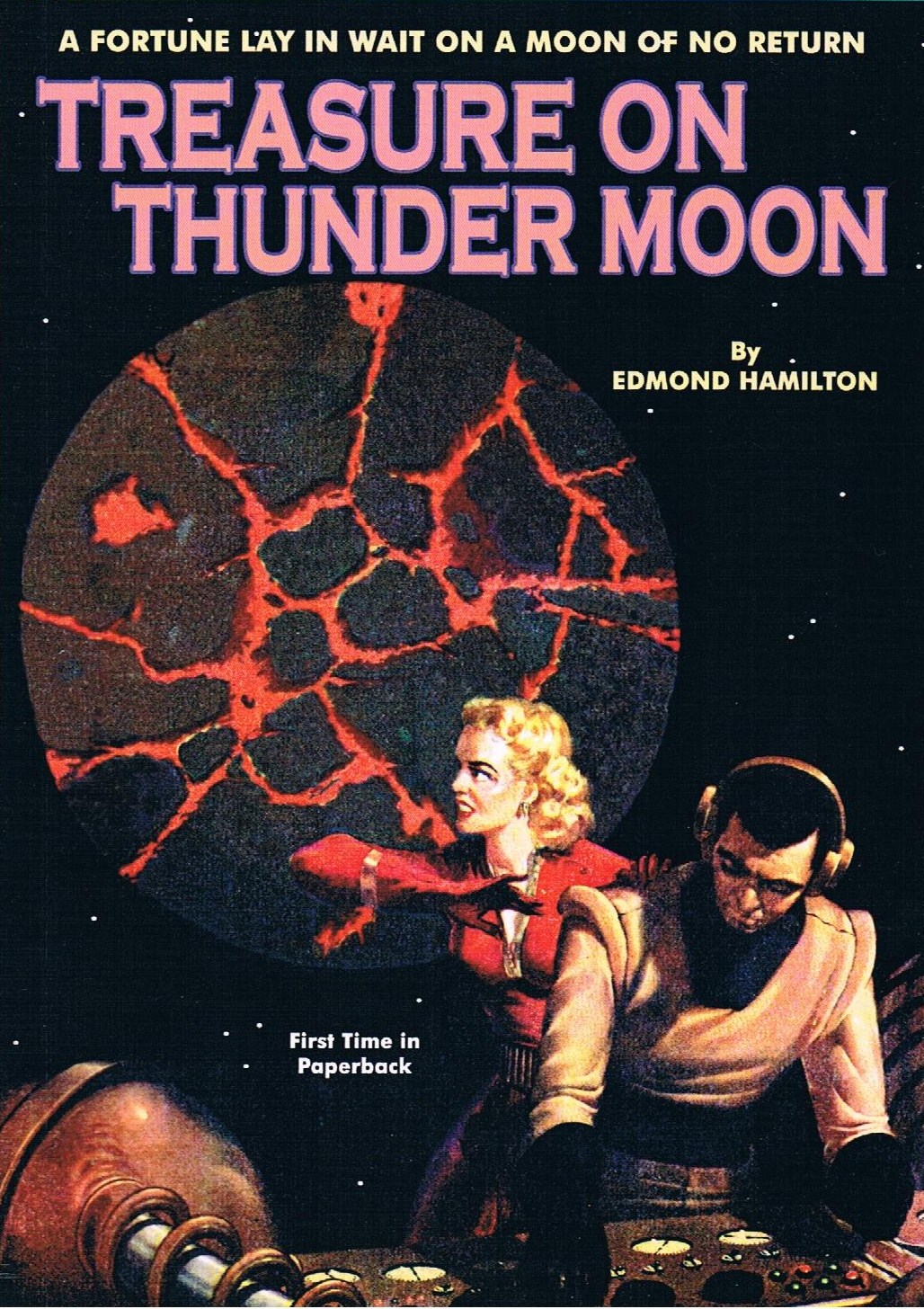 Stid:  Like an art critic who's just heard of a cache of hitherto-unknown Leonardos or Rembrandts.

Harlei:  At least.  If not more so.  You see, I thought I knew all the book-length Hamilton tales - knew of them, anyway.  And then I hear of this one.  Makes me wonder what else I'm missing...

Stid:  So your pulse starts to race.  But now that you've added Treasure on Thunder Moon to your collection, would you really call it a masterpiece?  The plot is very basic.  Down-at-heel spacemen club together to look for treasure...

Zendexor:  Let me take over.  Harlei would indeed call it a masterpiece, and actually, it's arguable that it is - albeit a slender, minor masterpiece, like a lyric poem which expresses conventional thoughts but expresses them so perfectly that in its own terms it can't be improved.

Stid:  I've known you make extravagant claims for Hamilton before...

Stid:  Any writer could opt for that excuse just by employing more clichés than anyone else...

Zendexor:  Ah, but you must admit that Hamilton's stuff can't be as easy to write as he makes it look - else why aren't there any successful imitators?

Stid:  And are you sure there aren't? 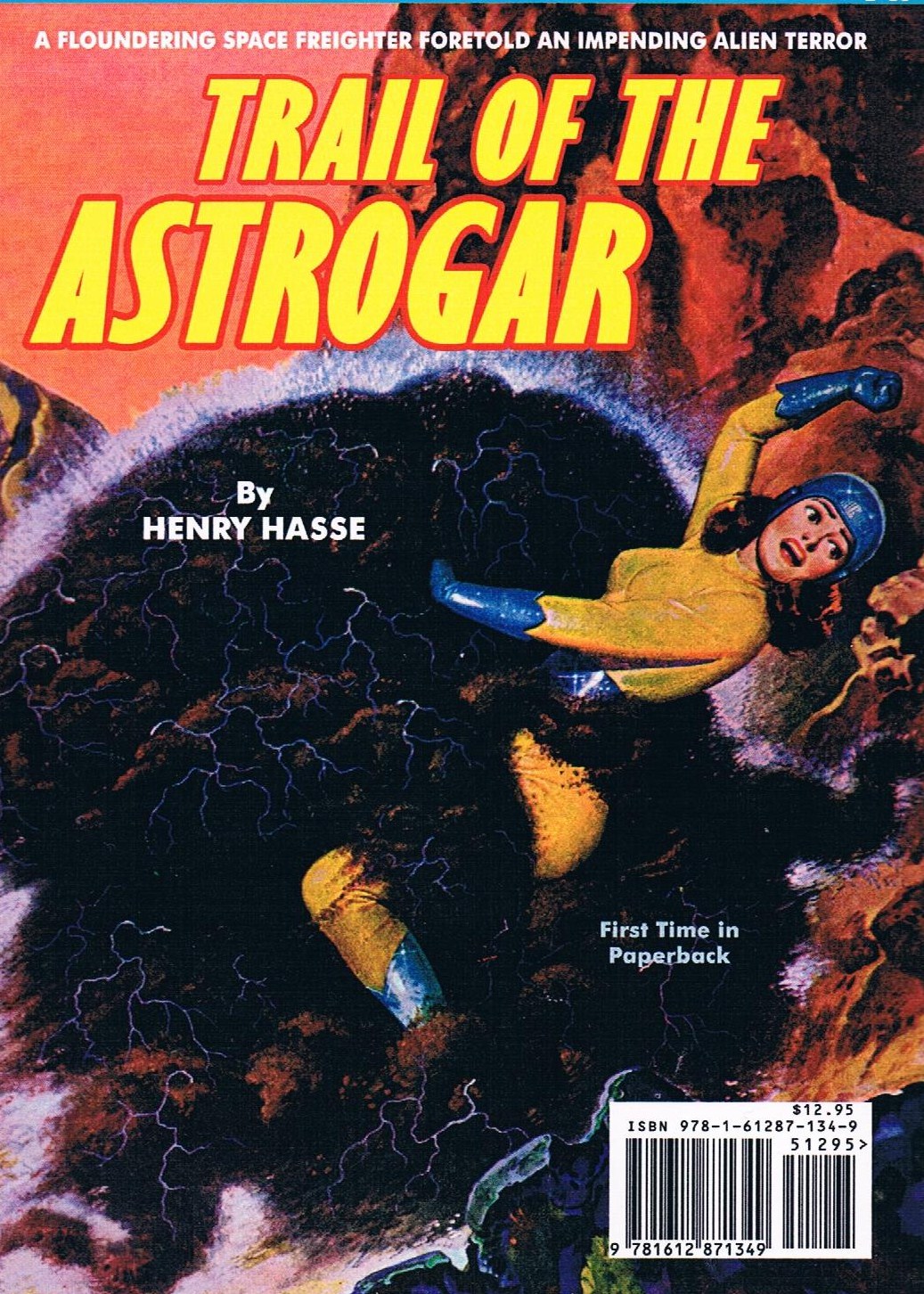 Zendexor:  See for yourself at the back of the recent edition of Treasure on Thunder Moon.  Quite handily, the publishers who have reissued the book have also included another tale - one by a different author who is aiming at the same sort of market.  You'll see it fails to match the first story.  It lacks the pure Hamilton touch.  And the contrast between the two efforts makes my point neatly.  You'll have to agree: just read them both, one straight after the other.  One succeeds; the other does not.

Harlei:  Actually, Zendexor, I thought the second tale did come alive when we meet the asteroidal beings... and I thought the Jovian, Kraaz, was quite an interesting character.

Zendexor:  I stand by my statement: read both tales together, and you'll see what I mean.

Stid:  I have become familiar with the way your mind works, Zendexor, sufficiently so to be able to tell where your argument is headed.  You're next going to make the point that there must be some precise naiveté-to-realism ratio, the secret of which Hamilton instinctively possessed, which allowed him to achieve the exact degree of focus to bring into vivid life the standard-model Old Solar System scenario...

Zendexor:  I have trained you well, Stid.  Well spoken, so far.  But there's more I want to say at this point regarding naiveté - more specifically about the Uranian moon Oberon.

Hamilton had written about it in a previous tale, published just two years before Treasure on Thunder Moon.  We thus have a rare opportunity to compare like with like, isolating just one altered variable - the increased age/skill of the writer.  Let's look at the earlier effort first.

In Captain Future's Challenge, the intrepid planeteer, on the trail of the wreckers who are targeting the System's gravium mines, heads for what in that book, too, is dubbed Thunder Moon:

"Head around to the night side of Oberon, Grag," he directed.  "According to my maps, the gravium mine is there."

Grag, who held the controls, obeyed.  The ship's comet-camouflage now cut off, he shot the craft around to the dark side of Oberon, also known as the Thunder Moon because of its many active volcanoes.

Thunder Moon!  One of the most awesome and dangerous of all the worlds in the System.  Curt Newton had good reason to remember it, for on this hazardous sphere had been staged one of the most dramatic episodes of his great struggle with the villainous Lords of Power.

Thunder Moon - a rugged wilderness of mountains, valleys and gorges, illuminated now by the ghostly green radiance of the huge planet that hung in the heavens overhead, and also by the ominous red flare of countless volcano craters that seethed and smoked at innumerable places.

Wild and forbidding indeed was this unearthly moon, whose core was a mass of molten lava that was forever bursting up through the craters in violent eruption.

All this is good enough for a Captain Future book.  Vivid, sketchily colourful, with a degree of stylistic naiveté which you'd expect in that context.  Now let's compare that version of Oberon which Hamilton penned in 1940 with that same Thunder Moon evoked two years later: 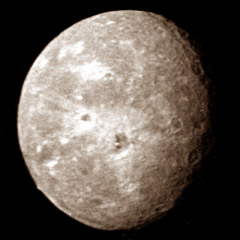 the real Oberon - paint it red in your mind

The fourth satellite of Uranus was coming out from behind the bulk of the planet.  Aline cried out at sight of it.

The moon was a terrifying sight.  It was a sullen crimson sphere, wrapped in a shallow atmosphere heavily laden with dark smoke.  Through rifts in that gloomy, smoky haze could be glimpsed flaming volcanic continents - lands of fire upon whose burning coasts surged the evil crimson tide of a great ocean of molten lava.

Thunder Moon, lurid hell-world of the System, a playground of unchained volcanic forces that made it resemble some inferno of ancient superstition.  Its red rays struck through the window of the flying ship, mingling with the softer planet-light to paint the tense faces of the staring group.           [Treasure on Thunder Moon, p.46]

Apart from one slip - the word "sight" in the second line unfortunately repeated in the third - I'd say the passage marks a clear advance upon the earlier one.

Elsewhere in the book there are just a few lapses into Captain-Future-ese - if you want to call them lapses rather than endearing stylistic idiosyncrasies.  I refer to a couple of peculiar adverbs:

(Fortunately, nowhere do we find the more ridiculous "panically", "awedly" and "appalledly" which have been known to occur in Captain Future stories.)

As for the plot, that indeed is extremely simple.  And none the worse for that.  The book, you see, is a celebration of the basics.  It gives us the standard-model Hamiltonian Old Solar System, a gloriously ramshackle frontier society for Terrans who have recently achieved space travel and are spilling untidily across the varied inhabited worlds of the OSS.  (Even Oberon itself turns out to be inhabited - by fire-spitting beings evolved to match with their igneous environment.)

The particular theme of this story is that of distressed redundant spacemen, washed-up has-beens in their thirties or older, rejected by the companies who used to employ them, but making one last attempt at finding treasure to save themselves from destitution and to help their fellows in similar plight.

"Company rules don't change, it seems," North muttered.  "A man over twenty-five hasn't a chance to be signed on."

"Hell take the Company!" growled Whitey.  "As if you weren't a better spaceman than the half-baked kids they've got running their tubs."

North made no answer.  What was the use of going over all that again?  The others were blind to the changes that had taken place.  They still thought of themselves as the pioneering young spacemen who had sailed with Johnson and Carew and Wenzi and the other great first explorers who had opened up the spaceways in their epochal first voyages to other planets.

But all that had been a generation ago.  Everything had changed, since then.  Interplanetary navigation had mushroomed from that precarious beginning into a vast, profitable trade.  The rush of ambitious Earthmen to other worlds, the scramble for valuable metals and minerals on foreign planets, had caused space shipping to expand with incredible rapidity.

And in that explosive expansion the early space pioneers had been forgotten.  They had been famous for a short while - but fame was ephemeral in these swift-moving times.  And very many of them had died from the hardships of the early voyages in unsafe, ill-equipped, primitive ships.  The great Gorham Johnson, the first space voyager of all, had died in his third voyage off Jupiter.  Mark Carew, his famous successor, had gone two voyages later.  Wenzi hadn't long survived his pioneering trip to Pluto.  From ray-burns or internal injuries or weakened hearts, the space pioneers had dwindled away.

And those who survived were nearly all in straitened circumstances.  That had been more or less inevitable.  They had been spacemen, their only interest the pioneering of space travel.  They therefore reaped no riches from the worlds they opened up.  It had been the prospectors, and speculators and promoters who came after them, who eagerly staked claims to every valuable metal deposit on the planets, who reaped the reward...

Aging, poverty-stricken, deemed unfit now for the space sailing that was their only trade, this dwindling remnant of the space pioneers had clung together.  By pooling their scanty earnings at odd jobs, they had kept alive and hoped for a chance to get to space again.  But now the last hope of John North and his comrades seemed definitely ended...

Then, unexpectedly, comes a last chance...