The very word "Sun" scorches the imagination with its heat and brilliance.  But some writers dare to use it as a scene, or even to picture it as a world, bearing life. 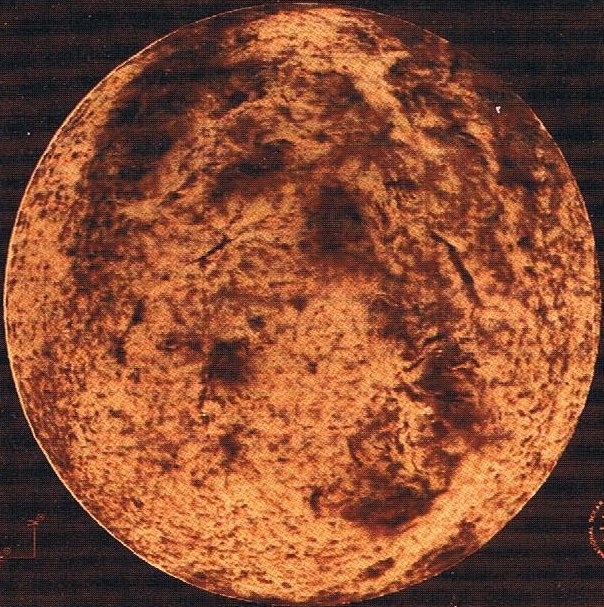 Stid:  I'm told that way back in 1795 Sir William Herschel speculated that the Sun might be inhabited.  You'd think that such a great scientist, the discoverer of Uranus and investigator of the galaxy, would have had the sense to realize that the Sun was rather too hot for folk to live on...

Harlei:  Watch it, you're going to get floored by Zendexor, who will point out that Herschel's idea may have been not so stupid after all, if we link it to modern science fictional notions such as neutronium beings or plasma-creatures or sentient energy-vortices...

Stid:  But Herschel wouldn't have known about all that stuff.  Not back in George the Third's reign!  No, I reckon Sir William simply didn't think of the surface of the Sun as all that hot.  I believe he thought the heat came from the Sun's atmosphere, but that lower down was a land which ordinary flesh and blood could inhabit.  Quaint - but let's not be childish.  Let's explore serious sf instead, shall we?

Zendexor:  I spot a recurring theme here - the start of a long circular journey, in three stages.

from first to second childhood 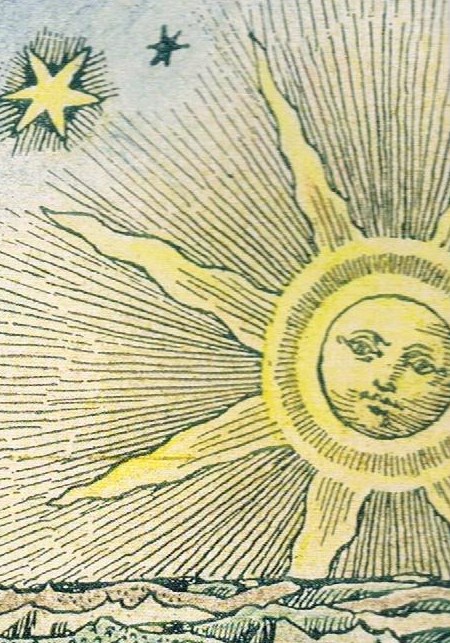 We start with a child's picture, such as a yellow blob for the Sun, with its spiky rays.  To a child, a star can easily be a world.  (Think of that old TV series the Clangers.  Was it the Pole Star, or the Dog Star, that had creatures living in craters?)  And, equivalent to this stage of art and imagination, we have the naive speculations of Herschel, or the satirical fantasy of Cyrano.  Or best of all, the marvellous Narnian Sun in The Voyage of the Dawn Treader, which looks bigger as you sail towards its home beyond the world's edge.  (We are told that "a fire-berry from the valleys in the Sun" is brought every day to rejuvenate the aged star, Ramandu.)

Let's call all this Stage One.

Then comes sophistication.  We grow up and enter Stage Two.

This is when we realize that the Sun is very far from being a yellow blob.  It's blinding white, six thousand degrees at its surface, millions of degrees at its centre.  Life as we know it is out of the question, and as for life-as-we-don't-know it, if it does exist, it must be so far beyond the range of our experience -

Aha, but here comes the final jump, from Stage Two to Stage Three.

Again and again it happens like this.  Not perhaps a circular journey, despite what I said before, but rather a spiral journey - you re-visit where you started, but at a higher level. 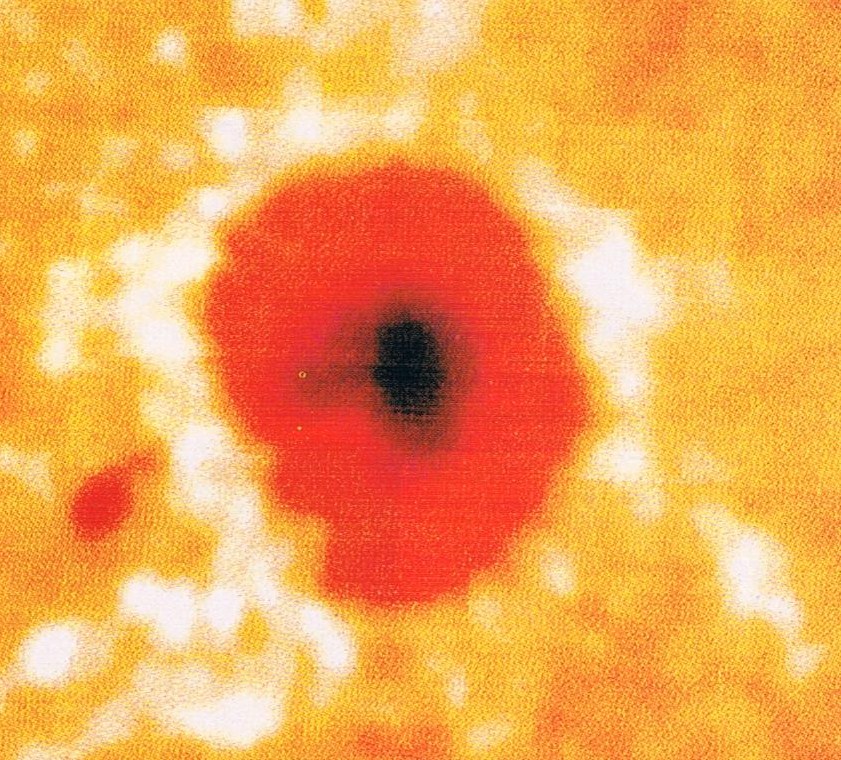 The child can be right - the Sun can be yellow, not blinding white - and furthermore the incandescent sunscape can be muted to landscape hues.  How?  As follows -

You just have to realize that necessary truth - that any nature is natural to itself!

And how does that translate into the thing's perceptions?  Well, we don't know.  But there's no reason to deny the possibility, that what we see as "yellow" might, to such a being, in its own situation, likewise denote some aspect of the scene.  This is what one might call the "transferred interpretation".

Who knows, the sun-beings may stroll in golden countryside. Or it may even look green to them. 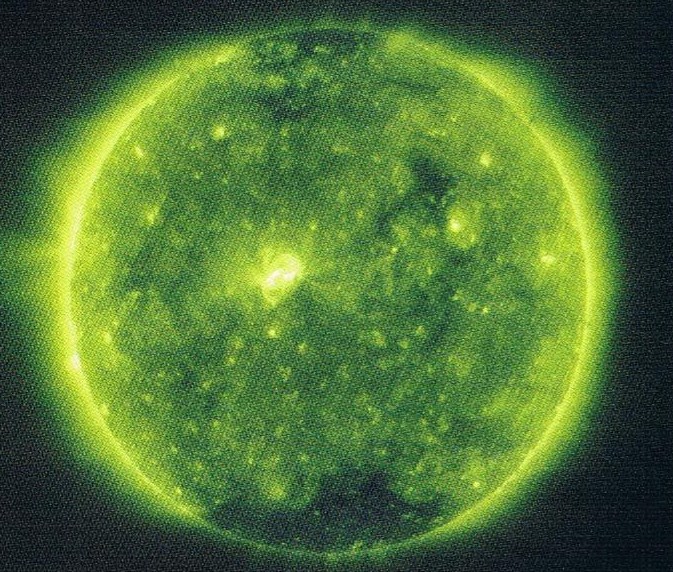 And as they stroll (or fly or swim) they may discuss - as the neutronium solar beings in Proof discuss - the preposterous notion that life might exist on those lumps of cold matter, the planets. 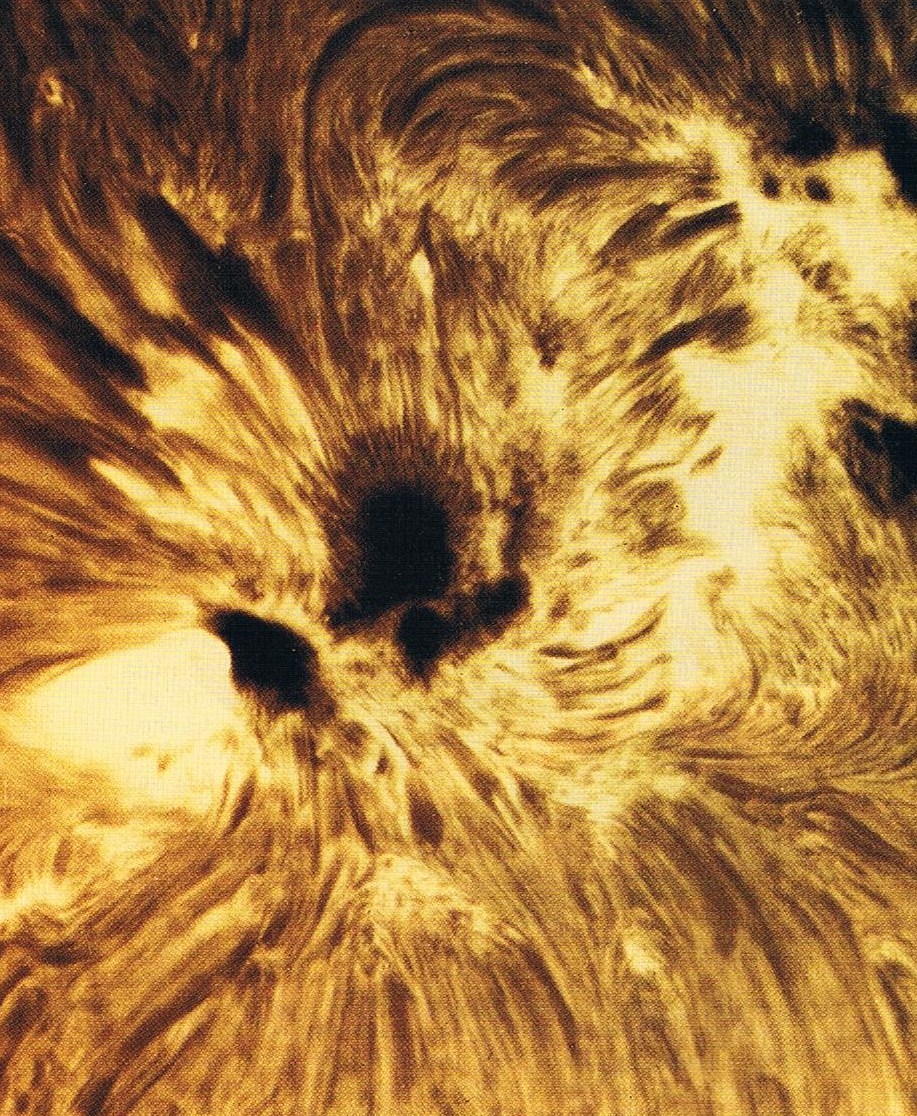 And because time may run at a faster rate for them, the furious rage of forces may seem gentler to them.  Recall the neutron-star inhabitants of Dragon's Egg, who live through the rise and fall of empires while the human investigators of their world take a nap.  There's room, you see, for plenty of normal life between one solar flare and the next.

So what have writers done, using this scope for story?

yarns of the sun

Because of their place at the very frontier of the imagination, stories about the Sun tend not to date as do tales set on (for example) Mercury or Mars.  In other words, way-out notions about the Sun are less likely to be disproved, than our views of the planets.  So the Sun fits uneasily into the science-fictional distinction between Old Solar System and New Solar System.  We have a rich crop of tales that can't be called either OSS or NSS.

Star Maker includes a chapter about suns possessing consciousness in themselves.  Then there's the literature about life on, or from, the Sun.

Sundiver tells of solar life investigated on location.  In Out of the Sun (set in an observatory on Mercury) a solar being is accidentally ejected by a flare and impacts the innermost planet.  The solarians in Sunfire! travel there deliberately.  The Flames tells of one who gets as far as Earth, and communicates with a human.

Then we have the stories about the physical Sun itself rather than the idea of native solar inhabitants.  The Paradox Men has a suspenseful look at the life human workers must lead during their stint on a power-station floating on the Sun.  The episode is one of the most dramatic in science fiction.  (A Sun Station is more briefly described in The Crucible of Power.)  Less strenuous is The Weather Man with its "sessile boats" to control solar output and hence regulate Earth's weather. 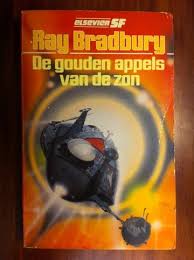 And then there's The Golden Apples of the Sun, which tells, poetically, of a brief skimming in-and-out swooping dive at the sun in a (refrigerated!) ship.  The author has the "Whatever" attitude to science: that's to say, science is something to do with... whatever... the details matter little, the author doesn't have to know them so long as he has a feel for the ultimate magic of reality, somehow.  What matters is the meaning, the purpose of the trip.  It is to scoop (with some super-tech Cup) a sample of solar stuff.

Now, of course this Cup cannot be material - it must be a moulded force field of some sort, like the magnetic "bottles" in a fusion laboratory; but Bradbury either does not know this or is happy to leave the reader to assume it.  What matters to him is not how the thing is done, but why.

A million years ago, thought the Captain, quickly, quickly, as he moved the hand and the Cup, a million years ago a naked man on a lonely northern trail saw lightning strike a tree.  And while his clan fled, with bare hands he plucked a limb of fire, broiling the flesh of his fingers, to carry it, running in triumph, shielding it from the rain with his body, to his cave, where he shrieked out a laugh and tossed it full on a mound of leaves and gave his people summer. 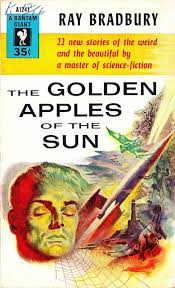 ...So here we are again, to-day, on another trail, he thought, reading for a cup of precious gas and vacuum, a handful of different fire with which to run back up cold space, lighting our way, and take to Earth a gift of fire that might burn forever.  Why?

He knew the answer before the question.

At this stage the reader may well ask: is this going to be one of Bradbury's mordant tales?  Are they going to fail?  Get snuffed out? 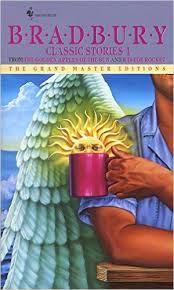 The Cup dipped into the sun.  It scooped up a bit of the flesh of God, the blood of the universe, the blazing thought, the blinding philosophy that set out and mothered a galaxy, that idled and swept planets in their fields and summoned or laid to rest lives and livelihoods.

So have they done it?  Have they got away with it?

...The audio-thermometer screamed.  The refrigerator system kicked; ammoniated fluids  banged the walls like blood in the head of a shrieking idiot.

He shut the air-lock door. 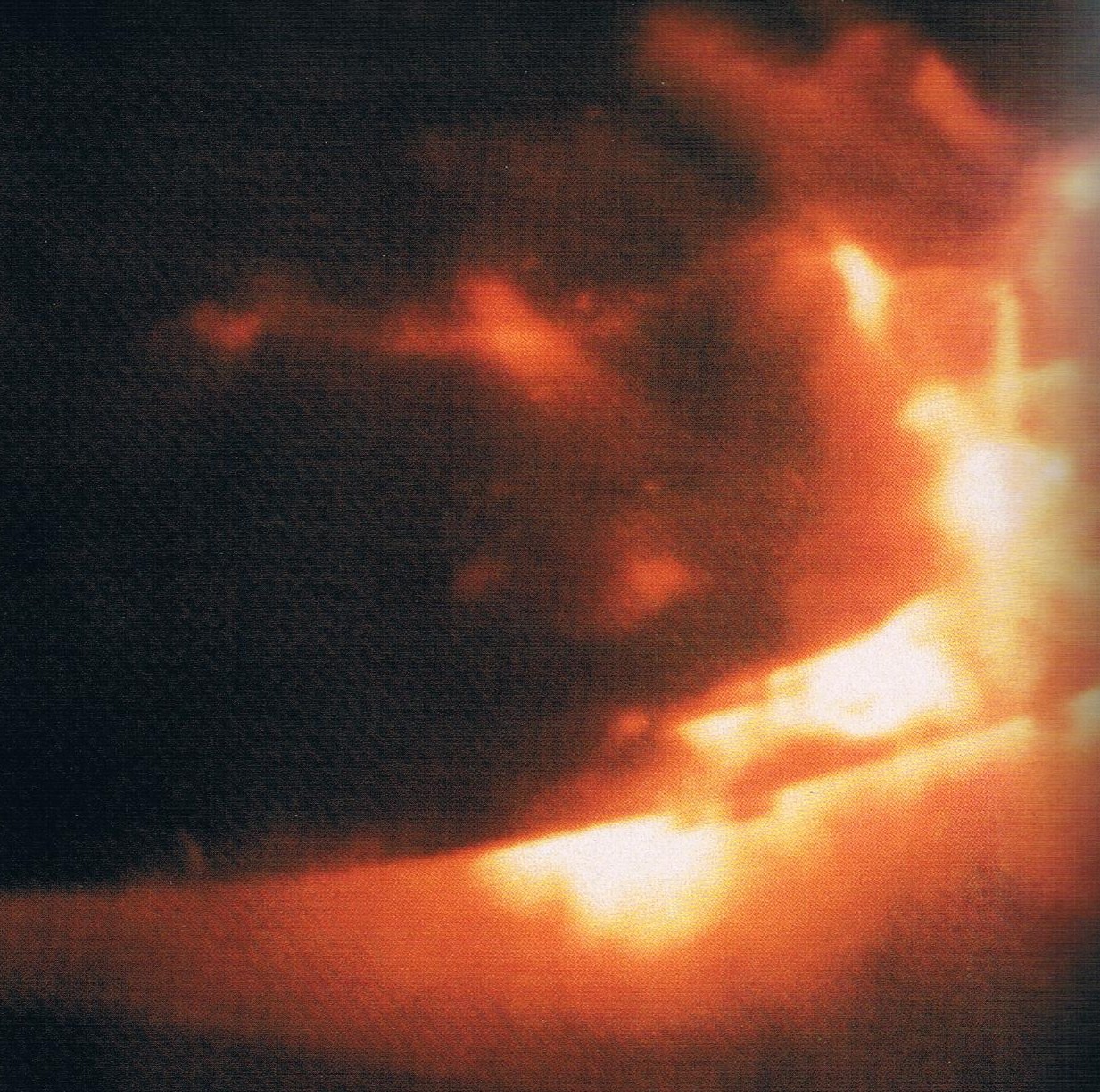 Technology achieves final liberation from itself in Children of the Sun, which tells of human bodies converted into wave patterns, freed to zoom and frolic and adventure in the Sun as pure naked sense-perception.  Captain Future undergoes the change and experiences "the hissing scream of world-high tongues of flame, the deep booming thunder of solar continents and seas of fire... the heaving mountains, the seas and plains and storming clouds of fire..."  He plays among the upper mists of the chromosphere, then dives and "scudded along on the crimson tides, whirling, dancing, tossing high on the crests, probing the darkest ruby of the whirlpools."  Lower still, "Upheaval, chaos, beauty unimaginable, strangeness beyond belief.  An immensity of golden flame, denser than those outer layers, writhing, surging, lifting up huge molten ranges that clawed at the crimson sky and then slid down in titanic cataclysm to be lost in a weltering plain of fire." 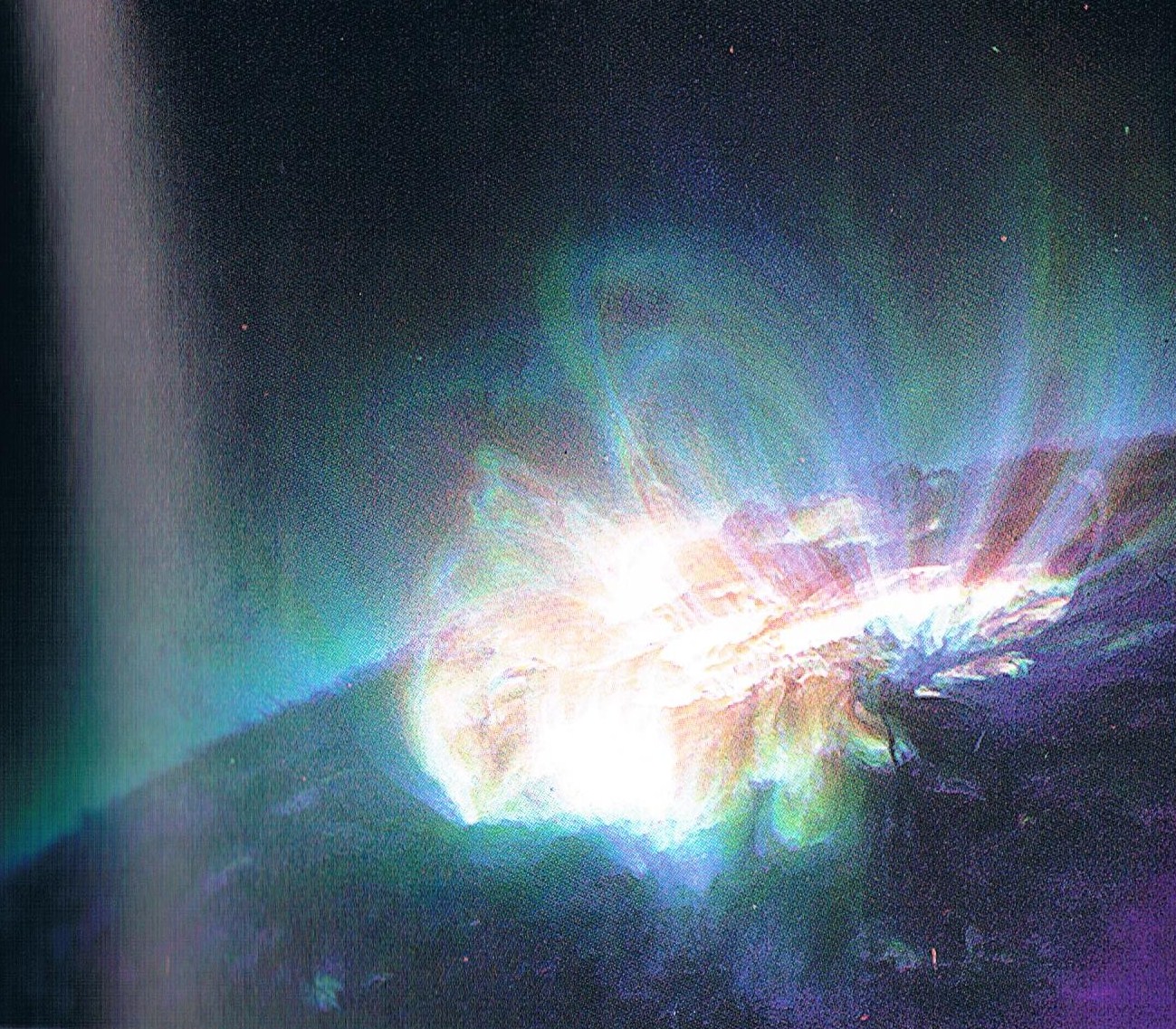 In between these tales which acknowledge the findings of solar physics, and the old naive idea of the Sun as an ordinarily inhabitable world, is the short story Phoenix.  This, for once, is a Sun story which can be labelled OSS.  It is a haunting little tale which might have been written by H G Wells during his classic sf period, though in fact it was written decades later by the great Clark Ashton Smith.  In this adventure of the far future the Sun is portrayed as combustible like coal, rather than an object powered by nuclear fusion.  It has burnt out, and the humans of a frozen far-future Earth make one last desperate attempt to re-ignite it.

mountains on the sun

Now take one step further from the Phoenix scenario, and suppose that the Sun cools into a solid world and stays that way - a real solid world, with landscapes.  Never mind the gravity issue; just imagine a habitable world that size.  The time-vision of Finality Unlimited gives us a couple of paragraphs' glimpse into A.D.1,000,000,000:

...The solar system had altered profoundly.  The tidal drag had brought the moon and Earth together millions of years before, with a collision that made them fuse, flame, and create a new star.  The star circled around the old, dying sun which, as it cooled and solidified under the light of the new star, developed its first species of life-forms...

...He was a nitrogenized metallic spore, clinging to the peak of a jagged, titanic range of mountains fifty miles high, composed of volcanic magma, and overhanging an acid sea.  He was the life primeval, from which in billions of years of later time would arise the deathless, indestructible, purely intellectual and metallic beings who would shape the destiny of the cosmos for the inheritance of still more complex life-forms of still later trillions of years of ultra-time...

Unfinished business: no one has to my knowledge written a full-blooded refusenik OSS epic set on a habitable Sun, using either the lax science of the OSS or the excuses which are available for a "transferred interpretation" as explained above.  Writers - think of the size, the range, the possibilities!

For the effect upon Earth and Mars of an increase in the Sun's radiation (killing the former, giving life to the latter) see the Diary for 4th December 2016.

See the OSS Diary, 31st January 2017 for the Solarians trapped on Earth in Olaf Stapledon's The Flames.

For a similar idea regarding Solarian life trapped on the moon, see the
OSS Diary, 23rd February 2017, regarding Colin Wilson's The Mind Parasites.

For Hal Clement's Proof, see Neutronium City on the Sun.