The legendary innermost planet, Vulcan does not exist, but stories about it do. 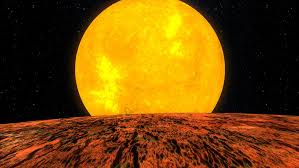 Harlei:  Is that why you've put it in brackets in the site navigation bar?

Zendexor:  Yes - you see, I want to eat my cake and have it.

That's to say, I want Vulcan, the infra-Mercurian planet, to be on our OSS website, but at the same time I wish not to detract from Mercury's status as the innermost planet.

Hence the brackets.  In effect, what those brackets are saying is:  "Go ahead and think of Vulcan as the closest planet to the Sun while you're looking at it.  But when you turn your attention to Mercury, shift to thinking that that's the closest to the Sun, because there's nothing between it and the Sun - except something in brackets, and that doesn't really count."

Stid:  Is all this your idea of rigorous logic?

Zendexor:  No, it's flexi-logic, or hedging one's bets.  To continue: 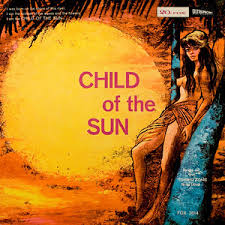 With one notable exception, which I'll get round to, the surface of Vulcan, because of its closeness to the Sun, is not regarded as habitable by those few authors who have set stories there.  In the Vulcanian context, these authors are "evaders".  They don't satisfy a reader's urge to explore a flourishing Vulcanian surface culture.  Their focus veers off from that ideal.

Consequently, explorers in those stories have to have their adventures in caverns (as in Child of the Sun) or in the planet's spherical hollow interior (as in Outlaw World).

And there seems to be no novel set primarily on or in Vulcan, though Outlaw World has its climax there.

The Vulcan of Child of the Sun is without organic life, though it is the haunt of another kind of life.  The Vulcan of Outlaw World, on the other hand, has a fertile interior, a Pellucidar-type hollow, lit by a solar beam that shines through a crater opening, as Captain Future and his crew discover when he steers his ship, the Comet, down through that opening:

The whole concave inner surface was blanketed by dense, pale-green jungles.  At one point glimmered the waters of a large yellow lake, into which ran several small, glittering rivers.  Wispy clouds floating in the inner vault, and the whistle of air outside the falling Comet, told them that this hollow world had an atmosphere...

...The little ship whistled down toward the dense green jungle.  Curt found a small opening and landed there.

The air-test dials showed that the atmosphere outside was hot, but breathable.  Carrying their atom-pistols, they emerged...

They were standing on pale grass amid tall, grotesque ferns that towered high above their heads.  Spiky shrubs bearing great golden flowers grew in the greenish gloom beneath the ferns.  Big, bright-winged insects buzzed past.  The oppressively hot air had a rank jungle smell.

Soon they meet the natives:

With a chorus of fierce yells, scores of men poured out of the jungle all around them....  These men were pale-skinned and had pure white hair.  They wore white leather tunics, and carried spears.  White savages, natives of Vulcan's inner world!

But there is one story I know of, that does get me onto Vulcan properly - and I mean the actual surface - and gets me there without my having to wear a helmet, so that my viewpoint is every bit as free and easy above ground as Captain Future's is in the world's interior.

Stid:  This story is by someone I've never heard of, I'll bet.

Zendexor:  I expect you've heard of him but his reputation doesn't stand that high.  So we have the paradox, that in The Flame Breathers a far-less-good author beats the great Hamilton and Brackett in the Vulcanian stakes.

Harlei:  It's the approach that I particularly like.  The sighting and the first approach to this unexplored world...

Zendexor:  If you put it that way, readers will think that it's a comparative let-down when one gets there, but that's not the case.  But I agree with you, Harlei; the approach is classic above all.  This is the way to explore a Solar System: go and nose around and find out what's what when you reach it!  And with an organization so loose, so free from Mission Control, that you can have arguments on board ship about what to do...

If indeed there was any Vulcan.  If a landing on what might be a fiery surface were physically possible...

Another day passed.  And then another and another.  We were all three tense, expectant.  There was little apparent motion in the great starry cyclorama spread around us - just the slow dwindling of Earth and Venus, the monstrous Sun shifting slowly to the right with the starfield behind it progressively becoming visible.

"We're chasing a phantom," Torrence said, on the fourth day, with the Sun now almost abreast of us and some twenty-four million miles distant...

Bathed in the full, direct Sun-rays our interior air had heated into a torrid swelter...

...And then at last I saw Vulcan!  A little round, lead-colored blur.  Just a dot, but in a few hours it was clear of the intervening Sun.  No question of its identity.  Vulcan.  The new world.

Harlei:  This is the kind of thing we'll never have for real, alas...

Zendexor:  But at least we've got it in literature!  Hip hip horray for authors who give us such happy-go-lucky, finding-out-on-the-spot, spontaneous exploration.

The advantages of this approach are overwhelming.  Explore the System in this style and you'll find that every planet is a surprise, like Xmas and birthday presents are supposed to be.

...It was a busy time, for me especially, those next ninety-six hours.  I was soon enabled to calculate, at least roughly, that Vulcan was a world of some eight hundred miles diameter, with an orbit approximately eighteen million miles from the Sun.

"It has an atmosphere?" Jan murmured anxiously.

The atmosphere presently was visible.  No need for us to use the pressure-suits.  I envisaged at first that upon such a little world gravity would be very slight.  But now the heavy, metallic quality of its rock-surface was apparent...

A word or two about the situation after they land: I can assure you they find beings of various species and cultures...

Stid:  With deep sun-tans, I should think.

Zendexor:  The author doesn't ignore the insolation issue... it's pretty clear, though not explicitly stated as far as I can recall, that Vulcan is tidally locked to the Sun - as one would expect - and life is confined to the night side.  It's still fairly light there, and again this isn't explained, but surely one can invent one's own plausible excuses: on a small world with a substantial atmosphere to scatter the sunlight...

In short, this author has enlisted this reader on his side.  I've been turned into the author's ally, predisposed to excuse-manufacture, and when a reader gets into that frame of mind it means he's fairly hooked.

For the great Vulcanian surge of 3rd September 2018, see the Diary for the day after.

For suggestions as to what the ideal Vulcan novel might contain, see the Diary entry, Irresistible Vulcan.

For remarks on Thomas Levenson's The Hunt for Vulcan, see the History of Hopes article in the Diary for 18th October 2022.