the far future in the old solar system

What's "Old" about the far future?  Answer: plenty - if it's the traditional, cooling-sun far future we're talking about.  That's quite out of date.  Not at all in agreement with current theory.  Scientists now believe that our sun will get steadily warmer, not colder.  In a few hundred million years we'll be roasting, if we don't move the Earth into a wider orbit or emigrate...  whereas writers of science fiction classics took the opposite view.  And in doing so - in pursuing their erroneous idea - they gave us some magnificent stories. 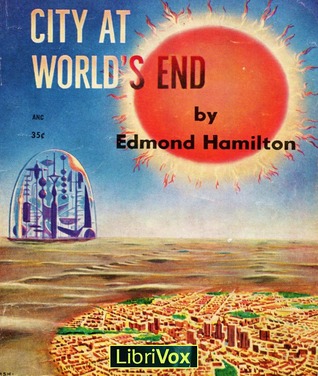 Harlei:  Yet the Sun will eventually grow cold, won't it, in the end?

Stid:  In the very end, yes, the Sun will grow cold and dark.  But current theory insists that it will get very much hotter first, while still on the main sequence.  So hot, that eventually - maybe in half a billion years, maybe slightly more - Earth will become too torrid to be habitable for human beings.  That's not at all the kind of doom foreseen by classic science fiction writers.  Quite the contrary.  From The Time Machine onward, tales of Earth's far future traditionally saw us shivering towards extinction as the Sun's rays got feebler and feebler...

Stid:  Thank you, Harlei.  Except, as you say, Hothouse, which is the odd one out, all the tales I mentioned - all the shiverers - are scientifically refuted now.  (Hothouse itself is astronomically wrong for a different reason - the impossibly close-yet-stationary Moon.)

Anyhow, knowing Zendexor, I feel sure that he will use such scientific obsolescence as an excuse to classify all these old stories as suitable material for this website.

Zendexor:  Well, after all it does seem right somehow, that the Sun should gradually cool, like a fire going down.  I know it's not true, but here's one of the awkward cases in which the truth is so counter-intuitive, it clashes with imaginative truth...  with what makes for a good story.

And there are so many cracking good stories!  Beautiful old cooling red suns, as in City at World's End and The World of the Red Sun...

Stid:  Let's note, though, that not all the tales of Earth's extreme far future mention the Sun's development.  Come to think of it, even The City and the Stars, which is set a billion years in the future, gives us a sun just like today's as far as the reader can tell, whereas there's been plenty of change on Earth itself: the oceans are gone and the planet is mostly desert.  The Moon is gone, too... I seem to remember its orbit was decaying and it had to be destroyed.

And here we have another thing writers often used to get wrong.  They assumed the Moon was gradually approaching the Earth.  The truth is the exact opposite: it's gradually receding from us.

Harlei:  James Blish got it right in Midsummer Century.  His protagonist in 25,000 A.D. mentions that the Moon looks smaller...

Zendexor:  Let's not get bogged down in detail here.  I want to emphasize the magnificent sweep of the Far Future.

For example, the enchantment and the melancholy awe which pervades Seeds of the Dusk:

There was little motion except that of keen, cutting winds, shifting dust, and occasional gusts of fine, dry snow.  The white, shrunken Sun rose in the east, to creep with protracted slowness across the sky, shedding but the barest trace of warmth.  Night came, beautiful and purple and mysterious, yet bleak as the crystalline spirit of an easy death.

In this tale Gallun implicitly invites an analogy between the climatically harsh old Earth, which still retains visual beauty, and the harsh inhabitants, who have grown destructive and cruel in their determination to survive but who yet retain traces of finer qualities. 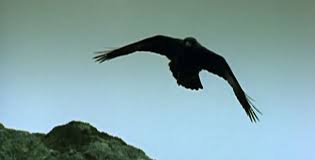 We find a three-cornered struggle between (1) intelligent crows, (2) the Itorloo or descendants of man, and (3) an intelligent spore plant which is invading the Earth from Mars.  Kaw, the crow, is the first to discover evidence of the invasion:

Around the growth, thousands of ant bodies lay dead, and from its vicinity other thousands of living were retreating.  Kaw eyed these evidences critically, guessing with wits as keen as those of a man of old their sinister significance.  He knew, too, that presently other spore-pods would burst with loud, disturbing noises.

Kaw felt a twinge of dread.  Evolution, working through a process of natural selection - and, in these times of hardship and pitiless competition, putting a premium on intelligence - had given to his kind a brain power far transcending that of his ancestors.  He could observe, and could interpret his observations with the same practical comprehension which a primitive human being might display.  But, like those primitives, he had developed, too, a capacity to feel superstitious awe.

Kaw also feels some awe towards the dreadful Itorloo, the Children of Men.  Nevertheless he reckons he must alert them to what is going on.  Only they have the power to do something about it.

...Kaw was aware that the Itorloo had no love for any but themselves.  But they were more powerful than the winds and the movements of the Sun and Moon themselves.  They would find a swift means to defeat the silent danger.

And so, till the gray dawn, Kaw flew on and on, covering many hundreds of miles, until he saw a low dome of metal, capping a hill.  The soft half-light of early morning sharpened its outlines to those of a beautiful, ebon silhouette, peaceful and yet forbidding.  Beneath it, as Kaw knew, was a shaft leading down to the wondrous underworld of the Itorloo, as intriguing to his mind as a shadowland of magic.

Harlei:  Kaw is quite a character.  Once you've read the story, you never forget that bird and the way he meets treachery with treachery.  And the harsh scream of a crow penetrates the air of the ancient planet with a defiant echo... that somehow makes us shiver with the vastness of Time.

May I add that the story gives us a view of the far future not only of Earth but of Mars.  The man called Zar, captured by the invading Martian plants, remembers old knowledge of the days hundreds of thousands of years before - but still in our far future - when men still had space travel... and in that context (perhaps under the mental influence of his captors) he thinks of the plants as "people": 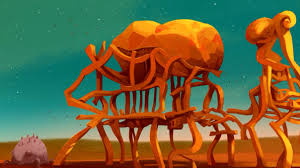 ...These wondrous people of the dusk of worlds had survived all animal life on the Red Planet.  They had spanned Mars in a vast, irregularly formed network, growing along dry river beds, and the arms of vanished seas.  They had not been mere individuals, for they had cooperated to form a civilization of a weird, bizarre sort.  Great, hollow roots, buried beneath the ground, had drawn water from melting polar snows.  Those roots had been like water conduits.  A rhythmic pulsation within them had pumped the water across thousands of miles of desert, providing each plant along the way with moisture, even on that dying and almost dehydrated world.  The canals of Mars!

...And through the living texture of those immense joining roots, too, had doubtless flown the impulses of thoughts and commands - the essence of leadership.

Strange, wonderful times those old explorers had seen.  Cold sunlight on bizarre ruins, left by extinct animal folk.  Thin air and arctic weather, worse than that of Earth in the present age.  Death everywhere, except for those vegetative beings grouped in immense, spiny, ribbonlike stretches.  Dim shapes at night under hurtling Phobos, the nearer moon, and Deimos, her leisurely sister.  Zar did not know just how it happened, but he had heard that only a few of those human adventurers had escaped from the people of Mars with their lives.

Zar's thought rambled on in a detached way that was odd for him...

scope of the far future

Zendexor:  And we could ramble on too, for ever gawping at the vistas such stories offer.  But it's time for us to admit that the OSS Far Future is much too colossal a topic for a single page.  In fact I vote we write a book about it instead.  An e-book, to be announced on this site when available.  So what do you say?  Shall we plunge into that project?

Stid:  First a question about scope.  The Far Future lends itself to fantasy, or at least to a blurring of the distinction between sf and fantasy, because, I suppose, the idea is that after long ages the barriers between our categories of thought will crumble...  So are we going to include The Dying Earth and Zothique in our survey?

Zendexor:  At present I don't envisage trying to do those masterpieces full justice, for they are, as you have just reminded us, fantasy and not science fiction - though sf elements can be found in The Dying Earth, especially in the story Ulan Dhor...

Stid:  A wise decision - to keep our critical ambitions within bounds.  So we shall concentrate on sf proper.  Now, so that I know what I'm letting myself in for, can you tell me what tales we will be exploring?

Zendexor:  My alphabetic list of sources runs as follows:

An Adventure in Futurity, Alpha Ralpha Boulevard, The Awakening, The Book of the New Sun, The Book of Ptath, The City and the Stars, City at World's End, Epilogue, For A Breath I Tarry, Hothouse, Last and First Men, Last Men in London, Midsummer Century, Night, The Night Land, Old Hundredth, Seeds of the Dusk, Ten Million Years Ahead,The Shadow Out of Time, The Star Kings, The Time Machine, Twilight, Under Old Earth, Wanderers of Time, The World of the Red Sun, A World Out of Time.

Harlei:  What was your cut-off date, may I ask?  I mean, when does the medium future end and the far future start?

Harlei:  Sounds right.  Of course in some cases it's impossible to be sure...  for example the rural city-less England in After London.

Zendexor:  I'd call that the "medium future".  Maybe a thousand years on.  Who knows?  A medieval-type society has returned to England.  No dates given, but somehow I don't see it as into really deep time.

Stid:  And The Shadow Out of Time - isn't that mostly about the past?

Zendexor:  Yes but not entirely.  It contains glimpses of the far future.  Glimpses which the protagonist would prefer not to have had...

For the weapon known as the Diskos in The Night Land, see Religion in the Old Solar System.

See the OSS Diary for 9th November 2016, for the illustrated zoologies of the future, After Man by Dougal Dixon, and The Future is Wild by Dougal Dixon and John Adams.

For the culture-layer of far-future Earth turning into geological strata see the quote from Gene Wolfe's The Sword of the Lictor, in the OSS Diary for 28th January 2017.

See the Diary, Poul Anderson and a Far-Future Moon, for what might happen to our satellite during the next three billion years.

For a far-future solidified Sun with evolving life, see the page-section, Mountains on the Sun.

For Edmond Hamilton's Ten Million Years Ahead see the intelligent plants page and the extract in What to see on Earth.