what to see on
pluto 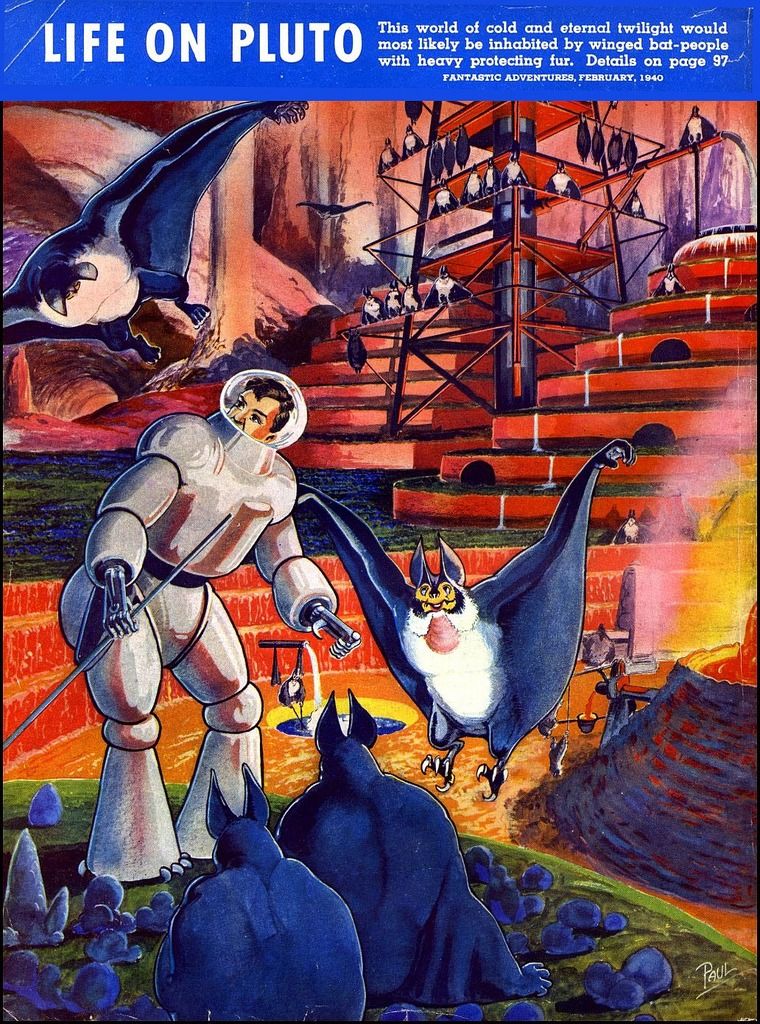 sniff the air on pluto

...In that first confused glimpse, my eyes did not take in the details of the landscape.  Stretching out before me was a broken plain, fantastic and irregular at the floor of a glacier; huge bluish white masses, piled and tumbled together in crazy disorder, were varied by smooth glistening spaces as flat as a table; twenty-foot mounds and hummocks stood up here and there, and long twisted furrows or cracks spread a spidery black network across the scene; while the prevailing hue, in the wintry gray light of the far, far glittering point of a sun, was that eerie, spectral mixture of blue and white, reminding me of the cloud-filtered moonlight peeping down upon a lake of ice.

But all this I was to notice subsequently; in the first bewildered moment of my escape, there was only one thought to dominate my mind.  I must free myself from the gas-mask, whose weight burdened my shoulders, whose confinement had nearly asphyxiated me!  I must unbare my nostrils to the open winds, must drink a reviving draught of actual air!  True, this alien atmosphere might be poison to my lungs; true, the cold might freeze the very blood within my veins – yet I must take the risk; indeed, I was frantic to take the risk, and clutched at the fastenings of my mask with blind desperation.  And within a few minutes, though at first my nervous fingers would not gain any hold, I saw the mask yielding, and felt the burning chill of the outer air against my cheeks.

Colder than ice, the air was yet less cold than I had anticipated.  It did not freeze my flesh, nor did it strike my lungs like a blast of poison; rather it was the most delicious, life-giving breath I ever drew.  It seemed to me that the atmosphere was lighter than on earth – light as on some high mountain peak; but it required no chemical analysis to show that it contained oxygen!...

Keene started back, realizing that a gray-black, flat-crystalled, dully shining lump was almost at his feet.  He stared at the crawling masses; they had come, apparently, from beyond a jutting wall of rock to his right.  The floor was speckled everywhere with them, and now and again one slipped with a faint tinkle over the edge of the central pit.  But there were hundreds more; one couldn't wait here until the floor had cleared.  He skipped aside; another had silently approached almost to his feet.

the marching mountains of pluto

...he stood petrified for a moment on the rough ice, staring northeastward.  He and his companions looked frozenly up at an awful peril thundering down on them.

The Marching Mountains!  The vast thousand-foot high range of icy hills that was but one of similar glacier-ranges which perpetually moved around the planet!

The forefront of the appalling walking ice-range was a towering, gleaming cliff that was only a few hundred yards from them.  And the whole cliff was advancing on them, moving at an incredible speed of many yards a minute, pushed forward by the vast glacial masses of ice behind it.  From the icy moving cliff fell great bergs and masses of ice, over which the main range moved crushingly as it came on.

"There is no use running from the Marching Mountains," cried Tharb hopelessly.  "We cannot get out of their path and they will soon overtake us."

A level space, nearly circular, a mile wide.  Surrounded with a curving ridge, it was scattered with heaps of crumbled stone.  The piles, Ellis thought, were too regular to be anything save remains of buildings, but buildings that had been ruins five hundred thousand years, or a million.  Where had the survivors gone - if there had been survivors?

The question was answered without words.

The silent music swept them on... across the dead mounds, towards the cyanic-shining, vertical wall of the pit.  It carried them out of the ruins, upon a worn and ancient road.  And the road sloped downward, curved into a vast crevice whose jagged walls glowed with light of sapphires.

From the crevice they passed into lofty and interminable vaulted caverns, whose smoothed walls yet bore the mark of tools.  Dust of eons lay thick upon the floor, swirled up chokingly about them.

The compelling, noiseless chords led them downward once more, and into a lower system of artificial caverns.  Here the rock was brighter still, glowing with radiance softly electric-blue, shadowless and unearthly.  The air was heavier here, and warmer, and the floor was clear of dust.

They were drawn into a colossal space, blue-walled, domed and circular, and far out across its floor.  The mad music abruptly ceased its throbbing in their brains.  The journey was ended.

a monster in the sea of avernus on pluto

"It's a bibur - one of the greatest and most terrible sea-monsters of our world!" yelled Tharb.  "Paddle away!"

But their attempt at retreat was too slow to be of any avail.  That rippling came closer, and they could clearly see it was caused by an enormous body swimming beneath the surface.

Then out of the moonlit sea a huge living thing broke surface.  It was of brontosaurus bulk, its immense, sleek, wet, furry body urged forward by webbed paws, its snaky neck ending in a snarling head of great fangs and blazing red eyes...

…Their heads were roughly triangular, widening upward from a pointed chin and resting on thin, yet strong, necks above equally strong and spindly man-like bodies.  They were mainly composed of elements which became solid only at very low temperatures.

Thus it was that one of these beings sat before a radio-like device and perspired in the extreme cold of the room.  His long pointed ears were depressed by the weight of a shiny metal cap and his too-large eyes held a look of worried consternation…

The wearer of the cap shot a series of rapid sounds at the other occupant of the room.

He said, in effect, “I have received thought-emanations from the direction of the great plain, rather garbled.  The being is probably a giant from some other world, for his thoughts are alien and he evidently considers it within his power to crush the mountains which house us!”

The other made a negative gesture with a slender hand.  “Don’t you think it more likely that it is a  trick of the enemy, Gor?  They have tried such things before, you know.”

Gor was quiet while he peered into the eyepiece of an instrument; then he replied, “We will soon know…  You are radiating sorrow, Bakar.  What troubles you?”

Bakar sighed.  “I was thinking of the ancient pictures of Ahndee in the days when its orbit was much nearer the Sun, and we, the inhabitants of Ahndee, were happy in our beautiful cities.

“Now, the two remaining great nations hide, one from the other, beneath the mountains, and neither can break the defenses of the other, but we still try.  What is the use of it?”

“Careful, Bakar,” Gor looked sternly at the other.  “The Four may have you in the thought beam…”

industrial base on pluto

…There was a base there for the heavily-shielded R-40’s that carried the uranium ore from the mines.   Behind it there were black mountains sheathed in ice, and all around it was a plain that glittered in the starlight, white with frozen air.  The base itself was one vast sunken dome, for the ships and for the men that served them.  But to one side was a second dome, and above it was a group of towers somewhat different from those of the base proper, squatter and more massive.  This place had been used once.  Since then it had lain quiet, its contents sheathed coccoon-like in protective webs.

Now men invaded it again, stripping away the sheathing, checking, testing, making delicate adjustments.  And underneath the dome the glass dynamos awoke, and the solid granite of the plain was shaken…

…She stopped suddenly, and cold, clammy fingers of fear rippled along her spine.  The dark shadow before her… was something tall and thin.  Something that seemed alive, weaving back and forth…  It seemed about ten feet high and six inches through, and was made up of sections like a string of sausages.  Then over to the right she saw more of them – a regular forest.

Like the snapping of a brittle icicle, the tension broke.  They were plants.  Some form of natural flora, swaying to and fro in the icy currents of that dark sea…

a buried giant on pluto

The formation was an almost transparent wall of ice, lying at one end of a small frozen canyon.  The snow filtered down from the constantly dark purplish sky, and even though the heating unit in his suit buzzed faintly, generating warmth, Strickland felt a cold wave pass down his back.  He shined his torch at the wall and peered through the snow, vague expectation filling him.  Far back, behind perhaps ten feet of ice, he could see the outline of a figure, vaguely human.

Milgrim? he wondered.  Clyde Starr Milgrim, the first explorer beyond Venus in the early days of the tin ships and the rickety chemical drives…?

Now, nearly a century later, the Milgrim Scientific Foundation had raised enough money to send out search parties in an attempt to find some remains of the man or his ship and carry them home to Earth for fitting burial.  Strickland felt a peculiarly acute kinship with the cause.  His grandfather had ridden Milgrim’s first ship, The Black Star, out into the uncharted darkness beyond Venus.

But it could not be Milgrim locked within the ice, Strickland reasoned.  The figure outlined in frozen patterns of blue shadows was huge and grotesque and misshapen, nearly a dozen feet tall with a head that appeared bulbous and lopsided.  Strickland could not make out the face…

“We are passing now the fungoid plantations where the agricultural cyborgs are welded to their machines, similar to the pilot.  It is a pity you can’t see them now, but you can trust my word, and I’ll happily show you some illustrations when we get to the Capital; we are proud here on Pluto of our mechanistic efficiency.”

Diego dozed; time-dilation caused the worst sort of jet lag.  He awoke as the doors opened, and he looked outside in the frigid air.  Craggy mountains, red and white; the odd fungoid masses further out and what appeared to be agricultural workers, on stilts and augmented bone structures, loading the seashell-shaped masses into the open gondolas of freight cars.  The skyscrapers, the same colors as the mountains, blood red and snow white, but without a single window, reaching upwards into the sky.

“That’s enough looking around, professor, you’ll catch a cold with your warm, human blood,” scolded Captain Draque.  “Let’s go to the library where you can learn all about Pluto.”

“Hmm, okay; I always prefer to form my own impressions first and then do book research,” mumbled Diego.

“That is ill-advised here,” said Captain Draque sympathetically, “I understand you have your scientific method you so treasure, but we too here have our… political realities, and it is safer for you to read the material that we have prepared for you.”

“Ah… of course,” replied Diego, a chill running down his spine.  They entered into a smaller windowless trolley, which was crowded with pale Plutonian bodies, all of them hairless and with beady wide-spaced small black eyes…