One area where we don't have cause to grumble about the discoveries of the Space Age, is  trans-Plutonian Space.  In those outermost reaches, the New Solar System has not (yet) factually refuted the Old.  On the contrary, you might say that the NSS and the OSS are still running neck and neck...  Fantastic finds from the 1990s onwards have shown us a whole new family of icy asteroids, the Kuiper Belt, and at least one strange minor planet, the little red world Sedna, whose 11,400-year orbit exits the heliosphere and takes it far out into interstellar space; and hopes persist for the discovery of Planet X.  Hence though our main business on this site is with pre-space-age fiction, we can be thankful that reality, which is so often remiss, is (for once) reasonably up to scratch. 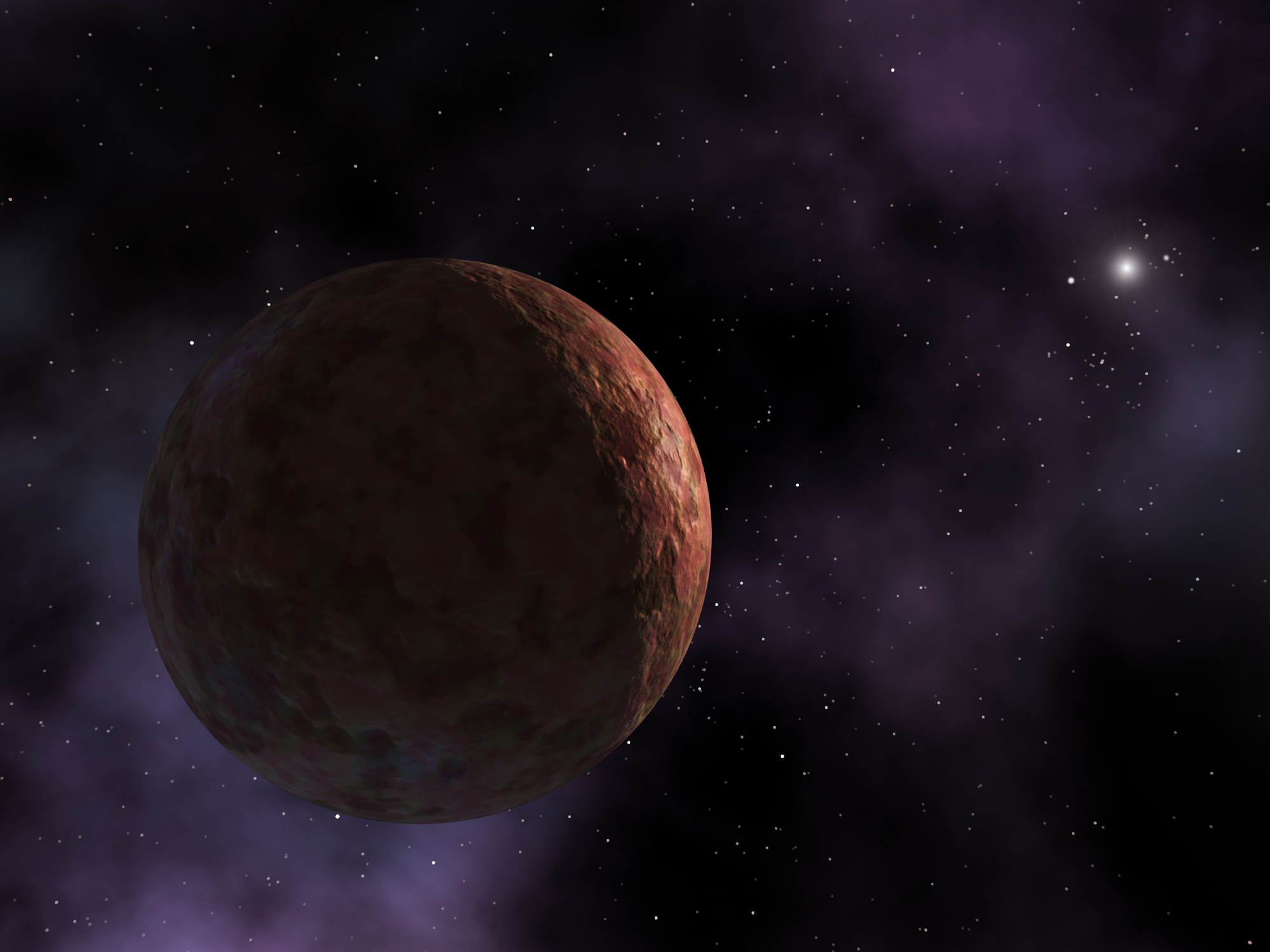 Stid:  And yet I'd still argue that the fringe of the System has been somewhat "deflated" by science, echoing the way in which poor old Pluto was demoted to dwarf planet.   Planet X itself, if it exists, won't be habitable or inhabited, you can bet on that.  In general, scientific effort has once again left us with less, not more, to romance about.  Reality has let you down again, Zendexor, and you might as well resume your usual belly-aching.

Zendexor:  I have two things to say to that.

First, it doesn't matter, so long as fiction supplies what reality so far lacks, as you can see on our page on trans-Plutonian planets, such as the Flame Disk in Solar Lottery and the world in The Tenth Planet (which would have to be re-named "The Ninth Planet" if it were submitted nowadays!).  After all, each world added to the System is a positive gain, whether real or not.  And reality may still catch up, whatever you say.

But - on to my second point - it is also my aim to argue that just adding more planets isn't the be-all and end-all. 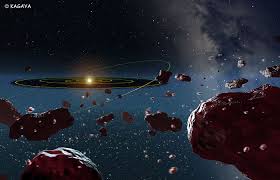 You see, however much stuff there is in it, our Solar System must come to an end sometime, somewhere.  We can't have an infinity of orbiting bodies, nor can the sequence of their orbits stretch to the point where they would come under the gravitational influence of other stars, for then they would no longer count as belonging to this System.

Therefore, rather than simply expect to add more and more worlds, it might satisfy us better if fiction or science were to arrange for the System's fringes to fade out into some special frontier zone with a character all its own.  In other words, not just "normal" interplanetary space but a somehow different, extra-fringy realm.

Years before the Space Age, science pointed the way to a suchlike uniquely fringy zone, with the theoretical concept of the Oort Cloud.  This is supposed to be a reservoir of cometary bodies extending out for most of a light year, perhaps more... and there, I suggest, you have the really great and truthful marvel, virgin territory for endless storytelling, awaiting any writer who chooses to grasp the opportunity.

Harlei:  Yeah, you could have hardy colonists gradually expanding out into the Oort Cloud!  You could do without the need for a big jump from interplanetary to interstellar exploration - the Oort Cloud culture could bridge the two! 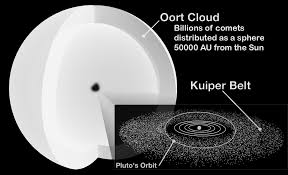 Zendexor:  You've got it.  A bridging environment.  Transitional.  Imagine it: the epic, rambling outward seepage...  For long ages the Oort civilization could remain a Solar System culture, very much extended but still part of our Sun's family.  Only after thousands of years, maybe, might some space habitat on the fringes of our Cloud make the transition to the fringe of an equivalent cloud around a neighbouring star.  With that cross-over, the age of interstellar exploration would begin, without any recognized dramatic interstellar travel as such - merely an incremental thing.

Stid:  And do you find that slow process more exciting than a big jump using space warps or wormholes or whatever?

Zendexor:  In a way, yes.  Because, you see, the gradual, respectful approach preserves distance.  Distance - in stories with warps or wormholes or easy stardrives - gets ignored, and then we lose something.  We lose the sense of the awesome infinitude of interstellar space: the vastness that laps against the edge of our Solar System.

Perhaps the best sense of that vastness in our literature comes from one paragraph in Last And First Men (p.289-90), where we hear of the only known attempt by the Last Men to venture beyond the borders of the Solar System: 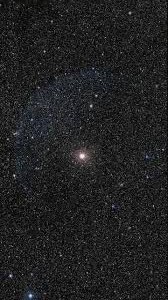 Recently an exploration ship returned from a voyage into the outer tracts.  Half her crew had died.  The survivors were emaciated, diseased, and mentally unbalanced.  To a race that thought itself so well established in sanity that nothing could disturb it, the spectacle of these unfortunates was instructive.  Throughout the voyage, which was the longest ever attempted, they had encountered nothing whatever but two comets and an occasional meteor.  Some of the nearer constellations were seen with altered forms.  One or two stars increased slightly in brightness; and the sun was reduced to being the most brilliant of stars.  The aloof and changeless presence of the constellations seems to have crazed the voyagers.  When at last the ship returned and berthed, there was a scene such as is seldom witnessed in our modern world.  The crew flung open the ports and staggered blubbering into the arms of the crowd.  It would never have been believed that members of our species could be so far reduced from the self-possession that is normal to us.  Subsequently these poor human wrecks have shown an irrational phobia of the stars, and of all that [is] not human.  They dare not go out at night.  They live in an extravagant passion for the presence of others.  And since all others are astronomically minded, they cannot find real companionship.  They insanely refuse to participate in the mental life of the race upon the plane where all things are seen in their just proportions.  They cling piteously to the sweets of individual life; and so they are led to curse the immensities.  They fill their minds with human conceits, and their houses with toys.  By night they draw the curtains and drown the quiet voice of the stars in revelry.  But it is a joyless and a haunted revelry, desired less for itself than as a defence against reality.

That is taking distance seriously.

Of course some writers of interstellar sagas simply have to ignore the real size of space.  They can't afford to cope with it any other way - for the sake of the story.  Great examples are Jack Vance and Barrington Bayley, whose masterly evocations of our vast universe, full of complexity and variety, are achieved at the expense of any real concern with cosmic distances.  The reader has to bring his own imaginative yardstick with him.  Such literary self-catering is a fair enough concession for the reader to make in return for the privilege of enjoying interstellar masterpieces such as Star King and The Garments of Caean.

But our discussion on this page has suggested how there could be another way for literature to tackle space.  Thanks to what's in Fringe Space, we could take the No-Warp way.  The Long-Way way. 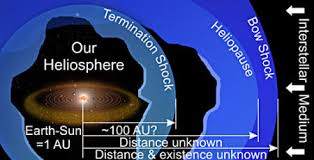 Stid:  And what could be in Fringe Space, apart from the occasional Oort comet?

Zendexor:  Aha, we can go into that on other pages.

For instance, we can talk about The Reefs of Space.  And there is also the possibility that our Sun may have a faint companion brown-dwarf star which in turn might have its own planet, as we find in Nemesis; we could at a pinch expand the term "our solar system" to include any such sub-stellar companion.

For the sinister trans-Plutonian world of the Gool, see the Keith Laumer page.

For Eando Binder's The Impossible World, see the Diary entry, The Outer Limits.