Getting Away With It - the most enviable of literary aptitudes.  A phenomenon insufficiently studied by critics. 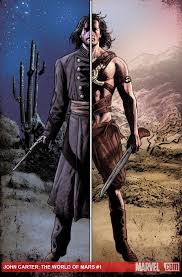 Zendexor:  True enough.  After all, what is the poor critic to do?  To point out that something shouldn't have worked, though it did - from an analyst's point of view it does rather amount to an admission of defeat.

The fatal temptation, then, is to deny that the dodge has worked.

To make that denial is to lose all opportunity to fathom the mystery of a writer like Edgar Rice Burroughs, who provides us with a classic case of gawi.

Two examples of gawi in ERB:

His subsequent non-use of that means of transportation to get himself out of scrapes.  His need of a spaceship to get him to Phobos despite not needing one to get him from Earth to Mars...

Stid:  A critic would say it's just the inconsistency of a careless writer.  But you, Zendexor, say it's gawi at work.  Now then - why can't the critic be right?

Zendexor:  You mean, why do I call it gawi instead of calling it failure?

I'll tell you - it's because failure, for some reason, doesn't occur.  Instead of failure, we go on enjoying the books and - this is the remarkable point, the key point - we put effort into making up excuses, justifications, possible theories to account for the apparent anomalies and inconsistencies.  For example, Richard A Lupoff in Edgar Rice Burroughs and the Martian Vision argues ingeniously that Barsoom and Earth are in different dimensions, so that Carter has to travel between them by some teleportation method, whereas Barsoom and Ladan (Phobos) are in the same dimension so he needs a spaceship to go from one to the other.  You see, a loyal reader is bearing the burden of excuse-making...   I thus argue in the Barsoom page: ERB's secret weapon is his ability to enlist the efforts of the reader on his behalf.  Explain that, and you'll have the secret of gawi.

Harlei:  I reckon there must be some kind of critical mass of invention which makes the reader realize that it's in his interest to keep the show on the road, mentally speaking.  Like banks or business which become too big to fail...

Stid:  ...So a bailout becomes necessary, and gawi is the bailout!  Excellent, Harlei.  We agree on this -

Harlei:  Though my tone is not cynical like yours, Stid.

Zendexor:  Cynical or not, if it works, it works.

For the origins of this discussion see the OSS Diary for 13th September 2016, onwards.

For gawi and Barsoom, where fast fliers are readily available yet the sense of distance somehow remains unimpaired, see the OSS Diary for 18th October 2016.  See also the OSS Diary for 25th January 2017, regarding The Chessmen of Mars.  See also Holiday from Explanation, for the bald statement that there are no thieves on Mars.