cities of the old solar system

Cities on other worlds!  Shining, colourful, awesome, beautiful, sinister or splendid - there's nothing like a city to adorn the cover of a science-fictional tale of the Old Solar System.

Stid:  Personally I doubt whether you'll find any city in the OSS that can compete with the Diaspar on the far-future Earth described in The City and the Stars.

Zendexor:  Or, for that matter, the Last Redoubt, the colossal pyramidal city in the far-future Earth described in The Night Land. 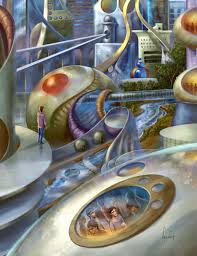 I'm going to have to restrain myself from starting an argument here, because, actually, I view these far-future Earths as possible material for this website.  Ridiculous though it may seem to you -

Stid:  You can say that again.  How can you view the far future as part of the Old Solar System?

Zendexor:  Briefly, because Earth is a special planet which bulges with such a range of dimensional extensions, with such vast will-be's and might-have-been's and could-be's, that it deserves special treatment.  But for now, let's leave all that.  Let's focus on the obvious, un-controversial cities of Golden Age fictional Mars, Venus, et cetera. 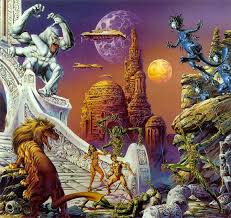 Harlei:  Hurry up and start talking about the cities of Barsoom.

Zendexor:  Edgar Rice Burroughs is good on cities - and not just Barsoomian (Martian) ones.  Let's briefly summarise what he gives us.  On Barsoom, native humans produced two main varieties of city, the ancient now-deserted kind and the new, walled, more practical kind - still splendid enough since "the usual towers, domes and minarets that mark all Barsoomian cities... only in recent ages have been giving way slowly to the flat landing-stages of an aerial world". [A Fighting Man of Mars, page 106.]

And within the modern category there are variations, for instance the domed "hothouse" cities of northern Mars, and the mountain-city of Gathol.

On Venus he gives us the memorable super-scientific city of Havatoo, which has separate sections for the dwellings of the physicists, chemists, warriors, psychologists and biologists.  The likeable Venusian biologist Ero Shan explains the layout - and in so doing, reveals a philosophy which has since become disreputable on Earth:

"Havatoo is laid out like the half of a wagon wheel with the Central Laboratories at the hub.  The main sections of the city are bounded by four concentric semicircles.  Inside the first is the civic center where the Central Laboratories are situated; this I have called the hub.  Between this and the next semicircle lie the five sub-districts I have just described.  Between this and the third semicircle lies the largest district, called Yorgan; here dwell the common people.  And in the fourth section, a narrow strip just inside the outer wall, are the shops, markets, and factories." 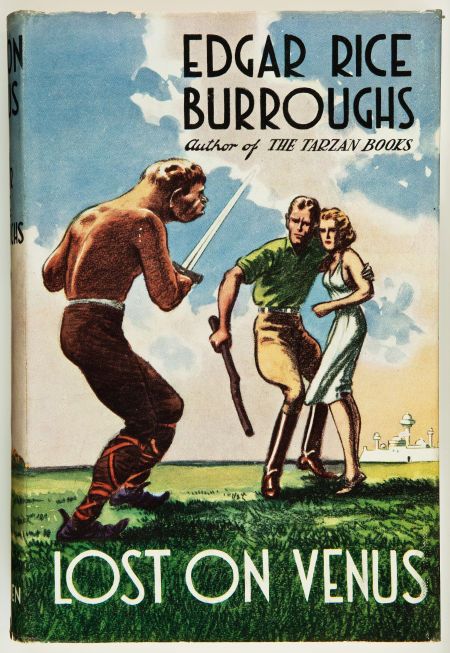 "Without man-made laws," Ero Shan corrected me.  "We are governed by natural laws with which all intelligent people are conversant; by applying eugenics intelligently we have eliminated the unintelligent..."  [Lost on Venus, p.125-6]

All this rationalism doesn't save the governing council of Havatoo from making irrational decisions.   In the face of the threat from neighbouring Kormor, City of the Dead, justice gives way to ruthlessness...  a vivid example of the paradoxes and surprises on Amtor, ERB's Venus.

Stid:  Not surprising it's surprising, given the planet's misunderstood geography!

Zendexor:  Yeah, most of its inhabitants are ignorant of one another - which is just asking for mutual culture shock.  So for instance we are also shown, in contrast to Havatoo, the remarkable tree-city of Kooaad.

And on Earth's Moon (or rather, in the Moon) ERB gives us yet another pattern: the conical city of Laythe.

Harlei:  I specially love the names of the Barsoomian cities - Ptarh, Dusar, Amhor, Jahar, Tjanath...  whereas Leigh Brackett's names for her Mars cities are not quite as good - not quite as Martian, in my opinion, as those of Burroughs.

Stid:  Except that the name "Helium" for a Martian city is a bit of a gas, don't you think?

Harlei:  Not while you're reading the stories, it isn't.  Incidentally here is a picture of Helium as imagined by the makers of the recent film John Carter.  Not a bad effort at a Martian city though the terrain is very un-Barsoomian: no ochre moss in sight, and the crags look more like somewhere in the Rockies. 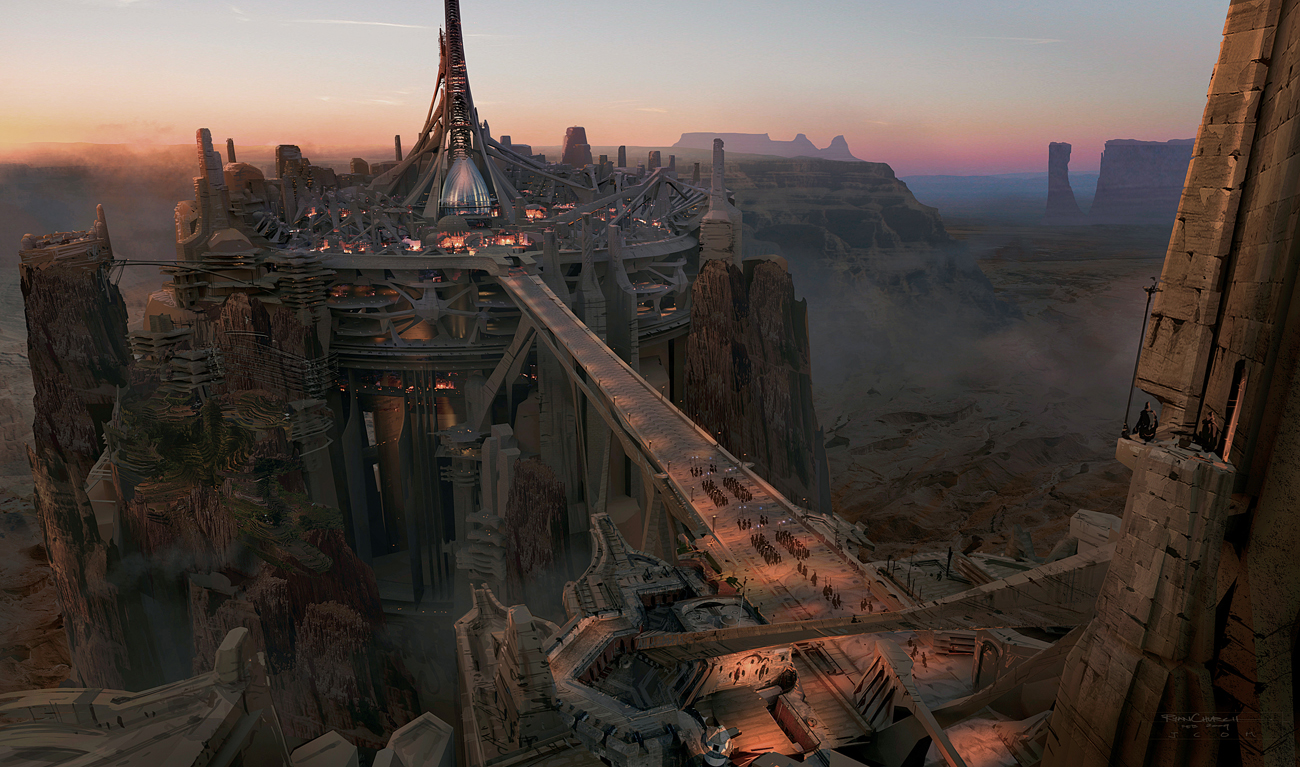 Stid:  I see the Barsoomians must have rebuilt the tower of Lesser Helium after its collapse in the great storm described in The Chessmen of Mars.

Harlei:  No, you idiot, the collapse hasn't yet occurred - this film is based on A Princess of Mars.

Stid:  Well anyway, you were saying that Brackett's names for Martian cities are not so good as Burroughs', and we can agree on that, by and large.

However, the actual places as she describes them are certainly good enough as settings for the scenes in her stories.

Kushat was built in the immemorial pattern of Martian cities, a sort of irregular, sprawling wheel enclosed by a wall at its outer rim and with the King City at the hub, a walled enclave of its own containing the great towered hall of the king and the houses of the nobles.  The dark turrets, some of them ruined and partly fallen, all of them stained and blackened with time, stood up grim and dreary in the cold sunlight, the faded banners whipping in the wind that blew down from the pass...  [People of the Talisman, page 37.]

In this respect it's fascinating to compare Brackett's Mars with that of Burroughs.

Whereas the cities of the Brackett Mars are crumbly, dilapidated, sinister, full of ancient evil, the red men of Barsoom have by and large a high-functioning civilization of healthy city states, except in those cases where the city-state happens to be ruled by some outrageous tyrant such as Tul Axtar of Jahar.  The Barsoomians' world is slowly dying, but that fact does not make them gloomy, nor their cities less well-maintained.

Zendexor:  True, that one is well-preserved, spic and span!  By scientific wizardry, an ancient dying race of Martians, humanoid but not human, have kept up the appearance of their former numbers, peopling their city with optical illusions.  An unforgettable tale, The Last Days of Shandakor: an unforgettable lost city, taboo for modern Martians.

But an Earthman finds it.

The Earthman is an anthropologist.  He first learns of Shandakor while in a wine-shop in Barrakesh.  It all starts when he notices a stranger whom the other Martians in the room refuse to look at.

"Why do the people shun you?"

"Only a man of Earth would need to ask," he said and made a sound of laughter, very dry and bitter.

I was thinking, A new race, an unknown race!  I was thinking of the fame that sometimes comes to men who discover a new thing, and of a Chair I might sit in at the University if I added one bright unheard-of piece of the shadowy mosaic of Martian history.  I had had my share of wine and a bit more.  That Chair looked a mile high and made of gold.

After much hardship and adventure the narrator arrives in Shandakor.  A place of wonder and a kind of inhuman superiority, and yet of final defeat and loss.

There was a fountain in the market place.  The water sprang up sparkling in the colored light and filled a wide basin of carved stone.  Men and women were drinking from it.  I went to the fountain but when I put my hands in it all I felt was a dry basic filled with dust.  I lifted my hands and let the dust trickle from them.  I could see it clearly.  But I saw the water too.  A child leaned over it and splashed it and it wetted the garments of the people.  They struck the child and he cried and there was no sound.

I went on through the gate that was forbidden to the human race.

The avenues were wide.  There were trees and flowers, wide parks and garden villas, great buildings as graceful as they were tall.  A wise proud city, ancient in culture but not decayed, as beautiful as Athens but rich and strange, with a touch of the alien in every line of it.  Can you think what it was like to walk in that city, among the silent throngs that were not human - to see the glory of it, that was not human either?

The Earthman falls under the spell of the place, to some extent, but he also gets to understand why the other Martians hated the people of Shandakor...

Stid:  A fine but sad tale, and an interesting variation on the more swashbuckling mysteries of the other Brackett Mars tales.  But now let's branch out a bit, shall we, and consider other writers?

Zendexor:  So long as we keep their works in touch with each other via a chain of comparison... 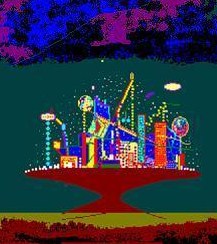 Another type of OSS city, noticeably different from those of Brackett and Burroughs, consists of the twenty-five great disk-on-stem structures which we meet in Uranian Gleams.  These were built with stolen power.  Energy plundered from another universe.  This crime - if you consider it a crime - gives a guilty start to Uranus' glorious Phosphorus Era.  Ever since then, for over a million Terran years, those Uranian cities have stood on their indestructible disk-foundations of iedleis, the "ultimate metal".

The superstructures may come and go, the cities may suffer conquest, but the disk-on-stem foundations endure, without a scratch.  So on Uranus we have cities which partake of the permanence of geographical features, while nevertheless showing surface change.

Like those of Barsoom and the Brackett Mars, the cities of Ooranye have acquired their own personalities, which we get to know in the history section and in the novellas of Uranian Gleams.  Cities such as:  Vyanth, the unconquered, scene of the liberation of the slaves; Oso, the "Mad City" of the Tin Era; Ao, the Last Great Hive; Dmara, the First City and Contahl the City of the Sun-Egg - those last two being the odd ones out, for they were never rebuilt on the disk-on-stem design...

Harlei:  Suppose, though, I want to emphasize what the three writers have in common, I could allude to what's underneath their cities.  Barsoom, and the Brackett Mars, and Gibson's Ooranye/Uranus all have cities with pitted or vaulted or tunnelled foundations.  The "pits" of Barsoomian cities, and the "vaults" of Uranian ones, find their echo in the tunnels beneath Kushat and Sinharat in Brackett's Mars adventures of Eric John Stark.

Zendexor:  Pits or vaults down below, aerial docks up above, and the main city with its mansions and palaces and poorer quarters in between: you can't go wrong if you give your readers all that.

Stid:  You've just summarised the city design for a good swashbuckling tale, but what of more advanced, "futuristic" stuff?  The Old Solar System had some fine techno-futures...

Zendexor:  I suggest you look at Frank R Paul's pictures; they're scattered all over this site.  Or this picture by Leo Morey of a city on the other side of the moon... 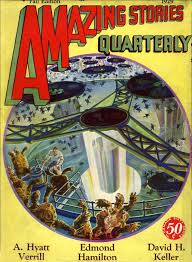 For a plant city, see the intelligent plants page.