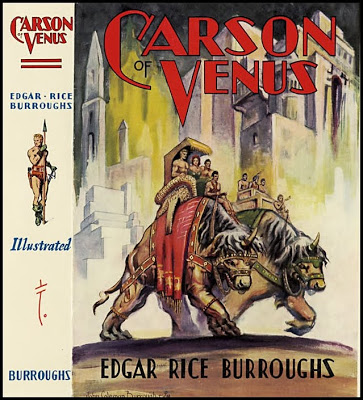 In four novels and one fifty-page novella, Edgar Rice Burroughs builds his memorable Venus, an achievement often under-rated, overshadowed by his better-known Barsoom.  Amtor is in truth a superb creation.  Indeed in certain respects, and in certain moods, a reader may actually prefer Amtor to Barsoom. Or at any rate -

Harlei:  Uh, Zendexor, you're not really going to prefer Amtor to Barsoom generally, are you?

Zendexor:  All right, I won't go that far, but let's just say, if you hired me, lawyer-fashion, to argue that there are quite a few merits possessed by the Amtor series which are lacking in the Barsoom saga, I could argue it that way. 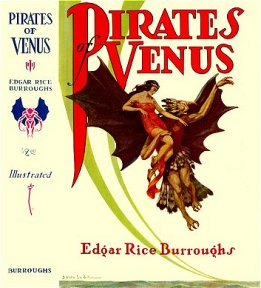 Really, it's inevitable: because Venus and Mars are so different, the saga of Amtor, if it works at all - if it is to succeed as a worthy embodiment of the mystery planet - is bound to contain elements which are not to be found on Barsoom, and those unique Venusian elements will bring with them their own particular literary virtues...  That's part of the case, anyway.

Stid:  And the rest?  I can guess.  Some risks, and/or mistakes, and/or failures, in the Barsoom series, are avoided, or better handled, in the Amtor series.  Let's admit it, shall we?  To start with - the way the feller gets there...

the chance in a million

Zendexor:  Yes, though, mind you, the mistake which deviates Carson Napier's rocket is ridiculous: as absurd, in its own way, as John Carter's instantaneous transport to Mars.  But because Napier does travel in a rocket, Pirates of Venus gives the reader a proper journey, whereas A Princess of Mars does not.  And Burroughs knows how to narrate a journey!  Right up to his parachute-descent through the atmosphere of a planet which he does not believe will support life:

...As I entered the second cloud bank, there was a very noticeable rise in temperature the farther I fell.  I shut off the oxygen supply and tried breathing through my nose.  By inhaling deeply I discovered that I could take in sufficient oxygen to support life, and an astronomical theory was shattered.  Hope flared within me like a beacon on a fog-lit landing-field...

The suspense, the despair, followed by the fantastic hope, remind me of the excellent start to the Pellucidar series.  So we won't mock the fact that he lands on "the wrong planet" - that he intended to reach Mars and hits Venus instead.

Stid:  Very well, I shall refrain, though my lip is trembling a trifle.  Surely we're talking about an all-time record in comic navigation here...

Harlei:  It's just ERB's way of getting his hero to Venus, you chump!  No point in carping.  And talking of heroes, Zendexor, I can think of another plus point for the Amtor series -

- And that is: when you're weary of the punctilious, arrogant, ruthless John Carter, you can choose instead to follow the fortunes of the more easy-going Carson Napier. 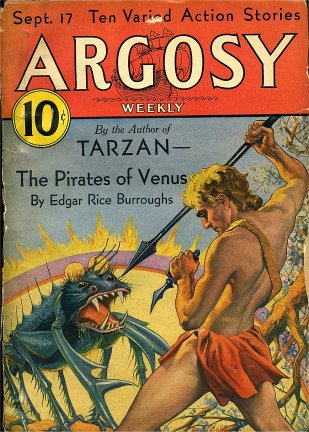 Zendexor:  I accept that, provided it's understood that we're not disparaging Carter as a creation: both men are well-drawn.  And it is to Burroughs' credit that they are so distinct one from another.  It goes to show that two tall handsome muscular heroes need not be interchangeably alike.  Neither of them are "cardboard characters".

Oddly, both men have a paranormal ability: Carter can project himself across space at will (at least, by the end of the series he can sometimes do it at will, though apparently not when imprisoned on Jupiter), and Napier can project images of himself.  And in both cases the abilities are used inconsistently.  That's to say, the author forgets about them except on rare occasions when he feels like using them for short-cuts in the plot.

Zendexor:  Quite - but as I have pointed out elsewhere, Burroughs is a good enough story-teller, that his world achieves a kind of critical mass of excuse-demand, which enlists the reader's co-operation in explaining away inconsistencies.

Zendexor:  Any way you like!  There could be as many excuses as there are readers.  You see, you have to excuse him, or risk forfeiting the reward - the reward which you, as a reader, obtain in return for accepting Burroughs on his own terms: namely, the wonderful worlds he provides. 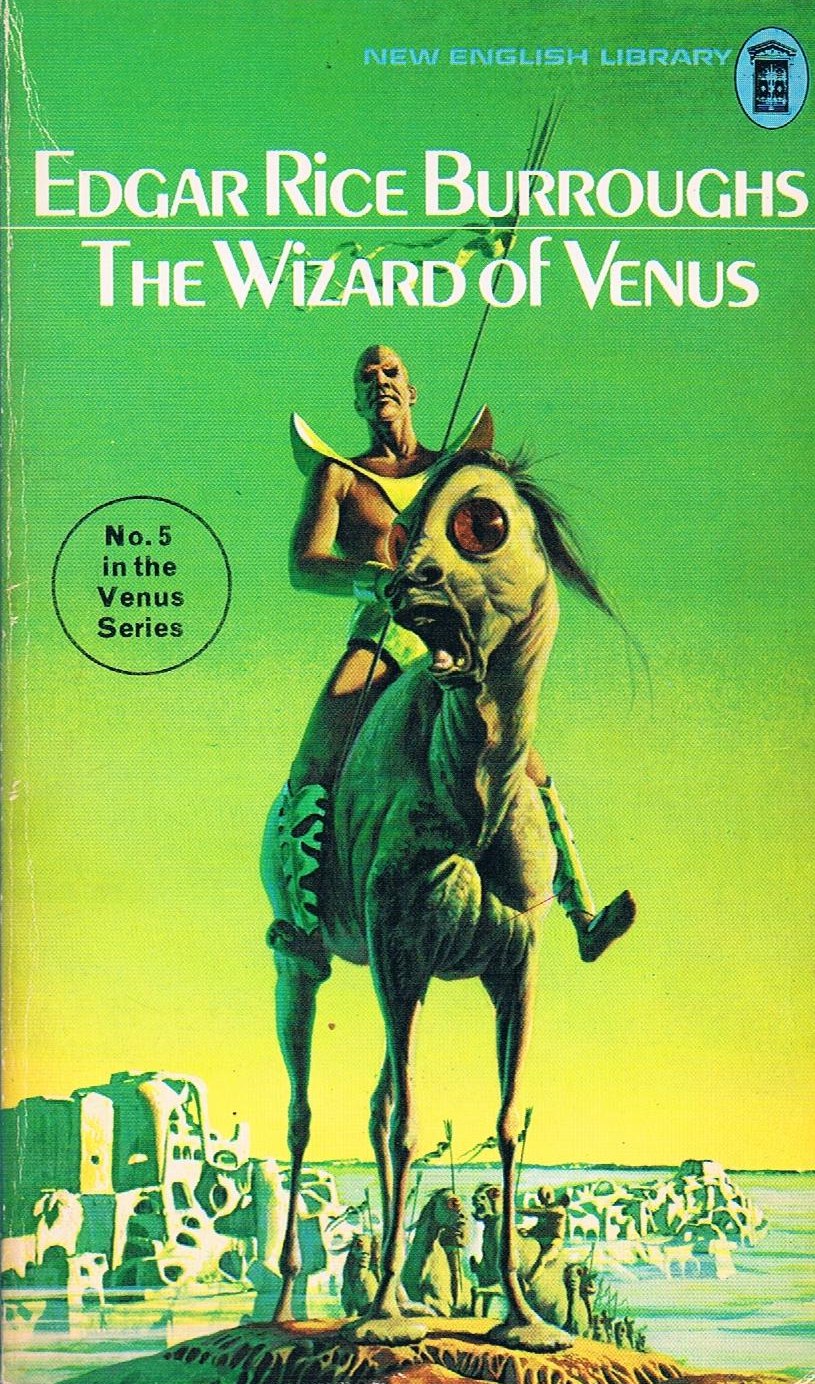 Burroughs' Venus dazzles with its sheer invention.  Whereas the red men of Barsoom have somewhat of a global culture, Amtor has none; instead, we repeatedly encounter the utterly unexpected.

This is partly because geography has made no headway among the Amtorians, whose maps are worse than useless.  The medieval theologian's definition of God - as a circle whose centre is everywhere and whose circumference is nowhere - can aptly be applied to the inside-out cartography of Burroughs' Venus.  We therefore rove across the cloud-wreathed planet with a constant sense of unknown lands surrounding whatever country one happens to be in.

The mighty tree-city of Kooaad; the amazing cheek-by-jowl juxtaposition of dark Kormor, City of the Dead, with its brightly scientific neighbour, the rationalist Havatoo; the fish-like Myposans; the man-shaped amoebas of Voo-ad; the empire of Korva and its fascistic Zanis; the land-dreadnoughts of the Falsan-Pangan war...

In the words of Carson Napier:

...Venus is a world of contradictions, anomalies, and paradoxes.  In the midst of scenes of peace and beauty, one meets the most fearsome beasts; among a friendly, cultured people exist senseless and barbarous customs; in a city peopled by men and women of super-intelligence and sweetness the quality of mercy is utterly unknown to its tribunals.  What hope had I, then, of finding a safe retreat for Duare and myself?

a heroine who is more than a counter 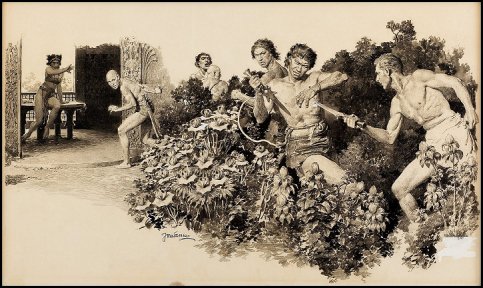 Zendexor:  In other words, Duare has to be rescued from herself, to some degree.  It may have started as a "plot device", as you call it, Stid.  But the bonus turns out to be, that we get a heroine with a fair amount of personality.  Dejah Thoris has no personality at all; she just exists to be fought over.  Duare, by contrast, seems real. 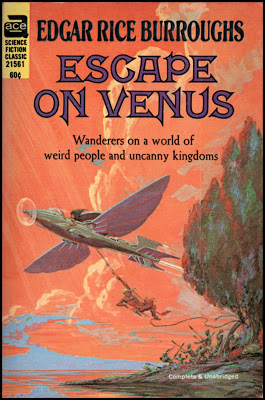 In addition to all the diverse cultures and civilizations, we wander the wildernesses in between - the ever-expanding chances to get lost in the hugeness of a world largely unknown even to its own inhabitants...  What a recipe for adventure, especially when Carson and Duare flee in their anotar, or "bird-ship", the only aircraft on Venus:

As the long day wore away, nothing but illimitable ocean stretched monotonously before us...

As night fell, the vast Amtorian scene was bathed in the soft, mysterious, nocturnal light that beneficient Nature has vouchsafed a moonless planet.  Seemingly as limitless as interstellar space, the endless sea rolled to the other rim of our universe, glowing wanly.  No land, no ship, no living thing impinged upon the awful serenity of the scene - only our silent plane and we two infinitesimal atoms wandering aimlessly through space.  Duare moved a little closer to me.  Companionship was good in this infinite loneliness... 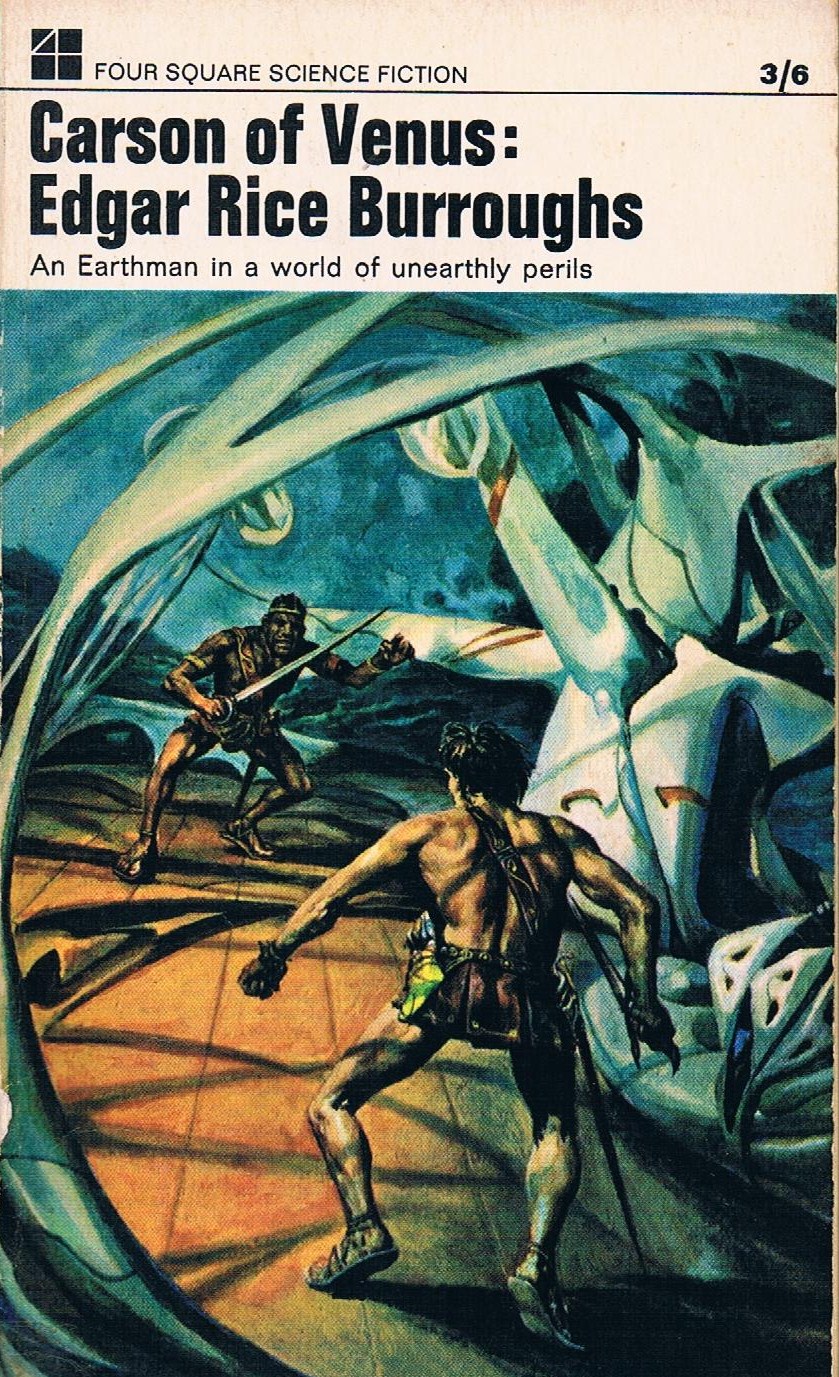 Clean emptiness - to be contrasted soon with civilized and not-so-civilized crowds.

Carson and Duare find a city, Sanara, where they are well received and can hope to make their home.

But Sanara is the one free city remaining in the Empire of Korva.  The rest of that land is under the rule of the Zanis... and Carson goes on a dangerous spying mission into the midst of that evil, the Korvan capital, Amlot, where he applies to join the Zani Guard.  He is told what to do:

"...You must hate everything we Zanis hate and applaud everything we applaud, and under no circumstances must you ever even look critical of anything that is Zani.  To demonstrate what I mean: we were listening to a speech by Our Beloved Mephis one evening, when a bright blue light shining in his eyes unexpectedly caused one of my fellow officers to knit his brows and half close his eyes in what appeared to be a frown of disapproval.  He was taken out and shot."

Harlei:  And so, what with all this variety that you've talked about, Zendexor, how would you class Amtor among the types of Venus in literature?  To me, it doesn't quite fit the types you've listed on the main Venus page - the fecund swampy jungle Venus, the ocean Venus, the desert Venus... 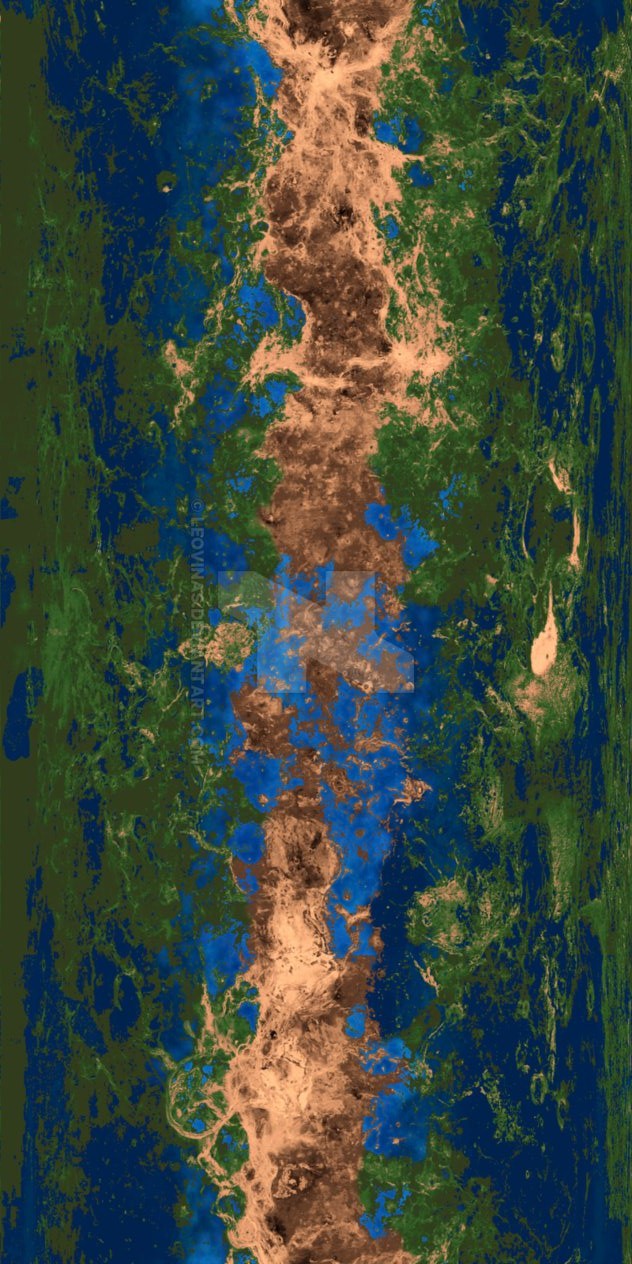 Zendexor:  You're right - it doesn't fit any of these.  Much ocean exists, but also much land.  Forests exist - great ones - but they don't seem to pullulate with that dramatically excessive fecundity we're accustomed to from reading Clark Ashton Smith, nor are they soggy with that perpetual rain we get from Bradbury's version.  And I don't recall any deserts on Amtor, though the place is generally warm.

Perhaps we could invent a category, or a label, for Burroughs' Venus.  How about: "The ramshackle Venus"?

The term is used in a complimentary sense, to denote the sense of loose infinity, the infinite variety, the continual, somewhat dreamy latency of possibility of a world whose inhabitants don't themselves know the geography...

Harlei:  Let's go for that term then.  The Ramshackle Venus.  A fitting class in which to place the cloud-wrapped, mystery planet.  Burroughs did a good job.  I think in fact that the ramshackle Venus is the only type one could bear to read about, in a series that is four books long.  Four books of rotting smelly jungle, or ocean billows, or torrid sands, would be too much.  But four books of colourful variety, in which the reader never can guess what's beyond the next misty horizon - well, that's a recipe for fascination and awe.

For comparison between Amtor and Barsoom see The Worlds of Edgar Rice Burroughs.

For more on Carson Napier's arrival on Venus, see the OSS Diary for 22nd December 2016.

For the unknown Amtorian continent of Vodaro, see the OSS Diary, 16th March 2017.

For the episodic unpredictability of Amtor see Multi-Pocket Worlds.

Extract:  Living off the land on Venus.