the worlds of edgar rice burroughs
by
antolin gibson 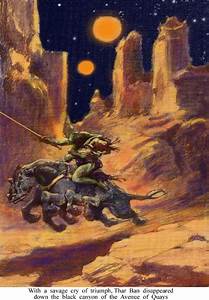 [This item from my brother's vast portfolio of meditations explores one avenue in which a multiple world-builder's creativity harmlessly channels his dark side.  As one who aspires to belong in this category I therefore wonder: when I chose to devote myself quietly to literature, did the outside world have a lucky escape? - Z.]

I have a quaint theory, which would probably fall apart if one were to go into it to any great depth, that creators of multiple worlds are brooding uneasy egotists who, if they had not been writers of science fiction or fantasy, might quite possibly have become fascist dictators – whereas the creators of just one, particular, and myopically crafted world are the shy escapists who are much happier hiding away in their own creation than coping with life on Planet Earth.  As is the case with many happy-go-lucky theories of this brisk, sweeping kind, there may be just a particle of truth to it.  In the first 'polymorphic' category we have writers such as Jack Vance, Clark Ashton Smith, and Edgar Rice Burroughs.  In the second 'particularist' category we have writers such as J.R.R.Tolkein, E.R.Edison, and Mervyn Peake.

While I leave you temporarily stunned with the profundity – or superficiality – of this theory, I hasten on to discuss one of the 'polymorphics' – Edgar Rice Burroughs.  His Mars, his Venus, his Moon, and indeed his Earth (in which are the worlds of Tarzan and Pellucidar) are wonderful creations, especially of course Mars (Barsoom), the most famous of them, a world one can inhabit with a constant sense of wonder as well as the realistically gritty sense of actually being there.  But I'd like to start with Venus (Amtor) because, for one thing, it is my personal favourite among this author's worlds, and for another thing, this little piece of mine about Burroughs is not so much an evaluation of a world-creator's accomplishments, as of his motives – these crazy 'polymorphics'!  Why on Earth – or out of Earth – do they do it?  And I think this question of motive is the most important consideration when looking at this group of writers.  The most 'polymorphic' creator of all – Olaf Stapledon – at the end of his Starmaker - presents a kind of cosmic emblem of all the multiple creators – that of the creator kicking worlds into oblivion as though they were so many footballs.  But in the meantime he has had his will with his worlds: they have been for something, to express something, to enact the bee in the bonnet, or the depth of a revelation.  The creator is supreme experimenter.

This is the penchant of Burroughs: he does not lovingly layer the textured strata of his myths like a Tolkein or a Peake and, as it were, reclusively observe the cobwebs gather – but rather with a great, and swashbuckling, briskness he tries ideas out for effects, special effects, that will grab hold of the reader.  The result being more a kaleidoscope than a barrel of maturing wine.  Take, for instance, Amtor – in many ways the most satisfying world of Burroughs from an intellectual point of view.  The macho redundancies that sometimes apply to Barsoom, and to the world of Tarzan, are muted on Venus, and a genuinely amusing satire creeps in (one can never forget “Maltu Mephis!” in Carson of Venus!) plus a tendency towards something almost cute in the fabric of the world – for instance, 'zorats are ridden without bridles, being guided and controlled by pulling upon their long, pendulous ears.'  Experiment, experiment.

In contrast, Barsoom is a solemn world, and there is a haunting quality not found upon Amtor or anywhere else in Burroughs's works:

We moved as silently as our hard, sharp shadows which dogged our footsteps toward the east.  Gay plumed voiceless birds watched us from the branches of skeel and sorapus trees, as silent as the beautiful insects which hovered around the gorgeous blooms of the pimalia and gloresta which grew in profusion in every depression of the hills that held Barsoom's scant moistures longest.  Mars is a world of vast silences where even voiced creatures are muted as though by the consciousness of impending death, for Mars is a dying world.

And all the haunting devil-may-care of Barsoom comes from this motif, this noblest – and at times tryingest – fatalism that is such a feature of Mars – and this wonderfully realised Barsoom is the perfect canvas for Burroughs to express – and experiment with – such an idea of fatalism working through all the various aspects of the world.  Now I wonder, is it ever justifiable to dilate on certain parts of fiction purely in order to bring forth a significance and emphasis out of proportion to the literary quality, and a significance that might not even have been spotted by the author?  I'll try such 'dilation' on Synthetic Men of Mars, not in my opinion one of the author's best yarns, which includes the supreme embodiment of the Experimenter in the shape of Ras Thavas, the Mastermind of Mars and Toonolian nobleman, who creates sentient – and tormented - life from a continually growing culture of tissue.  The results of his experiments are called 'hormads', created solely to be fighting men (of course, what else?):  But, if they were too malformed, then -

At last fifty percentum of them had to be thus destroyed – fearful caricatures of life that were neither beast nor man.  One was only a great mass of living flesh with an eye somewhere and a single hand.  Another had developed with its arms and legs transposed, so that when it walked it was upside down with its head between its legs.  The features of many were grotesquely misplaced.  Noses, ears, eyes, mouths might be scattered indiscriminately anywhere over the surfaces of torso or limbs.  These were all destroyed; only those were preserved which had two arms and legs and the facial features of which were somewhere upon the head.  The nose might be under an ear and the mouth above the eyes, but if they could function appearance was of no importance.

Is it just me – or can a certain dubious relish be detected here, such as sometimes can be found in the works of Jack Vance, another of the great 'polymorphic' class of world-builders?  But – and this is the point of my above dilation – the scene is like looking down a bottomless pit and all these living beings – which are recycled into the vats – all this life churned and twisted and dissolved and reformed – transcends the novel and its rather trite tone and implausible swashbuckling story-line.  This transcending vision, pulling our emotions through implication after implication – to perhaps the ultimate dystopia, with its shadows of mockery and unceasing cruelty and accompanying rationale – is myth-making at its most extraordinary, and quite beyond a literary sense or seemliness or artistry - it is pure idea – it is myth.

Before we travel to the moon, and the third of Burroughs's great experiments, a final word on Barsoom – concerning the surprisingly un-mythical semblance of John Carter, surely one of the greatest bores in heroic literature – although his idiotic son trumps him.  Surprisingly unmythical, that is, because Burroughs is the master of the Pivotal Character, one of the most pivotal and mythically resonant characters of all being Tarzan.  Like Robert E.Howard's Conan, Tarzan is a hero who in a sense by his presence makes the world he inhabits, as the central motive force of that world: the beauty of such pivotally structured adventure-writing is the unique quality that the mythic world takes on with such a hero at its centre.  Take for instance Tarzan's Africa, a malleable entity, entirely at the beck and call of Tarzan's code and vision (excuse this brief excursion into Earth, but, after all, Earth is a member of our Solar System!) -

The voice resonates.  This instalment, from Tarzan and the Lost Empire - perhaps, incidentally, most akin to Rider Haggard than any of the other tales in the series - demonstrates the fact that, within the story, Tarzan is a being out of scale to the world he moves in, the adventure which challenges him.  Tarzan in a sense takes over from the author – he is a creation of such mythic power that he only has to appear in a story to kindle into being an unconstrained amplitude within it, the significance of which one might almost say is out of the author's own control.

But the question is: did Burroughs intend such a mythic presence in the shape of John Carter of Barsoom?  I think he did, somewhat forlornly: and I think he failed for an interesting reason.  Earth, after all, was already created – someone managed it before Burroughs could get his hand in - and therefore all Burroughs's creative power could naturally flow into the pivotal character of Tarzan.  But Barsoom – Burroughs did it all! - and he was captivated by his role as supreme creator of the world.  Hence the one-dimensional John Carter.  Burroughs's interest (and ideological commitment?) to this Fighting Man was not deep enough to take from his obsession towards the environment he was creating.  To return to my earlier distinction - if Burroughs had been a 'particularist' rather than a 'polymorphic' world-creator, then we might have had an Aragorn rather than a John Carter!  Hmmm . . . improvement?

And now let us voyage to the moon – to Vanah, that is, the moon's interior world.  This is one of Burroughs's most superbly realised creations – and one of the most thoughtful.  I think it is as near the 'particularist' as he ever came and, if he had chosen to stick with it, cobwebs might indeed have gathered around the maturing layers.  There is less of the experimenter, fewer effects, and more care with the characters, such as Orthis and the man of action, Julian, tinged with a subtle melancholy.  He has none of the irritating elements of Carter, although he is just as much a Fighting Man.  He has far more personality than Carson of Venus, but is not a superhuman in the Tarzan mould.

In case my earlier 'dilation' upon the experimenter Raz Thavas (and the experimenter Burroughs) may have sounded a little arbitrary from the literary as opposed to the mythic point of view, it might be revealing to compare Barsoom's surreal vats of creation with the grandeur of the destruction of Laythe, Vanah's exceedingly vivid city and beacon of civilization.  This is because the sheer gusto corresponds - the relish and the outrageousness – but, as the people of the city hurl themselves into the abyss of the crater of Laythe to escape the invading Kalkars, the question of motive comes in: and in this case rather than Burroughs letting out the surreal sadism suitable to the peculiar canvas of Barsoom, he expresses within his moon a vast and noble pity, which is entirely suitable to that beautiful, struggling, and very serious world.

And so the creator, the world-experimenter, the polymorphic loony, kicks another world into touch: its unique environment and history has expressed something of himself.  The satire of Venus, the surrealism of Mars, the nobility of Lunar Laythe.  Each served their turn – each a wonder to which I - some day - must return.