the darkside of mercury 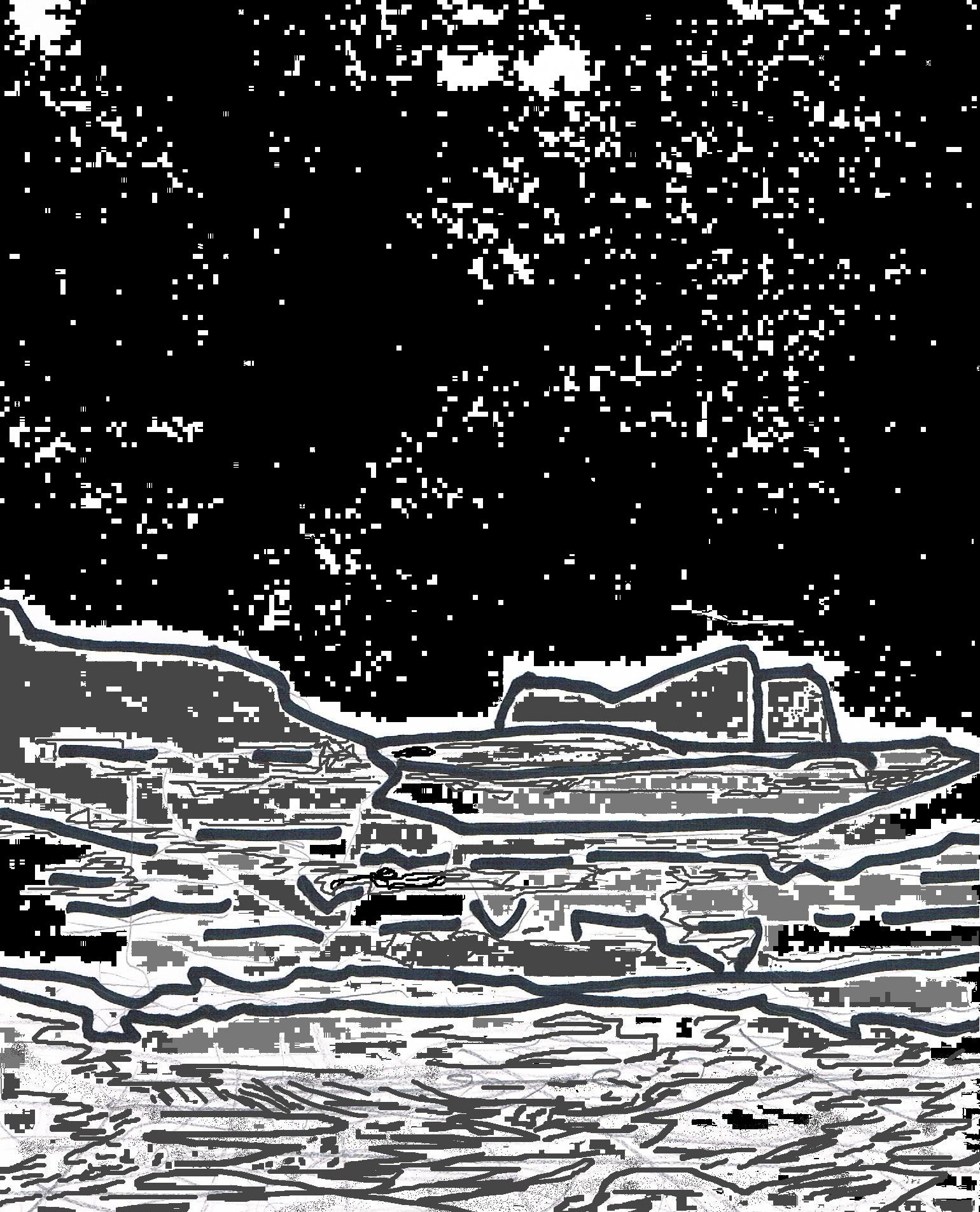 Belief in the sun-synchronous rotation of Mercury (scientifically credible until 1965) furnished us with three fixed and everlasting zones, to enrich our mental picture of the innermost planet: namely, the Twilight Belt, the Dayside (or Hotside), and the Darkside.  Of these three, the least explored, in the literature of the Old Solar System, is Darkside.  Yet, there have been some forays into that cold and sinister realm.

Stid:  Before you go on, here's a reason why Darkside has been relatively neglected.  Logically, it can't contribute as much -

Harlei:  Don't listen to him, Zendexor: he's going to suggest that Darkside is just like any old rocky dark place, such as you could find among the asteroids and the outer planet moons.

Stid:  Well, what's wrong with pointing that Darkside is just rock and dark, whereas the Sun-baked Hotside is special, and likewise the Twilight Belt?   Sunside is special because it's the uniquely hottest place we can ever explore.  That's what gives Brightside Crossing its power.  The Twilight Belt is special because that's where you can narrowly tread between extremes of fire and freeze, of dazzle and darkness, of furnace and ice.  That's what gives Valeddom and The Immortals of Mercury and Shannach - The Last their power.  But as Harlei said, Darkside is just cold and dark, and you can find that in lots of places.

- but dark isn't just any old dark when it's Mercury...  There you have a darkness of a particularly edgy sort...  I don't know how to pin it down.  You explain it, Zendexor.

nearly there - just a bit more to the left

Zendexor:  I think, Harlei, that you yourself have just used the best word - "edgy".  Big contrasts creep up to their mutual borderline and strike sparks off each other:

First, awareness of context makes us "colour" the dark of Darkside.  By that I mean, we mix our idea of it with the pressure of the very different scene hidden round the curve of the planet - the savage beat of the Sun's radiation.  It's a contrast we can't forget, when the topic is Mercury, because of what we know.  Frozen dark with raging brightness lurking behind it!  Planetological dramatic irony.

And precisely because we can't see the close-but-hidden fire, the situation demonstrates, in the blink of an eye, the power of Space to edge up on us, to blank out the Sun whenever the least chance occurs.  With the Sun screened off, with our reception of its light and heat snuffed out by that relatively tiny planetary bulk, suddenly the imagination see-saws, and what's gone is gone, and might just as well be at the other end of the Universe....

The mind gulps at these extremes...

But it's true, as Stid said, that literature hasn't tipped us particularly often over that strange edge.  Darkside-for-its-own-sake is rare in OSS fiction.

Let's first consider the Mercury novels, Battle on Mercury and Valeddom.  The first is set mainly on Hotside, the second mainly in the Twilight Belt.  But they each include minor forays into Darkside. 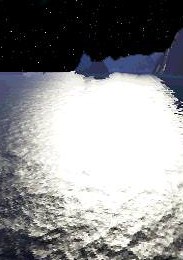 ...There was something white under the treads, and Dick looked down in surprise.  He guessed what it was - frosty crystals that must be the first bit of ice or frozen air.  But there was no time to waste on that.  They had to get further in, where the chances of finding oxygen frozen solid for their use would be improved.

Driving was getting harder, and Charlie came up to relive him.  The old man set a straight course, and followed it with only a few slight variations.  The ground seemed to be smoother here than in the hotlands.

Dick had time to study this queer half of the world now, but there was very little to see.  As they went further in, the crust of white deepened and became solid, like the ice Dick had seen before only in the refrigerating units.  He'd read about it, but it still seemed strange to think of ice that was measured in feet of thickness and spread over half the world.

Prosaic, physical stuff, just rock and frozen air, which you might find anywhere in the outer solar system.  Ammunition for Stid's argument!

Nevertheless in my view the perpetual context of closeness to Hotside makes Lester del Rey's account of Darkside more interesting than it would otherwise be.  To that extent, I'm with Harlei.

When we come to consider that other and more fantastic Mercury novel, Valeddom, we have an episode much more packed with emotion.  Valedom's "capian plain" is fraught with spiritual significance.  It's a symbol, if you like, of our wish to make dreams come true: in this case, the longing that we might enter, for real, into a landscape previously known only as a picture.

Harlei:  Still, it's only a short passage.  Isn't it time we focused on stories which are more concentratedly to do with Darkside?  Like - the one with the word actually in the title -

Zendexor:  Let's go for it, then.  The Demons of Darkside is a rollicking example of Brackett's early work.  What she sometimes lacks in clarity, she makes up for in exuberance - 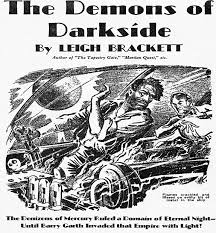 Stid:  Hey, watch it, Zendexor, you're sniping at Harlei's heroine.

Zendexor:  No I'm not sniping, I simply recognize her occasional faults.  Strikingly different, they are, from the occasional faults of her husband, Edmond Hamilton.  May I digress here?  Hamilton, in his whole life, never wrote an unclear sentence or an obscure passage.  In his early years he was often boringly verbose, but even at his most long-winded he was never unclear.  Brackett, on the other hand, was never verbose, but she was sometimes unclear.

I became confused while reading the middle section of The Demons of Darkside.  The tale has a hero, Barry Garth, and a villain, Wisley Stevens, and I know where I stand with those, but then in barges a character called Brent, without introduction, and Garth seems insufficiently surprised at him. So then I wonder, duh, am I supposed to know who this is?  Anyway, never mind...

Zendexor:  It's just a bit disconcerting for me, since Brackett is one of my favourite authors, and so I humbly begin to wonder whether it was my concentration that was at fault... but even if it was, I can't help feeling that a story ought to be absorbable more smoothly even by a dithery brain like mine.

Harlei:  But isn't it just mystery, the sort you often need in a tale?

Zendexor:  Mystery, yes - confusion, no!  However -

Harlei:  However, let's get on to the Darkside bit!

Zendexor:  Right, let's, because the climax is the good bit.  Here my previous criticism no longer applies.

Stid:  The "Demons" don't disappoint, then.

Zendexor:  Far from it.  Mind you, the word "Demons" turns out to apply in a difference sense from what the characters expect.  But that's acceptable mystery.  That enhances the tale.  When you consider the setting, native life on Darkside is bound to be strange if it exists at all. 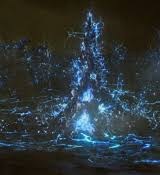 Garth had never been so alone, even in prison, or out in space with his racing ship.  The cold glare of his torch, thrown out the open port, showed him only an endless maze of crystal spires, glimmering eerily in the light.  There was a naked loneliness about those tumbled crystal peaks, held forever in the unchanging vacuum and the unimaginable dark.

Garth felt the desolation seeping into him, flowing like water through his bones.  The darkness pressed down, a solid thing beyond the narrow shaft of his torch.  It was smothering, overpowering.  The black of utter blindness, untouched by sunlight since the Universe began...

And this isn't just purple prose; the loneliness is specially relevant because it exists not just in the human minds...  Garth begins to hear voices, and the voices speak an astonishing truth, of a life without soft organs, a life that came into being with the planet itself...

Zendexor:  The Demons of Darkside is not in the same league with Brackett's Mercurian masterpiece, Shannach - The Last.  But the climax of Demons does bear some comparison with the greater tale.  This is because the "Demons", like Shannach, are not only perilous but also pitiable.

"...It's very lonely here in the eternal dark, the eternal silence, the eternal thought.  We might have helped you.  Instead, we have - is killed the word - killed you..."

You can almost hear the eerie voices as you read the story.

And here may I say that Brackett's crystalline Darksiders raise the same profound question as does Weinbaum in The Lotus Eaters with his uselessly intelligent Venusian plants.  The question is: are we right to assume, as we usually do, that beings must be adapted to their environment?

On the contrary, shouldn't we rather assume that intelligent beings are likely to be discontented with their environment?

Consider our own species.  If we were really adapted by nature to our environment, would we need the word "environmentalism" in our language?

Stid:  I suppose, once you get culture and civilization, they generate pressures of their own... whereas Weinbaum's Venusian truffles and Brackett's Darkside crystals don't have any distractions apart from their own thoughts.  So it's less easy to see why they should have thoughts at all.

Zendexor:  Yes, it's an outrageous idea, but all the more compelling if you can accept it.  The stories don't tackle the issue, they just present it...  and maybe that's understandable in a short story...

...It must be hard, maybe impossible, when constructing a tale, to explore eeriness and invent a culture at the same time.  Your story can hardly have both.  It's stretched out on a frontier of feeling, a sense of dark alienage, and that rather precludes the allure of exotic civilizations.

Darkside, for instance, is hardly the sort of place to build a city.

Stid:  In that case we'll have to keep Darkside fans like Harlei happy in other ways.  Focus on blobs of helium...  get romance out of them, if you can. 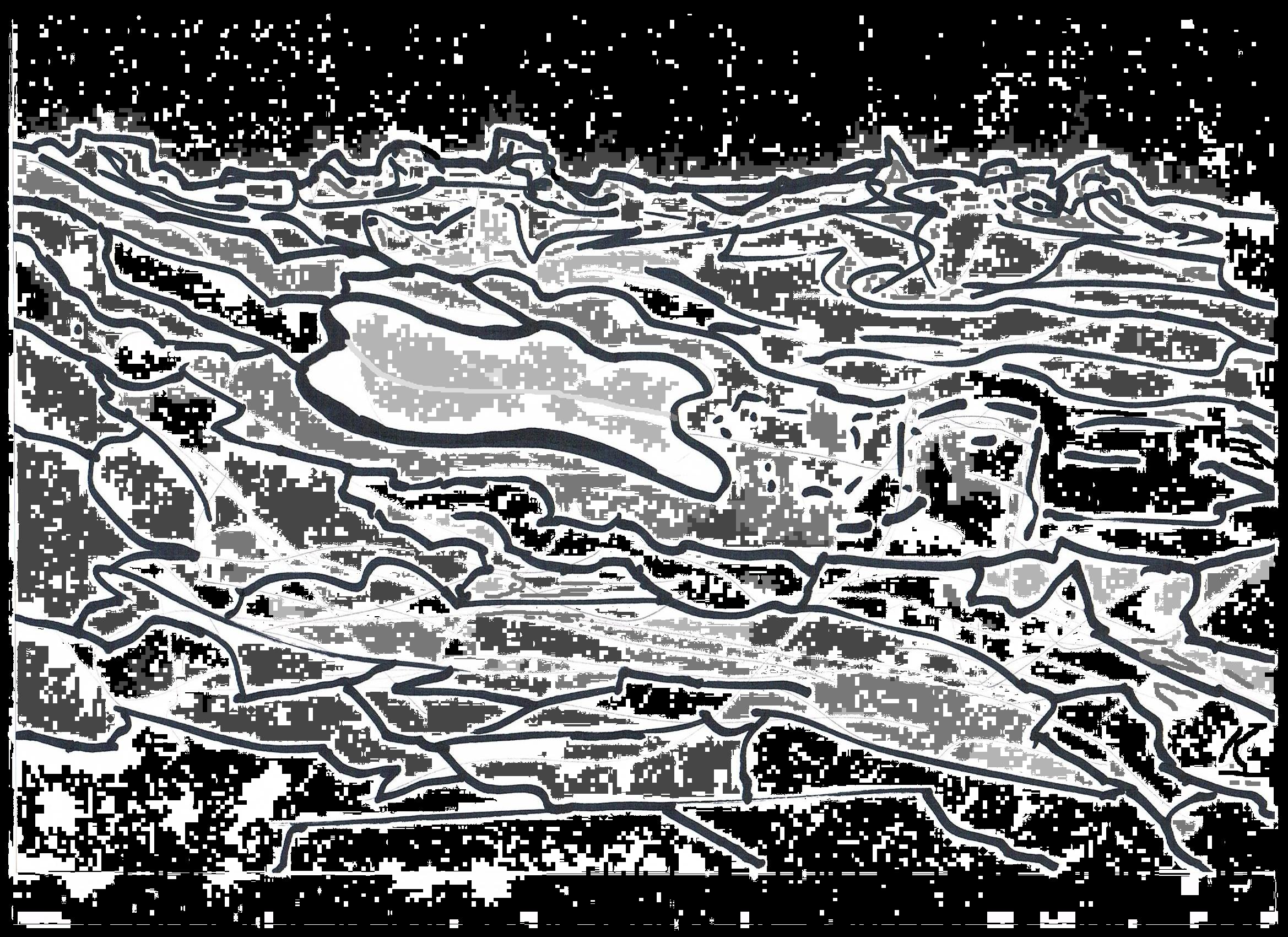 attempted illustration by Zendexor of the Mercurian liquid helium blob

Zendexor:  Don't knock blobs of helium; who are you to look down your cultured nose at cryogenic life-forms?  I'm now thinking of a hard-sf author's first published story - The Coldest Place.

Stid:  Which he later referred to as "not that good".

Zendexor:  That was his own verdict on this youthful effort; but I beg to differ.

...I got up and turned the headlamp on high.  The light spread for a mile around; a white fairy landscape sprang to life, a winter wonderland doubled in spades.  I did a slow pirouette, looking, looking... and saw it.

Even this close it looked like a shadow.  It also looked like a very flat, monstrously large amoeba, or like a pool of oil running across the ice.  Uphill it ran, flowing slowly and painfully up the side of a nitrogen mountain, trying desperately to escape the searing light of my lamp...

Harlei:  A helium blob in distress.  If that's not romance, I don't know what is.

Zendexor:  Stid is speechless - but seriously this is the romance of the utter unknown.

The blob only has to appear, briefly, in a very short tale, for us to think about it for a long time afterwards.

Stid:  Like Wordsworth's "Solitary Reaper",
The music in my heart I bore
Long after it was heard no more.

Zendexor:  Precisely, although the details differ: in the one case we hear a Highland lass singing a haunting song, in the other we have the retreating glimpse of a solitary helium blob with its un-guessable mode of being.  Big stuff, either way.

For a tale with a Darkside climax see Violet Bertelsen's Zookie Must Die.