what to see on
callisto 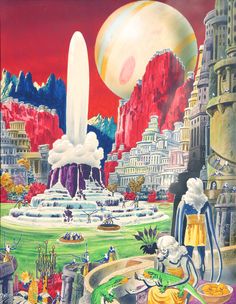 ...I wheeled in dismay and remained petrified at the sight before my eyes.

The surface of the lake was broken into boiling foam, and from it there reared the fore-parts of what appeared to be giant caterpillars.  They squirmed out upon land, dirty-gray bodies dripping slime and water.  They were some four feet long, about one foot in thickness, and their method of locomotion was the slowest of oxygen-conserving crawls.  Except for one stalky growth upon their forward end, the tip of which glowed a faint red, they were absolutely featureless.

Even as I watched, their numbers increased, until the shore became one heaving mass of sickly gray flesh..

...My first reaction to the arthropods was, as I have said, one of revulsion at what I deemed their hideous and inhuman aspect.  Inhuman they certainly were, but "hideous" is a matter of open question.  The fact that they differed enormously from Homo sapiens was no reason to find their appearance automatically loathsome.  Very soon I found myself admiring them.  Slim, stalking figures, they were not without a certain grace - even a certain cold inhuman beauty.  With their attenuated limbs and extreme height they came, with familiarity, to assume something of the dignity and impressiveness of the lean gaunt statues of Giacometti or Henry Moore's weird stone figures.

Indeed, they had also something of the sleek, economical efficiency of a well-designed machine.  Almost I could picture those stalking, multijointed limbs as smoothly machined pistons.  Something of the passionless beauty of the machine was theirs, and something of the grandeur of sculpture.

In short, I no longer found them frightening, having no reason to fear my fate at their hands...

and see Thanator - For and Against

It had almost no atmosphere, just a thin layer of the heavier gases.  It was a belted world, without clearly defined continents or surface markings.  Its equatorial zone was one vast, featureless belt of darkish-gray.  Its temperate zones were white, with patches of yellow here and there.  But its poles were gray again.

"The satellite's like a huge ball of thin mud that's never hardened," said Burl as they studied the strange terrain.

"The equator's the softest - it seems to be a river of muddy water, hundreds of miles wide - only it can't be water.  Probably semisolidified gases holding dust and grains of matter in suspension," said Russ.  "The temperate zones are the same stuff, only colder, and therefore more stable.  A thin crust of frozen gases over a planet-wide ocean of semiliquid substance."

"The Sun-tap station's on the southern pole," said Burl.  "That must be solid."

It was.  The poles... were actually two continent-sized islands of shell.  Dry, mudlike stuff, hard as rock, floating on the endless seas of the semiliquid planet...

Donald A Wollheim, The Secret of the Ninth Planet (1959)

"Lad, it's time we left," rasped Simon Wright's warning.  "The crystals are coming too near."

Curt whirled.  The cataract of brilliant crystals was now pouring steadily across the rocky plains toward them.  The gleaming, faceted crystalline things advanced inexorably, motivated by an electric force in their strange organic bodies that gave them the power of attraction and repulsion to each other.

With a clicking, murmuring, rustling sound, the brilliant flood moved at the rate of a few feet a moment, each separate gleaming crystal jerking a few inches forward by exerting repulsion upon those behind it.  They were but a hundred feet away.

"Grag, wreck the cyclotrons of this ship!" Captain Future ordered.  "Then we'll be off."

As the big robot sprang into the black craft to obey, Orris and Skeel voiced wild protest.

"You're not going to leave us here to be killed by those things!" they cried.

Curt bent over the two helpless men and touched their nerve-centres, lifting the paralysis that held them.  As they staggered up, Grag came out of the ship.

"It is wrecked, master," boomed the robot.  "That ship will not fly space again."

"You two men can run now, and you can easily keep away from the crystals here," Curt told Orris and Skeel.  "I'll notify the Planet Police at Jovopolis and they'll send a ship out to pick you up."

"If I did what I'd like to, I'd let the crystals have you!  You've helped to spread a horror that's blacker than murder!"

The two criminals stared wildly at the clicking, advancing flood of crystals now only fifty feet away, and then broke into a crazy run in the opposite direction, stumbling frantically away across the drab gray desert.

flying over an ocean on callisto

It was with keen interest that the occupants of the "Meteor" examined the chart which Thard spread before them. From it they saw that Callisto was mostly covered by water and that, with the exception of a few small islands, there were but two continents. These were Dassan and Anurdi, and Thard pointed out that Viljon, which they were just leaving, was close to the seacost.

So it was that they soon headed over the great sea of Pasara, as it was designated by Thard, with the fleet stringing along behind its tiny flagship. The journey was one of about three thousand miles, as nearly as Ray could estimate from the supposed diameter of Callisto, so he set the speed at five hundred miles an hour in order to reach their destination in six hours.

The ocean, strangely, showed a muddy red-brown, instead of the deep greenish-blue of the oceans on earth. Of course the weather was extremely cloudy and that had some effect on the apparent color of the water, but he and Gary decided that it was mainly due to a high concentration of certain minerals in solution or in suspension, possibly iron oxides. The surface was troubled and choppy, though there was very little wind, but Thard did not seem to be concerned about the weather so the Tellurians presumed that conditions were more or less normal for the world they were visiting.

Ray made some tests of the outside atmosphere and found that it was of nearly same density and composition as that of the earth. However he found some peculiarities in the gravity of Callisto which could only be accounted for on the assumption that there was a gravity force separate and distinct from that due to the mass of the body alone. The altimeter depended on normal earth gravity and, while the surface gravity of Thares appeared to be about the same as that of Tora, its indications became widely erroneous when at any considerable altitude. The force did not vary inversely as the square of the distance from the body, but at a much higher rate, thus confirming Ray's previous supposition, that there was a supplementary force which accounted for the high surface gravity of so small a body and its retention of so considerable an atmosphere. Thus they learned later was due to an extremely high percentage of magnetic ores in the interior of the body; the peculiar properties of whose magnetic fields were quite similar to the artificial gravity set up by the G-rays.

When they approached the shores of Dassan the skies were clearing, and soon the sun shone forth weakly, as if it were some infinitely remote body, that seemed scarcely akin to the sun that shone on Earth. But the temperature of the air was nearly eighty degrees, and the two scientists from Tora were forced to the conclusion that it was warmed by the internal heat of the satellite. They later learned that the assumption was nearly correct, although the warm climate of Thares was actually brought about by the presence of huge deposits of radioactive minerals near the surface, rather than by the high temperature of a molten interior. The waters brightened somewhat with the coming of the noon-day sun, though they still retained the red-brown color to a great degree. The sun itself was almost at the zenith, thus indicating that about half of the long Callistonian day had passed - half of a day which, in earth time, was the equivalent of more than sixteen and a half days. Darkness would not come for a long time.