A world you can fall off:
kROTH
- the Earth with one-directional gravity

The Kroth trilogy explores an Earth with an absolute up and down.

Since my edition of the trilogy provides no map, I have designed one, hoping my reading of the text is accurate - I had to guess the positions of the main Southern Hemisphere cities.  I trust my guesses are reasonable. 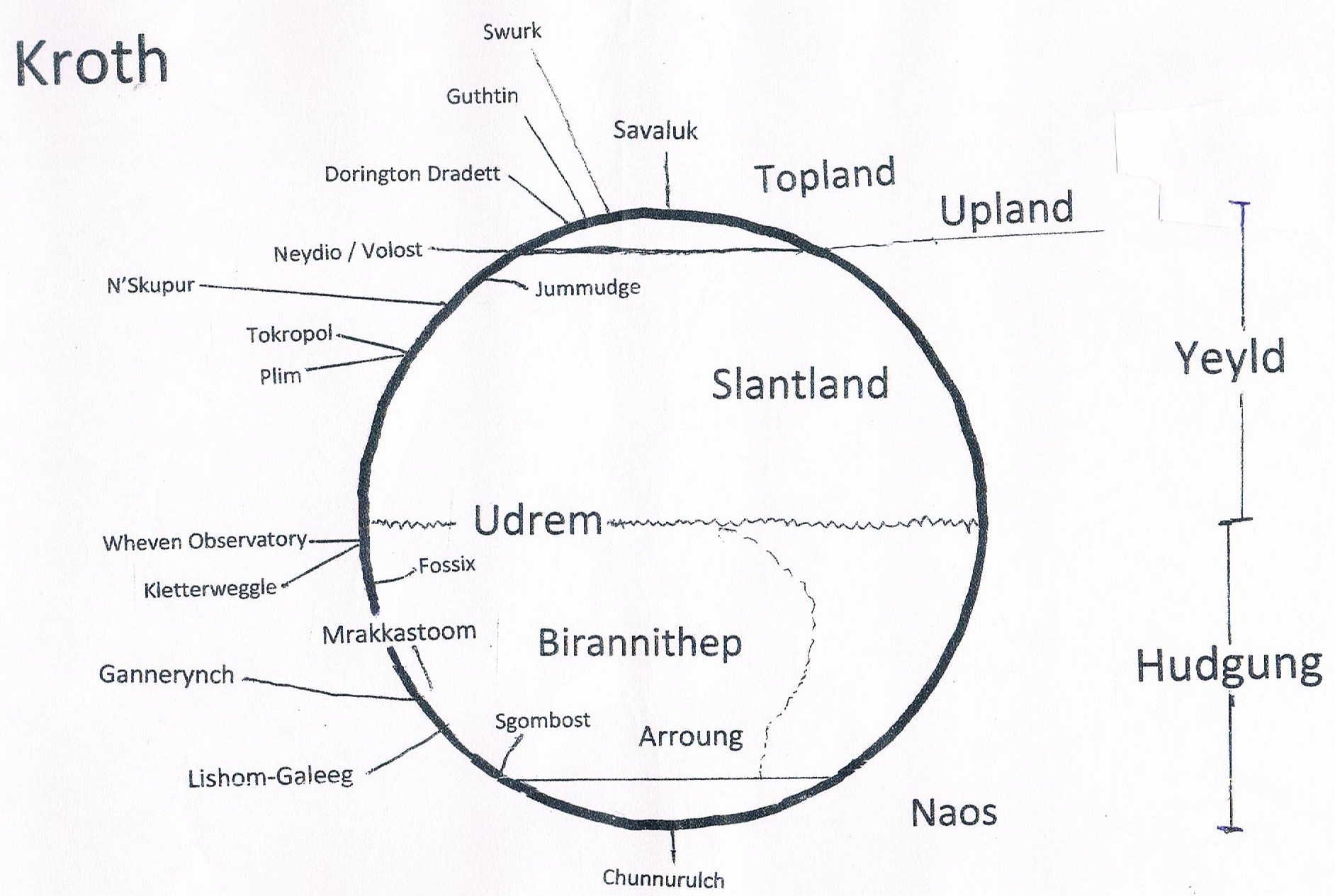 Most of the geography in the tale is clear enough.  Yeyld is the Northern Hemisphere, Hudgung the Southern.  Udrem is the tropical forest circling Kroth at the vertical Equator.  Upland is the civilized country where the slope is 30 degrees or less - in other words, the land above latitude 60 north.  Topland, the upmost part of Upland, is the privileged far North, maybe above 87 or 88 degrees latitude - the only ground that feels really flat.  It is perhaps a mere three hundred miles across, rather too small to be marked with a boundary line on this sketch.

You will note that most of the settlements mentioned in the story are on the same north-south line, though an exception to this is Mrakkastoom, which is stated to be 118 miles East of Gannerynch.

Stid: You refer to Kroth as "an Earth".  By "an Earth" do you mean a parallel-universe (or alternate) Earth, or simply an Earthlike world? 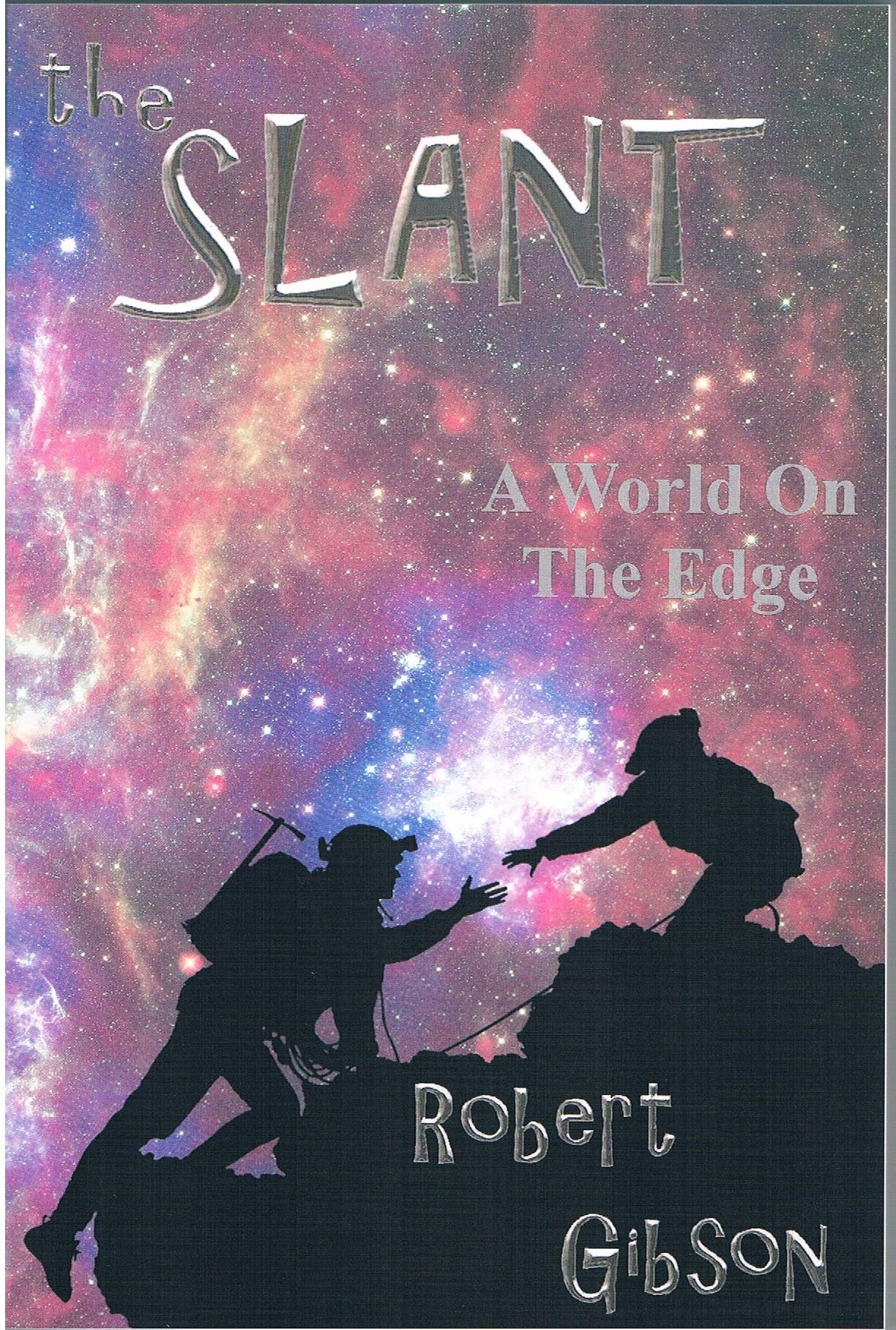 Zendexor:  Neither, really.  It's more a case of: Kroth is Earth, but a different "wing" of it, facing out onto a different universe.  Imagine a house with several views.  Imagine that from one of them - our familiar  Earth-view - we behold the universe we know, the one with multi-directional gravity.  In this analogy, Kroth is another "window", which "faces out into" a simpler universe, of uni-directional gravity.  Kroth, if you like, is a perceptional aspect of Earth - an aspect which we in our present state do not experience.

Zendexor:  Well, since gravity works only one way in the Kroth universe, how else could it be?

Stid:  Let me get this straight...

Zendexor:  You have!  Straight is the word - 'up' and 'down' are everywhere parallel!  So, the planet's North Pole is the only region where you can find a level landscape - reasonably level for a few hundred miles around.  Further down, you find yourself on the Slope... and the further you go, the greater the tilt... and the soldiers of the north must adjust, as they descend southward on grass-skis to prepare to defend their coveted Topland...

The last line of trees approached.  This was a vital test.  Beyond must stretch open country and the obviousness of the Slope, pointing us at twenty degrees down into the endless gulf.  And now I would be skiing directly towards the sagging blue.  The solemn ethical stuff about war and peace - how much had it diverted my attention?  Distracted me, while a crust of stability formed over the molten terrors of vertigo?  And when the crust got too brittle and thin...  this is what you must do:

Hunched on your skis, being tilted yourself, you re-interpret the Slope as a level stretch with your movement as a magnetic pull along rather than a gravitational pull down.  You can do this provided you refrain from looking too closely at trees and houses and anything else that is too plainly not at right angles to the ground.  Of course it's just a trick...  sooner or later the cloak of protection it provides is snatched away by a sudden jolt of reality, and when that happens you'd better have a replacement ready to wrap round you...    [The Slant, page 112] 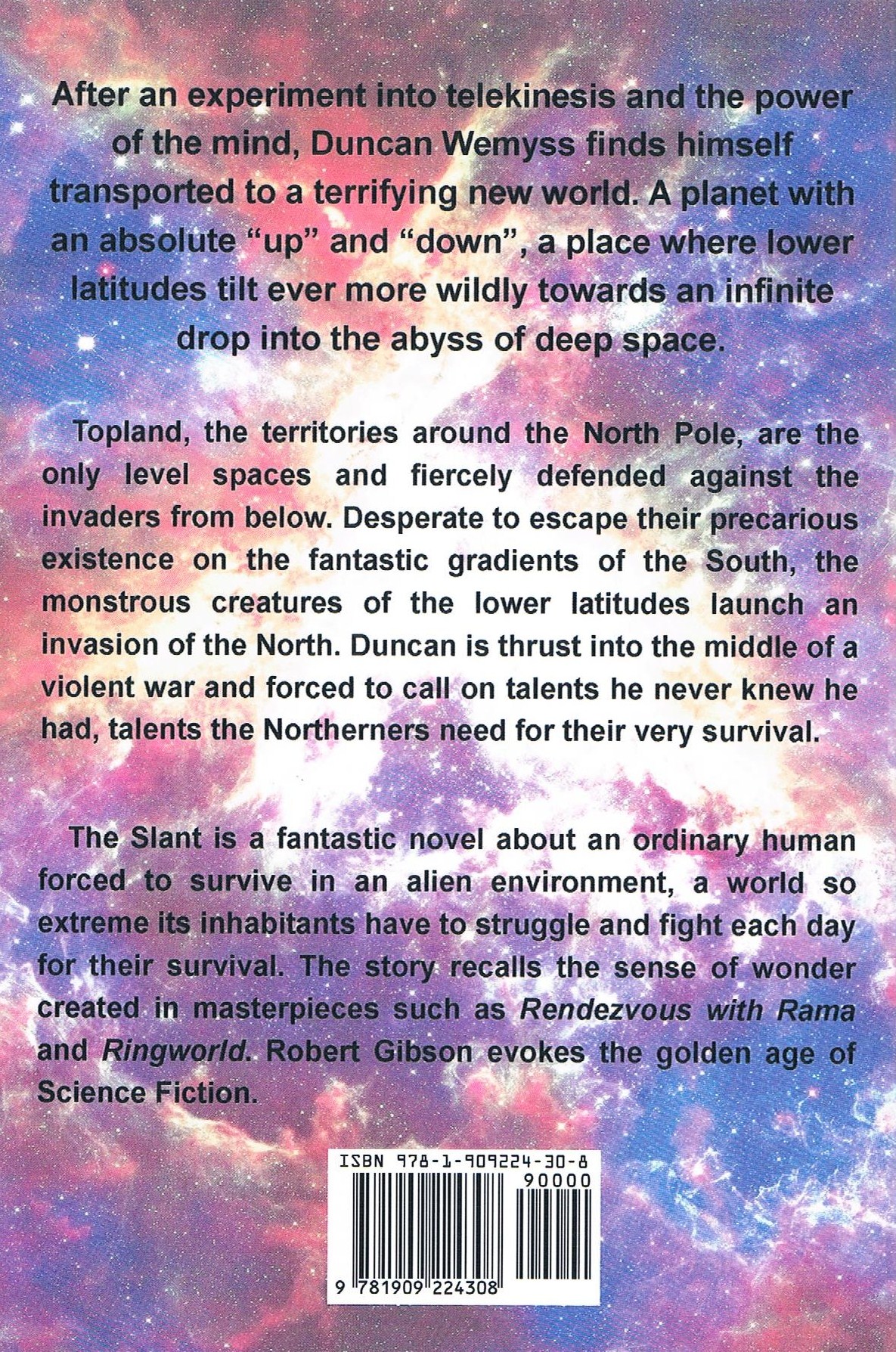 In a constant battle of wits with his own fears Duncan Wemyss continues to contrive dodge after dodge to keep his nerve as far down as Latitude Sixty.  Here, where the Slope is thirty degrees, the "dodges" don't work any more.  You simply have to make the thorough inner adjustment, to adopt the mind-set known as The Slant, if you are to get any further.

For practice seemed to show that a Slope of thirty degrees was a kind of psychological turning point: the world now tipped so much, that there was a mass-extinction of those pretences and mental subterfuges which had kept us going so far.  [The Slant, page 118]

Duncan achieves this, and henceforth can look the big Southward "dip" in the face.

Last night our impression was that we had camped in a glade.  Now the entire prospect was opened up by the daylight, the terrain exposed as it really was, the trees far fewer than when they had loomed in darkness.  This allowed the thirty-degree world-tilt of Latitude Sixty to sweep downward panoramically before our eyes.  We saw, not a forest holed with glades, but a bush-speckled grassland tipped towards the southern blue...     [The Drop, page 1] 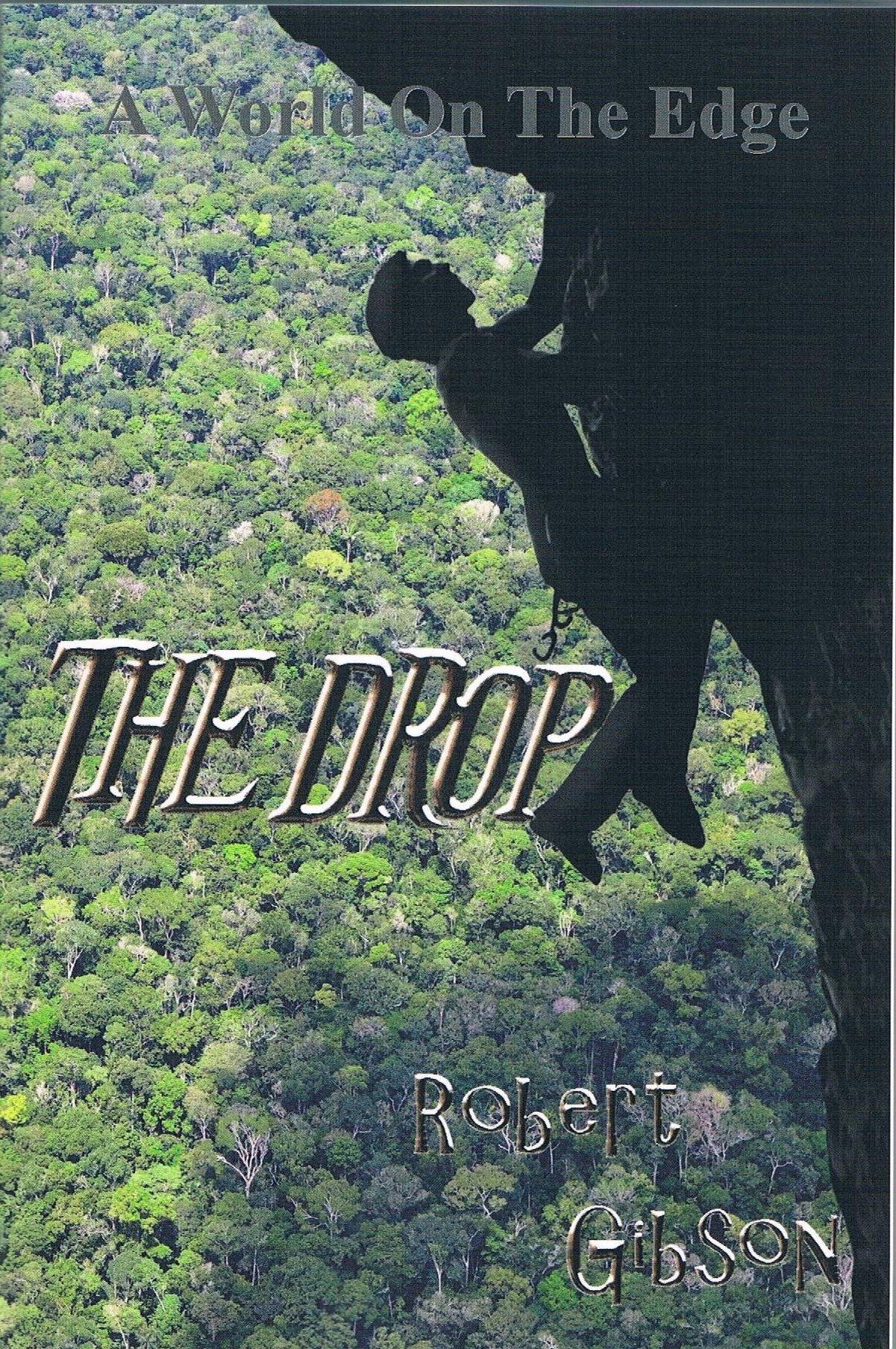 Vertigo no longer acts as a check on his decision or his daring.  The lower world beckons.  Lower latitudes incline all the way to a vertical equator, and the Southern Hemisphere overhangs - a real Down Under (which is explored in volume three).

A naive universe, if you like.  More like what a child might imagine... only it turns out not to be imaginary - the danger of plummeting for ever, if you fall off Kroth, is real.

And yet as I say, this is not an alien world but another aspect of Earth. From all this you will gather, that there's a lot more to our planet than we think -

Stid:  Still sounds like an alternate-Earth story, to me.

Harlei:  But, Stid, doesn't your term "alternate" suggest some kind of parity, like that between the different Earths of Ring Around the Sun and All Flesh Is Grass, in which each Earth is separate but equally real?  Whereas it sounds as though what Zendexor is talking about is something more organically related, a complex of facets, maybe unequal... 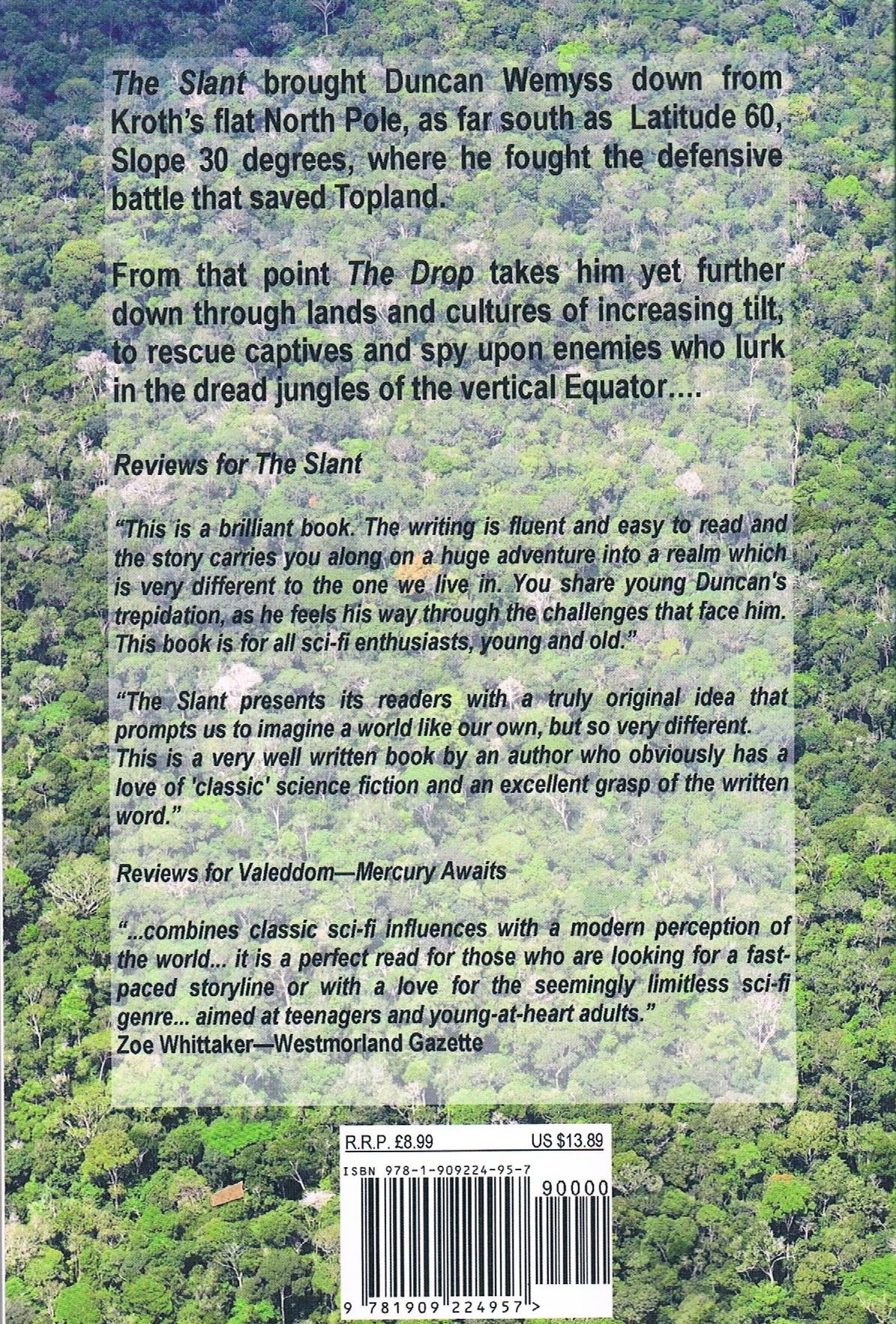 By analogy with atomic physics:  Kroth is the ground state of reality, while Earth is an excited state.

Not only is the basic theme of uni-directional gravity unique to these volumes, but the explanation also is original.

As the world's "ground state", Kroth is in a way more real than Earth - more permanent, anyhow.  The Earth which we know is dependent, it turns out, upon rational scientific belief - a mental construct which creates the reality it describes.  If events occur to undermine that belief, the construct collapses.

The collapse occurs early in volume one, The Slant, for reasons given in the story.

The author then has a lot of fun depicting the reactions of the narrator, a teenager named Duncan Wemyss who finds himself on the Slope of Kroth.

His subsequent adventures take him across both hemispheres and through war, revolution and Renaissance, among the varied Slope-influenced cultures of Kroth.

He fights for his adopted North Polar land against lower-gradient enemies in The Slant, goes on a spying mission as far as the vertical Equator in The Drop, and explores the fantastic land Down Under in The Rise. 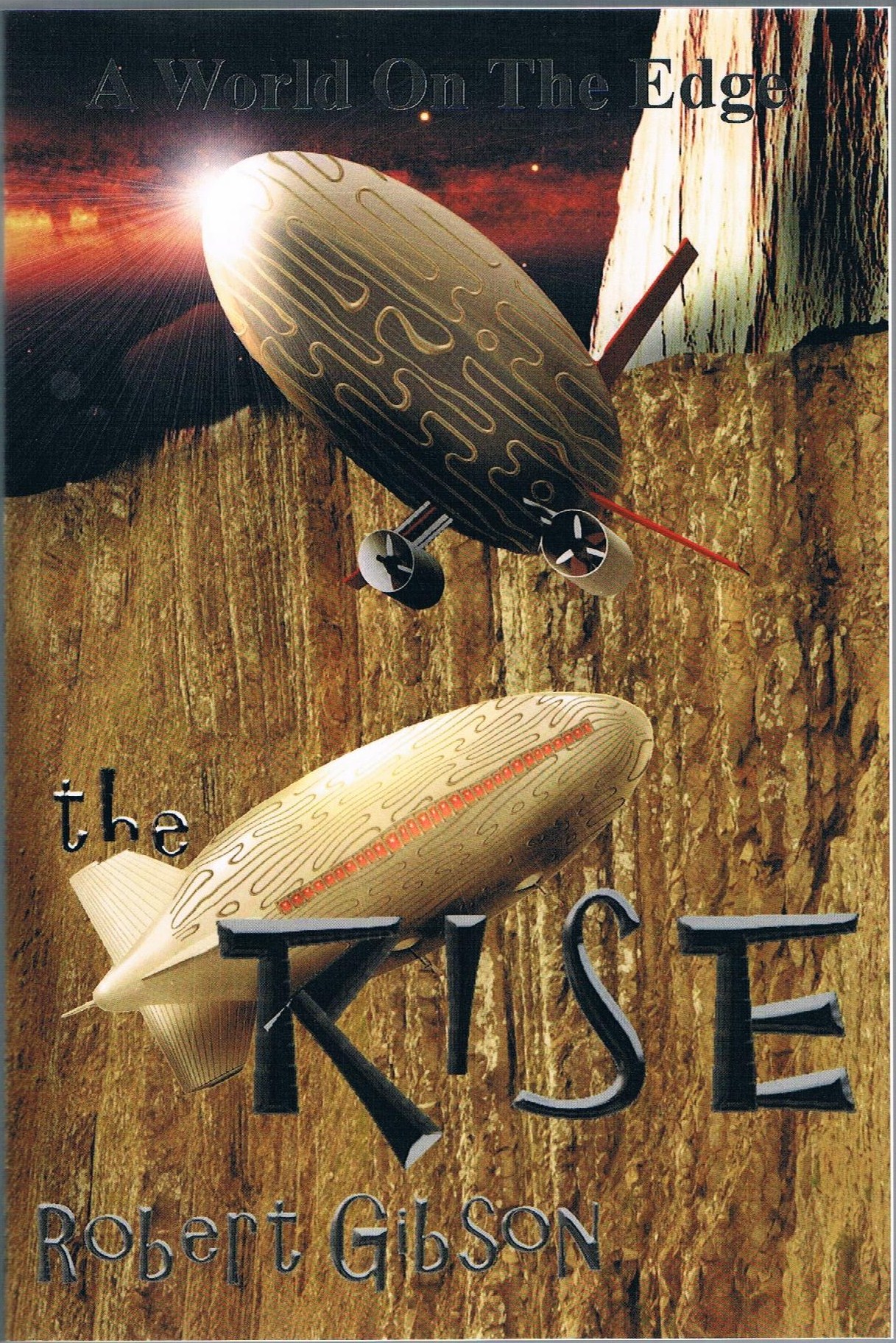 So it's an adventure tale, but the author also likes to explore the implications of his idea, to flesh it out with likely biological, socio-political and religious implications.

From the cows and sheep which have evolved to graze laterally on the Slope by growing two legs longer than the other two, to the fuzzy religion which parallels the fuzzy and rudimentary science of Kroth, and the social taboo concerning the word "d - r - o - p", the reader is given food for thought in various flavours.

The protagonist, Duncan Wemyss, undergoes many perils, dilemmas and uncertainties, but his loyalties remain with the Toplanders of Kroth. 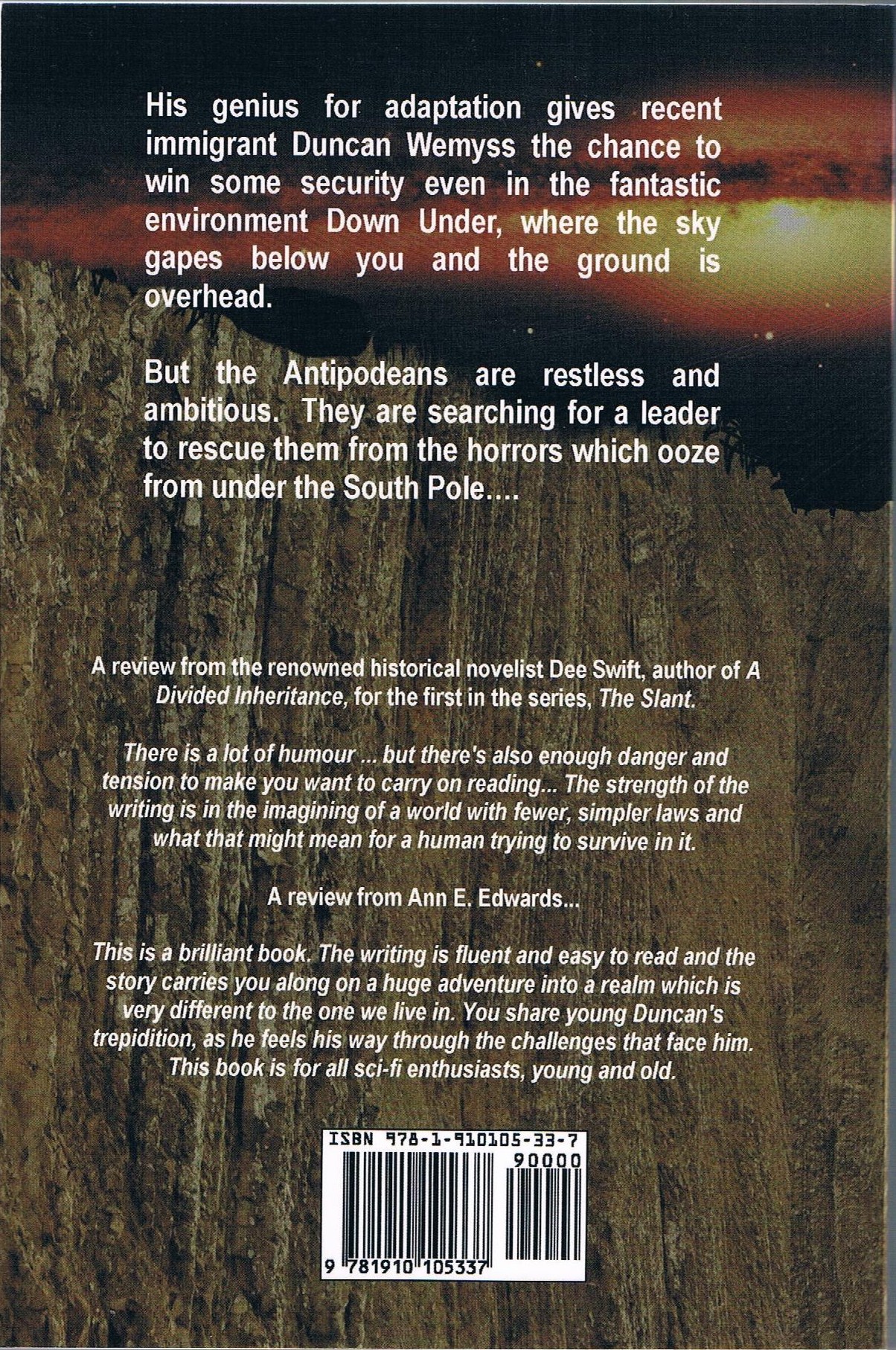 For Kroth's "fuzzy" science and religion see the religion page.

See the notes sent in by Christine Sims for a reader's reaction to The Drop and The Rise.