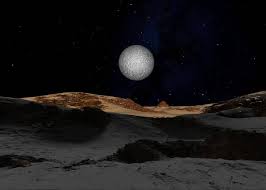 [ + links to: Cerberus - On the Shoreline of Darkness - Pluto's endless mysteries - The Slavanns Must Play - Styx - What to see on Pluto ]

Stid: Though actually, during the late twentieth century it became, briefly, closer than Neptune - during twenty years out of its 248-year orbit.  But we're not going to mind that.

Zendexor:  Correct.  All that concerns me is vintage Pluto, the Pluto of our OSS imaginations.

Stid:  A bit cold for a vintage.

Zendexor:  True - and let it be said that some authors even in the Golden Age were well aware that it wouldn't just be enough to put on a warm fur coat if you went for a walk on Pluto.

One of the explorers in The Red Peri looks around him: 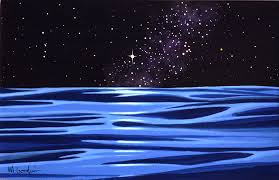 ...Directly to his right lay a patch of glistening, snow-like white; but he knew it wasn't snow, but frozen air.  One dared not step in such a drift; for the cold would bite through his insulated space suit, since frozen air was a far better conductor of heat than the rocky ground.

Zendexor:  But note how attitudes can vary: other OSS writers are more "topological" in their stance with regard to temperatures on Pluto.

Stid:  What the heck is a topological stance??

Zendexor:  One which is more concerned with relation than with quantity.

I mean, it's the kind of attitude by which you just say, never mind exactly how cold Pluto is, all that needs to be stressed is that it's colder than the other planets.  That's your nod of token respect in the direction of science.  It's enough, then, to make sure you wear warm clothing on Pluto.

And if you're a hairy Plutonian you don't even need to do that.

Ten minutes later, Captain Future and Grag and Tharb were in a small streamlined Planet Police flier, rocketing up from the spaceport and heading northward.  Curt wore a suit of furs, but the hairy Tharb and the impervious robot needed no protection. 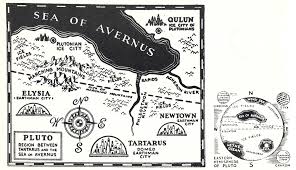 You see - the place isn't all that hopeless; you can live there.  Still, it must be said, even in the anthropocentric Solar System of Captain Future, Pluto is somewhat forlorn.  Out of the mainstream of civilization; culturally muted, shall we say.

Stid:  Limited facilities, yeah.  Apart from the colonial capital, Tartarus, there seems to be not much else, other than Qulun, ice city of the shaggy native Plutonians:

Curt Newton and Grag accompanied the Plutonians along a narrow path that wound back through glistening ice-hills.

The darkness was intense but Gorr and his men seemed to know their way perfectly.  Presently they entered a small enclosed valley, in which stood the city of the Plutonians.

It was a city of ice.  Every one of its square one and two-storied buildings was a monolith of glittering ice, constructed by the simple process of setting up forms and pouring in fresh water which immediately froze, and remained frozen.

Gorr led them to a big, square ice-building that was larger than any of its neighbours...

The big room was lit by flaming torches of bone soaked in oil, stuck into metal sockets.  The benches and chairs were of solid ice, monolithic with the floor, and covered with furs.

A dozen Plutonians of both sexes, all wearing simple leather garments, stared wonderingly with their phosphorescent eyes...

Stid:  I don't know about you, Zendexor, but I think the city of Qulun is somewhat rudimentary.

Zendexor:  Calling Captain Future gets more interesting with regard to the geography of Pluto.  In particular, the Marching Mountains are quite something - a line of glaciers which crunch their way across the planet in a perpetual circle, advancing faster than a man can run.

Also it must be said that Edmond Hamilton scored a bull's eye when he named one of Pluto's moons Charon! - for lo and behold, in 1978, the year after Hamilton's death, the first Plutonian moon was discovered, and it was named Charon.  (He also scored bulls-eyes with the other moons Cerberus and Styx.  So he got three out of the five currently-named moons - only Nix and Hydra were unforeseen.)

But we were talking about culture... and as far as culture is concerned, I concede that Pluto has some catching up to do. Here we move on to a different author:

Still they flew outward.  To Pluto.  The black planet.  The border-world.  The last outpost against night of void cosmos.

Pluto, the ultimate planet - and the eldest.  It must have cooled enough for life when Jupiter was still a second sun, when Earth was not yet flung molten from the central star.  Evolution - planetary and organic - must there have run its course.

Pluto, whose book of life should have been written to the end, sealed, forgotten.  Star of darkness and death, was it yet undead?  A vampire world, reaching from death across the void, to pluck from Earth the warm fresh fruit of the sun?  [The Plutonian Terror]

The Terror, when the explorers reach it, is truly grim - "the hideous consummation of organic evolution upon the coldest planet".  Brain in a ruthless sense, but not much cuddly culture.  (For more on this story, see the page on hyper-brains.)

Visual art, meanwhile, has done a merrier job - thanks to the two paintings by Frank R Paul.

Harlei:  I reckon you're right there.  I'd rather look at those pictures than read anything that has so far been written about the icy planet. 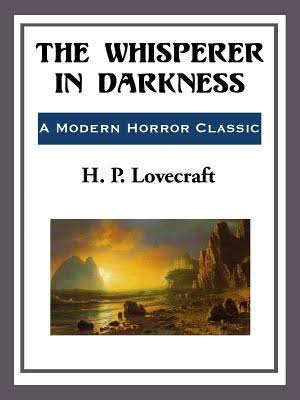 Zendexor:  Of course there is the culture of 'Yuggoth', the name given to the planet by its weird denizens in the horror classic The Whisperer in Darkness, where we hear of "Yuggoth and its black secrets" through the mouth of an inhabitant of the state of Vermont, although the brain behind the mouth is not what the listener assumes: 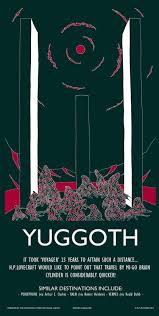 "There are mighty cities on Yuggoth - great tiers of terraced towers built of black stone like the specimen I tried to send you...  The sun shines there no brighter than a star, but the beings need no light.  They have other subtle senses, and put no windows in their great houses and temples.  Light even hurts and hampers and confuses them, for it does not exist at all in the black cosmos outside time and space where they came from originally.  To visit Yuggoth would drive any weak man mad - yet I am going there.  The black rivers of pitch that flow under those mysterious cyclopean bridges - things built by some elder race extinct and forgotten before the beings came to Yuggoth from the ultimate voids - ought to be enough to make any man a Dante or a Poe if he can keep sane long enough to tell what he has seen.

"But remember - that dark world of fungoid gardens and windowless cities isn't really terrible.  It is only to us that it would seem so..."

So says the human mouth; but the beings which fly to Earth and infest the remoter mountain districts of Vermont are masters of surgery, and can transplant brains...  with gruesome results. 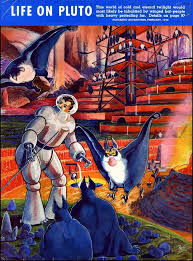 Harlei:  The story is powerful, yes, but we aren't taken to Yuggoth so we don't explore it directly.  Still, we can be sure, I reckon, that its civilization must lack the cheerful aspect of the Frank R Paul paintings.

Zendexor:  In fact I can't point you in the direction of any story that embodies the cuddliness of Paul's Plutonians. 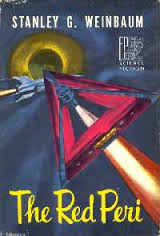 Instead I could give you the crawling life - if it is life - encountered in The Red Peri:

Keene looked.  Out of a narrow chasm or cleft in the ridge something moved.  For a moment Keene thought he saw a brook flowing, but a brook - liquid water - was an impossibility on Pluto.  He squinted sharply.  Crystals!  Masses of crystals, gray-white in the dusk, crawling in slow parade...

"Don't forget," said Nestor, "that Pluto has thirty-six per cent more surface than the whole Earth.  Not a ten-thousandth part of it has been explored..."

Harlei:  Wow - that's worth remembering: that the Old Solar System Pluto was much bigger than what we now know that world to be.

Zendexor:  Yes, Weinbaum thought it was larger than Earth, whereas we know it to be only about five-sixths of the diameter of the Moon.  Unusual for an OSS world to be so different in physical size from its NSS self.  So our idea of Pluto has shrunk.

Stid:  You can tell how much it has shrunk when you recall that by 1977 it's fictionally described as a mere remnant of the asteroid progenitor planet:

"...Minerva exploded and dispersed to become the Asteroid Belt.  The greater part of its mass, we're fairly sure, was thrown into the outer regions of the Solar System and became Pluto..."      [Inherit the Stars (1977), p.197]

Zendexor:  Yes, as I was saying, Pluto shrank... yet with a shimmer of largeness remaining with it, the ghostly remains of our old over-estimate of it...

Stid:  An odd way you have of putting things.  The fact is, we used to think Pluto was bigger, and now we know it's smaller, so we change our view.  Shimmerings don't come into it.

Zendexor:  Ah, but they do.  The past ideas we have about things trail after them like tails of a comet...  Even the idea of life on Pluto lingered so long that it persists in the work of one writer who stands on the cusp between Old and New Solar System.

I refer to Wait It Out. 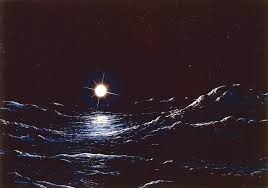 Something heavy is nosing up against me.  I feel its weight against my back and the backs of my legs.  What is it?  Why am I not terrified?

It slides around in front of me, questing.  It looks like a huge amoeba, shapeless and translucent, with darker bodies showing within it.  I'd guess it's about my own weight. 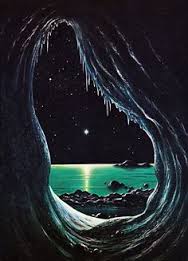 Life on Pluto!  But how?  Superfluids?  Helium II contaminated by complex molecules?  In that case the beast had better get moving; it will need shade come sunrise.  Sunside temperature on Pluto is all of 50 degrees Absolute.

No, come back!  It's leaving, flowing down towards the splash crater.  Did my thoughts send it away?  Nonsense.  It probably didn't like the taste of me.  It must be terribly slow, that I can watch it move.  The beast is still visible, blurred because I can't look directly at it, moving downhill toward the landing vehicle and the tiny statue to the first man to die on Pluto...

See the OSS Diary, 6th August 2016, for the spiral beings of Pluto.

For the theme of Pluto as a forlorn-hope destination see "Playing One's Last Card on Pluto" in the OSS Diary for 1st January 2017 - regarding Keith Laumer's The Other Sky.

See the OSS Diary for 28th February 2017 for more comment on The Whisperer in Darkness, including the level of illumination on Pluto's surface.

For Dis, "fourth moon of Pluto", see For the Plutonian To-Do List.

For the Plutonian conflagration in Niven's World of Ptavvs, see the Diary,
Niven and Clarke on the Cusp.

For a fascinating landscape see The Frozen Gardens of Pluto.

For a view on nearing the planet see Approaching Pluto.

Supporting the ninth planet's definition as such: From Chaucer to Pluto.