Reality, as in the case of Charon, Leda and Styx, has caught up with fiction: Pluto really does have a moon called Cerberus.

Although, for some reason, the International Astronomical Union spells it the Greek way, Kerberos...

Harlei:  Sounds silly to me.  Pluto is Latin; why don't the IAU stick to Latin for the moons, then?

Zendexor:  Don't ask me.  This is the same IAU that demoted Pluto from planet-hood, remember.  Anyhow, forget the IAU.  Our authority is the text of The Magician of Mars - a novel about the deeds of Ul Quorn, great enemy of Captain Future.

Chapter One opens the action on Cerberus.

As the tiny, star-like disk of the Sun sank behind the bleak rock plain, a whistle shrilled harshly through the chill dusk.

The hundreds of convicts in gray uniforms who had been excavating beryllium ore from the rock pits, stopped work.  They shuffled sluggishly into columns and then stood waiting in sullen silence...

Stid:  Before you go on, Zendexor, I think in all fairness that you ought to warn your readers that you really haven't got much information to offer about this Prison Moon.  Just one chapter -

Zendexor:  And that chapter mostly taken up with Quorn's escape.  Little left for a description of what the little moon is like.  Very well, so far I accept what you say -

This dreary, forbidding little world was Cerberus, one of the three moons of the planet Pluto.  Here was located the great, escape-proof Interplanetary Prison, the living tomb of the most dangerous criminals of all nine worlds.

So there you have it. A "dreary, forbidding little world"...

Stid:  Remarkable how generous the Old Solar System is, with its breathable atmospheres even at Pluto's distance - at any rate in the saga of Captain Future.  But despite its oxygenated atmosphere, we are not told about any plant life on Cerberus, or any life at all apart from the convicts and their guards.

Zendexor:  True, and I'm also going to admit that the Cerberus episode is not a patch on the escape-from-prison-planet in The Garments of Caean (an interstellar adventure, and therefore outside this site's scope).  Here in chapter one of The Magician of Mars we're not anywhere near that level.  We're in adolescent cliché-land, if you like.  Yes, I admit everything.

Stid:  Then give up on this page!

My justification is simple: the scene in which Ul Quorn makes his escape from Cerberus has lodged in my mind.  That must happen for a reason. 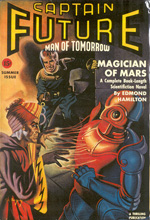 Ul Quorn was different from the other convicts.  He was a slender, small man who had the pallid red skin and high forehead of a Martian.  But the fineness of his wrists and ankles, the handsomeness of his features, were Venusian.  And his sleek black hair and black eyes were those of an Earthman.  Ul Quorn was a mixed breed, the most dangerous convict that Interplanetary Prison had ever harbored.

Quorn's hands were calloused from the months of harsh prison labor in the beryllium diggings.  No one would have recognized in his silent, shuffling figure the criminal genius who had once terrorized the System by sheer scientific mastery and cunning - the half-legendary Magician of Mars!

Quorn and his comrades marched silently on through the chill twilight, between vigilant guards armed with heavy atom guns.  The dusk was deepening into darkness.  In the starry sky bulked the great white sphere of Pluto, the ice-sheathed outpost world of the System.  Beyond it gleamed its two other moons, Charon and Styx.

The black, massive walls of Interplanetary Prison loomed in the planet-light ahead.  The great doors of inert metal were now open.  Bright krypton-lamps cast a white glare on the sullen convicts as they passed across the main court of the prison to the massive cellhouses.  Overhead droned fishlike Planet Patrol cruisers, keeping watch upon the moon...

Zendexor: Just the word, Harlei.  Stid, there's your answer.  One man's cliché is another man's archetype.