With its four valence electrons, the element silicon makes us wonder: might it, rather than carbon, be the basis of a life system, somewhere?  And if so, what might silicon-based life-forms be like?  Writers of the Old Solar System have given us some possible answers.

Its skin was of an oily smooth grayness.  Its motions were slow, as became a creature who burrowed in stone and was more than half stone itself.  There was no writhing of muscles beneath that skin; instead it moved in slabs as thin layers of stone slid greasily over one another.

It had a general ovoid shape, rounded above, flattened below, with two sets of appendages.  Below were the "legs", set radially.  They totaled six and ended in sharp flinty edges, reinforced by metal deposits.  Those edges could cut through rock, breaking it into edible portions.

On the creature's flat undersurface... was the one opening into its interior.  Shredded rocks entered that interior.  Within, limestone and hydrated silicates reacted to form the silicones out of which the creature's tissues were built.  Excess silica re-emerged from the opening as hard white pebbly excretions.

Zendexor:  More in the nature of exhalations, maybe... but let's read on.

How extraterrologists had puzzled over the smooth pebbles that lay scattered in small hollows within the rocky structure of the asteroids until the siliconies were first discovered.  And how they marveled at the manner in which the creatures made silicones - those silicone-oxygen polymers with hydrocarbon side chains - perform so many of the functions that proteins performed in terrestrial life.

From the highest point on the creature's back came the remaining appendages, two inverse cones hollowed in opposing directions and fitting snugly into parallel recesses running down the back, yet capable of lifting upward a short way.  When the silicony burrowed through rock, the "ears" were retracted for streamlining.  When it rested in a hollowed-out cavern, they could lift for better and more sensitive reception.  Their vague resemblance to a rabbit's ears made the name silicony inevitable...

Stid:  Only for those who know the word "coney" as a synonym for "rabbit".  And not very appropriate for such a slow creature, I should have thought.

Zendexor:  Maybe it had no need for speed...

...The more serious extraterrologists, who referred to such creatures habitually as Siliconeus asteroidea, thought the "ears" might have something to do with the rudimentary telepathic powers the beasts possessed...

Harlei:  And they are something more than beasts, aren't they?  The story is called The Talking Stone, after all... pity the author allowed the detective-story plot to distract him from consideration of the silicony's own point of view.

Zendexor:  He admitted as much, in a postcript, after some readers had found fault with him:

"As I reread the story now, I must admit the readers are right.  I showed a lack of sensitivity...  If I had to do it over again, I would certainly be warmer in my treatment of the poor thing..." 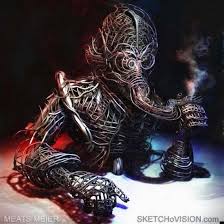 Stid:  He did lavish enough description on it, anyhow.  We get to know it in some detail - more than we get for the metal-eating "moon-pup", Eek, in the Captain Future books.

Virtually all we learn about Eek is that he is a "native lunar siliceous animal who was non-breathing and who ate metals and ores.  Eek especially loved silver and gold."

Zendexor:  Ah but we do know one other interesting thing about Eek - here's another brick in the edifice of OSS common ideas - Eek also is telepathic!  Yes, here we have another type of telepathic "silicony".

And it's fortunate that this thought-reading ability of Eek's - plus his appetite for metal - changes the odds in the Hall of Enemies on Styx.  The Stygians, pawns of the evil Dr Zarro in Calling Captain Future, have captured the hero, paralyzed him, encased him and doomed him and his companions to a living death.  But then Eek crawls into range...

It had got his thought, Captain Future exulted!  He repeated that thought-command with redoubled force.  "Come toward me, Eek!"

Slowly, doubtfully, the moon-pup started toward the glassite case in which Curt sat imprisoned.  The little animal stopped in front of the case and looked up at Curt puzzledly.

"Eek, you must chew out a piece of the glassite at the bottom of this case!" Curt thought.  "It is very good to eat - it contains much precious metals such as you love."

Eek's whole appearance brightened as he got that thought...

Stid:  I can imagine what happens next.  Eek frees the hero by chewing through something.  The Captain Future stories are fun but are not the most profound sf ever written so I don't suppose we can expect them to give us any insight into the life of an intelligent silicon being.  I want more.  Give! 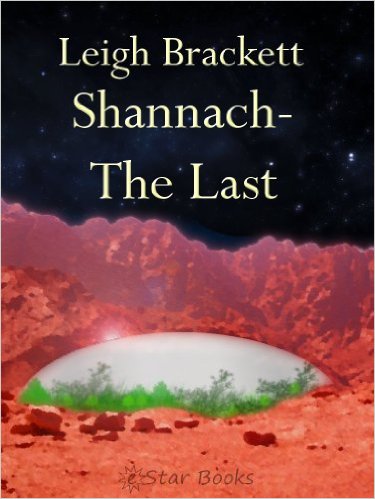 Zendexor:  All right, let's us swerve our attention to Shannach - The Last.  This, by the way, is one of the few great tales set on Mercury - and I mean on the real OSS Mercury, with the Twilight Belt dividing eternal day from night.  Shannach himself is a powerful and ruthless super-being, an alien giant, enslaver of humans, yet somehow he does not come across as evil.

The great hall where the silicon giants sit and slowly die is one of the memorable scenes in planetary adventure.  (I find it oddly reminiscent of the hall of kings and queens in Charn - that eerie dead world in The Magician's Nephew.)

"So you hate me as well as fear me, little human?  You would destroy me?"  There was a gentle laughter inside Trevor's mind.  "I have watched generations of humans die so swiftly.  And yet I am here, as I was before they came, waiting."

"You won't be here forever," snarled Trevor.  "These others like you died.  You will!"

"Yes.  But it is a slow dying, little human.  Your body chemistry is like that of the plants, the beasts, based upon carbon.  Quick to grow.  Quick to wither away.  Ours was of another sort.  We were like the mountains, cousin to them, our body cells built of silicon, even as theirs.  And so our flesh endures until it grows slow and stiff with age.  But even then we must wait long, very long, for death."

Something of the truth of that long waiting came to Trevor, and he felt a shuddering thankfulness for the frailty of human flesh.

"I am the last," whispered the silent voice.  "For a while I had the companionship of minds, but the others are all gone before me, long ago."

Trevor had a nightmare vision of Mercury, in some incalculable future eon, a frozen world taking its last plunge into the burned-out sun, bearing with it these endless rows of alabaster shapes, sitting in their chairs of stone, upright in the dead blackness underneath the ice. 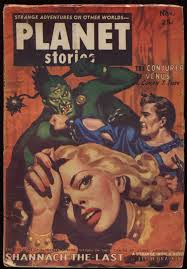 He fought back to reality, clutching his hatred as a swimmer clings to a plank, his voice raw with passion and bitterness as he cried out.

"Yes, I'll destroy you if I can!  What else could you expect after what you've done?"

"Oh no, little human, you will not destroy me.  You will help me."

Harlei:  Stid has certainly got what he wants there - an intelligent silicon being...  too intelligent for comfort, especially as Shannach combines brains with power (mind-power again! - something all siliconies seem to have no matter who writes about them).

But - let me state my wish now - I sometimes get just a little bit wearied by the sense of loss, lateness and regrets in so many of Leigh Brackett's splendid tales.

Zendexor:  I'm the same; I guess we both would have liked to have been given a tour of Shannach's civilization when it was in its prime.

That's not on the cards, so where do we look for our siliceous metropolis?

Well, for a thriving city of silicon beings (and on Mercury again - the OSS overlaps continue), you can turn to the city of Pezerjink on Valeddom, if you like.  Only - here you have the opposite problem to what you had before.  You get given, or rather the narrator sees, so much, when he gets far in, that his vision has to reject it as it is, and translates it into terms he can understand.  False terms.  That's the only way he can escape.

Stid:  I guess there's not much chance of mutual understanding between carbon and silicon life-forms...  It's difficult enough between two human cultures...

Zendexor:  So we're back to mere observation, void of understanding.  And here we will end with the neatest of visions of a silicon-creature:

"There was a line of little pyramids - tiny ones, not more than six inches high, stretching across Xanthus as far as I could see!  Little buildings made of pygmy bricks, they were, hollow inside and truncated, or at least broken at the top and empty...

"Man, we trailed that line for hours!  After a while, I noticed another queer thing: they were getting larger.  Same number of bricks in each one, but the bricks were larger. 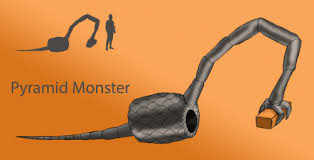 "By noon they were shoulder high.  I looked into a couple - all just the same, broken at the top and empty.  I examined a brick or two as well; they were silica, and old as creation itself...  Fifty thousand - a hundred thousand years.  How can I tell?  The little ones we saw in the morning were older - perhaps ten times as old.  Crumbling.  How old would that make them?  Half a million years?  Who knows?

...Anyway, we plugged along across Xanthus and in about the middle of the afternoon, something else queer happened.  The pyramids ended...

"Yeah; the queer part was that the last one - and now they were ten-footers - was capped?  See?  Whatever built it was still inside; we'd trailed them from their half-million-year-old origin to the present...

"The top tiers of bricks were heaving, shaking, and suddenly slid down the sides with a thin crash.  And then - something - something was coming out!

And so the narrator of A Martian Odyssey meets the out-breather of silicon dioxide.  The creature whose breath is bricks.

For yet more Mercurian silicon life, see the "dragon" on the Mercury page.

For another vision of silicon life on Mars, see The Crimson Courts and My Martian Dreams, entry for 29 September 2016.