The case of Styx is like that of Leda - a moon invented by science fiction, and given a name which is later bestowed on a real newly-discovered moon of its planet.  Styx is a small moon of Pluto, both in truth and in the work of Edmond Hamilton.

Its reality is meagre.  The tiniest of Pluto's five known moons, Styx is probably less than 5 miles in diameter.  Fiction, however, improves upon reality: Calling Captain Future gives us a considerable world. 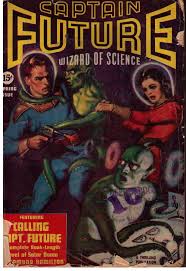 It is believed to be sea-covered, before the Futuremen learn differently.  How liquid water could ever have been supposed to cover a little world so far from the Sun is not, I think, explained.  But the author gets away with it.  Anyhow, the sea turns out to be an illusion - as Future's two colleagues, Joan Randall the police agent and Simon Wright 'the Brain', discover when they are taken there as captives:

The dark prophet turned brusquely to the little dwarf.

"Roj, watch these two until we reach Styx.  The girl is clever, and I won't feel sure of her till she's in the Hall of Enemies."

"She won't get away again, be sure of that," chuckled the dwarf.  "There's no chance of Captain Future finding her where she's going."

The dwarf seated himself in a chair farther down the compartment, his atom-gun on his knee and his beady eyes constantly watching the helpless girl and Brain.  Doctor Zarro went aft.

Joan felt a wave of hopeless despair sweep her.

"They can't really be taking us to Styx, can they?" she asked the Brain desperately.

"I don't know, but I'm afraid so," muttered the Brain.  "There's some great mystery here."

That mystery was soon explained.  The cruiser slowed down, and through the window Joan and Simon saw that they were dropping toward the raging waves of the sea covering Styx... 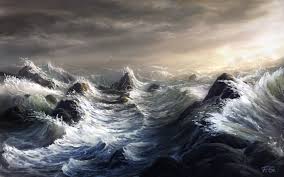 Harlei:  Wait, I've got it!  Raging waves!  If they rage enough, they don't freeze!  That could be what people thought, to explain the supposed liquid ocean at Pluto's distance from the Sun...

Stid:  Good effort, Harlei.  Moving waters resist freezing.  Except - they'd have to move a darn lot, to offset temperatures close to absolute zero, surely!  And what could be the energy source to make them move at that distance from the Sun?  Nevertheless, as I say, good effort.  I might add, that if the waters were assumed to be extremely salty, that would also help them to stay liquid at lower temperatures; of course, they'd have to be extremely extremely salty...

Zendexor:  A good OSS heart beats underneath your sarcastic exterior, Stid.  You have understood that Harlei's attitude is the right one: never mind quantities or degrees, the particular needs of OSS "realism" involve qualitative arguments.  Perfunctory nods of respect for science.  Then, having snatched a bunch of such excuses to suspend disbelief, the reader can get on with enjoying the story:

...to their utter amazement, the cruiser plunged down into the waves - and the waves vanished.

"An illusion," the Brain finished for her.  And Simon's lens-eyes glittered.

The cruiser landed.  Its door opened and chilly air, with a pungent sharpness to it, rushed in upon them.  Roj picked up the Brain.  The big, slow-moving, silent giant, Kallak, took the bound girl.

They followed Doctor Zarro and the furry crew outside.  Joan and the Brain, as they were carried along, had their first glimpse of the secret city to which they had been brought.

Octagonal towers of pallid stone rose all around them, bordering paved streets in which were many of the furred Stygians.  Some of the creatures were afoot, others riding hopping beasts.  All of them wore only a leather harness, seeming not to feel the cold.

The Stygians crowded forward, staring with their great, solemn black eyes at Doctor Zarro and his followers...

Elsewhere we learn some other details about Styx: the character and abilities and concerns of its people, and a "forest of giant club-mosses" close to their city.  The part which the Stygians play, as dupes of Doctor Zarro, is a memorable ingredient in the plot.

For the escape of Captain Future from the Hall of Enemies, see the page on silicon life.