plying the space-lanes of the old solar system 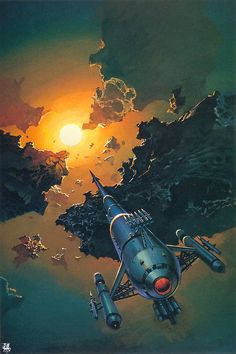 One virtue of OSS space-faring is its lack of fuss.  No back-seat driving from Mission Control.  In fact - no Mission Control.  Hazards out there?  Then use your reflexes, be agile and dodge the meteor swarms!  And so in our genre the art of plying the space-lanes, though no doubt a matter for a crew of experienced spacemen, isn't boxed in by so much regulation and fail-safe systematization as to make a billion-dollar meal of each voyage.

Stid:  But - sorry to spoil things - even an OSS writer should know that there aren't any space-lanes.  You can't have permanent travel "lanes" between bodies whose relative positions are constantly shifting.

Zendexor:  Aaargh, to the brig with ye!  If my favourite authors say there are space-lanes, then space-lanes there are.  Understood, ye scurvy mutinous swab?

Harlei:  Talking of swabs, skipper: that reminds me -

- Recruitment can afford to be quite casual; even to unplanned variation in the number of crew.  That must mean that there's a good deal of spare room on board ship; it's delightfully loosely packed; and the "dirtside" space-ports must swarm with qualified spacemen looking for work.

The shipboard life described in the classic Jay Score, has a wonderfully relaxed feel to it (until disaster strikes, of course).

Here from the pen of a different author is "Noisy" Rhysling, jetman, second class, signing on for a "loop trip to the Jovian asteroids in the RS Goshawk": 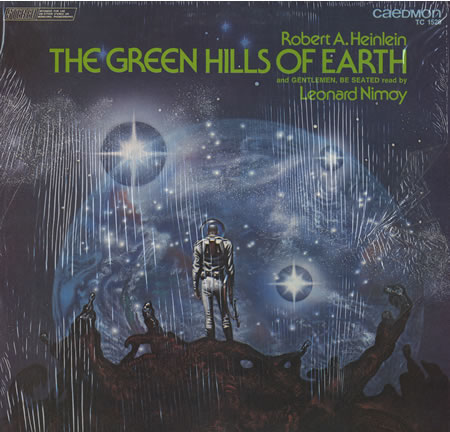 ...The master of the Goshawk knew him; Captain Hicks had been astrogator on Rhysling's first trip in her.  "Welcome home, Noisy," Hicks had greeted him.  "Are you sober, or shall I sign the book for you?"

"You can't get drunk on the bug juice they sell here, Skipper."  He signed and went below, lugging his accordion.

Ten minutes later he was back."Captain," he stated darkly, "that number two jet ain't fit.  The cadmium dampers are warped."

The Captain gestured at the book.  "Scratch out your name and scram.  We raise ship in thirty minutes."

Rhysling looked at him, shrugged, and went below again...

...destined for the calamity immortalized in The Green Hills of Earth.

Zendexor:  Yes, the OSS space-fleets weren't exactly stifled with health-and-safety regulations.  At least, not in the gung-ho days.  To quote the same story: 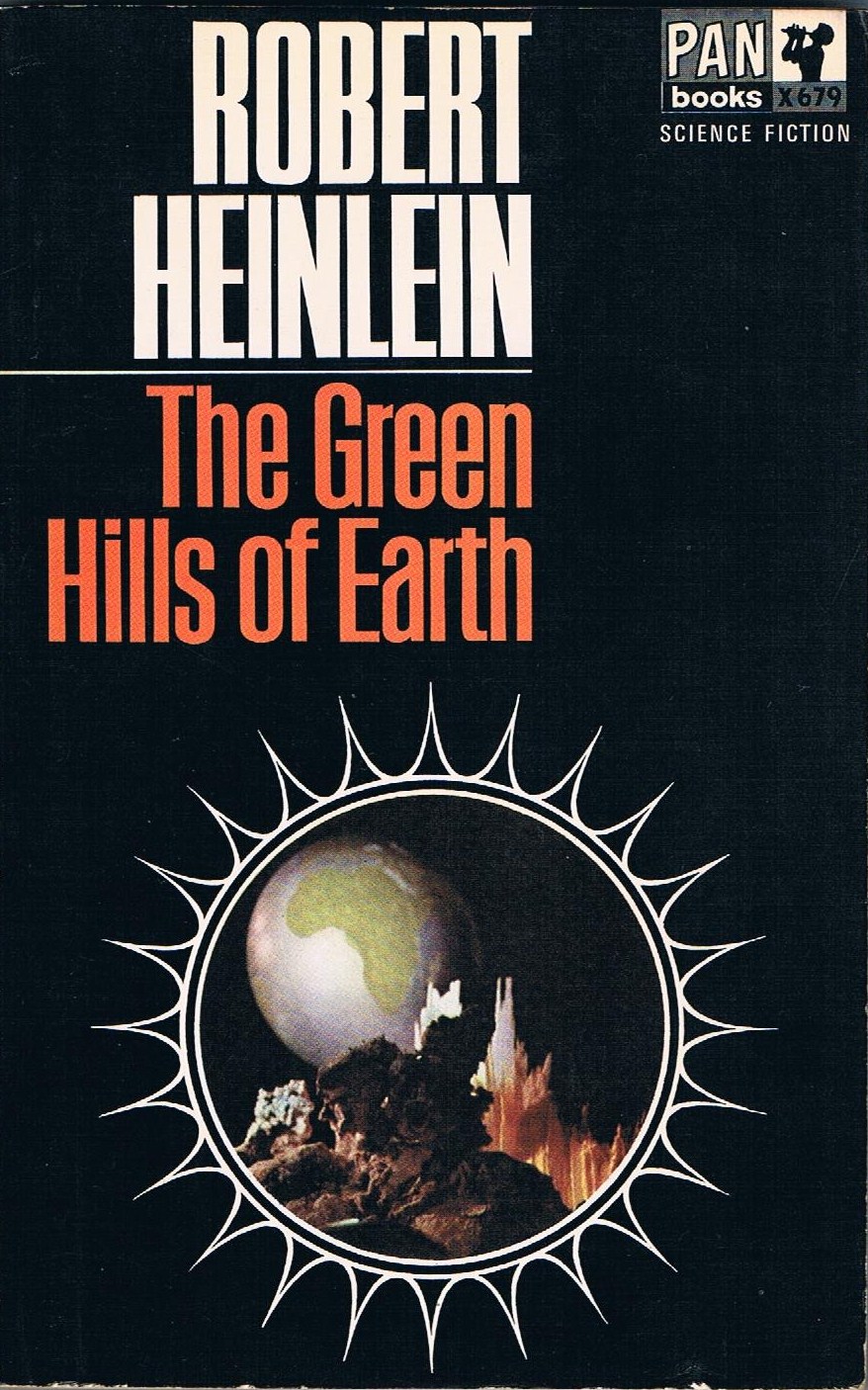 The crew signed releases for everything in those days; a Lloyd's associate would have laughed in your face at the notion of insuring a spaceman.  The Space Precautionary Act had never been heard of, and the Company was responsible only for wages, if and when.  Half the ships that went further than Luna City never came back.  Spacemen did not care; by preference they signed for shares, and any one of them would have bet you that he could jump from the 200th floor of Harriman Tower and ground safely, if you offered him three to two and allowed him rubber heels for the landing...

not swabs but swots

Stid:  If I may dare to interject a comment here, without being hurled out of the airlock without a spacesuit...  I wonder if these hard-bitten spacemen don't detract somewhat from something else we want to have in our tales of the Old Solar System.

I mean to say, we want to keep our awe and respect for the vastness and the perils of interplanetary space, don't we?  And if space travel is that much of a challenge, it needs a... ahem... classier, more professional level of challenger, does it not?

Zendexor:  Only in some kinds of story is that true.  Fact is, OSS literature is large enough to accommodate both types.  Indeed, so large is it, that the sort of criticism you make can be found within the literature itself.

Here is author-turned-astronaut Martin Gibson, passenger en route for the Red Planet in The Sands of Mars, musing on the difference we're talking about:

...he sometimes wriggled with embarrassment as he remembered the crews he had imagined for some of his fictional spaceships.  He recalled Master Pilot Graham, from Five Moons Too Many - still one of his favourite characters.  Graham had been tough (had he not once survived half a minute in vacuum before being able to get to his spacesuit?) and he regularly disposed of a bottle of whisky a day.  He was a distinct contrast to Dr Angus Mackay, PhD (Astron), FRAS, who was now sitting quietly in a corner reading a much annotated copy of The Canterbury Tales and taking an occasional squirt from a bulbful of milk.

The mistake that Gibson had made, along with so many other writers back in the fifties and sixties, was the assumption that there would be no fundamental difference between ships of space and ships of the sea - or between the men who manned them.  There were parallels, it was true, but they were far outnumbered by the contrasts.  The reason was purely technical, and should have been foreseen, ut the popular writers of the mid-century had taken the lazy course and had tried to use the traditions of Herman Melville and Frank Dana in a medium for which they were grotesquely unfitted.

A ship of space was much more like a stratosphere liner than anything that had ever moved on the face of the ocean, and the technical training of its crew was at a much higher level even than that required in aviation.  A man like Norden had spent five years at college, three years in space, and another two back at college on advanced astronautical theory before qualifying for his present position...

Harlei:  If you'll allow me, Captain sir, let's swing right back, way back, beyond even the roisterers like Heinlein's 'Noisy' Rhysling, to a yet more primitive view of the spacelanes...

Zendexor:  You intrigue me.  More primitive than that story?  Must be really rough.

Harlei:  It is so, because space itself is primitive, in The Wreck of the Mars Adventure.

Captain Kidd feels strangely light as his ship leaves Earth; his learned crewman Dr Sexton explains, "'Tis nothing more than the reduction of gravitational attraction....  This phenomenon was predicted by Newton and confirmed by Halley on his first attempt to reach the Moon..." 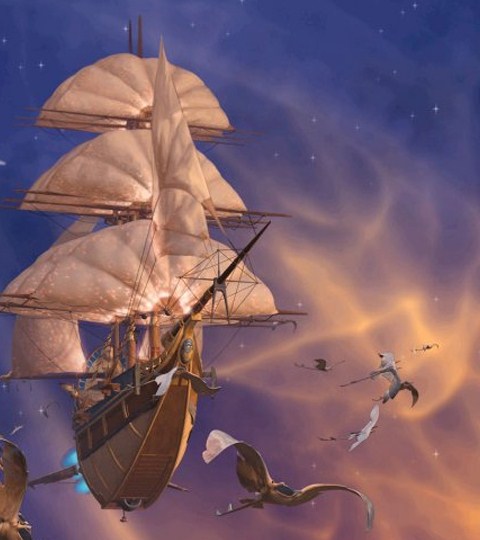 Harlei:  Yes - a New-Historical-Old-Solar-System tale, and in this one we have a reality which conforms to old, naive notions of space as being full of air.  Great fun.  Using interplanetary winds, you can sail ships from world to world...

Kidd... bounced on his toes and was astonished to find the small effort propelled him several inches into the air.

"Before the day is out," Sexton continued, "we will pass out of the Earth's demesne and into the interplanetary atmosphere...  That is the point at which we will be able to retire the balloons and continue with sails alone...

And so it proves.

"You call this 'a bit of turbulence'?" Kidd shouted in Sexton's ear.

The two men clung for their lives to the whipstaff that controlled the ship's great sail-like rudder.  Not only did it require the full extent of the two men's strength to keep the ship on course through the air, but only by clinging to the staff could they be certain they would not be blown overboard, to vanish immediately into the vastness of the air...

Kidd had never in his life felt so disoriented.  Storm clouds roiled in every direction; the compass spun crazily in its binnacle.  Even the basic, eternal verities of up and down had been left behind.  "How do we escape this chaos?" he asked Sexton.

"Watch for a bit of blue sky and steer toward it!"

See Scoring ruts through space for the literary advantages and disadvantages of the spacelanes.

For the sheer insouciance with which OSS pilots just "wing it", see a snippet from a 1940 tale, Trapped on Titan, on the Fictional Dates page under the year 2021.