the sands of mars by arthur c clarke

Clarke's The Sands of Mars is one of the select few classics of Martian adventure - and the sunniest and quietest of them.

Stid:  I foresee a struggle coming up.  You're going to have to explain why a reader should get excited by a "sunny, quiet" book.

Zendexor:  I can first of all bear witness to the fact: as a child, my first unsophisticated reaction to this book was one of sheer wonder and joy, and after innumerable re-readings since then, during the course of a long life, the joy has never palled.

Harlei:  Funny, the way things turn out.  I mean, The Sands of Mars doesn't seem to be much talked about, compared with 2001 - A Space Odyssey which is greatly inferior.

Stid:  What do you expect?  How can a mere book compare with book-plus-film?

Zendexor:  Whereas no film will every be made of The Sands of Mars.  It doesn't contain enough cinematic drama.  No moments of danger, except for one plane crash.

So, like Stid said, I'm in for a struggle - unless I can snatch at the secret formula which allowed Clarke to achieve this serene masterpiece. 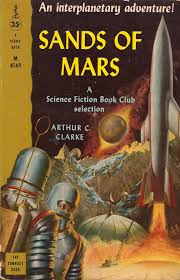 Stid:  Let me help you.  I can narrow the problem down a bit, I think.

By and large, in adventure stories, what we like to read about (desperate action, escapes, perils) is not usually what we would enjoy experiencing in real life.  Who'd want to go through what Gordon Holder has to go through in that epic of lone survival on Mars, No Man Friday?  Conversely, feelings we do like to experience - happiness, fulfilment, contentment, a sense of community, success - these things aren't the cliff-hanging stuff of literary adventure.

There - I've defined the achievement for you, Zendexor.  The next task is to explain it.  Over to you now.

Zendexor:  Thank you so much - actually, the more I think about it, the more I see that any good writer, even a writer of out-and-out thrillers, would do well to take the forward step, the advance past a certain skills threshold, which allows Clarke in The Sands of Mars to reverse the usual laws of drama. 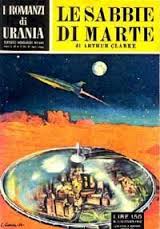 It certainly does no harm, in any book, to be able to portray life itself, daily life, as exciting.

Clarke has to do it more than most.  Think of what he's aiming for.  He wants to give us a journey to Mars, the maiden voyage of the first spaceship built for passenger traffic, and to show us life in a colony on Mars. That (he is telling us) is supposed to be exciting enough.

Certainly it would be exciting enough in real life, no doubt about that.  Just think if you the reader had an opportunity to experience a passenger trip to Mars for real.  You would want to enjoy the wonder of it all; you wouldn't want any blood-and-thunder disturbances to get in the way, would you?

And so it turns out in Clarke's fiction, too - the way he manages to get us to enjoy positive events in The Sands of Mars, through their own intrinsic fascination, we realize that blood-and-thunder would have spoiled the book, exactly as it would spoil a real Martian outing.

Stid:  That's all very well but you still haven't even hinted at HOW he does it.  I mean to say, the obvious trap remains - the ease with which it could have become a boring, over-technical travelogue.  Especially as there is quite a lot of tech stuff in it.

Zendexor:  Clarke meets this problem head-on and, I may add, he does it with quite a bit of humour.  One of the strengths of the book is the main character, Martin Gibson, a portly middle-aged writer of science-fiction stories; a man who has written plenty about space but who has never actually experienced it before.  The early chapters cleverly and amusingly show us him learning how reality can clash with his assumptions.

On the way up by shuttle to the space station, where he is due to board the Mars ship, Gibson at first passes out due to the acceleration, but feels fine when he comes to:

Psychologically, he had hit the bottom and bounced back.  It was a very unstable position, though he did not realize it...

Gibson felt a wonderful sense of exhilaration.  The moment he had waited for all his life had come.  He was in space!  It was too bad that he'd missed the take-off, but he'd gloss that part over when he wrote it up.

From a thousand kilometres away, Earth was still very large - and something of a disappointment.  The reason was quickly obvious.  He had seen so many hundreds of rocket photographs and films that the surprise had been spoilt: he knew exactly what to expect...

Then he has the disappointment of finding the starts less brilliant that he'd expected them to be.

...The dark glass of the port was to blame: in subduing the Sun, it had robbed the stars of all their glory.

Gibson felt a vague annoyance.  Only one thing had turned out quite as expected.  The sensation of floating in mid-air, of being able to propel oneself from wall to wall at the touch of a finger, was just as delightful as he had hoped - though the quarters were too cramped for any ambitious experiments.  Weightlessness was an enchanting, a fairy-like state, now that there were drugs to immobilize the balance-organs and space-sickness was a thing of the past.  He was glad of that.  How his heroes had suffered!  (His heroines, too, presumably, but one never mentioned that.)  He remembered Robin Blake's first flight, in the original version of Martian Dust.  When he'd written that, he had been heavily under the influence of D.H.Lawrence.  (It would be interesting, one day, to make a list of the authors who hadn't influenced him at one time or another.)

There was no doubt that Lawrence was magnificent at describing physical sensations, and quite deliberately Gibson had set out to defeat him on his own ground.  He had devoted a whole chapter to space-sickness, describing every symptom from the queasy premonitions that could sometimes be willed aside, the subterranean upheavals that even the most optimistic could no longer ignore, the volcanic cataclysms of the final stages, and the ultimate, merciful exhaustion.

The chapter had been a masterpiece of stark realism.  It was too bad that his publishers, with an eye on a squeamish "Book of the Month" club, had insisted on removing it.  He had put a lot of work into that chapter: while he was writing it, he had really lived those sensations.  Even now -

And so, Gibson's over-active imagination nullifies the work of the drugs and he makes himself space-sick.  After being told off by the space-station doctor he is told to

"...come along to the reception room and we'll get you a drink - a nice hot drink," he added, to prevent any misunderstanding.  "You can sit there and read the paper for half an hour before we decide what to do with you."

It seemed to Gibson that anticlimax was being piled on anticlimax...

Harlei:  That's how Clarke does it!  He turns it round!  I mean, he makes the story more instead of less exciting by all the detail with which he makes it so real, for instance these little humiliations and bumblings of the main character, so that when you read it you feel you're there -

Zendexor:  Yes, and having accomplished this, Clarke doesn't need to go on too long with the bumblings of Martin Gibson.  They do recur, now and then, but the author-astronaut gets used to things, as you or I (one hopes) would do, and by the end of the book Gibson is plausibly thinking of himself as a future chief executive of the Mars colony.  It's a fascinating progress.

Well, I hope I'm getting somewhere, with my attempt to explain why this book is so darned pleasant to read.  To sum up:

Clarke paradoxically quickens our interest by means of his character's petty disappointments, which serve to make us feel we are physically there with him, and therefore to feel the thrill of realism.  Having done that, he then escorts us into happier states of mind, as the character adjusts and learns and adapts.

He, and thus we, then are able to put disappointments behind us.  We've paid our dues, as it were; now we reap our reward.

As the passenger ship Ares finally sets out for Mars:

When Space Station One had vanished completely, Gibson went round to the day side of the ship to take some photographs of the receding Earth.  It was a huge, thin crescent when he first saw it, far too large for the eye to take in at a single glance.  As he watched, he could see that it was slowly waxing, for the Ares must make at least one more circuit before she could break away and spiral out towards Mars.  It would be a good hour before the Earth was appreciably smaller and in that time it would pass again from new to full.

Well, this is it, thought Gibson.  Down there is all my past life, and the lives of all my ancestors back to the first blob of jelly in the first primeval sea.  No colonist or explorer setting sail from his native land ever left so much behind as I am leaving now.  Down beneath those clouds lies the whole of human history: soon I shall be able to eclipse with my little finger what was, until a lifetime ago, all of Man's dominion and everything that his art had saved from time.

With such a book as this the reader gets the best of both mental worlds: the freshness of space-flight as something new, because the book was published in 1951 when writers were building up the old space program, and, combined with this, the remarkable realism which certain writers (perhaps Heinlein and Clarke most of all) were able to bring us a believable Space Age before its time had come. 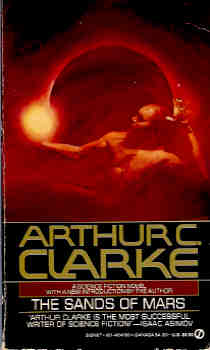 Harlei:  After all you've said about the detail and the realism replacing drama and danger as the source of excitement, I thought I'd better mention that some really big events do occur after Gibson's arrival on Mars.

He's there when the great discovery is made after the plane crash - I won't say what - and he also witnesses the successful start of Project Dawn.  Momentous events!

Zendexor:  I know, I know - but my point is, it's all equally a joy to read.  The big events are necessary to the story, but so are the countless little ones.

For Clarke's view of ancient Mars, see the page on primordial worlds.

For the novel's optimistic significance, see the OSS Diary for 30th November 2016.

› The Sands of Mars