what to see on
io 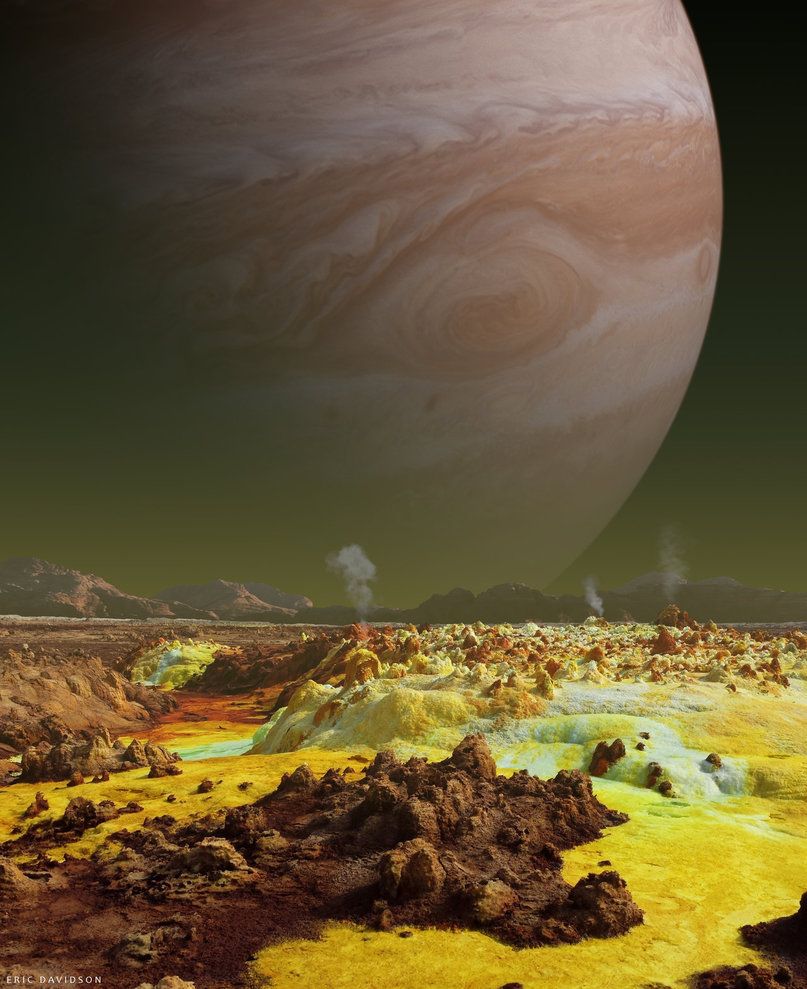 ...For hours and hours I walked down bas-relief-flanked passages, and through gloomy halls, searching for some sign of where that electric current was disappearing to; but long search by the light of my ato-flash revealed no trace of an answer.

It was there, in that dust and silence, and wreckage of quaint household fittings, that a definite wave of intense mental discomfort came over me.  It was as sudden as a hammer blow.  I hurried back to the surface, a vague suspicion in me becoming half conviction.  It was already late afternoon...

I expected to see, in the harsh, bluish twilight, only those dry irrigation trenches, and the twisted iron pillars that had supported the glass roofs of those hothouse fields, slashed long ago by infrequent meteor showers...

But - there was something else - collecting and forming against the picture of that dreary scene...

...Grant brushed his hand across his forehead and turned wearily towards his stone-bark log shack.  A pair of tiny, glittering red eyes caught his attention, and a slinker - Mus Sapiens - slipped his six-inch form across the threshold, bearing under his tiny, skinny arm what looked very much like Grant's clinical thermometer.

Grant yelled angrily at the creature, seized a stone, and flung it vainly.  At the edge of the brush, the slinker turned its ratlike, semihuman face toward him, squeaked its thin gibberish, shook a microscopic fist in manlike wrath, and vanished, its batlike cowl of skin fluttering like a cloak.  It looked, indeed, very much like a black rat wearing a cape...

a quietly sinister scene on io

"Well, here we are...  The first Earthmen to set foot alive on the Enchanted World!  I guess I got part of what I wanted anyway, didn't I?  But with what equipment we've got to keep alive with, we might just as well be buried with the RQ257!  Funny I'm not scared.  I guess I don't realize..."

His bitterly humorous tone faded away in vague awe.

Still lying prone the two men looked around them, at the hellish, utterly desolate scene.  The hills brooded there under the blue-black sky and tenuous, heatless sunshine.  A rock loomed up from a heap of sand.  It was a weathered monolith with weird carvings on it...  A curious pulpy shrub, ugly and weird, grew beside the monolith.  A scanty breath of breeze stirred up a little ripple of dust.

That and the stillness.  The stillness of a tomb.  Harwich could hear the muted rustle of the pulses in his head.  Everything here seemed to emphasize the plain facts.  The Forbidden Moon was a trap to them now.  A pit from which they could expect no rescue...

They had progressed not more than twenty paces into the dense undergrowth when the gleaming wall of the Tritu Anu was entirely hidden from view.  The artificial sunlight seeped through the mass of vegetation overhead, a ghostly green twilight that made death masks of their faces.  But of the lights themselves, of the great latticed columns, of the enormous sponge-like blossoms of the upper surface of the jungle sea, nothing could be seen.  They were deep in a tangled maze of translucent flora that was like nothing so much as a forest of giant seaweed transplanted from its natural element.  The moss-like carpet beneath their feet was slushy wet and condensed moisture rained steadily from the matted fronds and tendrils above.  The air they breathed was hot and stifling; laden with rank odors and curling mists that assailed throat and head passages with choking effect.

Weird whisperings there were from above and all about them.  It seemed almost that the uncanny, weaving green things were alive and voicing indignant protest over the intrusion of the three humans.

Ankle deep in the rain-soaked moss, their clothing drenched and steaming, they pressed ever deeper into the tangle.  All sense of direction was lost.

"How about this crystal thing - the searching ray?" Tommy ventured.

"It cannot follow us," the girl explained.  "Certain juices of the plants provide an insulator against the ray.  In fact, it was an extract of these that was used in protecting the underground laboratory we just left.  We are safe now and I am very tired."

Now there was this uprising on the first satellite of Jupiter: Io.   A charming little world.  A pleasant Earth-like orb, spinning quietly about its gigantic parent.  Up to this time, its natives had never been troublesome.  Squat, muscular creatures, more or less anthropoid, except for the fact that their complexions had a pale, greenish cast and their eyes were double-lidded like those of snakes.  They had an intelligence of .63 on the Solar Constant scale.  Within a century or two the Control Board meant to award them autonomy; toward this end educators had been working ever since Io had been removed from the British Imperial Protectorate in 2221.

Trouble had sprung, both literally and figuratively, like a bolt from the blue…