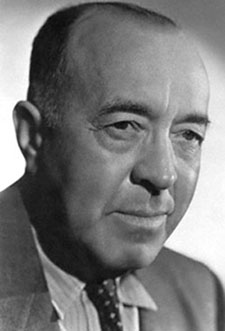 ERB was one of the most prolific, influential and enjoyable OSS authors.  He's more than just an unputdownable read.  His combination of virtues and faults make him a useful object of study - perhaps the most useful of all authors, if you're trying to get to grips with the mystery of story-telling - trying to isolate that elusive key factor...

(We have a go at sifting his secret on the Barsoom and Pellucidar pages.)

On Venus:  The Amtor series - Pirates of Venus, Lost on Venus, Carson of Venus, Escape on Venus.  Plus a late novella, The Wizard of Venus.

On the Earth:  The Pellucidar series.  The Tarzan series in 24 volumes.  The Caspak trilogy, The Land that Time Forgot, The People that Time Forgot, and Out of Time's Abyss.  Also a lost-race tale set in Cambodia, The Land of Hidden Men.  And the great novel of revolt against Lunarian domination, The Moon Men.

On Mars:  the Barsoom series.

On Jupiter:  Skeleton Men of Jupiter.

For ERB's style of writing see the OSS Diary for 26th August 2016 - with examples from Tarzan's Quest.

For ERB's consistency of standard, see the OSS Diary for 21st September 2016.

For some psychological depth in The Gods of Mars, see the Diary for 13th October 2016.

For an episode-comparison between Pirates of Venus and Rex Gordon's No Man Friday see Unexpected Survival at Planetfall.

For a more way-out comparison between ERB and Homer, see the OSS Diary for 30th December 2016.

For ERB and "excusology" see the Diary, Science Points the Way - Now Go and Play - with reference to Skeleton Men of Jupiter.

For "religion" in The Master Mind of Mars see The Worship of Tur.

For ERB and the virtues of "slow space travel", citing The Moon Maid,
see the Diary for 5th December 2016.

For more detail on the "moral contours" of Barsoom, and the contrast between that world and Amtor regarding arena combat, see the OSS Diary for 24th March 2017.

For comparisons between ERB's writing and Lin Carter's in the latter's pastiche Jandar series, see the Callisto page and Thanator - For and Against.

See I-Spy Jasoom for ways in which we might see our Earthly circumstances in a Burroughsian light.

For Tarzan and the City of Gold and ERB's authorial tone, see The Voices of Narrators.

See From 1520 to Barsoom for a stream of consciousness that leads from the Field of the Cloth of Gold to the sack of Zodanga.

ERB-related issues occupy much of the moral dimensions page.