Harlei:  Agreed - though in one sense I used to find it frustrating.

Took me a while to get used to this everlasting-day business...

Zendexor:  But you get used to it, and when you have got used to it you accept it as inevitable, part of the identity of the place, and thus part of its charm.

Harlei:  What I meant was, it's the consequences I found hard to take.

Pellucidar, the inner world, is lit by a mini-Sun at the Earth's centre - that's how the hollow inside of Earth can support life.  Fair enough.  But -

Because this "sun" can never rise or set, it's always day in Pellucidar. 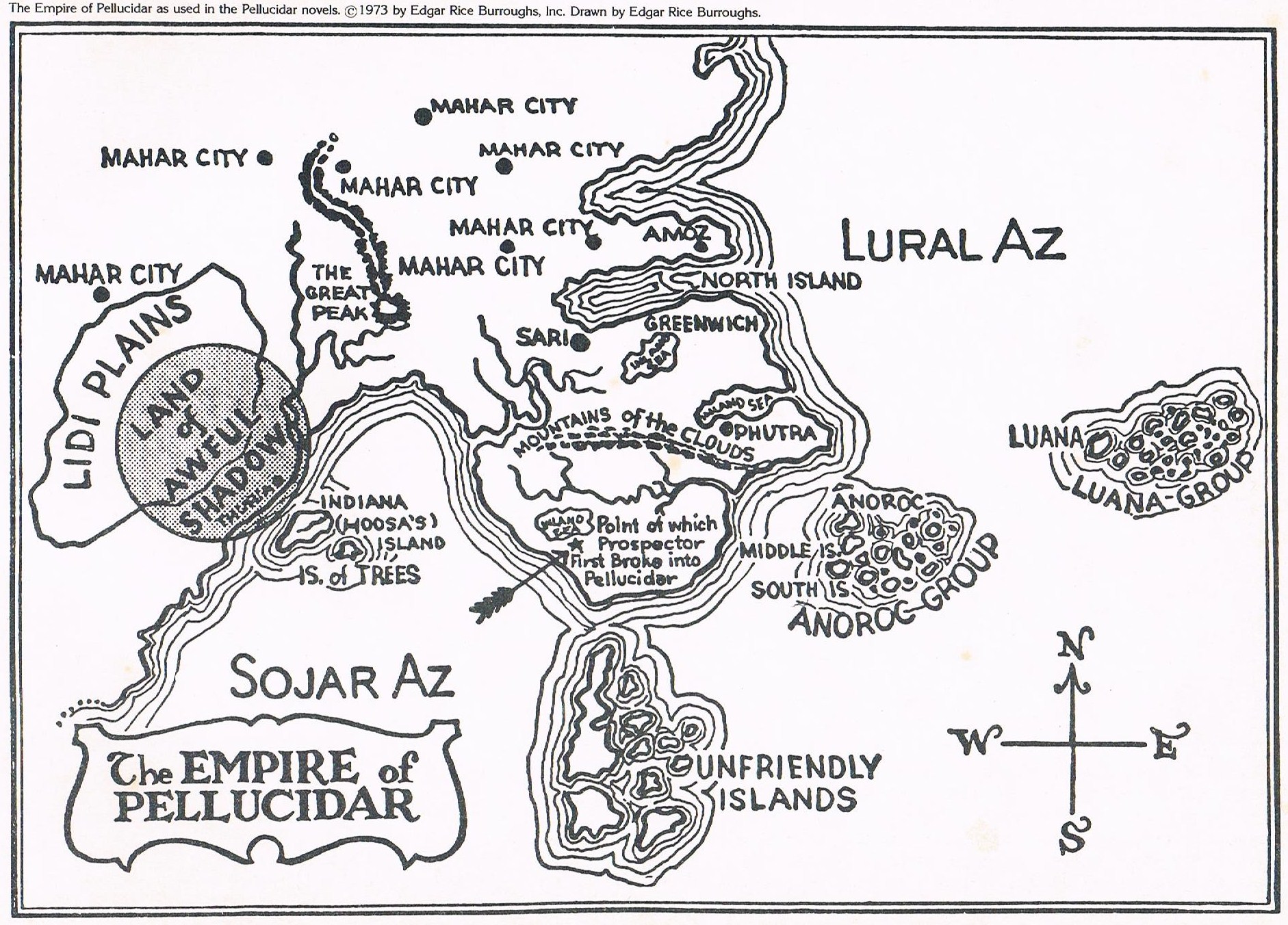 Harlei:  That's just a relatively small are of perpetual gloom in the shadow of a stationary orb floating above one point on the surface of Pellucidar.

Incidentally, in my opinion, Burroughs could have made more of this strange and intriguing shadow-circle.  Anyhow, my main point stands: Pellucidar by and large is in perpetual sunlight.

Well, you might say, there are pros and cons to this.  No romantic sunsets or inspiring sunrises, just as there are no stars in the sky... and if you're a captive, the business of escape poses problems when there's no cloak of night to creep off in.  On the other hand, the perpetual downpour of sunlight contributes to the lushness of the inner world, its inexhaustible blaze of colour. 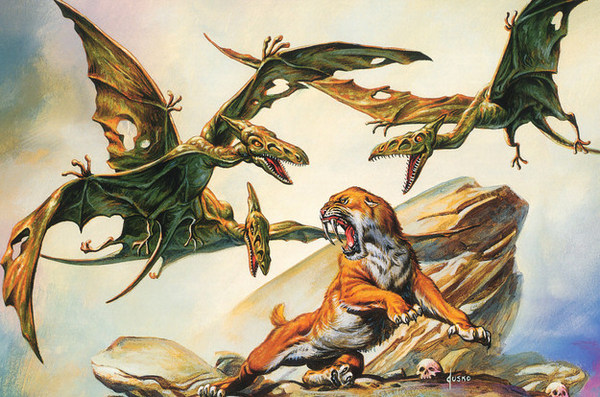 You feel, when reading - if you can call it reading when the book almost disappears and you virtually feel you are there - that it's fitting, in such a hothouse, that all eras of fauna can be jammed into one ecosystem, so that you get dinosaurs and cave bears, pterodactyls and sabre-toothed tigers, ravening about in the same world.

But the author goes further, in an amazing direction - blending physics and psychology - to reach a way-out conclusion.

Zendexor:  You mean, the non-existence of Time in Pellucidar.

Harlei:  Yes, or rather, its patchy existence.  Lack of a day/night cycle leads to some mind-boggling consequences - logical in a way, but bizarre.

Disparate events can't be co-ordinated.  People who meet after having been separated from each other find that time has meanwhile run at different speeds according to their individual perspective.

Folk don't appear to age in Pellucidar.  On the other hand, they do have to eat and sleep, and they tend to measure duration roughly in "sleeps".

These effects are brilliantly portrayed, and provide a haunting aspect of the Pellucidarians' mostly Stone-Age existence.

David Innes, the discoverer of the inner world, who becomes Emperor of Pellucidar, tries at first to introduce proper time-keeping to his people, but, in the words of his chronicler:

...they found that it put restrictions and limitations upon them that they never had felt before and they came to hate it and ignore it until David, in the goodness of his heart, issued an edict abolishing time in Pellucidar.

Lack of time, lack of history, lack of "progress" - the inner world is, as a result, peopled by savages - some noble, some not. 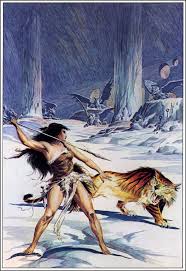 Harlei:  Until it got to me somehow!

Zendexor:  Right.  That's how it works, you see.  A great work of imagination will beat down objections to it, sooner or later.  Perhaps we'll catch glimpses of how it's done. 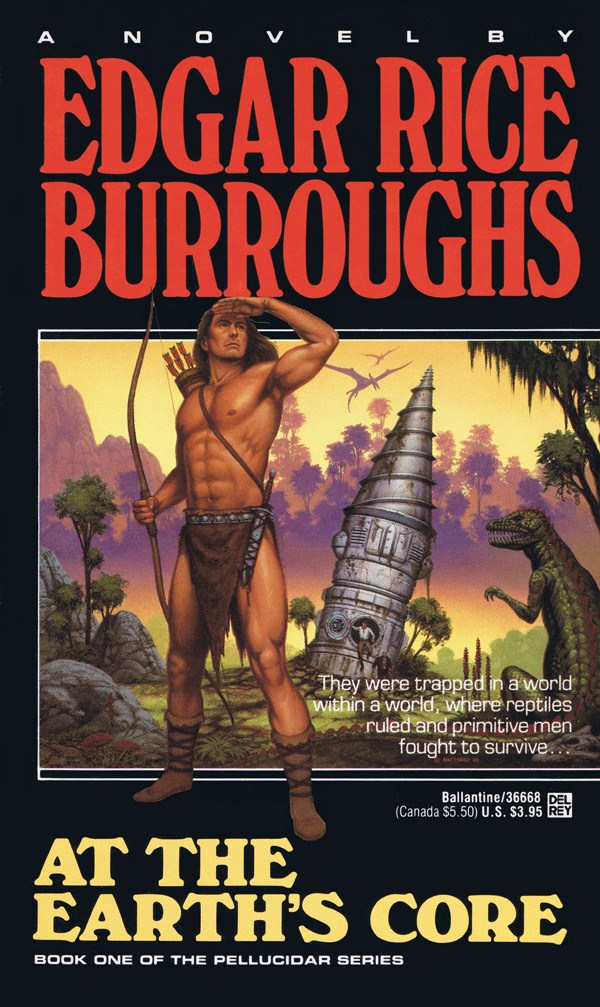 Mind you, I wouldn't say that David Innes completely fails to educate the Pellucidarians.  He does bring stuff in his Prospector machine from the outer world, and he brings his own knowledge and that of his inventor friend Abner Perry.  I'd say he has some effect, though we can have a long and interesting argument about whether it's more than marginal.  After all, he does defeat the Mahars - the oppressors of Pellucidar (and one of Burroughs' greatest alien creations).

You could compare that with John Carter's defeat of the therns on Barsoom.

And that brings me to say -

You mentioned the Barsoom series as having something - a planetary civilization - which Pellucidar lacks.  But now I want to mention something else, a particular asset which both the Barsoom and the Pellucidar series have to their credit, and which you won't find in Burroughs' other big world-building series, the four Venus (Amtor) books, excellent though they are.

(Perhaps the Amtor series would likewise have gained the asset I'm about to put my finger on, if it had continued a bit longer - perhaps four books was just not enough, for it takes that long for the hero to settle down.)

Can you guess the asset I'm referring to?

It's the particular enlargement that comes with a change of protagonist.

On Mars, Burroughs varies his heroes.  Wisely, he doesn't just stick all the time with John Carter. Carter leads in five out of the ten volumes; the other five adventures star five other heroes including three native Barsoomians, an Earthman and Carter's half-breed Barsoomian son.

In the seven volumes of the Pellucidar series, we're offered similarly welcome variety. 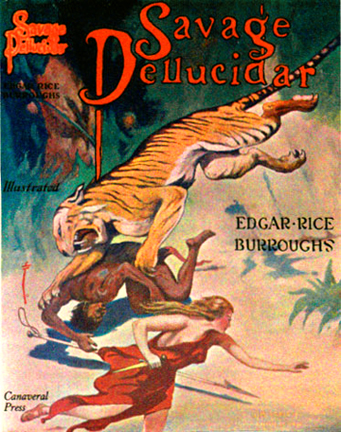 Moreover, though I said that Innes is central to the last two books, yet the last one of all - Savage Pellucidar - in fact has as additional hero and heroine a pair who steal the show from Innes: the warrior Hodon the Fleet One, and the mendacious cave-girl O-aa, by far the most fun character among Burroughs' female Pellucidarians.

For the moment I shall by-pass the fourth book, Tarzan at the Earth's Core, because of my disgust at the ape-man's dereliction of duty.  Having accepted leadership of the airship expedition to Pellucidar (via the Earth's north polar opening), what does he do but swing off alone on a hunting expedition the first chance he gets, whereupon he promptly falls into a trap, leaving his companions in the lurch.

It all comes right in the end, of course, but it definitely wasn't Tarzan's finest hour.

My two personal favourites, out of the whole series, are the third and fifth books.  I have read them countless times.

They are both imbued with the maximum lushness, colour and sheer raw blazing life of the sun-drenched inner world. 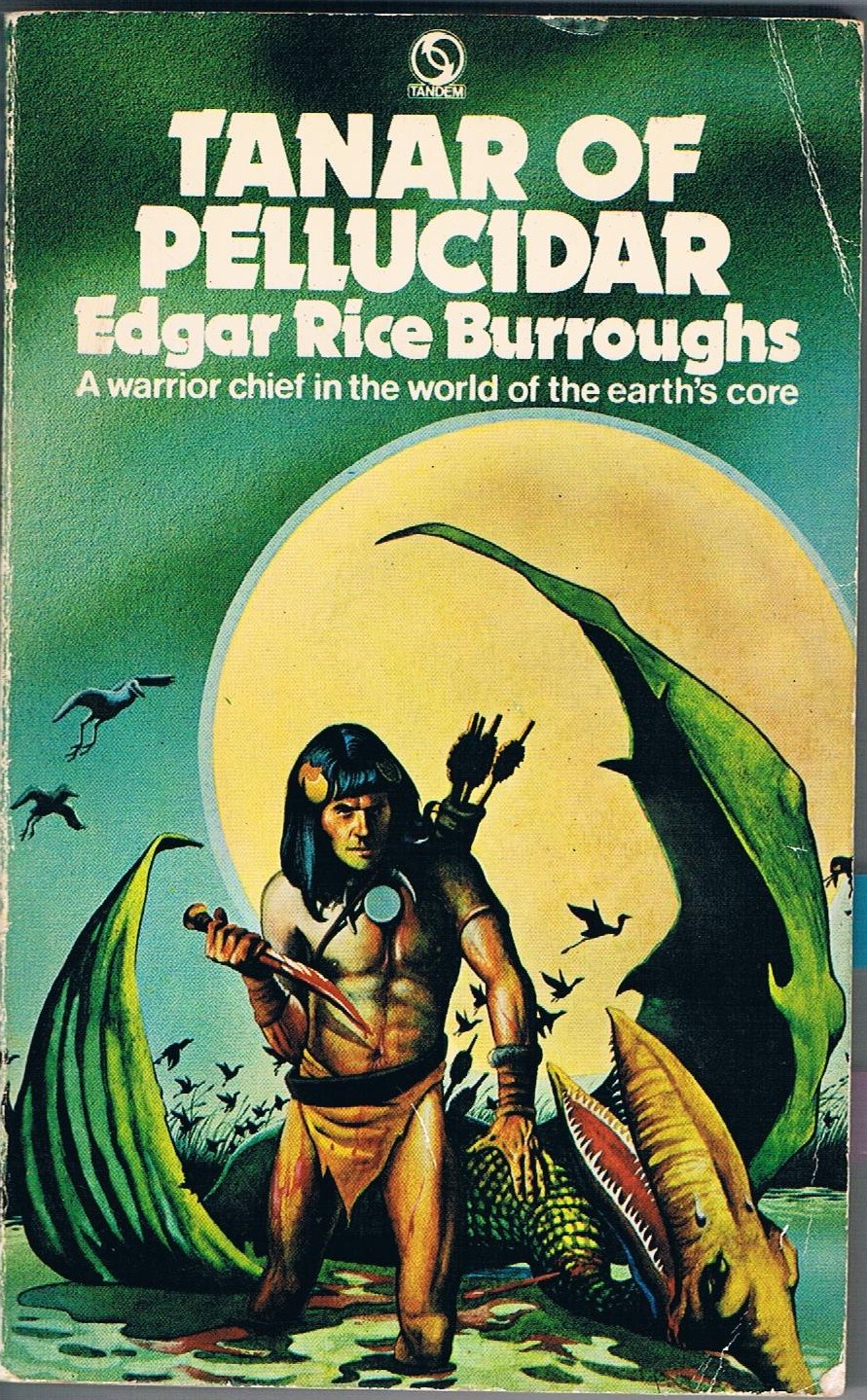 Tanar of Pellucidar is a rollicking adventure which introduces a new hero, a native Pellucidarian named Tanar, son of a chief in David Innes' empire; we also meet a splendid new set of villains, the Korsars.

Much more technologically advanced than the stone-age native Pellucidarians, the Korsars are obviously descended from pirates whose ships wandered through the polar opening from the outer world into the inner.  They possess firearms and a navy of huge sailing ships. The author exuberantly describes the ships and the men:

These ships rose to exaggerated heights at stern and bow, the sterns being built up in several stories, or housed decks, one atop another.  There was much carving in seemingly intricate designs everywhere above the water line and each ship carried at her prow a figurehead painted, like the balance of the ship, in gaudy colors - usually a life size or a heroic figure of a naked woman or a mermaid.

The men themselves were equally bizarre and colorful, wearing gay cloths about their heads, wide sashes of bright colors and huge boots with flapping tops - those that were not half naked and barefoot.

Besides their harquebuses they carried huge pistols and knives stuck in their belts and at their hips were cutlasses.  Altogether, with their bushy whiskers and fierce faces, they were at once a bad looking and a picturesque lot.

Stereotypical, of course, but in context a good example of how Burroughs can take a cliché and make it live.

The capture of David Innes, Emperor of Pellucidar, by the Korsars, leads to the plans for rescue embodied in the airship expedition which is described in the next book - the expedition led so incompetently by Tarzan.

David is rescued in the end, but some of the airship crew are missing, and one of them, the German ex-air-ace Von Horst, becomes the hero of the fifth book, Back to the Stone Age. 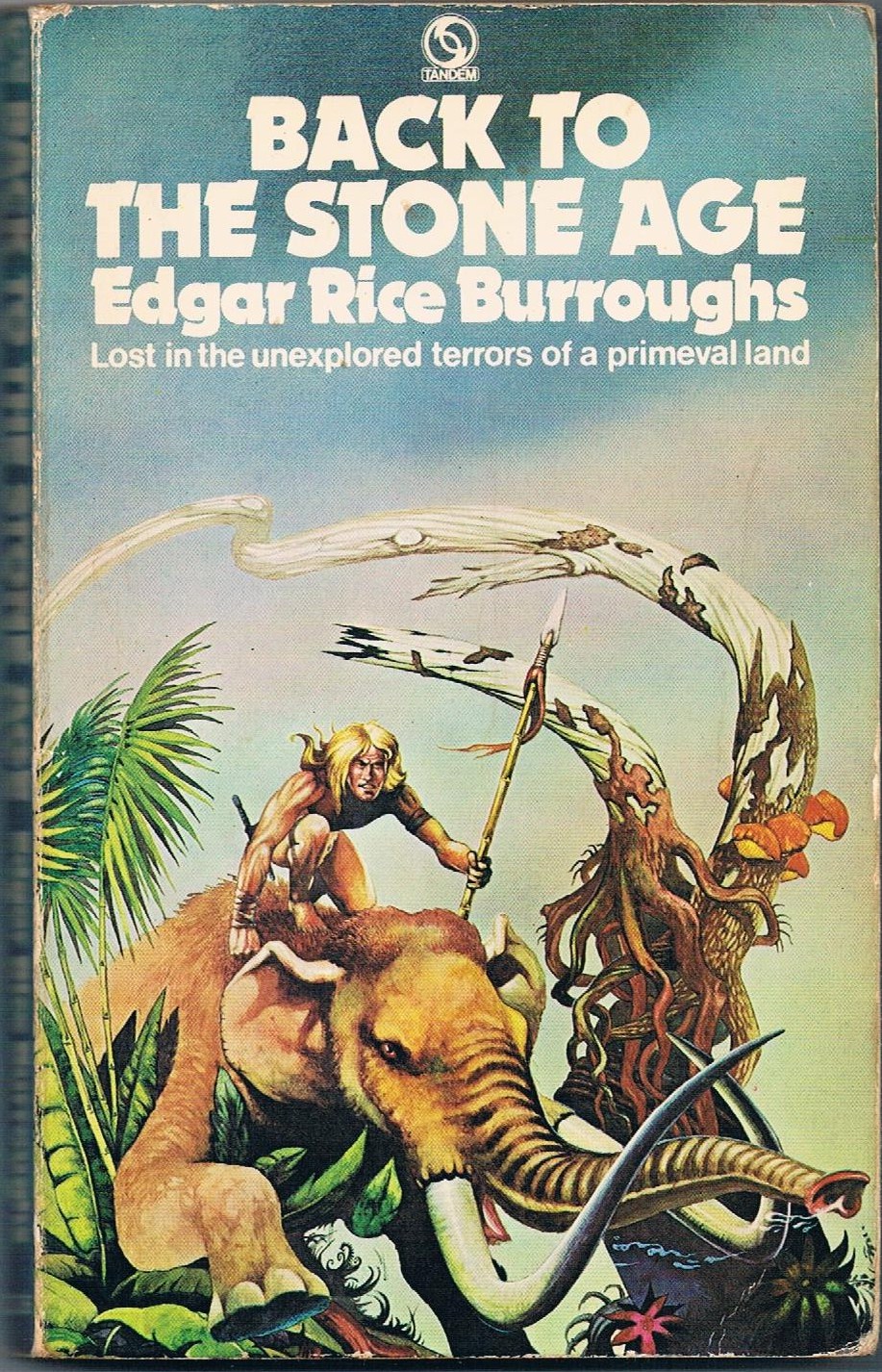 Stid:  Did you say German?

Zendexor:  Yes, believe it or not, Burroughs, who in Tarzan the Untamed (1920) had had his hero express "hatred of all things German", finally (seventeen years later) portrays a German hero, who in fact is one of his most likeable and well-drawn protagonists.

So, though it took a while, the author did in the end shake off the effects of Great War propaganda.

Von Horst, as I say, is one of the author's most likeable heroes, with a sense of humour that does not go down at all well with the literal-minded cave-girl La-Ja whom he befriends and who comes to love him in an exasperated sort of way.

"I never know when you are serious and when you are laughing with words," she said.  "If you will tell me when the things you say are supposed to be funny, perhaps I can laugh at them."

"Win what?" she demanded.

"My apology and my esteem - you have a sense of humour, even though you don't know it."

Harlei:  I like La-Ja; she's a good egg.  So is Dangar - von Horst's fellow-captive and first friend in the inner world.

Zendexor:  Plenty of good eggs in Pellucidar.  It's a savage and dangerous world, but splendid rather than sinister, apart from the macabre Coripies.

The Coripies are the exception which supports the rule: for those ghoulish folk live underground, away from what I feel like calling the cleansing effect of the perpetual sunlight of Pellucidar.

A decent Pellucidarian is brave, good-looking, and true to his/her word.  The men have an unfortunate tendency to assume that anyone who does not belong to their tribe is an enemy, but once you get over this - by showing solidarity in the face of peril - the stone-age savage becomes a loyal friend.

Stid:  Unless he's a baddie.  But you can usually tell them by their shifty look.

Zendexor:  As barbarians go, your average Pellucidarian is a cheerful specimen, not a moody misfit like Eric John Stark - and this is because the Pellucidarian barbarian is living in his natural environment.

I have quoted extensively from Tanar of Pellucidar in my page on ERB's sentence structure.

For the discovery-moment of breakout into the inner world, see Hollow Worlds.

For a "matter-universe" of hollow worlds englobed in cosmic solidity like holes in Gruyere cheese, see Man of the World.

Extract from Land of Terror: see Captured in a storm...