COMOLD is the theme, evident in many OSS tales, that the diverse human inhabitants of all the Solar System worlds share a common galactic origin.

Stid:  You sound sad when you say it.  What is it that you don't like about it?

Zendexor:  It is sad.  Disappointing, at any rate.  It clashes with the main merit of the OSS - the archetypal uniqueness of each Solar System planet.  Each planet, in my view, ought to have its own - its very own - originally evolved natives, to express its own special character. 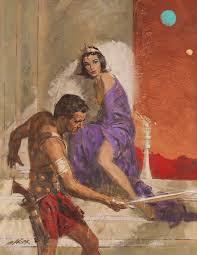 Stid:  But it often helps the story if those natives are human - gives the Earthman a beautiful Martian princess to rescue and so on - and that implies a common biological origin.  Hence the assumption that the Solar System was settled in the remote prehistoric past by a star-faring race who left settlers on all the worlds.

Zendexor:  No, no - it need not be explained that way!  Other scientific incantations could be uttered to help suspend disbelief for the sake of those stories which require - for example - Martian humans.

For instance, you could say there's something in the Sun's rays which encourages human evolution.  (There's a hint to this effect in Dreadful Sanctuary.)  This would be one cause of convergent evolution - a good old standby for those who need human-shaped people in their stories.  More generally, convergent evolution can be either scientifically justified (but then it can only converge in superficial form, as in Niven's Eye of an Octopus), or more metaphysical, teleological, as in Uranian Gleams where we are told about the origin of the Nenns (the humans of Uranus) in their prebiotic lake of Dmara, 1.2 million years ago.  As we see on this version of Uranus and on the same author's version of Mercury, the metaphysical/teleological type of convergent evolution can create people as close to our physical form as the author pleases.  We are not given the precise manner of origin of the Mercurian humans in Valeddom, but it is stated that they were evolved on that world, so they must belong to it as the Uranians do to theirs. 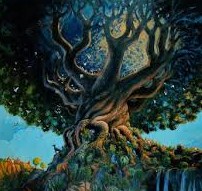 Convergent evolution can likewise be the label we apply as an excuse for Burroughs' human Martians, Venusians, Jovians and Lunarians - though he doesn't bother to find words for it; he just gives us the fact that the Barsoomian humans originated on a physical "Tree of Life" in the Valley Dor, at the south pole of Mars, twenty-three million years ago.

Zendexor:  Hear, hear.  Burroughs lets all his OSS peoples be themselves.

Stid:  I can tell that this autarky is part of your personality, Zendexor.  Your dislike of COMOLD reminds me of your dislike of the theory that the Moon was once part of the Earth.  Things ought to be themselves alone.  A sort of cosmic Sinn Fein.

Zendexor:  I don't know whether your tongue's in your cheek, Stid, but what you're saying is true.

Harlei:  You know, Zendexor, you needn't look at things this way.  Common origin need not rule out separate destinies.  The true character, the unique Martian or Venusian personality (or whatever), can emerge increasingly with time, instead of having been provided from the beginning by a separate origin.  The peoples of the OSS can grow out towards their destinies.

Zendexor:  You argued that way over the Moon-origin business, as I recall.  And my answer's the same:

I use your teleological approach when I have to, so as to be able to enjoy Leigh Brackett's tales, for instance.  I say to myself, after millions of years of separate existence, Mars humans certainly have gone native.  Adapted to their world, they do become culturally unique.

It's not the same, though, as reading about real Martians.

More satisfyingly, I give stories the benefit of the doubt wherever I can, inserting my own convergent-evolutionary explanations.  For instance, the Grelvi, the nine-foot-tall humanoid Venusians in Men of the Morning Star - are they real Venusians or not?  They may be.

And although most of the humans in Captain Future's Solar System share an ultimate galactic origin, I can hope that this does not apply to the ancient machine-masters of Mars, who are said in Galaxy Mission (page 36) to be "cold-blooded" - a sufficient difference, perhaps, to point to a separate origin? 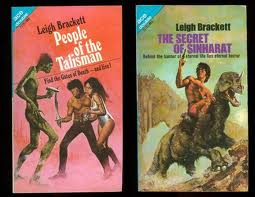 Harlei:  And to get back to Leigh Brackett's Old Solar System: I wonder if you can find counter-clues there, to point the way you want, away from her statement on page 8 of The Secret of Sinharat:

Earth's sister worlds... had their peoples, descendants of some parent human stock that long ago had seeded the whole System.

Zendexor:  I have indeed found one clue to set against that - as you know very well, because I've been trumpeting it gleefully to all who will listen.

Here it is, the speech from page 115 of People of the Talisman - the words of the non-human Martian in the nameless city beyond Kushat (of which I underline the key message):

"...We were a great city, then.  All this valley was warm and prosperous...  We are the oldest race on Mars.  We knew you before you walked erect.  We built our cities when you lived in holes in the rock and barely understood fire."

Now, does that not suggest pretty conclusively that the Martian humans evolved on Mars?  Before they walked erect...

Stid:  Sorry, Zendexor, but it just means that COMOLD works the other way and the other worlds were seeded by Martian humans long ago, perhaps in the age of the Quiru...

For an attempt to argue round COMOLD and salvage Edmond Hamilton's Moon of the Unforgotten, see the Diary entry, False Trail to Europa.