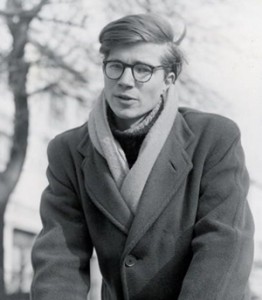 An intellectual, Wilson is nobly obsessed with the idea that human consciousness needs to be yanked up to a higher level, yet he expresses this belief in a down-to-earth, practical manner.  As a writer he's not primarily a science-fiction author - in fact he's a bit of a dabbler, but his stuff is worth an sf reader's time for its ideas and plots, and he can evoke the sense of wonder in a true SF enthusiast.  As for his contribution to the OSS - it's not vast, but what there is of it is worth a mention.

Stid: A dabbler, all right!  Listen to this:

...They had found a spacecraft that was clearly not from Earth.  They had therefore established beyond question that there was intelligent life in other galaxies...
[The Space Vampires, page 3]

You see?  One of those stupes who doesn't even know what a galaxy is.

Zendexor:  It certainly is weird, the way the word "galaxy" gets so often  misused by so many people.  But look a bit further on in Wilson's book and you'll find:

"...We know these creatures aren't from within the solar system.  So they're from another system, perhaps another galaxy."

"Impossible, unless they've been travelling for a hundred million years or so."
[The Space Vampires, page 14]

Stid:  Hmm... so what he forgets on page 3, he remembers on page 14.  He could have done with a better editor.  Or maybe his problem was, he didn't understand how big the size and stellar population of our own Galaxy is.  If he had grasped that, he would not have needed to consider other galaxies at all.  Such lack of a sense of proportion is the mark of an amateur.

Zendexor:  Better not say that, as half the great OSS authors we've been dealing with have a similar lack when it comes to magnitudes and ratios.  Think of ERB's crazy mathematics in Swords of Mars -

I knew that the diameter of Thuria was supposed to be about seven miles, so that its volume could only be about two per cent of that of, let us say, the Earth...

More like one ten-millionth of a per cent, he should have said, surely!  Never mind.  Maths wasn't John Carter's strong point.  What matters, is whether an author gets right those things which his theme demands he get right.  The essentials. 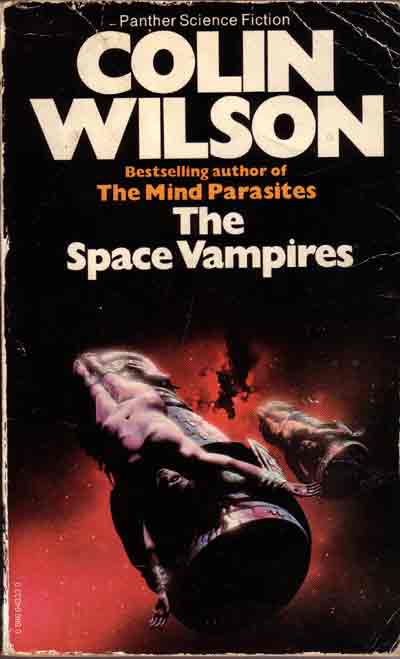 Stid:  But to get things in proportion is an essential. Wilson in the early pages of The Space Vampires makes some curious understatements which cause the reader to pull up short and scratch his head and say, Uh?

For example, one of the spacemen who discover the derelict alien ship - a ship fifty miles in diameter - says, "it could be the greatest scientific discovery of the twenty-first century".  Could  be?  Isn't he sure?  All right, the century's not over yet, so logically he couldn't be sure, but wouldn't someone in that position be likely to express himself more strongly?  Again, a few pages later, comes a vast understatement:  "This find was more important than a dozen unknown asteroids."  It's enough to deaden the book.

Zendexor:  Please - we'll be putting the readers off.  Note that your strictures apply only to the first dozen or so pages of The Space Vampires.  It soon picks up.  And my verdict on the book as a whole, is that it's carried along successfully by Wilson's intelligent development of the energy-vampire theme.  It's a good story, with thought-provoking ideas that outweigh the book's creaky start.  I was interested to get a new slant on Count Magnus, the M R James story which just about scared the life out of me when I first read it.

Incidentally, the film Lifeforce, based on The Space Vampires, is good enough if you can settle for something that echoes the theme rather than actually stays faithful to the book's plot.  Worth seeing, in my opinion, though Colin Wilson himself didn't agree.

Let me also add, that I often find Wilson's writing bracing and liberating to read.  He's blunt and without any stylistic graces - he reminds me of Fred Hoyle in that respect - but his plots and his ideas can wow me.

Probably my favourite is The Philosopher's Stone, the chunkiest, most solid of the three novels.  I forgive his adherence to cranky moon-theories, his scientific howlers which are apt to appear suddenly amid a solemn procession of sober reflections - 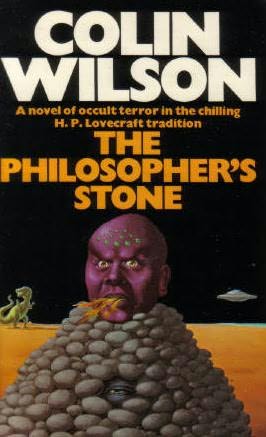 I was fascinated by Wendell Stanley's experiments in which he transformed a virus into a non-living crystal, and showed that it could still cause disease, for they obviously opened up the question of the dividing line between living and non-living matter.  Lyell kept me up to date on the researches of Watson and Crick into DNA.  And both us us became excited about Stanley L. Miller's demonstration that organic compounds can form spontaneously under conditions that parallel those of the earth of eighteen thousand million years ago...

Yes, eighteen thousand million years.  Where he got that figure from - a stretch of time several billion years longer than the age of the universe - I can't imagine.

The point is, the occasional howler is not enough to shake one's confidence in what he does know how to present.  He knows very well how to weave a tale from a combination of tones: hard scientific approach plus occult strands; a striving after a greater consciousness, a quest to uncover hidden truths about man's origins and status, and a dangerous connection to the Lovecraftian mythos of the Great Old Ones.

Mercury gets pulled seven million miles closer to the Sun, we are told in a brief reference in The Mind Parasites.

Earth has its remote past history explored in a Lovecraft connection, in The Philosopher's Stone.  In particular we are given a description of the civilization of Mu, the legendary lost continent of the Pacific.

The Moon is the abode of a secret spiritual evil in The Mind Parasites.

Mars is mentioned briefly in The Space Vampires as "inhabited by a race of humanoid giants, who were learning to build cities" - until the disaster which exploded the asteroid-progenitor planet and which presumably also had a catastrophic effect on Mars, no doubt bombarding the place with impactors.

The asteroid progenitor planet is named in The Space Vampires.  The vampire-hunters explain:

"In our language, it was called Yllednis, the blue planet.  When we had last visited your solar system, Yllednis was the home of a great and ancient civilization of creatures like ourselves - intelligent molluscs..."

For more on The Mind Parasites see the OSS Diary, 23rd February 2017, about the solar life trapped in the Moon.