The idea that the asteroids were formed when a planet broke up is an outdated scientific notion, which became one of the great plot-elements of the Old Solar System. 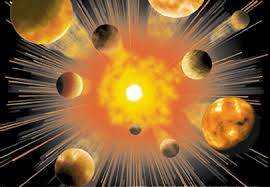 It often bears the dire moral message, that the destruction of that planet was brought about by its inhabitants themselves.

Stid:  Reminds me of tales about Atlantis.

Zendexor:  Very much so.  In more ways than one, the Progenitor Planet is the Atlantis of the Solar System.

The date of the destruction varies widely.  In Space Cadet it's said to have happened "nearly half a billion years ago" whereas in Inherit the Stars it happened ten thousand times more recently, that is, a mere 50,000 years ago....

Stid:  Never mind the precise date; what was that world like?  Apart from a bit chilly, of course.  Way out beyond Mars... but in addition to that, what can you say? 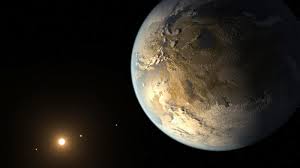 Zendexor:  As usual you are challenging me to find a thread that runs through all depictions of the planet's character.

A tall order.  Especially for a world that never actually existed outside the pages of fiction...  but the challenge isn't quite impossible.

After all, fiction is what we're concerned with here.  And it can acquire its own threads of tradition...

Stid:  But even the same writer can give us contradictory accounts.

Zendexor:  You're thinking of Clark Ashton Smith, no doubt.  Yes, his two fragments, Ascharia and The Master of Destruction, both portray the Progenitor Planet, but differently.

Ascharia (the Lemurian name for the planet - sometimes given as "Asharia") is narrated by a Lemurian space voyager named Hespire, who tells of

...the planet that disappeared from the heavens only a decade agone, flaring like a young sun ere it died out on the constellated darkness.  Voyagers between Mhuth and Mhaggalok have found its far-scattered fragments; and the largest of these whirling planetoids have been named, and their orbits charted.  But neither space-explorers nor astronomers have learned the true cause of the destruction of Asharia.  And though there are vague myths that the forbears of man came primordially to Earth from Asharia, it is doubtful if that world was ever trodden by human feet other than those of my companions and me.

Ascharia is a planet with synchronous rotation and a Twilight Belt, like Old Solar System Mercury.  Hespire finds plenty of action there.  His adventures include being abducted in the pouch of a marsupial monster, and finding assistance from a colossal marching statue haunted by a mysterious feminine presence.

But strenuous though it is, the place is quite relaxing and uneventful compared with life on Antanôk, the version of the Progenitor Planet in The Master of Destruction.

Ascharia and Antanôk bear no resemblance to each other.  No mention of synchronous rotation, marsupial monsters or walking statues in The Master of Destruction.  Instead we have a world war between humanoids and avians, ending in the destruction of Antanôk.  To judge from the synopsis, the story would have been quite an epic, had Smith gone ahead with it.

Stid:  So in your attempt to find a common theme you're an absolute failure so far.

Zendexor:  But as General Turgidson says in Dr Strangelove, let's not judge before all the facts are in.  You never know, the two Smith fragments might portray the Progenitor at widely differing points in its history -

Zendexor:  All right, all right, but let me just say that I can link the denouement of The Master of Destruction to other tales.  Specifically, to other accounts of Progenitor Planetary destruction or suicide, such as that of Yllednis in The Space Vampires and that of Minerva in Inherit the Stars.

That is to say, it's all "planeticide".  (In differing circumstances, of course.)

Stid:  Don't forget this site is supposed to explore our ideas about the planets before the age of space probes.  You might as well not mention Inherit the Stars, then, as far as the Old Solar System is concerned, because the book was published well into the Space Age - in 1977 - and it's certainly not "retro"; it's thoroughly realistic, hard SF.

Zendexor:  Except for one major aspect - the idea of the Progenitor Planet itself!

That is an OSS notion.  It's no longer considered scientific.  And I doubt whether it was scientific even back in 1977.  It's quite a while since the asteroids were thought to be the remnants of an exploded planet.  Nowadays scientists all seem to agree that asteroids are unused rubble left over from planet formation.  Rock that never achieved planet size.

So I do regard Inherit the Stars as "retro" in that department.  Sure, the author gives some scientific excuse - he talks of cosmic-ray exposure times and orbit statistics - but basically he is making a contary-to-fact assumption, that the Progenitor Planet existed. 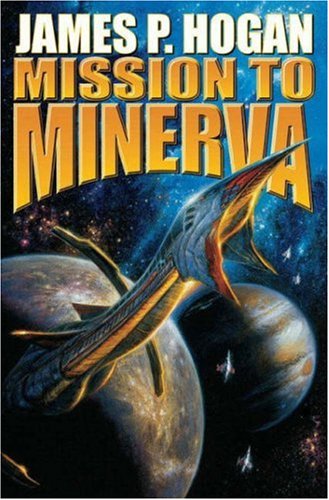 Harlei:  Hooray!  I'm glad you're including that book as a talking point in our site.  It's a riveting tale, full of detective excitement. The mystery-solving plot, the apparently conflicting evidence, the rival investigators, kept me turning the pages till all was revealed about the fate of the planet Minerva and its survivors.  (And he resurrects that world in a later novel.)

Zendexor:  And he makes the idea of an inhabited planet between Mars and Jupiter believable, although it's so far from the Sun. Hogan's prose is often clunky, but he does bring Minerva to life.

It was a world with a thin crust and therefore much volcanism.  This helped to ensure enough carbon dioxide in the atmosphere, to create a greenhouse effect to conserve heat.  Even so, the place only just managed to be warm enough, at its distance of 250,000,000 miles from the Sun; a zone around the planet's equator was habitable, but the rest was iced over.

Humans come to know all this, plus the history and language of the Minervans, because of archaeological discoveries on Earth's Moon, where space-faring Minervans had left traces... and as for why such traces were found on the Moon and not on Earth, well, there's a reason... an ingenious reason, but I won't spoil the book for you.

Harlei:  It's not spoiling things to say that the heated debates in the book concern where the ancient Minervan humans could have come from - Earth, or Minerva itself.  But remember, this is one book where you don't have to make the COMOLD complaint, Zendexor!  For whatever the outcome of the debate about the ultimate origin of humans from Minerva, there turn out to be some intelligent non-human Minervans, too.

And I have another helpful comment to make, if you'll bear with me while I return to the fragment you cited earlier, Ascharia.  You were getting a bit stressed while looking for links, because of the stark differences between that fragment and Smith's other one, The Master of Destruction.  But though we cannot link them to each other directly, we can now tie both in with Inherit the Stars, as follows:  The Master of Destruction because it tells of the fate of the Lost Planet, and Ascharia because of the human-origins debate:

And though there are vague myths that the forbears of man came primordially to Earth from Asharia, it is doubtful if that world was ever trodden by human feet other than those of my companions and me.

True or false, it's not surprising that there should have been such myths, if there had been a Lost Planet and a populated Old Solar System. 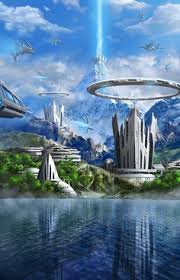 the vision of northwest smith

Now to take one further step towards grasping some archetypal vision of the Lost Planet, let me add another fragment, this time from the chronicler of the interplanetary outlaw Northwest Smith, who sees into the past in Dust of the Gods...

Stid:  Just sees into the past?  Doesn't visit it?

Harlei:  I'm afraid so.  Would it were a real time-travel tale, or a set-in-the-past tale which allows us on a real narrative visit to the doomed world, or even mind-travel by which the same character visits our ancient inhabited moon in a different story.  But what we do have in Dust of the Gods is a passage which embodies the asteroid-progenitor-planet myth as it has developed so far.

...the reflections wavered and ran together until he seemed to be suspended in a space while all about him pictures of flame went writhing through the dark - pictures of flame - nebulous, unreal pictures waving across the walls and vanishing - flashing by uncertainly overhead, running under his feet, circling him round from wall to wall in reeling patterns, as if reflections made eons ago on another world had buried deep in the crystal...

With the smoke eddying dizzily in his nostrils he watched - and all about him, overhead, underfoot, the strange, wild pictures ran blurrily through the crystal and vanished.  He thought he saw mighty landscapes ringed by such mountains as none of today's world know... he thought he saw a whiter sun than has shone for eons, lighting a land where rivers thundered between green banks... thought he saw many moons parading across a purple night wherein shone constellations that haunted him with familiarity in the midst of their strangeness... saw a green star where red Mars should be, and a far pin-prick of white where the green point that is Earth hangs.  Cities reeled past across the crystal darkness in shapes stranger than any that history records.  Peaks and spires and angled domes towered high and shining under the hot white sun - strange ships riding the airways...  He saw battles - weapons that have no names today blasting the tall towers into ruins, wiping great smears of blood across the crystal - saw triumphant marches where creatures that might have been the forerunners of men paraded in a blaze of color through shining streets... strange, sinuous creatures, half seen, that were men, yet not men...  Nebulously the history of a dead and forgotten world flared by him in the dark.

Harlei:  Just suppose, for the sake of argument, there really was a Progenitor Planet with and advanced civilization and that planet really did blow up, could we really find surviving fragments of its culture?

Zendexor:  For a surprisingly convincing "yes" to this, I refer you to Prodigal's Aura.  I don't know if it's scientifically valid, but to me at least it isn't ridiculous.

Stid:  Not that you'd worry overmuch if it were.

Zendexor:  Depends on the tone.  The right tone can help an author get away with anything.  But good ideas help too.  Here is the ne'er-do-well in Gallun's tale, the returned spaceman regaling his relatives with pics of the things he's seen on the asteroids:

Part of the surface of one showed rows - like an unplowed cornfield in late autumn.  There was even some kind of stubble, blackened and charred by the dehydration that had to go on in space.

"You've all heard about things like this," August Larsen explained, looking like an old Viking after a long voyage.  "Part of the surface of the original planet, preserved for millions of years after the explosion.  It must have happened very quickly.  The flash of terrible heat was too brief to cause as much destruction of small things as you might think.  The atmosphere of the planet dissipated into space at once.  So everything was kept in a vacuum.  There's even an old village in the background of this picture.  And bodies have been found - dried and mummified by space.  Not human, of course.  Blackened and crumpled up..."

For a possible "slow breakup" allowing various cultures to survive, see Digging for plots among the asteroids.