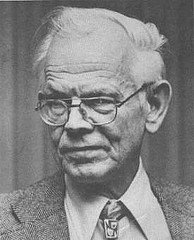 A classic, thoughtful writer of the Golden Age, Gallun is hard to compare.  The haunting splendour of his best work is comparable to that of van Vogt, though perhaps more reflective.  Anyhow, Gallun's contribution to the OSS is greater than van Vogt's because of the greater number of important OSS stories which Gallun has left us.

Harlei:  I'd especially recommend Seeds of the Dusk and Old Faithful.

Zendexor:  I'm going to read those two again, certainly, but the same goes for quite a few of the others, even the unwieldy Passport to Jupiter which I found a bit heavy going...  it's nevertheless a powerful tale, one which I want to like.  That "wanting to like" the second-rank tales is generated by those first-rank Gallun stories which require no effort to like: above all, Seeds of the Dusk.

That, in my opinion, is his best story.  The best of many good ones (and indeed one of my all-time favourite science fiction stories), it is one of the few important attempts to portray intelligent plants, and it sheds an unforgettable light on both the far future Earth and the far future Mars.

matching the worlds to the stories

Mercury:  Passport to Jupiter (some scenes)

Mars:  Old Faithful; Seeds of the Dusk; Return of a Legend;
Passport to Jupiter (some references)

Io:  The Lotus Engine  and Invaders of the Forbidden Moon

Ganymede:  Passport to Jupiter plus some references in Derelict.

For the "go for broke" attitude of Old Faithful, see Safety Last.

For a reference to an elf-like Mercurian in Derelict, see the CLUFFS page.
And for more on that story see the section "Hulks of the Void" in
Space Sargassoes, Derelicts and Clumps.

Red Planet colonists "going native" are discussed in The New Martians, regarding Gallun's 1952 tale, Return of a Legend.

The Diary entry Dark-Bright Thoughts on the Asteroids discusses Prodigal's Aura alongside Simak's Time And Again.