This page is a work in progress.  To a greater extent than elsewhere on the site, I am hoping for information sent in by the readers, since the dearth of material on Ceres is unusually severe, when set against the importance of this particular world.

Harlei:  Yes, it's about time Ceres had her page!  This asteroid was after all counted as a planet - the eighth major planet - in 1801 when it was first discovered!  (For that matter, Pallas, discovered the following year, was counted as the ninth.  It was a few decades before the term "asteroid" or "minor planet" was brought in.)

Stid:  And you're out to show that there's still something major about it.  Well, this century it has been promoted - as Pluto was demoted - to "dwarf planet".

Harlei:  Never mind that "dwarf planet" stuff: "largest asteroid" is what's traditional and, therefore, I'm sticking with that.  What we need now are some Cerean adventures with a proper Cerean flavour.

Zendexor:  Unfortunately it's not going to be easy to provide what you Cereophiles want.

Here's an example of the pittance we tend to get doled out by authors:

...They stepped down into the thin atmosphere of Ceres' depths.  Ships of all sizes and designs rested there in the vast hollow; for this was an outlaw base for pirates of all planets.  They came as they pleased, setting down for a few weeks or months, then leaving for places unknown and unasked.  Not one man in a million knew of this place.  Certainly the Tri-Planet Patrol didn't.

Zendexor:  Don't get your hopes up.  This is the sort of thing we go on to visit:

They walked toward the single sprawling street of Ceres Base.  Sounds of revelry reached them, guttural laughter and curses and the click of gambling wheels.  Once they saw a thin, blue flash of an electro-pistol.  That was the only law here, and life was cheap among these cutthroat pirates.

They entered a place that seemed the largest and noisiest in the town...

Stid:  You needn't go on; we get the point.  A space-western, no more.

Zendexor:  Harlei and I don't necessarily turn up our noses at space-westerns, provided they're sufficiently flavoured with an appropriately exotic setting; but I don't think this one is. 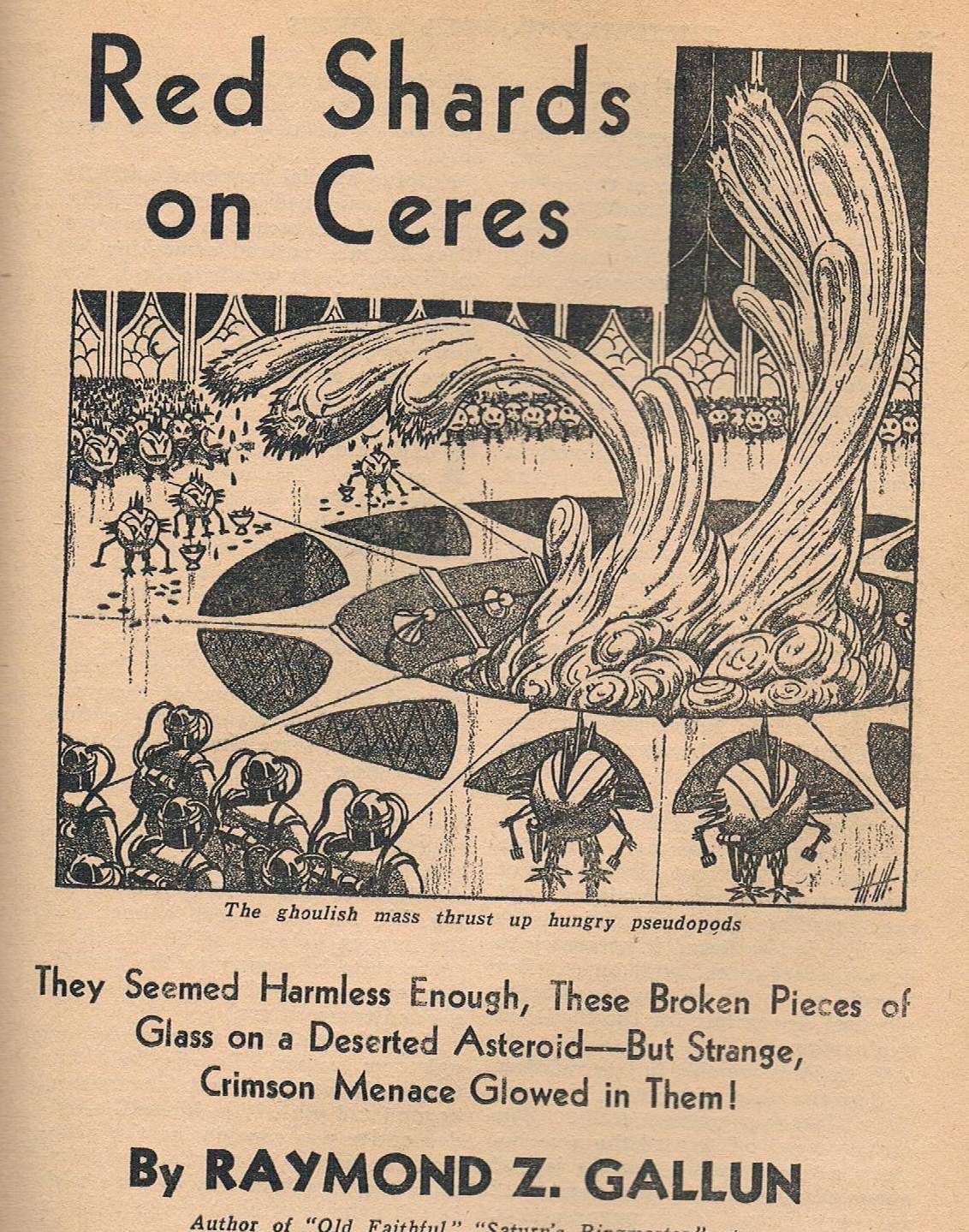 Stid:  It certainly isn't, and to be frank, Zendexor, I'm surprised you started with it.  It would have made a better impression if you had gone straight into discussing the one Ceres story worthy of the name.

Zendexor:  I wasn't holding back my conclusions just for dramatic effect.  Fact is, I'm also disappointed by Red Shards on Ceres.  I'm not denying that it's a good tale, worth reading, and I don't want to spoil it.

The second portal swung inward.  Brilliant light, like that of the sun, stabbed by as it moved.  Automatically the members of the Farnsworth Expedition entered the tremendous cavern beyond it.

Far up toward its roof an incandescent sphere shone brilliantly, giving abundant artificial light to this strange place.  The floor of the cavern was covered with odd, luxuriant vegetation, planted in orderly plots.  This was farm land, then, buried within the heart of dead Ceres.

And now the men saw what manner of creatures inhabited this artificial world.  From out of the shadows of spidery, grotesque trees, loaded with green fruit, came a group of furry, spheroidal monsters with thick legs and delicate, tentacular arms.  Their mouths were toothless orifices in their globular bodies.  Their eyes, set close to their mouths, were cruel and keen.  That intelligence looked out through those orbs could not be questioned.

Each creature wore a harness decorated with fragments of the red substance which had been the undoing of the Earthmen, and odd, pistol-like weapons dangled in holsters fastened to those harnesses.

The Cereans allowed the Earthmen to advance along the road which led across the cavern floor.  Then they fell in behind them, like a military escort...

Stid:  Well now, this is more your cup of tea, you two - isn't it?  Real Cerean aliens, real living landscape...

Zendexor:  But underground, artificially hollowed out - and you know I'm not so keen on retreats from the surfaces of worlds.  Detracts from them.  Still, as I said before, it's a good enough story, only -

Stid:  Let me guess what's bothering you.  I'll quote from near the end.

"Barring violence, the master of Ceres was probably immortal; for, in spite of his wisdom, he had no complex organs to wear out.  A few cells in his structure would die, but they would be replaced by the splitting of other cells.

"The entity was very old, and probably had seen much in his time.  He and the lesser Cereans must have evolved on another greater planet, where their symbiotic relationship began, for Ceres is too small to have produced a native life of its own..."

Harlei:  Hey, Zendexor, I have an idea.  It's just Professor Farnsworth's opinion, after all.  And professors can be wrong!  Maybe they were real Cereans after all.  Maybe the story is set in an over-skeptical age where people lack sufficient belief in the ability of worlds to breed their own forms of life.

Stid:  Aha, looks like you've cheered him up.  Enough, maybe, for him to tolerate my contribution - a rather un-native Ceres, in fact as un-native as one can get, but still, cute enough in its way -

Welcome to the "Fair of the Worlds" in The Worlds of Tomorrow.

The Fair is held on Ceres, with quarters for all the major OSS species.  I leave you with the magazine illustration, the map of the venue, which says it all: 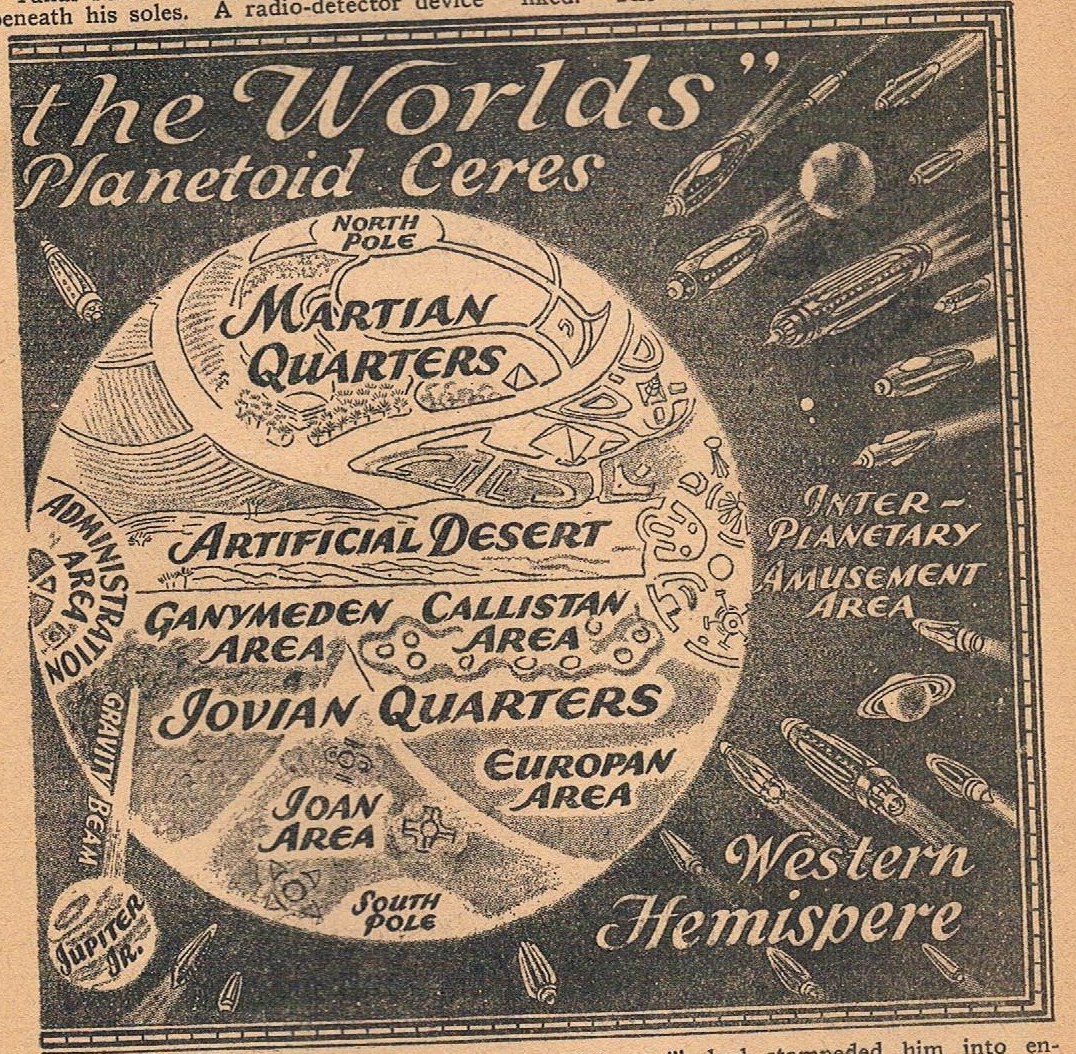 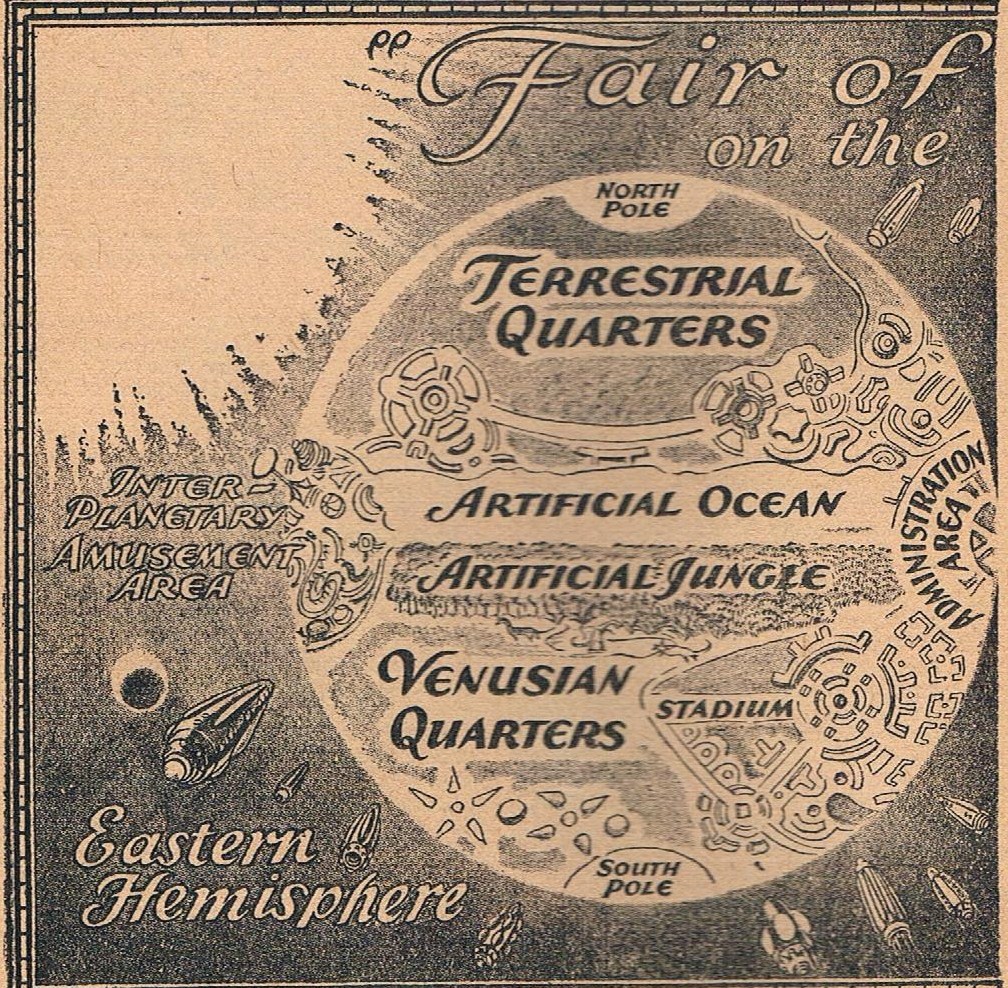 See Sidelight on Ceres for scenes in The Ship From Infinity by Edmond Hamilton, plus some thoughts on whence the planetoid derives its literary power.

See the Diary entry, Orbital Preservation Order, for a scheme to move Ceres to turn it into a moon of Venus.

For musings on a magnificent NASA video see Flight Over Ceres.