what to see on
pallas

For a scenic view, and an answer-page for Guess The World...

...Pallas swung round in their field of vision, and there was a fleeting glimpse of sun-lit spires of mountains, shadowed valleys, and mysterious crevasses from which clouds of steam and yellow vapour curled.  Still it seemed they must crash against one of those slender pinnacles.  Nearer it came like a flash; a dizzying blur, now, that drove directly in their straining faces.

And then, abruptly, it was gone.  Already thousands of miles astern, the danger was past...

He withdrew his knife from his pack and examined the nearest fungus. Of course, it wasn’t truly a fungus, that was an earthly form of life, but this... blurred the line between single organisms and colonies... resembled a mesh between the two... Should one be hurt or damaged, the others could pick up its slack until it was healed, as each possessed the necessary biological machinery.

This, incidentally, was what made the zuff so fearsome. As its unfortunate discoverer, Viron Zuff, had learned, a bullet would not stop it as long as enough of its “nodes” remained unharmed. Some of those nodes, particularly its thrasher-tentacles, were devastatingly dangerous.

Cutting into the fungus, he managed to remove a piece that seemed suitably dry for burning. Since he had no idea what growth would most easily light, he decided to hedge his bets and collect some of everything, the grass, the shrubs, a crawling vine and some others, and test each one with his magnesium lighter.

An hour later the sun was plunging below the horizon, and the ground was covered in a thin frost everywhere except a wide circle around Raker’s crackling fire. Sitting near it made him feel secure, and as he lay with his head resting on his pack he thought again of the situation the Patrol had left him in. I hope there’s open water somewhere out here; so far everything seems to get its water from the ground, or perhaps the air, neither of which do me any good. But I can’t waste time every day searching for springs, not when the sun’s only up for four hours. Or perhaps nobody survives this test and the Patrol is staffed by corpses. He grinned, remembering some of his colder, less animated instructors... 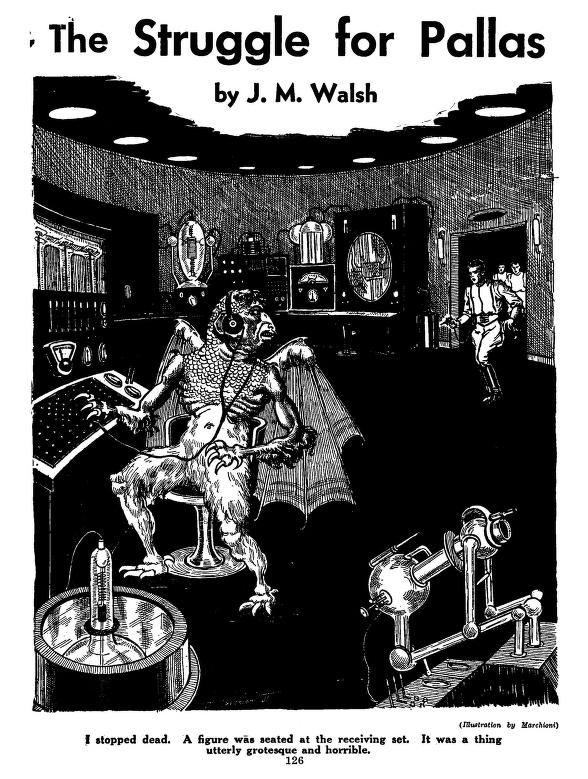 From the top of the cliffs we could see across the plain to the neighboring city of Clion, a place of some five thousand inhabitants, and the chief town of Pallas.  Its roof tops glittered in the sun, but save for the fact that it had a curiously deserted appearance we could at first see nothing out of the ordinary.  Then what I had taken to be a shimmer in the air resolved itself into a wisp of smoke.  It thickened as we watched, seemed curiously thickened with tongues of flame.

But that could wait.  The Guards' quarters were our immediate concern.

We entered into the main room, where communication with the planets was maintained.

I was leading, but I stopped dead on the threshold with a stifled exclamation, and an odd feeling of horror constricting my throat.  A figure was seated at the receiving set, head-phones over its ears, and fingers straying over the bank of keys in front of it.

For the moment, so utterly unprepared was I for what I saw, I imagined it must have been a Guard.  It was not.  It was a thing so utterly grotesque and horrible that I can scarcely find words to describe it.  It was a biped of sorts, though it seemed to be covered with some kind of bark-like scales.  Its feet ended in claws; its fingers were hook-like.

One of the men exclaimed at the sight.  The creature must have had remarkably quick hearing, for it turned in a flash, baleful green eyes stabbing at us like heat-rays.  We recoiled in horror.  It was the gargoyle of the medieval world come to life, only a hundred times more horrible and more intelligent-looking than anything the mind of man had ever conceived.

I raised my pencil ray tube, and pressed the button.  The tiny ray stabbed out and impinged on the creature's breast.  There came a little puff of smoke and a queer fetid odor, but beyond that the thing seemed unharmed.  Its next move was made so quickly that it caught us almost unprepared.

Of a sudden it seemed to launch itself from the sitting position it occupied...