"Your godhead lies there.  Go and take it!"

The eyes of the barbarian were dazed and wild, fixed on the dark dim line of the crater that showed in the distance, fixed on the incredible glory that shone there.

"It beats," he whispered, "like the beating of a heart."

Stid:  I might have guessed you'd quote from The Moon that Vanished.  Leigh Brackett found radioactive life a handy plot device.  She employed it so often, as a kind of all-purpose transformative magic - you almost might as well call it that, anyway - that I became slightly impatient with it. 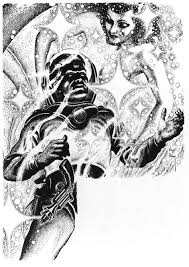 Zendexor:  But it works.  I mean, in her OSS stories, it does what she wants it to.

He dragged himself over the edge and let himself go, down the farther slope.  He screamed once when the vapor closed over him.

After that there was a period of utter strangeness.

It seemed that some force separated the atoms that composed the organism called David Heath and reshuffled them into a different pattern.  There was a wrench, an agony beyond anything he had known before and then, abruptly, the pain was gone.  His body felt well and whole, his mind was awake, alert and clear with a dawning awareness of new power.

In The Moon that Vanished the "Moonfire" radiates from what's left of an ex-satellite of Venus.  The substance of that ancient worldlet, which crashed onto the planet's surface long ago, has a dangerous creative power, which works in conjunction with the human mind - a power (like that of the semi-sentient fluid in the asteroid tale The Lake of the Gone-Forever) by which a man's dreams can be brought to life, or to a sort of life...

Zendexor:  I can tell by your tone, Stid, that you're impatient for me to pass from colourful Brackett science-fantasy to something more in the line of hard sf.

Well, here's a different Venus.  But not less colourful! 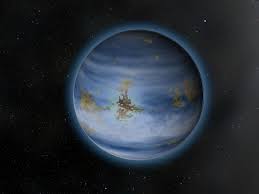 About four hundred million years in our future, Terrestrials, finding that Earth is about to be destroyed, decide they must move en masse to Venus - but first, they need to carry out some planetary engineering to make the place habitable for Man.  The oxygen in Venus' atmosphere is insufficient - so it must be increased by electrolysis.  But the machinery is subjected to some underwater attack:

Evidently there must be intelligent life somewhere in the ocean of Venus.  Evidently the marine Venerians resented the steady depletion of their aqueous world, and were determined to stop it.  The terrestrials had assumed that water in which no free oxygen was dissolved could not support life.  But observation soon revealed that in this world-wide ocean there were many living species, some sessile, others free-swimming, some microscopic, others as large as whales.  The basis of life in these creatures lay not in photosynthesis and chemical combination, but in the controlled disintegration of radio-active atoms.  Venus was particularly rich in these atoms, and still contained certain elements which had long ago ceased to exist on the earth.  The oceanic fauna subsisted in the destruction of minute quantities of radio-active atoms throughout its tissues.

The sheer richness of Stapledon's work is nowhere better exemplified than in the way he tosses off two extra native life-systems, those of Venus and Mars, as well as giving us the main story of the eighteen human species which form the main thread of his book.

Harlei:  Agreed.  His Martians and Venerians are brilliant creations.  Hard to say which is more original...

Stid:  A meaningless question, since originality is not quantifiable, but I can suggest that the achievement with the Venerians is all the greater in that he does it in just three pages.  Let's quote some more.

Several of the Venerian species had attained considerable mastery over their physical environment, and were able to destroy one another very competently with various mechanical contrivances.  Many types were indeed definitely intelligent and versatile within certain limits.  And of these intelligent types, one had come to dominate all the others by virtue of its superior intelligence, and had constructed a genuine civilization on the basis of radioactive power.  These most developed of all the Venerian creatures were beings of about the size and shape of a swordfish.  They had three manipulative organs, normally sheathed within the long "sword", but capable of extension beyond its point, as three branched muscular tentacles.  They swam with a curious screw-like motion of their bodies and triple tails.  Three fins enabled them to steer.  They had also organs of phosphorescence, vision, touch, and something analogous to hearing.  They appeared to reproduce asexually, laying eggs in the ooze of the ocean bed.  They had no need of nutrition in the ordinary sense; but in infancy they seemed to gather enough radio-active matter to keep them alive for many years.  Each individual, when his stock was running out and he began to be feeble, was either destroyed by his juniors or buried in a radio-active mine, to rise from this living death in a few months completely rejuvenated.