idea for another site:

Here's a suggestion for another website, on the lines of this one but for the "nearby" interstellar scene. 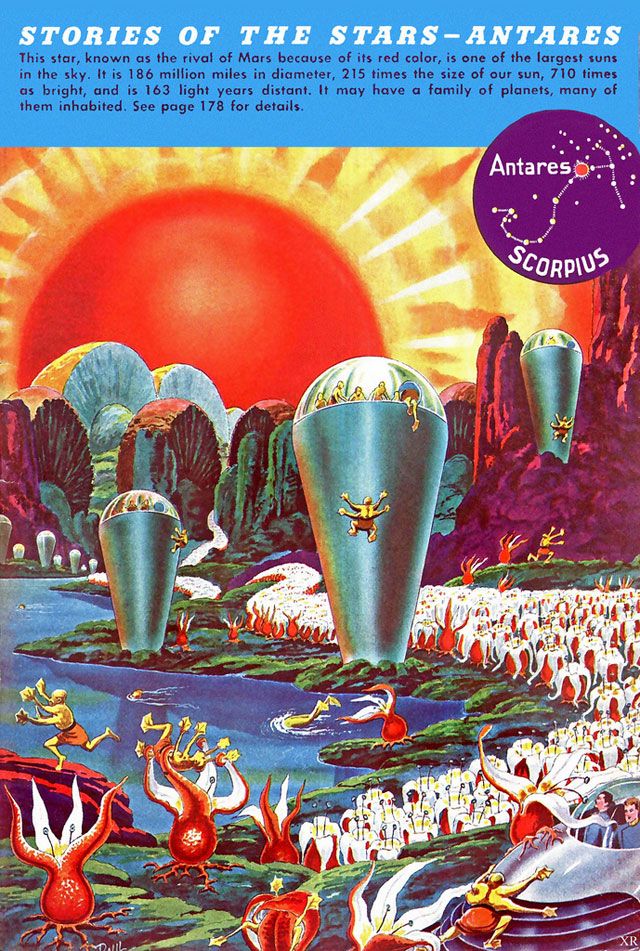 Stid:  Wait, before you go on: how near is "nearby"?  That word - in the absence of any natural frontier - isn't going to save the proposed new site from dissipating into generality as it rambles off into the interstellar vastness... unless, somehow, you give it shape.

Zendexor:  I was thinking, "stellar neighbourhood" could mean "out as far as the most distant named star."

Stid:  Ah, the familiar folkloric stars.  Sirius, Procyon, Vega, Arcturus and so on, all the way out to Deneb.  Naturally at the bright end of the scale, with high intrinsic luminosity, spectral type F, A or B, these stars are precisely the ones most likely too hot and short-lived to have planets with intelligent life; on the other hand they do have instant name-glamour, and I can visualise, now, the kind of website we're most likely talking about: a celebration of all that cutely unrealistic sf featuring planets and aliens around Rigel and Betelgeuse and so on.  You're going to have fun, Zendexor.

Zendexor:  I'm not, but someone is, I hope.  I'm throwing the suggestion into the arena, in the hope that it will be picked up by a webmaster with more time to spare than I have.

Harlei:  Stid, you mentioned Deneb, but isn't that a bit far for the "neighbourhood"?

Stid:  Not a bit of it!  2500 light-years away; that's only one fourtieth the size of the Galaxy.  Stars with names are all close by as galactic distances go.

Zendexor:  I agree with Stid here: you could count Deneb as the "stellar neighbourhood".  You could, in fact, regard it as the frontier.  That would permit the inclusion of some famous nebulae and star clusters within the site's permissible range.  You could then have pages on the Pleiades (see Samuel R Delany's Nova) and the Horsehead Nebula (see Asimov's The Stars Like Dust)...

Stid:  Before we get carried away, might I suggest an alternative?  Doubtless the Sun was born alongside other stars in a molecular cloud... Don't tell me, I know, that association has long since dispersed.  But - might it have left traces?  Wisps of slightly greater than usual concentration in the interstellar medium?  You could use that as an excuse for a smaller range... say as far as Aldebaran.

Zendexor:  A nice idea, but forget it, Stid.  The Rigellians and Denebians would be up in arms - it would never do.  Let's not exacerbate interstellar tensions.  Rather, let's draw up a preliminary list of sources to give a start to the site... always in the hope that someone might take up the suggestions and add to them. 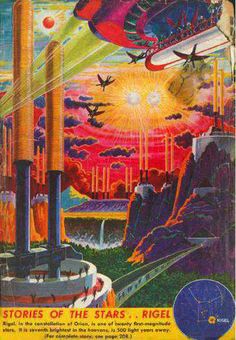 The sources listed here are of literary references to named stars.  The stories don't always have scenes actually set around those stars; e.g. Wasp is set in the Sirian Empire, not at Sirius itself; but it thereby shows that star's importance.  Similarly there's not much about Vega in Agent of Vega, but you feel it somehow...  So anyhow, here's a preliminary listing.  I'll no doubt be adding to it as more stuff occurrs to me.

Antares - Edmond Hamilton, Kaldar, World of Antares; The Star Kings and Return to the Stars; Donald Wandrei, The Red Brain.

Fomalhaut - Edmond Hamilton, The Star Kings and Return to the Stars.

Rigel - John Brunner, The Long Result; Eric Frank Russell, Next Of Kin; Jack Vance, the Demon Princes series (for the 'Rigel Concourse': 26 planets, the initial letters of their names running from A to Z). 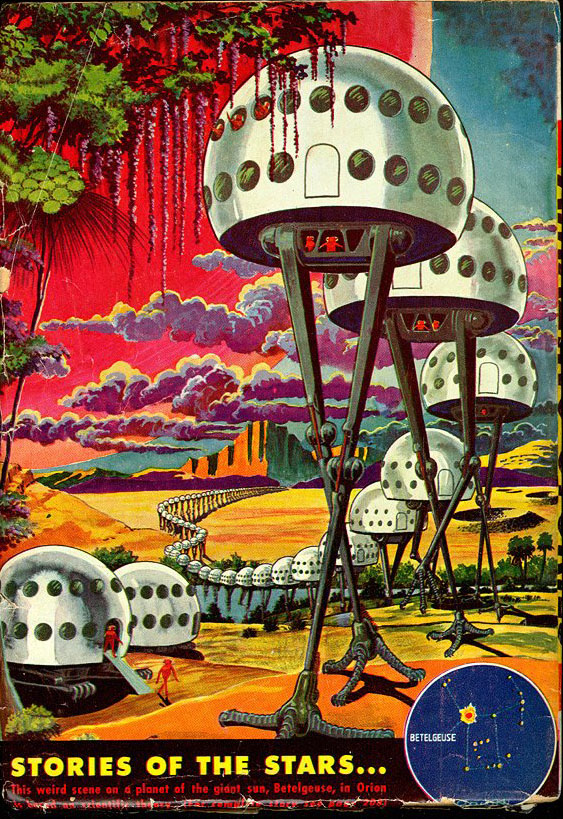 The S.N. site could have a page for these e.g:

...the putty-plastic from Aldebaran VII

So far, we've sketched out an idea for a site in which, just as Solar System Heritage is about the literary characters of worlds in our System, the Stellar Neighbourhood Heritage would mainly consist in exploration of the characters of various well-known, named stars.

Here are some further thoughts regarding themes to be pursued.

For the nearer stars, we could include those with mere designations (Alpha Centauri, Epsilon Indi, Tau Ceti) as well as those with proper names (Sirius, Procyon, Vega, Altair).  And of course once you decide on that, you expand into modern stuff, by authors who would have turned up their noses at setting their tales around Vega but are happy to go for more plausible Epsilon Eridani.

For 61 Cygni, Simak's Time And Again; for Proxima Centauri, Murray Leinster's tale of that name plus Philip K Dick's Now Wait For Last Year; for Alpha Centauri, Leigh Brackett's Alpha Centauri or Die! and Niven and Pournelle's Footfall; for Sigma Octantis, Poul Anderson's The Byworlder; for Tau Ceti, John Greer's Star's Reach (that would put the book on both sites!) and Ursula LeGuin's The Dispossessed... and so on and so on.

You could also explore "crosswise"...  Thematic pages could include pages on "Type A Stars" or "Type F Stars", etc.  Poul Anderson's Hunters of the Sky Cave is a memorable attempt to portray life forms which evolved (if I remember correctly) round an F star.

A page on Dark Nebulae...  e.g. the Coal Sack and the Horsehead; Niven and Pournelle's The Mote in God's Eye as well as Asimov's The Stars Like Dust.

Stid:  Well, your eyes are lighting up as the ideas start to flow, Zendexor!  Looks like quite a job, but you're no doubt eager to wade into it.  I wish you every success.

Zendexor:  I told you, I have no absolutely intention of undertaking the project myself.  Looking after the OSS is more than enough for me without the OSN as well.  I'm simply sketching out some of the possibilities, so that someone else may take them up.  But if that does happen, I'd be happy to support the new site with contributions.

Zendexor:  Ah, now that's a point.  A vital point, which I could have made at the start.  Do we actually need the word "Old" here?  No, actually we don't!  Our current dreams still envelop the stars!  Space probes haven't snapped away the romantic views of the stars as they have those of the planets.  (And in John Greer's view, they never will, because we'll never really get out there.)  Even the old ideas of life around Vega and Sirius might be true after all.  So we're in the happy position of being able to avoid contradictions to all our visions of what those stars' worlds may be like.

Therefore - the Stellar Neighbourhood, pure and simple.  Not the "O" SN, but the SN, full stop!  Though admittedly some of the literature is delightfully old-style...