[ + link to:  The Implicizer Aimed at the Martian Diagram of Power ]

James Blish's scenarios are most unpredictable.  One of the sharpest intellects in the field, he can also provide imagery and drama as potent as anything dreamed up by van Vogt, with the added impression that he probably knows, more than the reader does, what he is talking about. 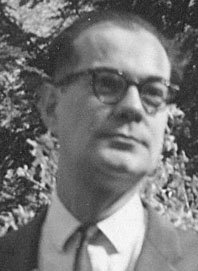 Harlei:  Is this some kind of dig?

Stid:  Yeah, Zendexor, "he probably knows, more than the reader does" - are you hinting, in your sly way, that Blish is guilty of obscurity?

Zendexor:  He can be - but he more than makes up for it.  You feel you're reading something compressed, something with such a lot in it that it repays careful study - though a superficial reading of it can be enjoyable enough.  What I'm trying to say, is that Blish is an enigmatic writer.  A reader can expect just about anything... except waffle.  That is praise.

My own favourite is Midsummer Century.  It's a case in point.  Only about 100 pages long, it's an epic which some authors would have spun out to four times that size.  And it's unputdownable. 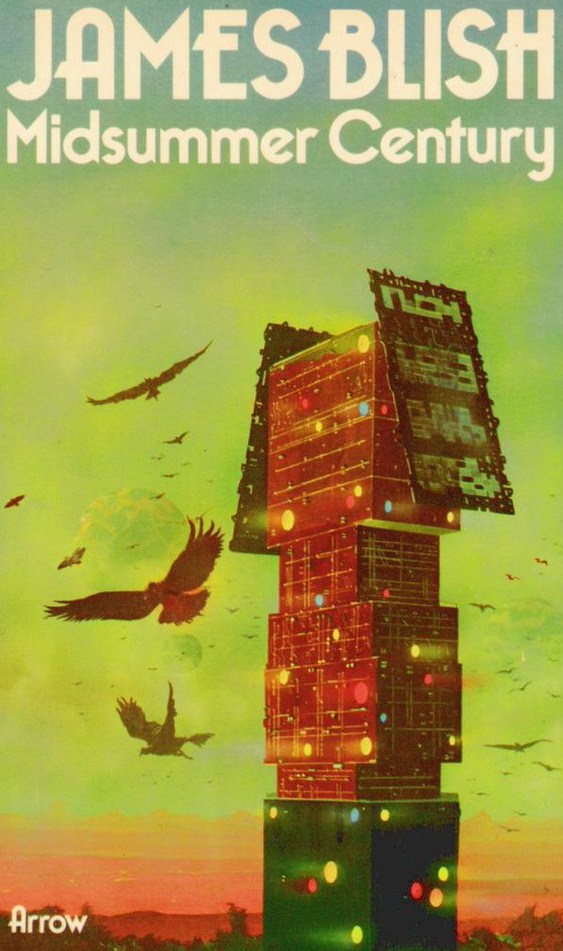 Stid:  I still think you're likely to put quite a few readers off by insinuating that sometimes Blish could have been a bit clearer...

Zendexor:  It can go either way, can't it?  It can put off, or it can inspire.  Let's consider an example.

In Midsummer Century a twentieth-century man named Martels finds, after a fantastic accident, that his consciousness is trapped inside the brain-case of the deposed planetary Autarch of 25,000 A.D.  Martels stays that way for months, before he escapes.  During those months he can only see the inside of a room in a deserted museum, and the occasional visitor.

Not a recipe for action, is it?  So in the hands of a lesser author, this part of the book could easily have slid into boredom and frustration on the part of the reader, to match that of the protagonist.

But on the contrary, it's riveting.  There's the intermittent hostility of the Autarch himself, who resents the intruder in his brain, and there's the story of Martels' attempts to come to terms with what has happened and to find out about the wider world of 25,000 A.D. while he figures out a way of escape.  It's classic, wonderful science fiction, and it shows how constraint can evoke its opposite -

Harlei:  I get you.  It's like when evoking darkness: if you describe a little torch shining amid the gloom, that makes the gloom more real than if you just have blackness unrelieved.

Zendexor:  That's it.  Martels' imprisonment is a way to make the reader roam.

Stid:  By the way, are you sure you can get away with counting Blish as an OSS writer?  He seems considerably more cerebral and scientific than most of them.  And his Solar System is not much different, as far as I can tell, from the real one.

Zendexor:  Ah, but an old fox like you, Stid, ought not to be fooled by the scientific tone.  As you'll note on the Titan page, his trick is to use the science to make his fantastic notions plausible - but they remain quite fantastic at times!  See also his (non-OSS) tale Surface Tension, which treats of - would you believe - intelligent microscopic life.

Writers of this sort, if there were enough of them, might form a sub-genre which we could call "back-door OSS".  Stories which seem NSS but in which the spirit of the OSS lurks.

Titan:  How Beautiful With Banners

James Blish, Midsummer Century (1972); "Bridge" (Astounding Science Fiction, February 1952); "Seeding Program" (originally appeared in The Magazine of Fantasy and Science Fiction (February 1956) as "A Time to Survive", then in The Seedling Stars (1957)); "How Beautiful With Banners" (1966, commissioned for Orbit 1, ed. Damon Knight; also reprinted in the Blish collection, Anywhen (1971)); "Surface Tension" (1952; incorporated into The Seedling Stars (1957))

For a discussion of Blish's Ganymedean life, see Pinnah-Birds and Genetic Engineering.

For more on "How Beautiful with Banners", see Feeling Naked on Titan - Response.

For the view of Jupiter from its innermost satellite in Bridge, see Amalthea.