the implicizer aimed at
the martian diagram of power

"The building of gigantic projects for ritual purposes - doing a thing for the sake of doing it - is the last act of an already dead culture.  Look at the pyramids in Egypt for example.  Or an even more idiotic and more enormous example, bigger than anything human beings have accomplished yet, the laying out of the 'Diagram of Power' over the whole face of Mars.  If the Martians had put all that energy into survival instead, they'd probably be alive yet."

The above snippet is one of the most intriguing and tantalizing CLUFFs in Old Solar System literature... and some of us may respond to it with a determination not to be tantalized any longer, and to fill out the picture ourselves.

Harlei:  It's really exciting, Zendexor, that we're going to have a go at this one!  Let's get under way!  We're as qualified as any to expand it into a full-blown, detailed background for a story, or maybe we'll even get so far as to make a story out of it.

Stid:  Er - far from me to dampen your enthusiasm, folks, but in what do your 'qualifications' consist?

Zendexor:  Suffices - or, at any rate, excuses.  You see, Stid, in this game there is no such thing as cheating.  If you're in the imagination game, the only law you must obey is... to imagine.  Now don't purse your lips at us, but listen while we have a go at extracting the juice from this CLUFF... or you can even join in if you like.  We'll welcome your participation as we operate the implicizer.

Stid:  All right, but don't be disappointed if you find this job a lot harder than when you aimed the gadget at Blowups Happen.  On that occasion you were dealing with a story which gave  you quite a few clues about the ancient inhabited moon.  But in Blish's Bridge all you have to go on is the fragment quoted above, in truth a mere CLUFF, and as you well know, CLUFFs are sips which leave you panting in vain.

Harlei:  Not when Zendexor has finished wielding the Implicizer.  He's like a palaeontologist reconstructing an entire skeleton from a single bone.

Stid:  Hear, that, Z?  You're on the spot.  Now - produce.  Get your magic gadget to expand Blish's hint into a history of Mars and a physiology of its inhabitants.  I want to know what they looked like, what they had for breakfast - everything.

Zendexor:  As is often the case, Stid, your words contain an accidental grain or two of wisdom.  You jokingly call the implicizer a "magic gadget" and, actually, ideas connected with the definition of magic do come into the use of it here.  For although science fiction is not about magic, it may portray alien beings who do believe in it, or are involved in something akin to it.

Stid:  Can I make a guess at what you're driving at?  The old Martians, with their world drying up, wasted their energies in trying to summon demons to revive their water supply...

Zendexor:  My theory isn't of that sort, no.  What you mention is one of the two main strands of "magic", the contact with supernatural beings, or (to put it in sf terms), the crossing of dimensional barriers in order to contact powers which are untrammelled by the laws of our universe.  Something like what was done by foolish ancestors of the people in The Night Land.  The idea that desperate Martians might try it is a usable sf idea, it might take us down a fascinating path - a sort of Martian Lovecraftian scenario - but at present I'm aiming the implicizer in a different direction.

My interpretation of the Martians' Diagram of Power uses what I'll call the second main definition of "magic": the general idea that symbols may have a feedback effect upon reality.  Thus, whereas we usually take the line that "the map is not the territory", a mage might on the contrary aver that the map jolly well is, or rather can affect, the territory.

I wish to cite another work which uses this idea explicitly in connection with an advanced race.  I refer to Skylark Duquesne.  It's ages since I read it, but I do remember that the idea that "the map can affect the territory" comes up and is taken seriously.  The idea does not turn the novel into a work of fantasy; rather, it is presented in a tone which keeps it within the genre of philosophical science fiction.

Similarly we might, in the case of the Diagram of Power -

Stid:  Let me break in here.  I sort of see what you're getting at.  The desperate Martians conceive of the idea that they might get the extra resources they need by "attracting them into existence", as one might say, by means of a diagrammatic depiction of them.  Just as the map can be the territory, the wish-fulfilling diagram can become the reality.

Zendexor:  You've got it.  They put all their resources into it.  Like the population of the First World State in Last And First Men put their energies into the futile worship of "Gordelpus".  They're playing their last card. 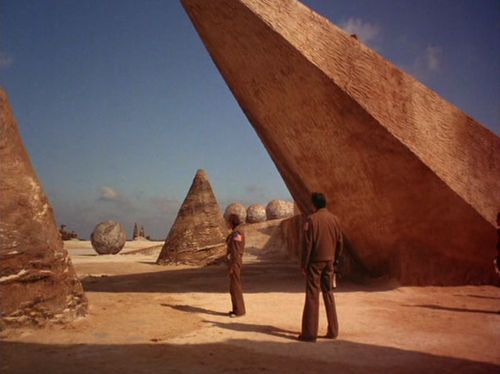 mooching among the remains...

Stid:  The poor dopes.  And then comes the terrible, tragic, final disillusionment when the environmental decay reaches the point of no return and their Diagram hasn't worked and they at last recognize that it's just a diagram, just a useless monument to their own wrong-headedness.  The idea makes one shiver.  I admit, Zendexor, that your gadget has done a good job after all, in extracting from a CLUFF this grim tale of a failure of mentality.

But can you give a picture of the Martians' physicality?  The implicizer, though it may give us an outline of their history, surely can't show us what they actually looked like.

Zendexor:  Not so fast.  One card remains to be played.  And it's a vital one which calls into question your entire approach to the topic so far.  All along you've been assuming, Stid, that the Diagram of Power failed to work.

Stid:  Well, that's what the Blish CLUFF says, doesn't it?  It says the Martians are extinct.  Their mumbo jumbo can't have worked.  The practice was as useless as the theory was specious.

Zendexor:  But - ARE they extinct?  The narrator in the Blish story assumes so, hence the phrasing of "If they had put all their energy into survival instead".  But it is possible to be mistaken about such matters.

Stid:  You mean, for instance, the Martians might still be lurking in some underground refuge...

Zendexor:  Forget that idea.  Instead, just imagine - just suppose - that the Diagram of Power had worked.  What would the result be like?  What would it give them?  Certainly not the mere option of a miserably protracted subterranean survival.

Stid:  I'm with you there.  They must have set their sights higher than that.  Didn't we agree earlier, that we were trying out the idea that the aim of the Diagram project was to gain for the Martians the resources they needed... well then, that means, surely, the rejuvenation of Mars. The reversal of its decline.  And that did not happen.

Zendexor:  But there was another way, which the implicizer teases out of the evidence, showing us how the Martians may have achieved their aim after all: namely by altering themselves!

You see, there's another aspect to the implicizer, or at any rate to the de luxe model which I'm using: when focused upon a particular tale it also picks up the context of other related storylines, and uses them to fill in gaps where necessary, like the scientists of InGen in Jurassic Park plugged the gaps of their knowledge of dinosaur DNA by... if my memory serves me correctly... slipping in some frog stuff.  And so in the case of the Martian Diagram of Power we can likewise get clues from other tales, that's to say from the tracks scored in the fabric of legend, to complete the story.  We can for instance cite the dematerialized/energized Martians in Bradbury's The Fire Balloons, and the similarly dematerialized/energised (though far less benevolent) Martians in Hugh Walters' Destination Mars.

Harlei:  You've done it, Zendexor!  You've completed the story!  We now know what really happened - the Diagram of Power uplifted the Martians to a higher energy state, wherein they're invisible to us!

Stid:  Hmm... and all with the aid of a diagrammatic spell?

Zendexor:  Who knows how these things work?  It may be, the role of the "diagrammatic spell" was merely that of a technique of concentration.  A practical task which encouraged a particular mental discipline which, in turn, acted to trigger a purposive stage in their evolution.  Quite expensive, I grant you - the outlay for an engineering project which extended across the entire surface of Mars must have been considerable, and probably pushed their final budget far into the red - but still, if it helped secure the race's deliverance, why not?