[ links to:   The Archives of the Moon  -  The Implicizer Aimed at "Blowups Happen" ] 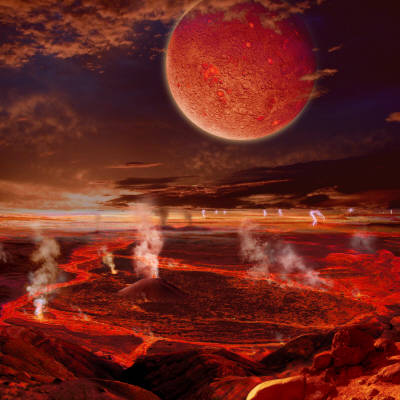 maybe not cool enough just yet

A rare, precious sub-genre of the Old Solar System, tales set on the moon millions of years ago - when according to OSS lore it was inhabited by native  Lunarians, or Selenites - are unfortunately few in number.

I began to treat of this topic on the main Moon page, and there the reader will still be able to find some material on the ancient inhabited Moon, but eventually, in order to say more about it, I made space here to explore further.

Let's first consider the strange and beautiful Lost Paradise.  This is one of the nine 1930s stories that feature the interplanetary outlaw Northwest Smith.

Smith has a habit of getting into scrapes involving strange cultures on Mars and Venus, but in Lost Paradise he faces an even more startling and outré danger - one involving mental time travel and the fate of our Moon.

The story is only 27 pages long but you get a wealth of imagery, mystery, suspense and action in those 27 pages.  Northwest Smith discovers - to his own great peril - that there are survivors on Earth of a vanished civilization of Moon-people: people of slender build, "white-haired and as fragile as glass".  One of them (under unwise pressure from Smith's Venusian friend Yarol) reveals the secret of the Moon - reveals it in such a way that Smith's mind undergoes a journey into the past, into the body of a Lunarian.  And this Lunarian turns out to be a witness to the crisis of the Moon's history. 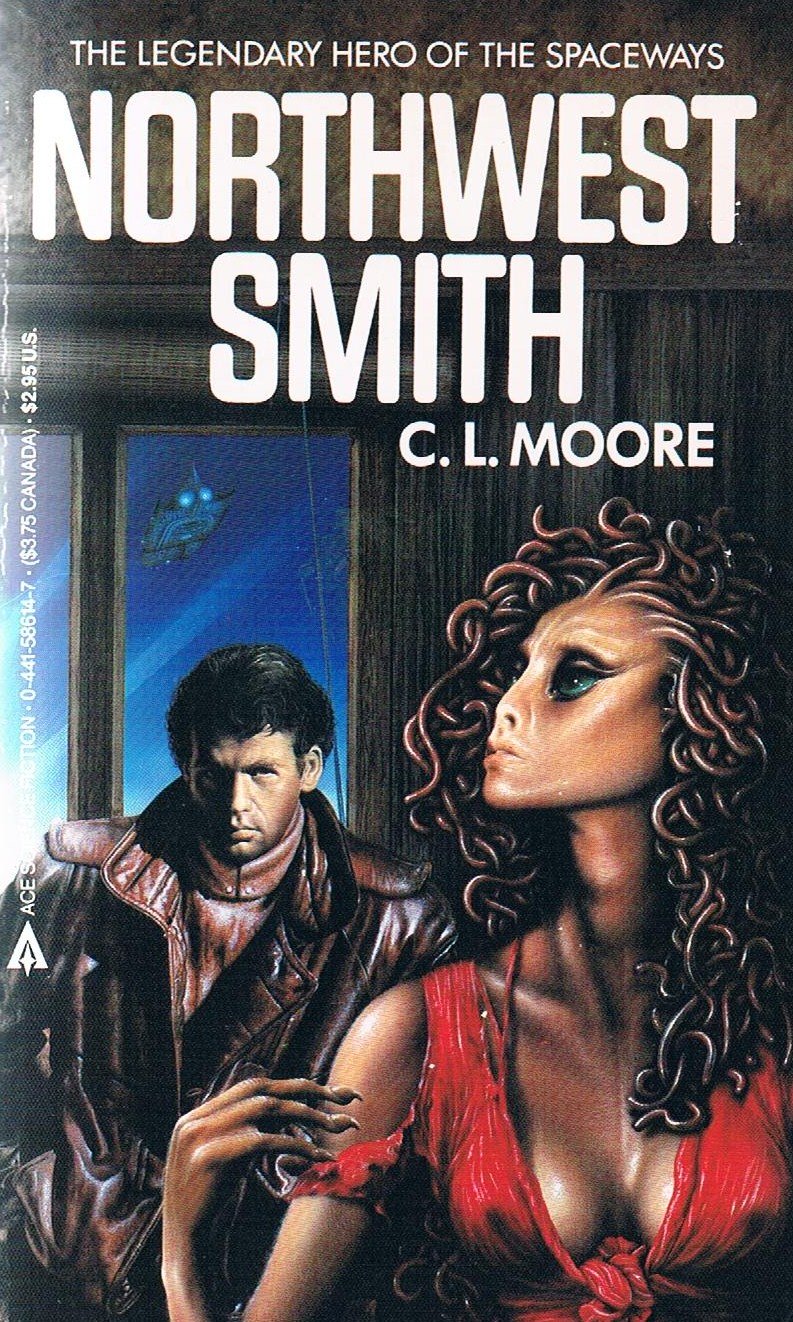 Harlei:  The crisis?  I suppose it would be.  Such a story is almost bound to deal with the reason why the Moon is now a dead world.  But I suppose one is allowed to see a bit of the "lost paradise" before it dies?

Zendexor:  Indeed, one gets to see a bit of the life of the Lunarians.

At first, Smith merely marvels, unsuspecting, as he looks through ancient eyes while walking through the lunar city, Baloise the Beautiful:

Great open squares here and there broke the ivory ranks of the buildings, and there were men and women moving infrequently through the streets, fragile as birds in their Moon-born delicacy, silvery pale under the immense pale disk of high-swinging Earth that dominated that scene...

However, as he shares in the emotions of his host-body, Smith notes an undertone of fear.  It transpires that the ancient, fragile lunar biosphere was dependent for its continued existence upon the support of a sinister trio of godlike beings.

"Be it remembered," said the thin, hot little voice, "that all the world of Seles owes its existence to ourselves, who by our might hold fire and air and water around its globe.  Be it remembered that only through ourselves does the flesh of life clothe this little world's bare bones.  Be it remembered!"

The price these beings demand is high - they seem to be some sort of devourers of life-force - but it's a price the Lunarians are prepared to pay.  When an individual is summoned, he accepts his fate.  But not so Northwest Smith...  and so the stage is set for tragedy. 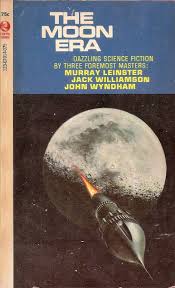 Zendexor:  The Moon Era - likewise - ends tragically, though not with the death of the Moon.  Here, the threat to advanced lunar life comes from a branch of that life - a group called the Eternal Ones, over-reliant upon machines, who have given themselves machine bodies.

Here, by the way, unlike the previous tale, the Lunarians are not humanoid - nothing like it.  The downy, limbless survivor whom the Earthly time-traveller meets

had been the leader of a community of beings that had lived on the highlands, near the source of the great river that I had seen.  A community in some respects resembling those of ants or bees upon the earth...

Here, just for a moment, we sense a vast loom of themes, an ideological Beyond that whispers: the Moon has a connection with the insect lifestyle: link: Wells' Selenites, Williamson's downy creature...  So a chain is formed: or say a Venn diagram in which The First Men in the Moon overlaps via "insect" with The Moon Era, just as The Moon Era overlaps via "disaster and loss" with Lost Paradise...  and both the gracile insect form, and the loss of species life, are appropriate - given the smallness and fragility of the Moon...

But rather than launch into all that, let me quote a passage which, for me, sums up the greatness of The Moon Era.  I don't know how well it can work out of context, but I can hope.  Here is the narrator exploring the young and rotating Moon, a Moon circling the young as-yet lifeless earth which appears huge and white in the sky, rising and setting as the Moon turns on its axis in eighteen hours.

In half an hour I had arrived at the edge of the red plateau.  A steep slope fell before me to the edge of the jungle, perhaps two-thirds of a mile below.  A slope carpeted with the thick fibre of the green moss.

A weird scene.  Clear cerulean sky, darkly, richly blue.  Huge white globe of the hot earth setting beyond the farther range of green mountains.  The wide valley, with the broad silvery stream, winding among golden forests, and patches of green.  The purple balloons floating here and yon, huge spheres swaying on the red cables that anchored them above the jungle.

I seated myself on the moss, where I could overlook that valley of eldritch wonder.  I remained there for some time, staring out across it, while I ate most of the food that I had brought, and half-emptied the bottle of water.

Then I decided to descend to the edge of the jungle.

Harlei:  I should have thought you would have chosen one of the passages about the Mother.

Zendexor:  Ah yes, the famous depiction of the lunar creature, the last of her kind, the hope of her race.  It's brilliantly done, but the meeting with the Mother happens after things begin to go wrong.  I preferred to quote a passage just before the crises start to happen: it's that wonderful time of possibility, when the explorer takes stock with a world of potential events in front of him.

Stid: Can you help me figure something out, please?  First, note this bit of description when he's coming in to land on the moon:

...I settled slowly, watching alertly through the ports.

A towering, crimson mountain loomed above the mist below.  I dropped towards it, increasing the power a little.  At last I hovered motionless above a narrow, irregular plateau, near the peak, that seemed covered with scarlet moss.

Then about ten lines later:

The machine had come down in thick green moss, that looked soft as a Persian rug.  A foot deep it was.  Dark green fibres closely intertwined.  In an unbroken carpet it covered the sloping plateau upon which I had landed, and extended almost to the top of the rugged peak to northward.

Harlei:  First impressions count, and I want them to be red.  It's more special and moon-like.

Zendexor:  Well, you can find evidence to support your wish.  About fourteen pages further on - after plenty of references to greenness - we find this description of the landscape as the narrator awakes after his terrible experience with the "balloon menace":

My first impression was that I was lying in bed in my old rooming place at Midland and that my alarm clock was ringing.  But soon I realized that the liquid piping notes that had disturbed me came from no alarm.

I forced open heavy eyes.  What startling nightmare was this?  A tangle of green creepers, incredibly profuse.  A wall of yellow thorns.  A scarlet mountain beyond...

See?  The mountain is crimson once more.  Let's leave it at that.  Jack Williamson can be a careless writer, and his style has been called, bluntly, "bad".  But, inconsistencies of colour aside, the simple bluntness of his style is just right for this story.  A sort of elegiac bluntness.

Through some strange telepathy induced by the pressure of the mantle upon my head, I was grasping the thought in the piping words.

It was a little time before I was sufficiently recovered from my astonishment to speak.  Then I replied slowly, phrasing my expressions carefully, and uttering them as distinctly as I could.

"I am a native of Earth.  Of the great white globe you can see in the sky.  I came here in a machine which moves through space and time...."

The thing piped again.  A single quavering note.  It was repeated until its meaning was formed in my mind.

I got the meaning of the reply, as it was being piped for the third time.  "I am the Mother.  The Eternal Ones, who destroyed my people, pursue me.  To escape them, I am going to the sea."

For The Last Lunarians by John Wyndham see the OSS Diary, 6th February 2017.

For The Big Time by Fritz Leiber see the Diary, A Book I Want to Like.

A passage from van Vogt's Moonbeast gives the reader a brief encounter with ancient lunar intelligence in the form of preserved Lunarian minds.

For an inhabited Moon orbiting close to Earth see Peculiar History of the Moon.

For a lurking remnant of lunarian civilization see Dylan T Jeninga's Whom Gods Destroy in the collection Vintage Worlds 2.

Ideas linking the lunar craters to the theme of ancient lunar life are explored in the following Diary entries: De-Luxe Science Patter and Atolls in the Lunar Seas.