a e van vogt and the old solar system 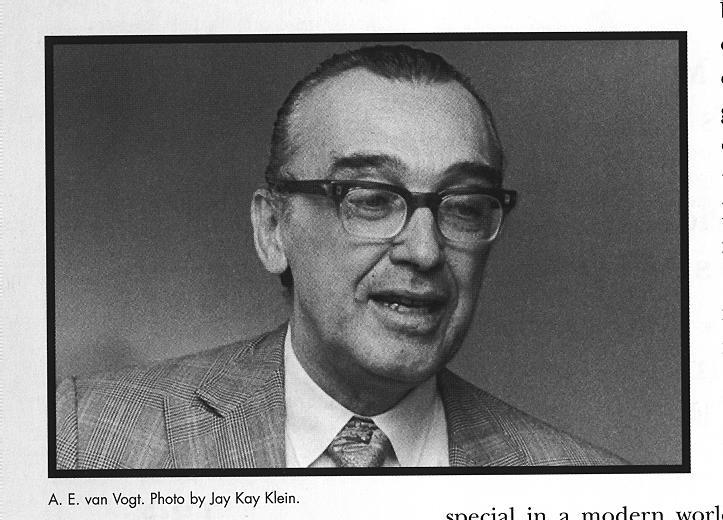 A E van Vogt was one of the greatest of all Golden Age classic sf authors - justly renowned for his imagery and the sheer potency of his plots and scenes.

A vintage van Vogt story is likely to stay in the mind like the blaze of a vivid dream.  It doesn't have to make rational sense (which is just as well, since it often doesn't) - it just is.  The best OSS example of the crazy-brilliant type of van Vogt tale is one of the first stories he wrote: Vault of the Beast.  Open that one and you're transported straightaway into the Golden Age!

His work is mainly terrestrial or interstellar, but he did not entirely neglect the Solar System.   One of his most memorable stories is set on Europa - and is surely the best Europan story in existence.  The giant Venusian trees in The World of Null-A - reminiscent of those on Amtor - are worth a visit.  The Red Planet dominates (mostly from afar) in the hectic visionary masterpiece Vault of the Beast, while the far more sober and straightforward The First Martian is a take on the theme of Andean Native Americans being the only Terrans who can live on low-pressure Mars: not a patch on Walter M Miller's Crucifixus Etiam, but a good enough read.

On Venus - The World of Null-A  and A Can of Paint.
See also a nice snippet about a Venusian squid in Film Library.
For an interesting report about Venus, see the ending of The Great Engine.

On a far-future Earth - The Book of Ptath.

On Mars - Vault of the Beast ; The Enchanted Village ; The First Martian.
Also brief interesting passages in Slan and The Weapon Shops of Isher.

For The World of Null-A see the OSS Diary, 22 January 2017, and a later Diary entry, Attitude-Fun.

For an excerpt from The Great Engine, see Venus Quiz.

For Empire of the Atom and The Wizard of Linn see the OSS Diary, 5th March 2017.
Also see the Diary, Fail-Safe Consqeuences, for the amazing scientific
beliefs in Empire of the Atom, concerning the proximity of Mars and the
velocity of spaceships.

For van Vogt's style, with reference to Vault of the Beast, see the OSS Diary for 29th March 2017.

For The Weapon Shops of Isher see the Diary entry, The Image-Beads of A E van Vogt.

See the extracts, Life expectancy on a trek across Europa  -  Far-filtered rain on Venus  -  Furry Bio-Fabricators of Mars  -  An ancient time-lock on Mars  -  Preserved Lunarian Minds