what to see on
neptune 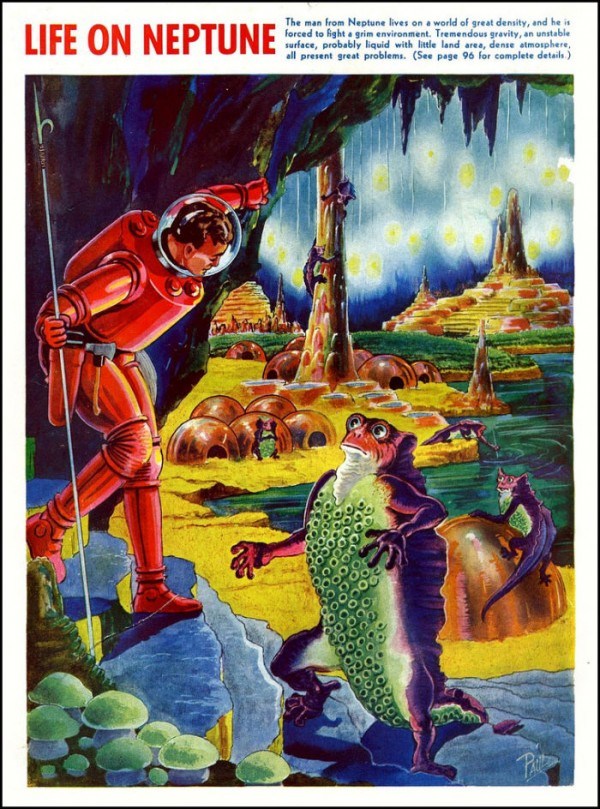 A scenic browse, and an answer-page for Guess The World....

looking around cautiously on neptune

...On the side of the planet away from the sun where they had expected to find darkness, they were astonished to find very little points of light.  Dana was puzzled and at a complete loss to explain it.

At  last, on the shore of a great, placid lake they found a wide clearing.  Something had happened to leave it almost devoid of vegetation as far as they could see.  There were rocky pinnacles and great rolling hills of solid rock.  Near the edge of the jungle a shallow river meandered among the hills and emptied into the lake.  Beyond the river the gullies gradually merged with the hill tops to form a plateau.

Dana lowered the ship and settled it gently upon the top of a low hill beyond the river.

"Let's get out here and look around," he suggested.  "We'd better take that little machine gun along; or maybe better, the portable death ray."

on the neptunian ocean

"We'll have to run beneath surface or these waves will smash us to pieces!" the Jovian mine-boss exclaimed.

The Martian's craft was also submerging, ahead.  Vasc Avam shifted the control of the deflecting rudders and their own boat slid down and throbbed along twenty feet under the surface.

Captain Future, deep in thought, looked out through the transparent wall of their craft at the lightning-lit waters they were travelling through.  Each violet glare showed the teeming life of the sea about them.

Shoals of brilliant, sparkling "diamond-fish" flashed away, like living gems.  "Air-fish", those weird winged creatures that could live with equal ease in the air or in the sea, flew away in startled undersea flight...

a deserted city on neptune

...a tenseness held all of us as our great flier's faceted polyhedron dropped on through the pale light beneath the great roof toward the black-walled, chequer-board like city that stretched across the surface of the great world beneath us.  And now, as we sank lower, our eyes were making out ever more clearly the details of that amazing city.

The rectangular black-walled compartments held, as we had half-realized from above, various strange-shaped mechanisms and objects which we could even now only vaguely discern.  We could see clearly, though, that here and there across all the vast city's compartmented surface there stood giant metal globes, each a hundred feet in diameter and each occupying a square compartment of its own.  There seemed hundreds of these gleaming globes, scattered here and there in compartments across the city's surface as far as we could see...

the lamp-lit fields of neptune

...The clouds had passed and a golden glory was settling over the face of the countryside.  While we stared, wondering how this could possibly be, we saw what perhaps we had overlooked before.  Set at intervals about the countryside were great many-faceted concave mirrors.  At least that was what they looked like to us.  Each was set on a vast straddle of lattice-like girders, and each, from the slight movements we saw as we watched, seemed capable of sweeping the full circumference of the sky.

But that was not all.  Between each pair of mirrors was another lattice-like structure, bearing at its top a great, glowing golden ball, a thing so huge and so brilliant that its size stunned us and the upthrust of its rays almost blinded us.

"Artificial suns," said someone in an awed tone.  "They've solved the secret of atomic energy!"

Excerpt from Professor Diego Kraken’s The Cetacean Myths of Neptune:

Once upon a time, there was a pod of Neptunian porpoises that lived outside the deep sea crevice called The Great Depths.  Now, Neptune is very far from the sun, and is covered almost entirely in water.  Life there has developed differently.  The main source of heat energy on Neptune is its enormous molten core which bubbles up here and there in vents.  Chemosynthetic bacteria cleave to these vents and so do ecological producers who transform the heat and oxygen dissolved in the water into what we may as well call plants, or more precisely seaweed.  Fish feed on these plants, and plankton feeds on the bacteria.  The convection of the hot water rising brings the plankton towards the surface, and the fourteen moons of Neptune make waves that mix in oxygen.  Life on Neptune tends to cluster around deep sea crevices, because that is where the source of life emerges.  And so, like everywhere else in the solar system, life abounds.

Neptunian porpoises look just like Earth porpoises except they are a little bigger and appear purple to our eyes.  They catch fish and also need to come up to the surface to breathe air…

…Now in the fullness of time, about three hundred million terrestrial years after the solar collision, a certain minute, hairless, rabbit-like creature, scampering on the polar grasslands, found itself greatly persecuted by a swift hound from the south.  The subhuman rabbit was relatively unspecialized, and had no effective means of defence or flight.  It was almost exterminated.  A few individuals, however, saved themselves by taking to the dense and thick-trunked scrub, whither the hound could not follow them.  Here they had to change their diet and manner of life, deserting grass for roots, berries, and even worms and beetles.  Their forelimbs were now increasingly used for digging and climbing, and eventually for weaving nests of stick and straw.  In this species the fingers had never grown together.  Internally, the forepaw was like a minute clenched fist from the elongated and exposed knuckles of which separate toes protruded.  And now the knuckles elongated themselves still further, becoming in time a new set of fingers.  Within the palm of the new little monkey-hand there still remained traces of man’s ancient fingers, bent in upon themselves.

As of old, manipulation gave rise to clearer percipience.  And this, in conjunction with the necessity of frequent experiments in diet, hunting, and defence, produced at length a real versatility of behaviour and suppleness of mind.  The rabbit throve, adopted an almost upright gait, and continued to increase in stature and in brain.  Yet, just as the new hand was not merely a resurrection of the old hand, so the new regions of the brain were no mere revival of the atrophied human cerebrum, but a new organ, which overlaid and swallowed up that ancient relic.  The creature’s mind, therefore, was in many respects a new mind, though moulded to the same great basic needs.  Like his fore-runners, of course, he craved food, love, glory, companionship.  In pursuit of these ends he devised weapons and traps, and built wicker villages.  He held pow-wows.  He became the Tenth Men.