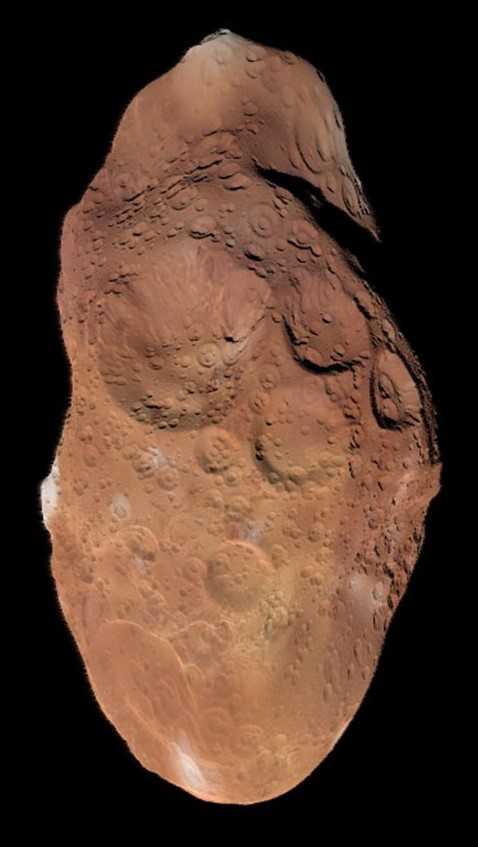 Otherwise known as Jupiter Five, the little moon Amalthea (mean diameter about 100 miles, but very irregular in shape) is nowhere near as important in literature as are the major Galilean Satellites - and yet, it has its own distinct place in Old Solar System lore.

He went to the big porthole and looked out.  The unworn, tumbled, monotonous surface of airless Jupiter V looked almost homey after the perpetual holocaust of Jupiter itself.  But there was an overpowering reminder of that holocaust - for through the thick quartz, the face of the giant planet stared at him, across only 112,600 miles; a sphere-section occupying almost all of the sky except the near horizon.  It was crawling with color, striped and blotched with the eternal frigid, poisonous storming of its atmosphere, spotted with the deep planet-sized shadows of farther moons...

You see, here's a perfect platform from which to see Jupiter.  Ah, but doesn't that detract from the moon itself?  Does its status as a viewpoint preclude all other possible character?  Not necessarily....

...Together they looked at the screaming straw yellows, brick reds, pinks, oranges, browns, even blues and greens that Jupiter threw across the ruined stone of its innermost satellite.  On Jupiter V, even the shadows had color...

There, you see: the mighty primary doesn't just draw all eyes towards itself - it also bestows the gifts of colour upon its little moon.  This, then, is one way in which we can view Jupiter's presence as an attribute of Amalthea.

Harlei:  It just goes to show that a world's sky, and the objects in that sky, are not just "beyond"; they're characteristics of that world.  I can pursue that point by quoting from a different story:

...Where they stood, they could see the dark broken rock of the satellite, jumbled for a short way beyond the landing slip and then chopped off sheer.  This moon was scarcely even a platform, it seemed, and cold constellations went streaming past it, around it.  Jupiter lay across a fifth of that sky, banded with colours, spotted with the shadows of planet-sized moons and with whirlwinds as broad as Earth.  If there had been any gravity to speak of, Cornelius would have thought, instinctively, that the great planet was falling on him.  As it was, he felt as if sucked upward, his hands were still sore where he had grabbed a rail to hold on...

Stid:  "Scarcely even a platform"... no gravity to speak of...  you know what, folks, I'd say your argument's wearing a bit thin.  Hardly a world, this.

Zendexor:  You should know better than that by now, Stid.  All over this site we find examples of ostensibly unpromising locations which are actually so sparky with forces of character-attraction that they amass identity like a piece of fabric can pick up pieces of felt.  Other tiny moons like Umbriel...  even smaller worlds like Phocea in Clark Ashton Smith's Master of the Asteroid...

Harlei:  And talking of size, Stid, we also have the permissive elasticity of the OSS with regard to sizes of the minor System bodies, especially in the outer System.  I'm thinking now of the sky of Thanator - that's to say, Callisto - where Amalthea is golden Juruvad, a "fleck of golden flame", every bit as impressive as the major moons.  See Renegade of Callisto, page 42.

Stid:  I accept your scholarly reference.  Now, what about life?  Sagas of native Amalthean cultures would make your case stronger still. 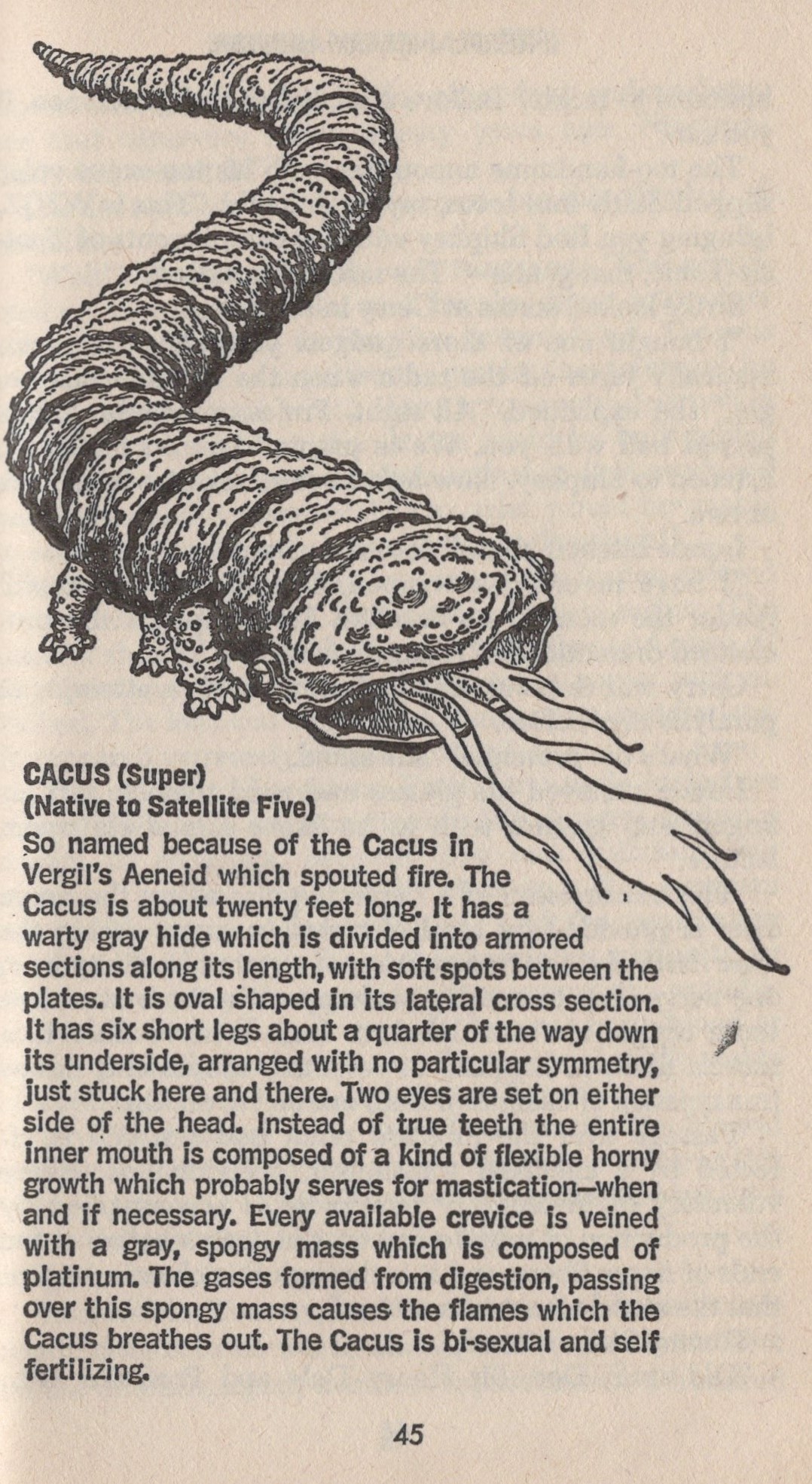 Zendexor:  Very well, I shall do my best to satisfy your requirements.  Here goes:

...There was nothing moving in sight on the fairly level plane, spawled off by Jupiter's fierce heat when the System was young, whose horizon was a scant mile away.  So they started walking.  Gravitation was surprisingly strong, indicating unusual density.  This fact, plus the intense cold which slows down the dance of the atoms, accounted for the fact that Five still retained remnants of an atmosphere.

The hikers even saw traces of water vapor, in form of frost.  Occasionally they passed clumps of mossy or lichenous growth.  Twice they observed colonies of slug-like creatures growing, reproducing, and dying with amazing rapidity...

And there's a big surprise waiting.  A civilization?  Or just a bigger type of creature?  Not quite either of those.  Hold on for something unique...

"So the Cacus is bi-sexual," said Gerry wonderingly.  "Self-fertilizing.  That's amazing.  And only one of them on the whole satellite!  That's really amazing."

Strike looked at her queerly.

"You don't grasp the truly amazing part of it - the Cacus' imperviousness to Leeds' and Machen's heat guns.  Don't you see, Gerry?  When Cacus number one was attacked by the heat-ray, it promptly transferred all its life and intelligence to the youngster in its womb.  But it also transferred the power of unbelievable adaptability, so when Cacus number two was born it was completely defenced against that heat-ray forever henceforth.

"It'd be the same for any other weapon we have for capturing an animal alive; it would simply let itself be born again fully adapted and protected..."

I won't go on and risk spoiling the story, but suffice it to say that the Cacus erupts into the plot with all the verve of a genuinely original notion, all the more delightful in that it comes from the pen of an obscure and mostly forgotten author.  Just goes to show what treasures await readers who delve into the arcana of the OSS.  Having said all that, we still haven't given Stid his Amalthean civilization.  Let's change authors again: 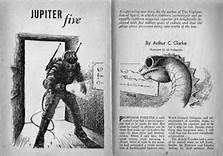 ...We landed three hours later on an enormous metal plain.  As I looked through the portholes, I felt completely dwarfed by my surroundings.  An ant crawling on the top of an oil-storage tank might have had much the same feelings - and the looming bulk of Jupiter up there in the sky didn't help.  Even the Professor's usual cockiness now seemed to be overlaid by a kind of reverent awe.

The plain wasn't quite devoid of features.  Running across it in various directions were broad bands where the stupendous metal plates had been joined together.  These banks, or the crisscross pattern they formed, were what we had seen from space...

Stid:  That's not fair - Amalthea as an artificial world, a sort of ideological prequel to Rendezvous with Rama, doesn't really count.

Zendexor:  Maybe it doesn't fully count, but on the other hand, couldn't one argue that a giant world-sized spherical ship which arrived in our solar system from interstellar space millions of years ago might reasonably count as one of our neighbouring worlds after it has been quietly domiciled here for all that length of time?  Come on, show a bit of tolerance for immigrant worlds.

If you can accept that, and if you're an OSS fan, you're immediately rewarded by a gem of a tale, written in the years when it was still possible to believe in OSS civilizations (for be it noted, Jupiter Five does contain intriguing cluff-sized references to native Martians).

I want to emphasize, I particularly like the tale's mixture of hard science with dreamy fascination.  It's so nicely credible in its own terms!  For example, see how the author deals effectively with the problem of how, in an age of space travel and space observatories, a mystery on such a scale could have remained unscanned by any prior observation at a distance, and instead could be saved up for an in situ investigation:

"...I've a friend at the Ganymede Observatory whom I've sworn to secrecy and who's been under quite a strain this last few weeks.  It's rather surprising to anyone who's not an astronomer that the Observatory has never bothered much about the satellites.  The big instruments are all used on extra-galactic nebulae, and the little ones spend all their time looking at Jupiter.

"The only thing the Observatory had ever done to Five was to measure its diameter and take a few photographs.  They weren't quite good enough to show the markings we've just discovered, otherwise there would have been an investigation before..." 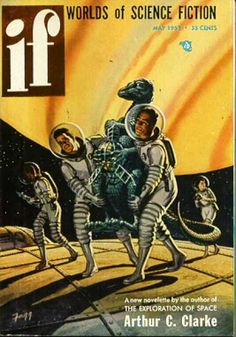 The tale is pure wonder with some likeable human characterization thrown in.  No death threats, no melodrama, no horror.  In Jupiter Five you get the unalloyed joy of discovery.