Uranus' darkest moon, and third in size behind Titania and Oberon, Umbriel has gained a place in Old Solar System literature. 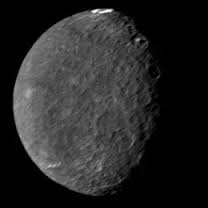 Zendexor:  An identity doesn't have to depend on a vast number of words.  How's this for a start:

..."That cursed moon Umbriel is a crazy jungle of the damnedest planetary natives ever heard of - the Greenies, fierce, half-human devils with ninety-odd weird ways of killing a man.  Even if you scrape through the umbron trips, the Greenies are likely to get you."

Zendexor:  Space voyages which have been made dangerous through carrying cargoes of "umbron", a radioactive material found on Umbriel, which plays havoc with spaceships' instruments.  Key to the plot of The Revolt on the Tenth World - the "tenth world" being a figurative phrase -

There were but nine planets - so outlaws and criminals who could call no world their home were called Tenth-Worlders.

So we're all set for shenanigans on this isolated Uranian moon.  It's the sort of tale that Hamilton does well.  And he doesn't repeat himself too much as far as Uranian jungle moons go - his Umbriel isn't just a double of his Titania.  You feel it's smaller and wilder.  You even feel the greenery on it is a more virulent colour.

Umbriel was now broadening out below.  Crane saw the small moon, only five hundred miles in diameter, as a curving convexity blanketed by thick, seething, steaming yellow-green jungle.  It looked ugly and repellent in the pale wash of sunlight.

Thin air whistled outside as the cruiser rocketed down obliquely around the moon.  A big scar on the ocher jungle showed ahead.  It rushed closer, revealed itself as a small, compact clearing hacked out of the vegetation, with chromalloy buildings on it...

Definitely a harsher environment than the same author's Titania which, you may remember, has a proper human settlement called Moontown and harmless, chattering, parrot-beaked humanoid natives.  Here on Umbriel the situation is more fraught. 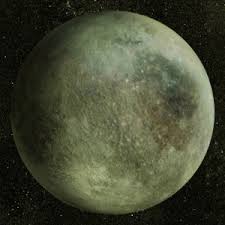 The sunlight was thin and weak, but the air was very warm from the core of radioactive matter that lay at the heart of this moon.  The ocher soil crunched under their feet.  In the brassy sky, the immense, dull-green sphere of Uranus bulged like an incredible moon.

Crane looked around curiously.  The whole clearing was surrounded by a strong steel stockade.  Beyond its outer side stretched the yellowish jungle - a crawling jungle, many of whose vines and snake-stemmed shrubs had the queer rootlessness and powers of locomotion characteristic of Uranian flora.  The larger trees, black trunks bearing masses of flat fronds, were rooted. 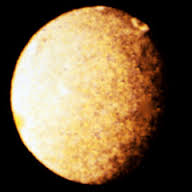 The north half of the clearing was scarred by open rock workings.  In them, laboring with picks and chisels, were some fifty semi-human, yellow-green creatures.  They looked like hybrid travesties of mankind, bipeds whose limbs and arms seemed quite boneless, and whose conical heads and pupil-less eyes were wholly alien.

"I thought the creatures were fierce and hostile to all visitors," Crane declared.

Whitey nodded.  "They're fierce enough - make no mistake on that.  May not have much brains, but they've sure thought up some sweet ways of killing.  But Vliet got round 'em by offering high pay, and though we don't trust 'em much, they haven't tried any tricks on us - lately."

"Vliet pays those creatures?" Crane repeated incredulously.  "What the devil would they do with money?"

Whitey cackled, "Vliet don't pay 'em money.  He pays 'em in broken glass.  You see, they've got an idol back there in the jungle they worship - a big fallen meteorite that happens to look something like a head - and they labor here in regular tricks just to get beautiful pieces of broken glass to offer to their crazy god..."

Harlei:  Let me add just a little bit to this page, Zendexor.  I have here a slightly different account of Umbriel, by the same author; a glancing mention in a story most devoted to a different world - his 1945 tale Trouble on Triton.

Zendexor:  Go ahead; we can always assume it's referring to a different part of Umbriel than the one discussed above.  If the difference isn't too great.  I mean to say, there are wide differences on Earth, after all.

Harlei:  Just what I was hoping you'd say!  Here goes, then.

Rice looked up eagerly, a youngster who was serving his first hitch in the planet-service and still getting a kick out of it.

"It sure is - a hair-raising drama of life on Umbriel."

They had the Livie receiver going and each of them wore the flat headpieces of the individual receptors.

Carter smiled bitterly as he sat down.  A thrilling Livie drama about adventure in the planets - that was all he needed right now.

But he reached for the fourth headpiece and slipped it over his head, the flat induction coils pressing against his skull.  He closed his eyes.

Instantly Carter was in another man's body, in another place, on another world.  He was standing in the lush red jungles of Umbriel, moon of Uranus.  He gripped an atom-rifle in his hand as he moved steadily through the giant red fronds.

Carter could see every detail of the crimson fronds and pale flowers around him.  He could smell the heavy scent of the blossoms and the rank breath of rot, could hear the rustling of the breeze, could feel the soft mould under his boots and the smooth grip of the rifle in his hand...

Stid:  No problem, Harlei!  The yellow-green Umbrian vegetation of the first story turns red in a certain season of the year, to give us the scene in the second story!  If the foliage of New England can do it, so can the jungle of Umbriel!

For the change in Hamilton's portrayal of this Uranian moon from the 1940s to the 1950s, see Umbriel's fade-out.