Uranus' largest moon, Titania has made some detectable mark upon the literature of the Old Solar System.

Stid:  Enough to justify a page?

Zendexor:  Just watch this space.  Surprising as it may seem, not only do I have enough material to form a page, but I find some signs of a consistent personality emerging for this distant little world.

The hero of Salvage in Space comes across the floating remains of an ill-fated expedition to Titania.  He examines the scattered entries in the deserted ship's log.  At first they deal with matters such as preparations for the voyage, then the long months of the trip through space, as far as Uranus "where they could not land because of the unstable surface". 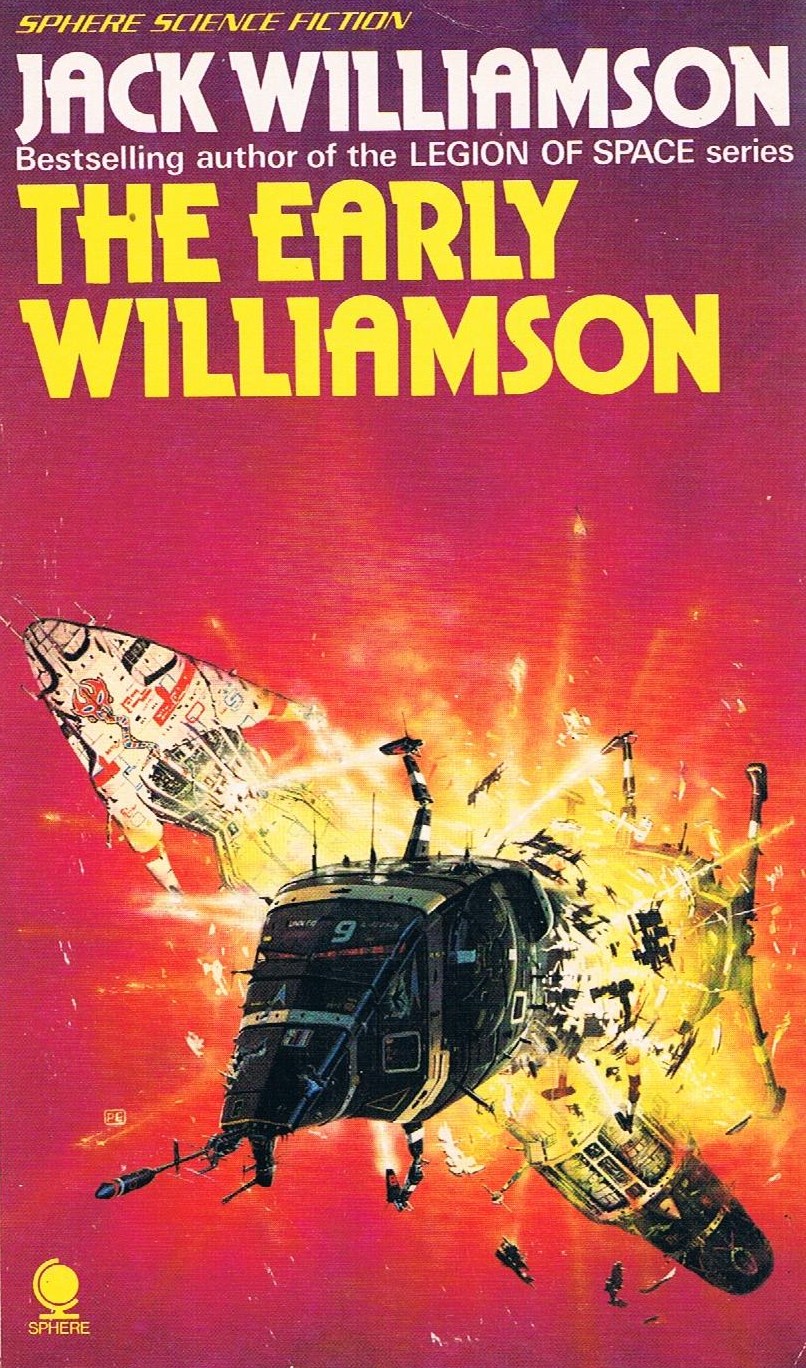 ...The remainder of the entries Thad found less frequent, shorter, bearing the mark of excitement: landing upon Titania, the third and largest satellite of Uranus; unearthly forests, sheltering strange and monstrous life; the hunting of weird creatures, and mounting them for museum specimens.

Then the discovery of a ruined city, whose remains indicated that it had been built by a lost race of intelligent, spiderlike things; the finding of a temple whose walls were of precious metals, containing a crystal chest filled with wondrous gems; the smelting of the metal into convenient ingots, and the transfer of the treasure to the hold.

Some of the men say we shouldn't have disturbed the temple.  Think it will bring us bad luck.  Rubbish, of course.  But one man did vanish while they were smelting the gold.  Poor Mr. Tom James.  I suppose he wandered away from the rest, and something caught him.

The few entries that followed were shorter, and showed increasing nervous tension.  They recorded the departure from Titania, made almost as soon as the treasure was loaded.  The last was made several weeks later.  A dozen men had vanished from the crew, leaving only gouts of blood...

Now for an interesting variation.  An account by another author.  Different but not completely so.  Echoes remain, and we get overlaps and extensions to the vision... 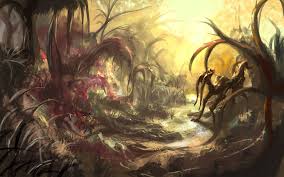 It was almost completely dark by the time they crossed the spaceport and started along the short road through the jungle to the town.  The damp air was heavy with rank scent of the dense forest of fern-like trees.  Queer "floating flowers" drifted against their faces, leaving lingering traces of exquisite perfume.  Far off in the jungle a tree-cat wailed blood-chillingly, while overhead in the darkness was the leathery rattle of a passing dragon-hawk's wings.  Moon-bats called screechingly.

The stars blazed brightly down upon them.  But over at the east horizon there was a ghostly uprush of green light from behind the horizon.  It waxed stronger by the minute.  Then the colossal green shield of Uranus pushed up into the sky, filling half the heavens as it poured down viridescent brilliance like an incredibly huge emerald moon...  [Treasure on Thunder Moon, p49-50]

You see - forests and strangeness, both times.  A sketchy personality of Titania is emerging...  ripe for further development by an OSS retro-author.

Now for a third source, developing the strangeness, to include the unusual appearance of Titania as the little world is approached from space:

"...I imagine the landscape will be bathed in a curious negation of light, a darkish redness as thick as clotted blood.  The Martian expedition reported a curious stratification of the atmosphere.  It's probably like the curdy vapor envelope of Jupiter."   [Red Moon]

And indeed the fugitives from the Martian tyranny find that their oppressors were right about this unusual satellite:

...The glowing circumference of Titania... was breathtaking in its nearness, a miracle of weaving, filmy light.  Luminous filaments of malachite and rose snaked across its rubescent convexity, dividing it into segmented zones...

But some surface features are nevertheless visible from space:

Emerging into symmetrical relief were dark, domelike elevations.  Unlike the mountains of Earth, they were sharply circumscribed around flattened areas where utter darkness reigned...

The difficulty is, one is apt to land in a gigantic "ripple-curd": but fortunately, the things can't stand noise...  All in all, an interesting place!