The only large moon of Neptune, Triton deserves a personality and a niche of its own in the literature of the Old Solar System.

Stid:  And does it get what it deserves?

Zendexor:  Only in three works, that I know of.  And they're difficult to reconcile.

Stid:  That's unfortunate - though I'm sure you'll give it your best shot.  And if all else fails you could put out a call for help - 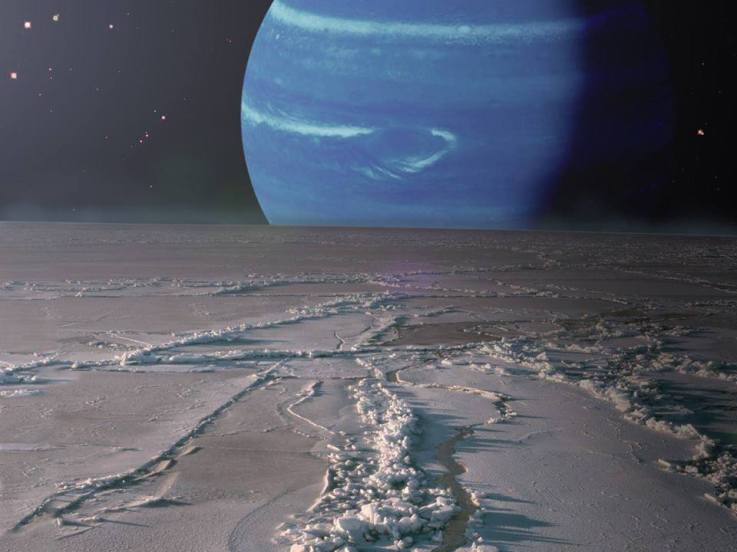 Zendexor:  And in the meantime, while we're waiting for retro authors to catch up on their duties, let me point out what we do have -

First, we can extract a quite impressive Tritonian adventure from just a few pages in Captain Future's Challenge.

watch what you think

...Triton was not an ocean-world like its parent planet.   The moon was covered with rolling green plains and seemed a peaceful, inviting place.  Yet Captain Future was the only person in the whole system who ever dared to land on that innocent-seeming world!

"The queerest city in the System," growled Otho.  "A city without buildings."

"The Tritonians are too far advanced mentally to have need of material buildings," commented the Brain in his rasping voice, his lens-eyes peering keenly.

The Tritonian "city"  was nothing but a great smooth metal platform of circular shape, several miles across.  The Comet landed nearby.  Curt and the Futuremen emerged, Grag carrying the Brain.  As they stood in the thin sunlight, they became conscious of a tingling force pervading them.

"That's the devil of this place!" complained Otho.  "You think of something like a Plutonian ice-tiger, and right away - "

For as Otho spoke the words, the very beast he had mentioned appeared suddenly out of thin air beside him, miraculously solid and real...

It takes some adjustment, but the lesson is learned.

"Keep your thoughts on flowers and birds and things like that," Curt chuckled.  "Come along."

As they moved toward the nearby metal platform of the Tritonian "city", brilliant flowers and flashing birds and wonderful jewels appeared magically all around them, all of them solid and real but all vanishing as they thought of something else.

The scientific magic of the Tritonians was responsible for this weird experience.  For the Tritonians had learned how to cause a zone of pervading force through which the electrical vibrations of the thinking mind instantly operated.  Whatever tangible object the mind thought of was instantly created solid and real, by an amplification of electric mental currents operating to assemble free atoms.  As soon as the mind ceased thinking of the object, control broke down and the object dissolved instantly into free atoms once more.

Interplanetary travelers had had such appalling experiences on Triton that they all shunned this world now.  Only Captain Future had been able to win the respect and friendship of the strange Tritonians...

Stid:  I take it that we aren't going to discuss Samuel R Delany's book.

Zendexor:  Right, we're not.  It was published in 1976 and although that still leaves us with the excuse that Voyager had not yet reached Neptune - so that any 1976 Neptunian tale could still be labelled OSS - it's obvious from reading about Delany's book, that its concerns are light-years away from classic OSS.  It's just not likely that it will chime in with the mood of this site.

(Having said all that, I do love his far-future Fall of the Towers trilogy... can't resist mentioning it, irrelevant though it is to this page.)

Stid:  So - have we said all we can say as regards Triton in novels? 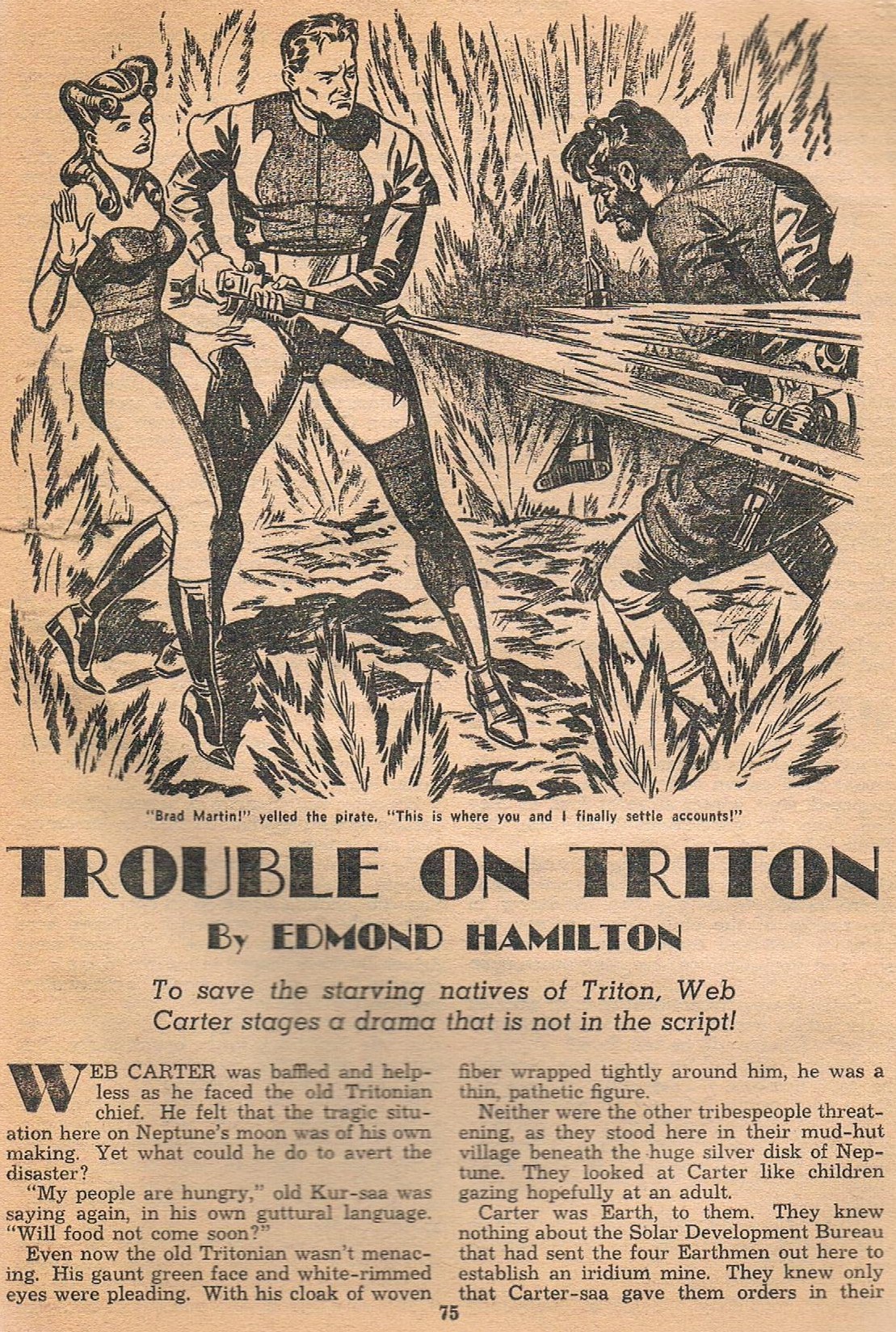 Zendexor:  Yes, which leaves us with novellas and shorts.  Back again with Edmond Hamilton we'll now look at a story written five years after the Captain Future adventure discussed above.  Trouble on Triton depicts that moon in a different way altogether from the version in the earlier tale.

We're in a raw, primitive situation.  Web Carter, iridium miner working for the Solar Development Bureau, sympathises with the natives who have been left destitute by Terran double-dealing.

He protests in vain to the Bureau:

"You're evacuating Triton - abandoning the mine?" he cried.

"Orders, old boy."  Rewer smiled.  "Sorry to do it, but Ganymede is producing more iridium than we need, and it's much nearer.  You and your men will be given good posts elsewhere, of course."

"That's not what I'm thinking about!" blazed Carter.  "What becomes of the Tritonians when we leave here?"

Rewer looked puzzled.  "The natives?  There's nothing to be done about them.  They received their pay for their work, didn't they?"

Carter choked down the wrath boiling up in him.  He tried to speak slowly and calmly, to make the situation crystal clear.

"It's not a question of what they received.  The point is that they made no provision for winter because they relied on us.  If we abandon them to starve, they'll be driven to suicidal extremities."

Rewer looked annoyed.  "I really don't see that it's our problem.  After all, the Tritonians lived very well before Earthmen came."

He didn't understand, Carter saw.  Nobody on Earth could comprehend the meaning of a Tritonian winter...

The "suicidal extremities" involve hunting the monstrous Crawlers in the reed marshes.  Reliance on Earth meant that the Tritonians had not tended their usual fungus crop - so the only remaining source of food was the Crawlers.  Kur-saa, the village chief, reiterates this to Carter.

"Yes, this is the responsibility of us Earthmen, Kur-saa," said Carter.  "We took you out of your own way of life and now we're deserting you to starve.  That's why I am going to hunt with you tonight."

Kur-saa made a gesture.  "Then come."

A wail went up from the women of the village as the little troop of tribesmen moved out through the dusk eastward.  They tramped straight east for half an hour before reaching the edge of the great marsh.

It stretched black and evil beneath the planet-glow, a dark, reedy wilderness whispering in the wind.  Here laired those amphibious monsters that had made Triton's swamps dreaded.

"We shall beat southward through the reeds in a line," Kur-saa whispered.  "When a Crawler is started, all must attack it.  If more than one, split up and stab from all sides.  Some spears will reach them."

Carter's heart pounded as he went forward with them through the reeds.  Icy water and mud were to his knees, saw-edged reeds tore at him.

They had gone a hundred yards when an explosion of movement, a monstrous bulk rearing and a thick, throating bellowing broke from his right.  He glimpsed the gigantic upraised worm-head, horns glittering in Neptune's light and its pale, flaming eyes peering...

Zendexor:  Yes, but apart from the natives-versus-Terran-exploiters theme, there's a third element to this story which I have not mentioned.

Entertainment!  A "Livie" Films Company are coming to Triton with their transmitter-helmets to make one of their phony adventure-episodes of interplanetary romance.

The "Livie" filmers are as lacking in empathy as the Solar Development Bureau.  But they unwittingly enable Web Carter to turn the tables on the exploiters with remarkable neatness.

Trouble on Triton is a pure little gem of a tale, simple but satisfying, typical of the kind of thing Hamilton did so well.

Stid:  Just as well he did, if no one else has bothered.

Zendexor:  Ah, but there is one other... listen to this. 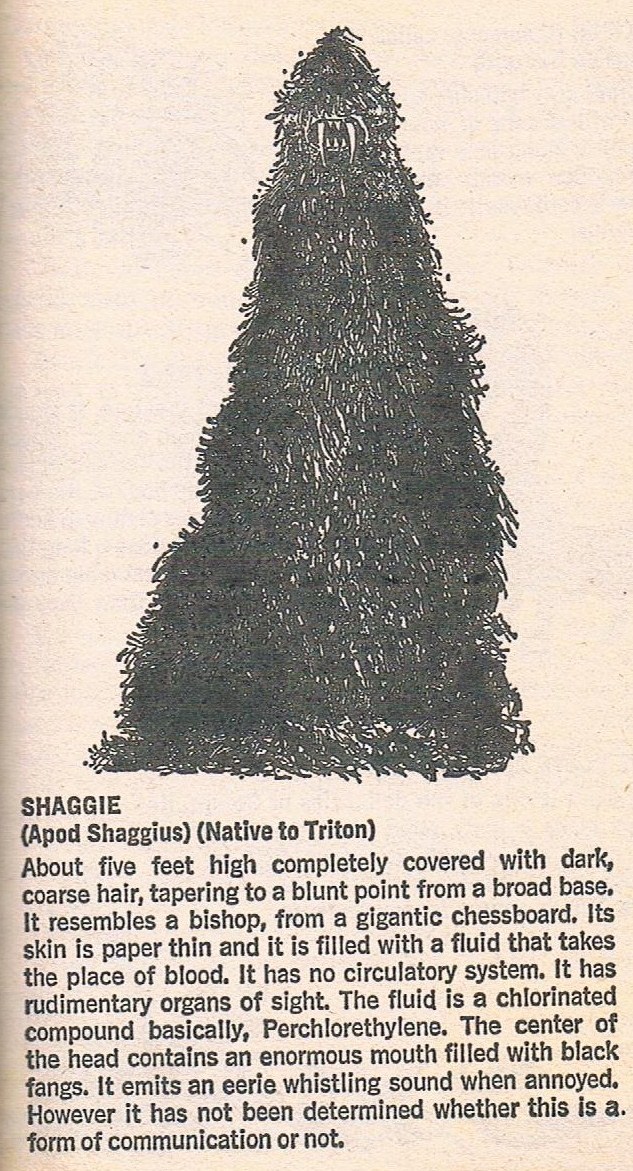 ...Thirty yards away, something new had been added to the landscape - a five-foot high Thing covered completely with dark, coarse hair, tapering to a blunt point from a broad base.  It somewhat resembled a black, furry bishop, strayed from a gigantic chessboard.  The Thing stood utterly motionless in the grayness, as they watched.  Though apparently without features, it somehow gave the feeling of watching them in intense curiosity...

Harlei:  This is the stuff!  And the environment of the Thing - does that come up to scratch too?

Zendexor:  Mmm... You'll have gathered by now that we're discussing one of the Gerry Carlyle stories in Interplanetary Hunter, a collection most notable for its fauna.  Settings are adequate to support the stories, but don't look for cultural adventures as in C L Moore or Clark Ashton Smith.  Barnes' merits are different.  You're asking about his Triton considered as a place.  It's certainly distinctive, but being a smooth, high-gravity world -

Zendexor:  OSS writers are known for their... er... gravitic licence.  That's to say, they are allowed to endow their less well-known worlds with high gravities, if the plots of their tales require them, even though the masses required are ruled out by the known movements of solar system bodies.  Here for instance we just have to accept a Triton with a pull of two point five gees.

This being so, we are left with another problem, which you, Stid, will doubtless pounce on.  Listen to this:

...They drew lots for the six space-suits, and presently the winners poured out upon the surface of Triton like school children at recess.  McCray and Kranz promptly staggered tipsily and fell down.  Strike and the other men lurched and scrambled and finally remained upright in very weird positions, as if leaning against a gale...

Stid:  At two-and-a-half gees?  Are we being kidded?

Zendexor:  In this tale, the world's extremely rapid rotation counteracts the force of its gravity, but the whole thing is so outré that it is hard to fit in with other Tritonian stories.

Stid:  Which is where I - as you put it - "pounce".  I honestly don't see how you can make a gestalt out of the three tales you've mentioned on this page.  Their setting share the name "Triton" and no more.

Harlei:  Not so, Stid.  They share something else - the sense of remoteness.  A frontier feeling...

Zendexor:  But Stid will merely point out that there are many worlds in the outer solar system equally remote in emotional and practical terms.  No, we must rely upon another defence, in our attempt to uphold an incipient build-up of Tritonian character...

Let's say, for the time being, that it's a work in progress.  Think back to Captain Future's Triton, and to its "whatever-you-think-becomes-real" theme.  Maybe that's the key to it.  Many separate Tritons are flowing, as yet in separate tributaries, toward a future thematic union - because we think they are.