what to see on
triton 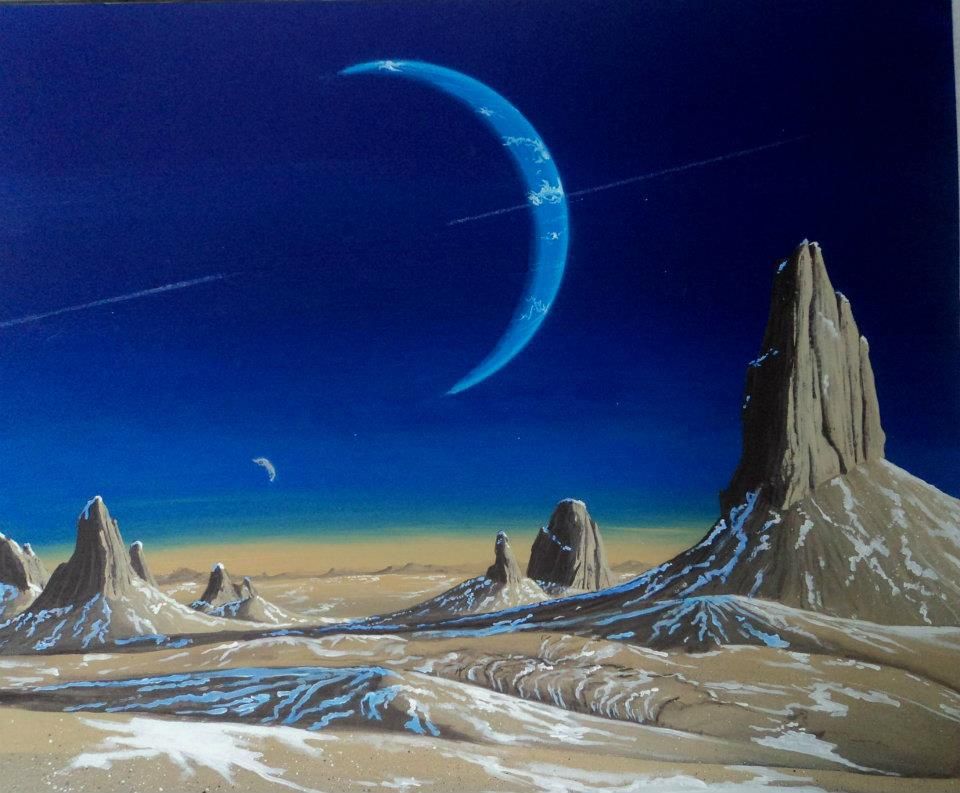 "...The children grow weak, from hunger.  There us but one recourse left us.  That is to hunt Crawlers."

Carter was dismayed and stared at Kur-saa in horror.

"Hunt Crawlers?  Kur-saa, you know that's suicide.  If you go into those marshes and try that - "

"There is no other way."  The old man shrugged hopelessly.  "Some of our young men are scouting the marshes now.  If they find - "

Carter's heart sank at what he saw...  from the direction of the great reed-marsh eastward, came a small group of young tribesmen carrying two limp burdens.

They put them down.  A chorus of heart-broken wails came from the women.  Carter stepped forward and took a look and then turned away, a little sick.

He'd seen men before who had been caught by the Crawlers and pulped.  But it was still a stomach-churning sight.  The two corpses were just skeletons with skin round them.  When a Crawler caught a man and pulped him, every bit of blood and tissue was sucked out of him...

robbing a temple on triton

…Cautiously, he wiped the snow off the single enormous eye that occupied the centre of the idol’s forehead.  The eye flashed fire at him; blue-white, transparent, lustrous as a diamond.  It had been cut, diamond fashion, in many facets, to resemble the many-lensed, insect-like eyes of the Tritonians themselves.  The eye was set in a band of cement.  Larsen tested that cement with a chisel.  He cursed.  It was almost as hard as the bort from which the idol had been hewn.  He dared take no chances on scratching the Eye.  He turned on his torch full blast, and began to cut into the bort around the cement, careful to keep the flame away from the Eye.  Sudden heating might crack that mysterious stone.

Larsen worked feverishly, forgetful of time, sweating despite the chill, until he felt a draught on his back; a cold that bit through his space-suit to his very marrow.  Snowflakes were swirling around him.  The dawn-wind, blowing through the hole in the door!  On Triton, the hydrogen atmosphere froze every night.

From either side, winds rushed in to fill the vacuum, but themselves froze before they had gone far.

The Eye seemed loose in its socket.  Larsen turned down the torch.  Cautiously, he grasped the cement.  The Eye came away in his hand.  He was used, by now, to the low gravity of Triton, but the lightness of the stone surprised him.  It seemed as light as pumice.

Larsen looked up just in time.  The Tritonians were stirring!  The wind, so cold to him, was warm to them; it meant air to them.  Those great pale eyes – one to each Tritonian – were fixed on him, glaring with a phosphorescent luster.  There was no expression on their gargoyle faces.  Their cavernous mouths gaped open; toothless, but rimmed with razor-sharp horn, like the jaws of a snapping turtlel. The snow dropped from them; their lobster-segmented shells were dull black, like the bort of the statue.  They were closing in on him.  He could not tell their numbers; behind those visible, more kept crowding out of the shadows…

An hour later they were there, slanting down over a terrain of desert and serrated cliffs. The great ball of Neptune hung behind, filling half the sky, its glow casting just enough light over the satellite to tinge everything with a greenish grotesquerie.

"Lord, that gives me the creeps!" Blake muttered, peering out.

"This little planet must be pretty heavy, though," Janus estimated. "Gravity seems about right."

They passed beyond the cliffs and over a large desert. Then, far ahead, they saw the towering stone edifices of a city, gleaming a ghastly skull-white in the green tinged atmosphere. Devries turned his face away. He recognized the city from the Martian's description.

Before they quite, reached there, however, Blake cried: "Look! Down there!"

Far below them, covering a large section of desert, were row after row of blunt-nosed objects, looking like tiny silvery bugs, except they were motionless. But they weren't bugs. They were space-ships. Hundreds, perhaps thousands of them in formidable array.

Ketrik stared, then turned to Devries and exclaimed: "Hah! Thought you said these Proktols stuck close to home! Off-hand I'd say they've got other ideas now. I wonder what? I don't like the look of that fleet down there!"

But now their spacer was gliding in low over the city, settling down into landing cradles.

Janus turned to his men. "If we see a chance, we'd better make a break for it! I'd like to get at the Controls of this ship just once!"

But they had no chance to do either. A score of the Proktols, with flame-pistols alert, came to escort them out. As they marched down a wide avenue thousands of the gathered populace gave vent to prolonged shouting, or rather shrilling. It was definitely unfriendly, and somehow fanatical, anticipatory.

The Earthmen looked at these inhabitants with interest. They seemed to be Proktols too, but in several ways were different from V'Naric and the others. They were smaller, hardly four feet tall, and frailer if that were possible. And they had no antennae. Neither did they wear any raiment that the Earthmen could see—evidence of their semi-savagery. But they seemed to respect the larger Proktols, for although their shrilling continued, they kept their distance and didn't touch the Earthmen.

"Just listen to those devils!" Blake said. "They're waiting, expecting something!"

They reached a vast plaza in the center of the city. Their captors marched them through the mass of shrilling little coppery devils, and into a building; then up a flight of stairs and into a bare stone room with a single tiny window looking out upon the square below...