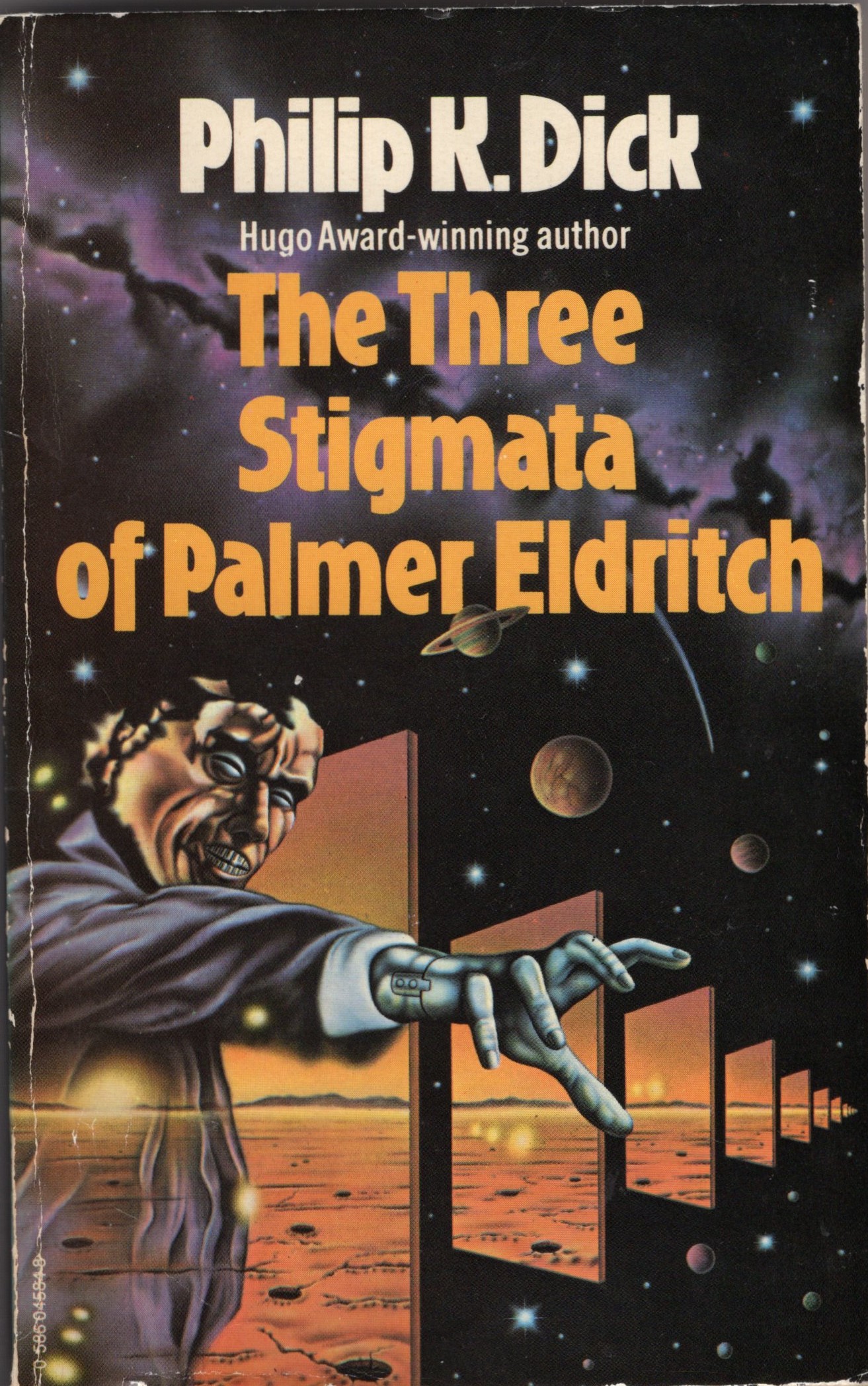 A challenging page, this - and not just in the usual sense, of the need to do justice to a great author, but also -

Stid:  But also you're nagged, aren't you, by the suspicion of irrelevance?

Let me put your problem bluntly, Zendexor.  The awkward fact is, PKD just uses the OSS as a set of props; his heart really isn't in it.  He light-heartedly fools around with Callistan cuddle-bugs and whatnot, merely to give the reader an occasional comic breather from the heavy, dark themes that dominate his work.  Hence his deathless throwaway line (in The Three Stigmata of Palmer Eldritch),

"...Finish your Ganymedean wap-frog croquette and let's get back to the office."

Zendexor:  "Throwaway" it certainly is, and that's the strength of your case, Stid - a line of argument which I plan to shoot down in flames, but first let me concede that Dick's work might well seem richer in mere CLUFFs than in proper OSS adventure.  I've actually been having a good time picking out CLUFF after CLUFF during my current Dick-rereading phase... all teasingly quaint, and all, by definition, not followed up.

Harlei:  Don't agree with him too much, Zendexor.  Else you'll leave yourself without enough room to argue that PKD is a world-builder after all.

Zendexor:  And can you go that far?

Harlei:  In certain moods, yes; for example when I step back from The Game Players of Titan and realize that the book has given me a strong sense of the "vugs" of Titan and their world and culture.  Quite an effect; just made up of hints, admittedly, but when I'm in a receptive mood, a hint can be enough.

Powerfully so, in fact, in the scene that begins with how the vugs view us, before proceeding, by contrast, to show us how they view themselves:

...below her, she saw something that lived.

Stunted, alien creatures, warped by enormous forces into miserably malformed, distorted shapes.  Crushed down until they were blinded and tiny.  She peered at them; the waning light of a huge, dying sun lit and relit the scene and then, even as she watched, it faded into dark red and at last utter blackness snuffed it out once more. 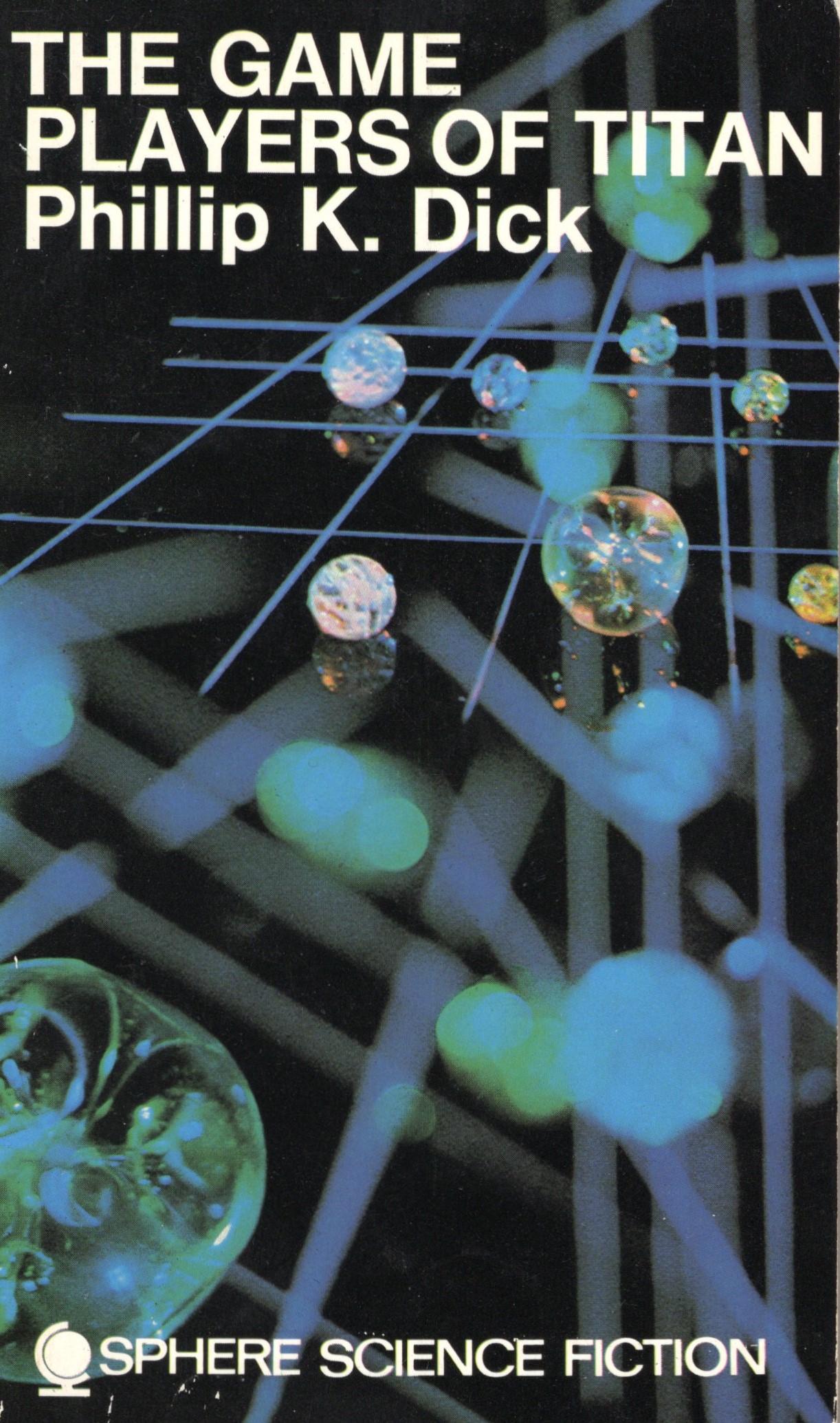 Faintly luminous, like organisms inhabiting a vast depth, the stunted creatures continued to live, after a fashion.  But it was not pleasant.

That's us.  Terrans, as the vugs see us.  Close to the sun, subject to immense gravitational forces.  She shut her eyes.

I understand, she thought.  No wonder they want to fight us; to then we're an old, waning race that's had its period, that must be compelled to abandon the scene.

And then, the vugs.  A glowing creature, weightless, drifted far above, beyond the range of the crushing pressures, the blunted, dying creatures.  On a little moon, far from the great, ancient sun.

You want to show us this, she realized.  This is how reality appears to you, and it's jusst as real as our own view.

Do you grasp that? she asked the glowing, weightless presence that was the spiraling Titanian.  That our view of the situation is equally true?  Yours can't replace ours.  Or can it?  Is that what you want?"

She waited for the answer, her eyes squeezed shut with fear.

"Ideally," a thought came to her drily...

Stid:  I'll concede that the above does amount to somewhat more than a CLUFF, and that you, Harlei, spread the little set-piece scene's influence over your enjoyment of the novel as a whole.  However, the excerpt you quoted still remains just one little scene.

And notice, please, that even in this one little scene, the alien vista is merely sandwiched, as it were, inside a philosophical point.  I stick to what I say: PKD's heart isn't in the OSS for its own sake. 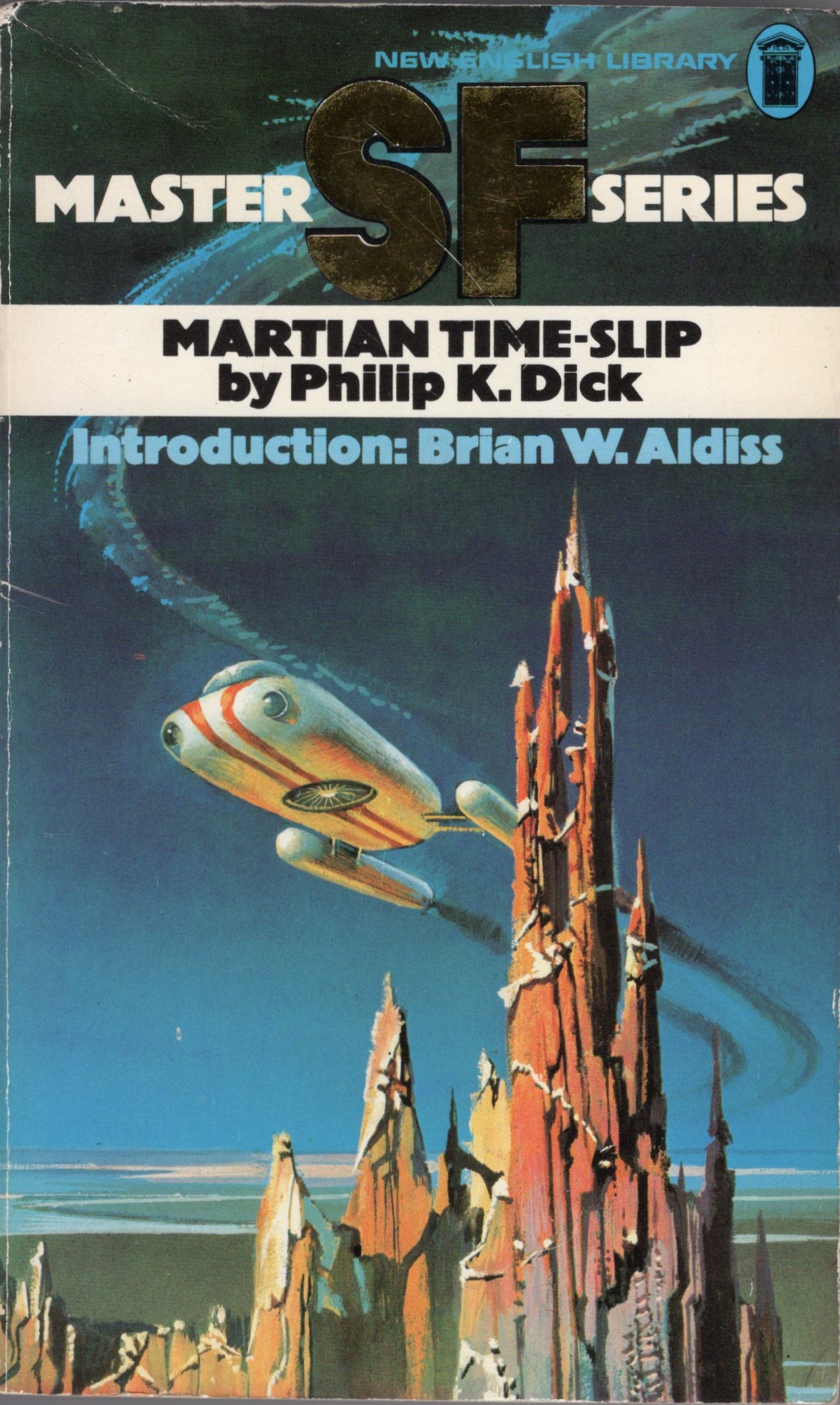 So, folks, why flounder around in you're doomed attempt to centre a page upon this author's OSS relevance, when actually the OSS is not at all what he's famous or remembered for?

Zendexor:  I have made the point elsewhere, that Dick is a world-disturber, not a world-builder.  He is primarily interested in our culture and the weirdness it's heading into.  Therefore, it does indeed follow, that anything to do with other worlds is apt to be merely symbolic.  Either the other-worldly scenes are mere cluffs or they are at any rate philosophically subservient to some cultural concern about where the pressures on us are taking us.

But - here's where my counter-attack begins - he does it with such effectiveness and exuberance, that it can warm the cockles of one's heart.  Even the mere CLUFFs can do their bit to colourize the catchment volume whence come the pressures upon our fate.  What it all amounts to is not so much comic relief, as zestful relief - by which I mean to say, that one important role for the SF props in Dick's work is to help make his sinister vision bearable to the reader.

If you doubt this, consider one Dick novel that lacks those props: A Scanner, Darkly.

Stid:  One of his most highly thought-of books, in mainstream criticism, from what I hear.

Zendexor:  And one which I have have never been able to finish.  Point taken, I trust.  Dick is at his best when he achieves a balance between his extravagant and his serious aspects.  If you sympathize with the fine line he must tread for this purpose, you'll more easily accept the apparently ludicrous mis-match between his pulpy planetary un-realism and his ultra-modern socio-political and existential concerns.  The one helps us through the other.

Harlei:  And they enable PKD to pull off the trick of being both heavy reading and light reading at the same time.

Stid:  In other words, what you're both implying is, Dick's merry sf props are sugar coating to help readers swallow the pill of his dark philosophy.

Zendexor:  Yes.  No.  Not sure I need admit what you're trying to get me to admit - that the relation of props to ideas is as artificial as "sugar coating".

In fact, here's where my counter-attack takes another crucial step. 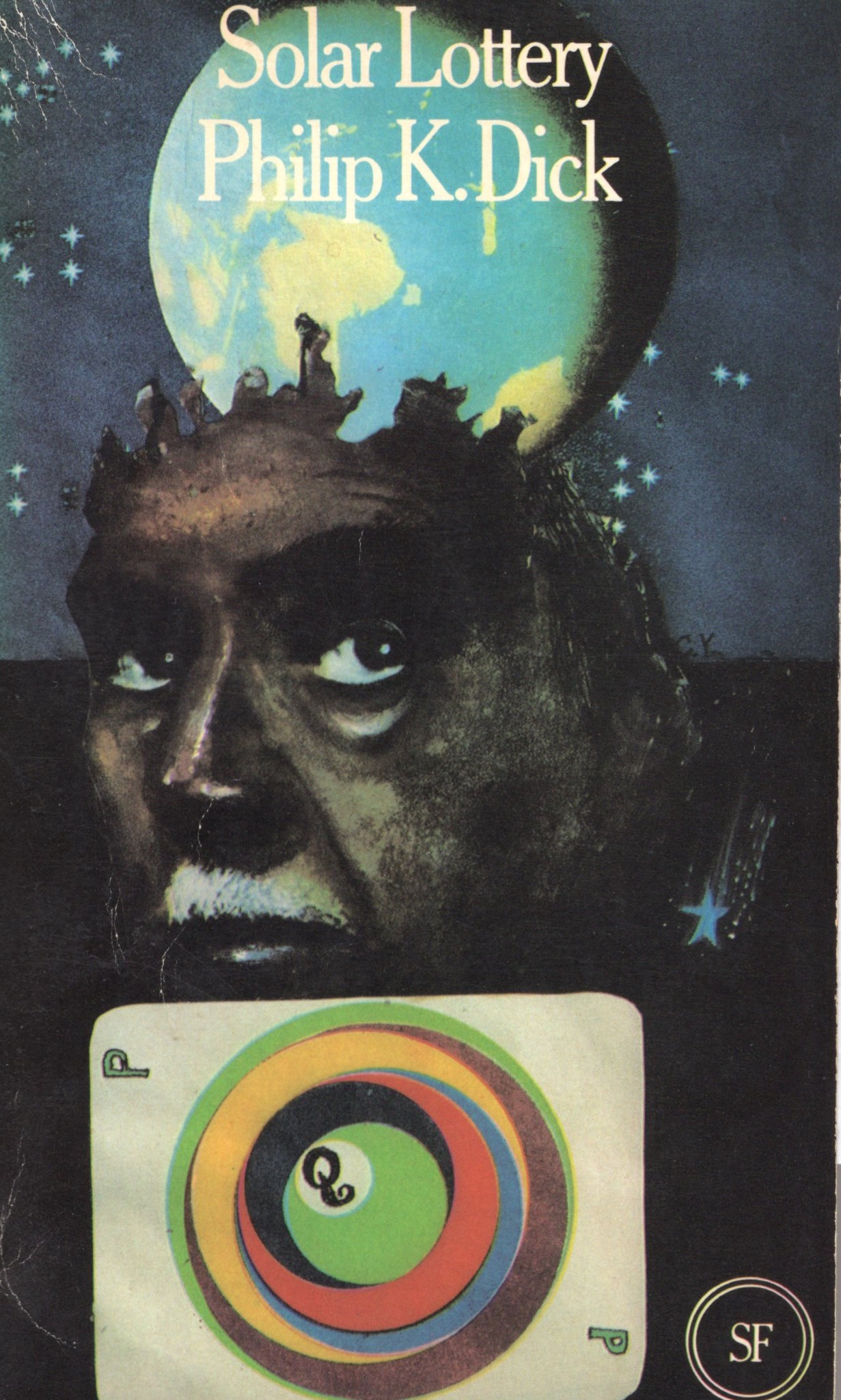 Listen to this.  I present you, not Dick the chronicler of self-destructiveness, philosophical angst and doubts about reality, but - Dick the outdoorsy pioneer!!

Yes, believe it or not... for such a culturally pessimistic author, Dick does surprise by his positive support for the colonization of the Moon (in Time Out of Joint) and of Mars (in the last part of Three Stigmata, when Mayerson decides to make a go of it...  all right, before you open your mouth to object, I'll admit that some months ago in the Diary I did have a grumble about PKD's negative attitude to Mars in the previous scenes in that book).

Stid:  And now you're going the other way and exaggerating Dick's positive hopeful side.  To me, he's like a medieval painter who enjoys painting devils more than saints in a fresco of the Last Judgement; he reserves his greatest gusto for the downbeat.  But maybe there's some macabre fun in this.  Mapping out a colourful Zothique of the sociopolitical scene, as it were.

Zendexor: I'll admit that when he isn't using his Solar System as a symbolic frontier of human endeavour, he's alternatively using it as a kind of Botany-Bay-style penal settlement.  Sure, it can go either way, but perhaps that's inherent in a frontier.  Anyhow, be it noted, Dick was not cynical about space exploration, either in real life or in his books.

Which brings me finally to the two strongest items in my defence of PKD's OSS credentials.

One is the extraordinary "Flame Disk" sub-plot in his first novel, Solar Lottery (discussed more fully on the page devoted to Planet X).    Followers of a crankish sect narrowly manage to escape the powers-that-be, and succeed in their mystical search for a Tenth Planet.  Usually, the sense of discovery in Dick's plots comes from investigations and revelations about what the heck is going on, rather than about what's to see "over the next hill", as it were.  That is to say, the thrill in his books usually comes from conceptual breakthroughs (as in Time Out of Joint), rather than from physical discoveries - but the Flame Disk is a haunting exception.

The second example I am about to cite is an even fuller exception.  In its level of detail and concentration on the topic of pioneering, it's unique, in fact, in the whole of PKD's oeuvre.  And yet it's not out of character at all. 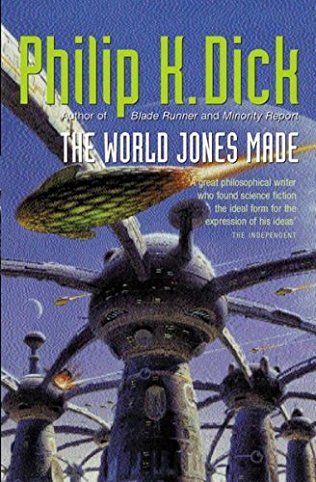 ...The impact wiped out his thoughts.  And for a long time, how long he never knew, there was simple nothingness; no world and no self, only empty nonexistence.  Not even the awareness of pain.

The first sensation that returned was that of weight.  He was lying in the corner, and his head was ringing.  Clanging like a great church bell, and slowly wheeling round, his head drifted sickeningly.  The chamber was a shambles, crumpled in as if some Behemoth had trod on it.  At one point, the ceiling and the floor met.  Pools of liquid, probably insulating fluid, poured from broken wall-pipes.  Somewhere in the half-darkness a mechanical repair car was ludicrously fussing with a rent in the hull as large as a two-storey house.

Well, that was it.  The ship had been ripped open like an over-inflated bladder.  A dense, fragrant, steaming fog was already billowing in from outside.  The ambulances would arrive to find them dead...

The crew of the crashed ship expect to die because, in the "Refuge" they have inhabited so far - a big cage-like enclosed habitat on Earth - exposure to the outside means death.  They have been kept in ignorance of the reason for this - which is that they are biologically altered human beings, adapted not to Earth but to their planned destination, Venus.

Following the above account of the crash, we are given what is, to me, one of the all-time delights of classic sf: namely the beautifully imagined scene in which the adapted folk crawl despairingly out of their smashed ship and realize, wonderingly, that they are not going to die after all - that they have, instead, reached a world they can properly inhabit.

The World Jones Made is replete with situational irony, but it also achieves straight OSS adventure in the final episodes of the Venus project.  Here the arc of Dick's imagination fully converges with our Solar System heritage.

...The scene was unbelievable.  For a time neither of them could grasp it.  "We're back home," the boy murmured, dazed and confused.  "Something went wrong.  We went around in a circle."

But it wasn't the Refuge.  And yet it was.  Familiar hazy hills spread out, lost in billowing moisture.  Green lichens grew everywhere; the soil was a tangled floor of lush growing plants.  The air smelled of intricate organic life, a rich, complex odor, similar to the odor they remembered but, at the same time, far more alive.  They gaped foolishly: there was no delineating wall...

For parallelisms with Olaf Stapledon see Solar System of Ideas.

For more on Solar Lottery and the Flame Disk see the OSS Diary for 21st August 2016.

For The World Jones Made see the OSS Diary for 9th September 2016 and the
extract, Modified humans find their true home on Venus.
See Is Dick for or against the final frontier? for Dick and space expansion.
On that same topic, see the Diary for 10th November 2016 for
the negative view of Mars in The Three Stigmata of Palmer Eldritch.
See also various fictional dates in the 1990s.

You will find quite a few references to PKD's works on the Fictional Dates page.