America's built environment, its colossal infrastructure, offers perfect soil for the myths of a post-industrial future. 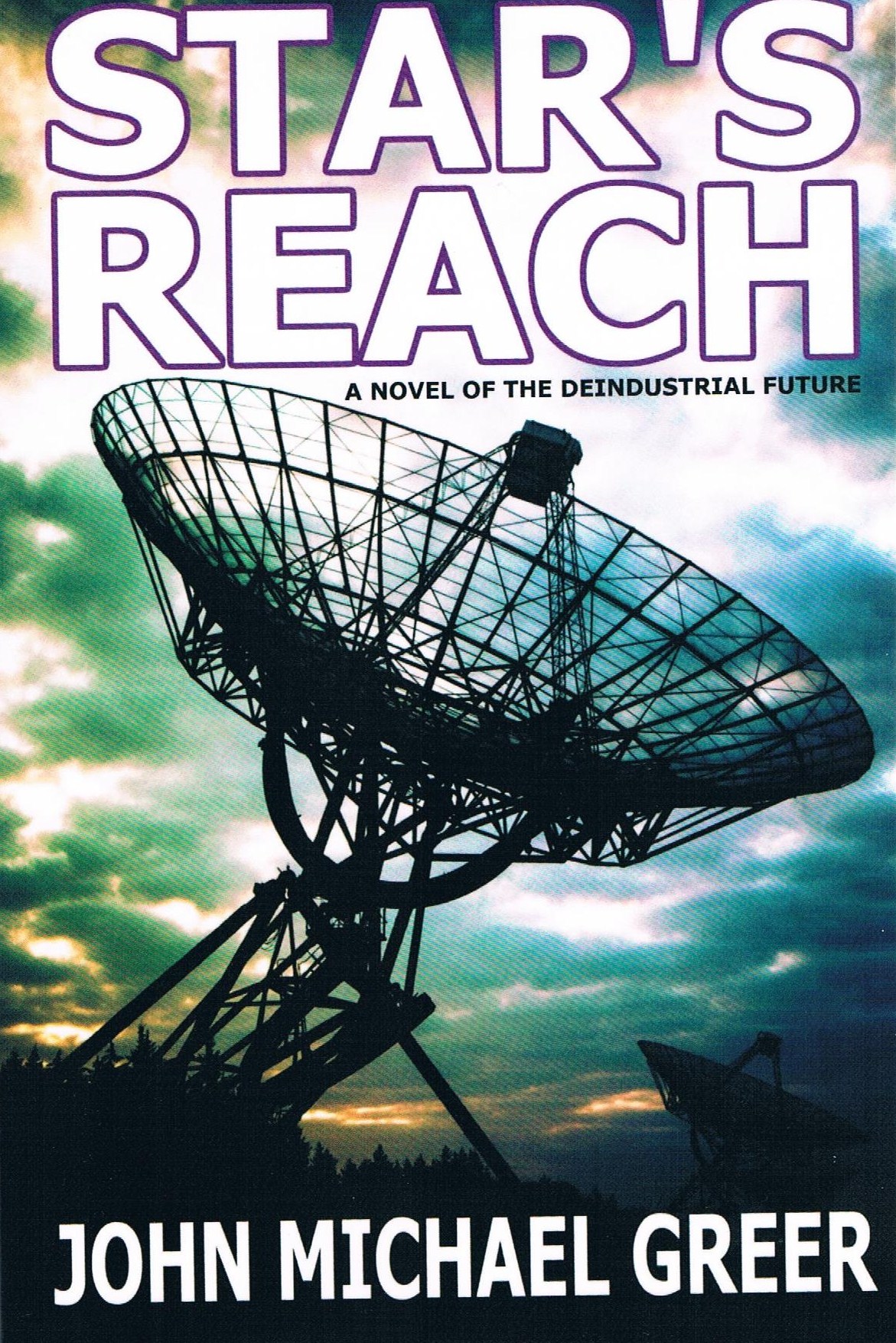 ...I thought about Deesee, the dead drowned city where the presdens of Meriga used to live before the lights went off and the seas rose up and the old world toppled into ruin like so many of the old towers I've helped salvage since I became a ruinman's apprentice.  I thought about the old world itself, and all the scraps and pieces of itself that lie scattered all over Mam Gaia's round belly, so that you can hardly dig in the ground anywhere in Meriga and not find something made back then...

Stid:  So far, this seems like familiar mid-future post-disaster territory.  I take it we're going to hear about taboos concerning the wicked "old world"... as in Brackett's The Long Tomorrow.  There, the naughty thing, the thing that wasn't allowed, was the building of cities.  No settlement was to be allowed to grow into a city - for that would bring back the bad old days.

Zendexor:  Greer's vision is subtly different.  His future Americans still have cities, of a sort, though smaller than before.  Chattanooga ("Shanuga"), population twenty thousand,

...has buildings seven and eight stories tall, with windows of glass salvaged from the ruins, and wind turbines turning slow and silent on top of them...

- and there you have the clue: for in Greer's scene, the unforgivable crime is to use fossil fuels.  "Mam Gaia" is not to be trifled with.  Get caught using fuels and you get buried alive.

That phrase "Mam Gaia", which at first I took to be a witty synonym for Earth, turns out to be the only remaining name for Earth.  It's repeated again and again to show how thoroughly the message has soaked in, that the planet's intricate balance must never be disturbed again.

So you can imagine, things are bound to get tense, when Star's Reach, the old world's centre for interstellar communication, is re-discovered, prompting the worry: if messages are again received from the stars, will society get tempted by new technologies to do forbidden things?

Stid:  This carries us way, way out of Old Solar System territory, doesn't it? 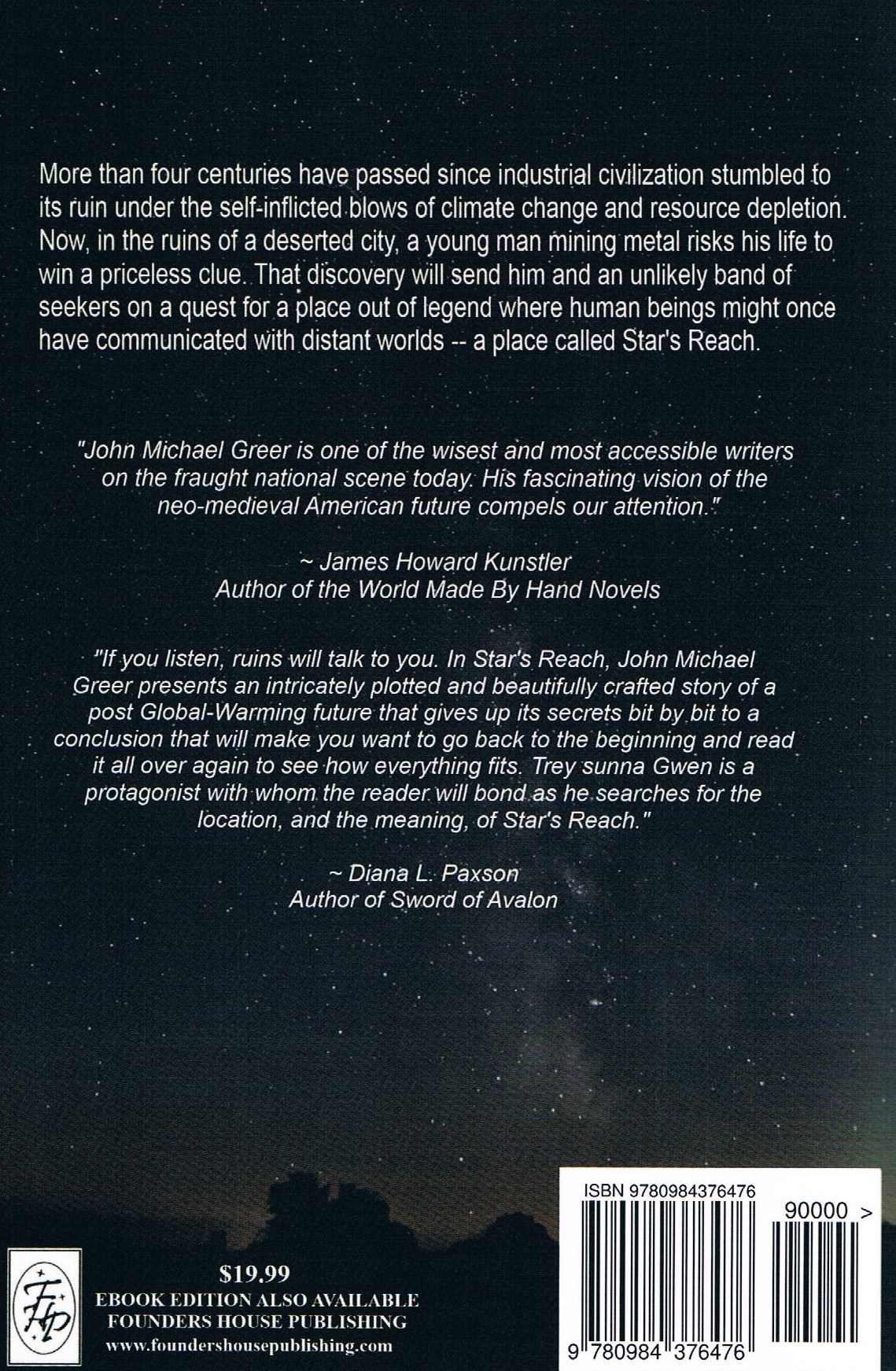 Zendexor:  Not a problem, actually.  True, the book covers some ideas which are outside this site's remit.  But the plot does not include any actual interstellar travel - doesn't even come close to doing so, for it's not regarded as a practical possibility.  Words and pictures are the only forms of contact between the stars.

No, what makes Star's Reach appropriate for discussion on this site is its view of mid-third-millennium Planet Earth.

I admit that this is not a balanced review; I am approaching the work from a particular angle.  An OSS angle:

The evolution of Earth in a "Brackett-Mars" equivalent direction.

Harlei:  Hey, Zendexor, that makes me prick up my ears!  I think you're on to something.  Why shouldn't Earth, which is bigger than Mars, accumulate at least as much sinister mystery, as time goes on... especially if conditions worsen and transport gets harder, increasing festering isolation...

Stid:  Before you smack your lips too loudly, Harlei, I want to voice my doubts, that enough time has passed for sufficient festering...

Zendexor:  Don't underestimate the rate that things can happen in America.  For a really fast bit of festering, look at Lovecraft's Dunwich which he referred to as "ridiculously old" (in The Dunwich Horror) - "ridiculously old" being a mere couple of centuries or so.  Well, the ex-USA of Greer's story has aged four centuries since the undated fall of the "old world".

We sense the ageing of history because continuity has to some extent been preserved.  What's old is not so much obliterated as re-used in new ways, blending old and new.  The walls of Shanuga

...were made of chunks of old freeways, cut up more or less square and mortared together.  That's what gets used for city walls all over Meriga, since there plenty of freeways to tear down and not much point in using them when the fastest thing we've got to move on them is an oxcart or a messenger's horse...

The same is true of cultural themes: they don't get obliterated, they get re-shaped, as the centuries pass, as what used to be shiny metal modernity gets cloaked with a shroud of spookiness - as in the ritual of touching the Robot Hand.

Rather than give away the details of that episode, let me quote from the obituary of a real-life roboticist, Victor Scheinman (1942-2016), designer (in 1974) of the first computer-controlled industrial robot:

...Victor's first contact with robots was traumatic.  Aged eight or nine, he was taken to see the science fiction film The Day The Earth Stood Still and became so frightened by the eight-foot humanoid Gort that he suffered nightmares for weeks.  As therapy, his father suggested that he build his own robots out of wood...

Stid:  A wise dad.  But anyhow I see your point - it goes to show that robots can be spooky already. And think of the Stepford Wives...

Zendexor:  Quite - the potential certainly exists, to wed modernity to old evil -

Stid:  Well, come to think of it, what else do you expect, since everything is becoming old at the rate of 24 hours a day!  There's bound to be a straight road from modernity to ancient mystery, given sufficient time.  Every crumbling old castle was young once.  An obvious truth.

Zendexor:  But endlessly fascinating, and in particular, it's something special to see America getting old: its place-names evolving, time distorting and eroding their syllables; the cacophonous metric system becoming euphonised into 'sennamees' and 'kloms'; freeways abandoned, canals renovated... whales swimming up the Mississippi... all sorts of details accumulating a picture of organic change.  That's the part of Greer's focus which I find relevant to this site.  Without needing to say so, he shows us Earth slowly becoming something analogous to the Brackett Mars: a dark-toned planet of hidden powers and secrets.

It would have happened otherwise, if the eco-catastrophe which ended the old world had been total.  But, more interestingly, it's partial.  Society is not primitive but subtly adapted to a low-energy economy and a diminished population.  Use of fossil fuels is banned but wind power provides a more intermittent energy supply.  Only a few computers are still in working order -

Stid:  Hmm, did you say "dark-toned"?  Sounds a pretty good set-up to me... a cure for smart-phone addiction, anyway.

Zendexor:  I'll concede that the full metaphorical Darkness of a Dark Age doesn't reign in this book; but to me it does have a certain twilight feel.  Of course, twilight can precede either night or morning.  The sense by the end of Star's Reach is that it precedes morning.  So in that respect my analogy with the Brackett Mars fails.  Greer's Earth maybe fails to keep up the sinister festering long enough for that.

See also the Diary entry, John Greer, Carl Jung and the Jasoomization of Earth which in turn refers you to John's article Men Unlike Gods.

For more on Earth's deepening culture layer see the Far Future page and the
Diary for 28th January 2017.